Revealed: How Captain Tom’s £33million was shared out to support those denied visits from loved-ones – from lung monitors to iPads and ‘wellness gardens’

From the provision of ‘wobble rooms’ and wellbeing gardens, and lung monitors and iPads, the extraordinary legacy of Captain Sir Tom Moore’s inspirational charity walk can be revealed today.

The £33 million raised by the war veteran, who turned 100 in April, has helped to improve the lives of hundreds of thousands of NHS workers and their patients.

Combined with a further £120 million donated by the public to NHS Charities Together, the organisation that benefited from Captain Tom’s generosity, spending has been focused on supporting those people denied visits from loved ones and tackling the mental health cost of the pandemic.

Sir Tom Moore, pictured, raised more than £33 million for the NHS ahead of his 100th birthday in April – providing an inspirational moment for the entire nation during lockdown

It includes thousands of iPads to allow patients to keep in touch with relatives, and counselling sessions for NHS staff cut off from their families as they battle Covid-19 on the front line.

Children at Great Ormond Street Hospital in London received activity packs of arts and crafts materials, puzzle books and games thanks to a £20,000 grant. Play specialist Florence Prince said: ‘It was such a great feeling to hand these out to patients to help them keep boredom at bay and to keep them smiling.’

Airedale Hospital in West Yorkshire is one of the sites for a wellbeing garden where medics can escape the stress of crammed wards. ‘It is a lovely place to go, take your PPE off and get out of that very stressful environment,’ said matron Angela McGarry. ‘I lost my father to Covid in April and I wish the garden had been there then for me to sit and reflect in.’

Joseph Lomax, 16, is one of hundreds with the respiratory condition cystic fibrosis who have been given a lung monitor to keep track of their condition from home. The handheld device, which monitors lung capacity, means the teenager does not have to make a 120-mile round-trip from his home in Northampton to see specialists in Oxford. ‘It took away a lot of worry and it meant we could… keep safe while I was shielding,’ he said. His mother Mandy added: ‘It was an absolute godsend.’ 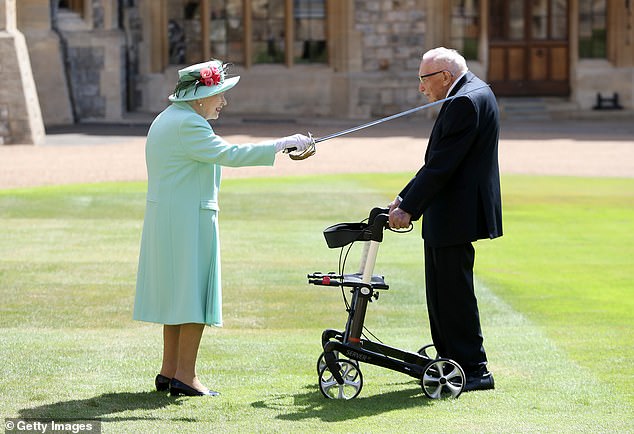 About £110 million of the more than £150 million raised by NHS Charities Together and Captain Tom has so far been pledged to more than 225 hospital charities. Before Captain Tom’s decision on April 6 to complete 100 laps of the garden at his home in Bedfordshire, NHS Charities Together had three employees – now it has 17. ‘We have been blown away by the public’s response to our Covid campaign and will be forever grateful to Captain Tom Moore who captured the imagination of the country,’ said chief executive Ellie Orton. ‘He proved that, no matter what age you are, you can make a difference.’

The charity does not aim to replace Government funding for the NHS, but to enhance care for patients and staff. ‘We want to make sure the money raised goes on to have a long-lasting legacy,’ Ms Orton added. ‘That is why we have focused on things like mental health because if the NHS workforce is happier then that will undoubtedly improve patient care and the experience for everyone. Our heroes in the NHS have looked after us, so now we must look after them and make sure there is long-term provision to help staff with their mental health and deal with things like post-traumatic stress disorder.’

Captain Tom was knighted by the Queen in July and has since released an autobiography. He was also awarded GQ’s Inspiration of the Year award after becoming the magazine’s oldest ever cover star.