EXPRESS INFORMER > News & Politics > How can you make your marriage sparkle? Do the dishes!

How can you make your marriage sparkle? Do the dishes! Couples who voluntarily carry out chores for each other have a stronger bond, research suggests

By Pat Hagan for the Daily Mail

An expensive piece of jewellery or a weekend break might seem like a safe bet to please your partner.

But the real secret to a happy marriage could be doing the dishes for them – without having to be nagged into it.

Men or women who voluntarily do things to benefit their partner – such as the washing up – not only have stronger relationships but also feel better about themselves for doing so, a study revealed.

Previous research has shown washing up remains a major source of conflict between couples.

Women who do most of it reported more arguments, less relationship satisfaction and worse sex than those whose partners did more.

The study from Wake Forest University in the US found a direct link between ‘pro-social behaviour’ – such as putting partners’ desires ahead of our own – and closeness and self-esteem.

Psychologists screened 120 adults aged 19 to 62 for levels of self-esteem and relationship satisfaction, then asked them to spend a week making more ‘partner-satisfying decisions’ such as doing the dishes or scrapping trips to the pub to spend more time in loved ones’ company. 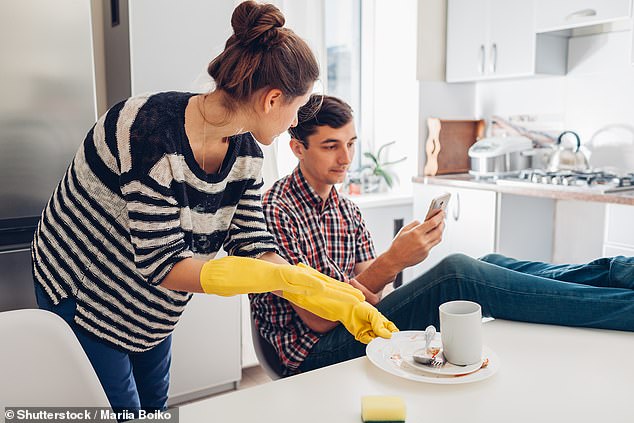 Women who do most of the washing reported more arguments, less relationship satisfaction and worse sex than those whose partners did more

The results, published in the journal Personal Relationships, revealed just a few days of self-sacrifice not only brought couples closer together but boosted volunteers’ psychological wellbeing.

The researchers said acting in others’ best interests ‘has even been linked to a lower mortality rate in older adults’.

In a report on the findings, the researchers said: ‘Acting in ways that promote another’s best interests has a variety of benefits for the helper, including better mental well-being, feeling happier and being in a more positive mood.

‘It has even been linked to a lower mortality rate in older adults.’

London-based psychotherapist Leila Collins said this kind of self-sacrifice is crucial for a successful relationship.

‘It goes a long way to showing the other person you are prepared to put their needs and wants before your own.

‘But that effort needs to be acknowledged, even with a simply thank you, to avoid resentment.’

Rows over who does the washing up are one of the main sources of conflict within a relationship, according to a 2018 study.

It found women who do the bulk of it reported more arguments, less relationship satisfaction and even worse sex than those whose partners shared the burden.