In just three months, the high street giants have pocketed an eye-watering £16 billion from their so-called ‘net interest margins’ — the gap between what they charge borrowers and pay savers.

This compares to just under £13 billion for the same three-month period in 2021. The damning figures are buried in the just-published banks’ reports for the three months from July to September.

Don’t mind the gap: High street banks have squeezed £19bn from net interest margins – the gap between what they charge borrowers and pay savers – in the last 12 months.

And their takings are likely to swell further, as the Bank of England is expected to increase the base rate by 0.75 percentage points tomorrow, taking it to 3 per cent.

Lenders have been quick to hike mortgage deals to 14-year highs on the back of rising interest rates.

Yet they have passed on next to nothing to loyal savers. The worst offenders continue to pay a paltry 0.2 per cent on popular savings accounts while charging homebuyers as much as 6 per cent to lock in a mortgage offer.

The average rate on easy-access savings accounts is still just 0.4 per cent, up from 0.1 per cent in January, according to Bank of England data.

Laura Suter, of AJ Bell, explains: ‘Banks are very keen to protect their profits, which comes at a cost to UK households.

Britain’s big five banks — Barclays, HSBC, Lloyds, NatWest and Santander — have all increased the gap between what they charge borrowers and pay savers, known as their net interest margin, according to the latest quarterly results published last week.

By widening this gap, they boost profits. Challenger banks tend to offer much more competitive rates than the big household names because they need to encourage customers to switch to them. 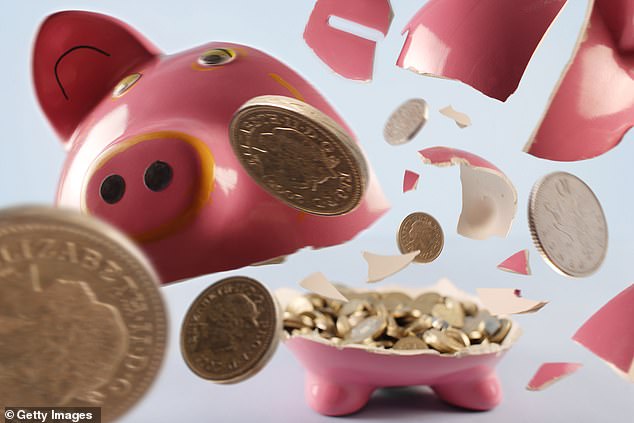 Discrepancy: Lenders have been quick to hike mortgage deals to 14-year highs on the back of rising interest rates but passed on next to nothing to loyal savers

Major banks have little incentive to raise rates as they already hold trillions of pounds of savers’ cash.

Lloyds Banking Group, which includes Halifax and Bank of Scotland, reported a net interest margin of 2.98 per cent in the three months to September, up from 2.52 per cent in the same period last year. The income it took from this gap increased from £2.85 billion last year to £3.39 billion.

Meanwhile HSBC, which only reports its global figures, saw its margin grow to 1.57 per cent in the period from 1.19 per cent last year, raking in £7.48 billion.

In total, the bank results showed they netted an extra £3.32 billion from the gap between the interest they charged and received from customers between July and September compared with a year ago.

There have been calls for the Government to impose a windfall tax on banking giants’ profits to help cover a £40 billion hole in the UK’s public finances.

The base rate has risen seven times in the past 12 months to combat rising inflation.

But the rates offered on savings accounts are still lower than the dark days of 2009. In March 2009 the base rate was 0.5 per cent but the best easy-access savings accounts paid as much as 6 per cent, according to data from analyst Moneyfacts.

Last December, the rates all the big banks paid on easy-access accounts was 0.01 per cent. At the time the base rate was 0.1 per cent. Since then, it has surged to 2.25 per cent. 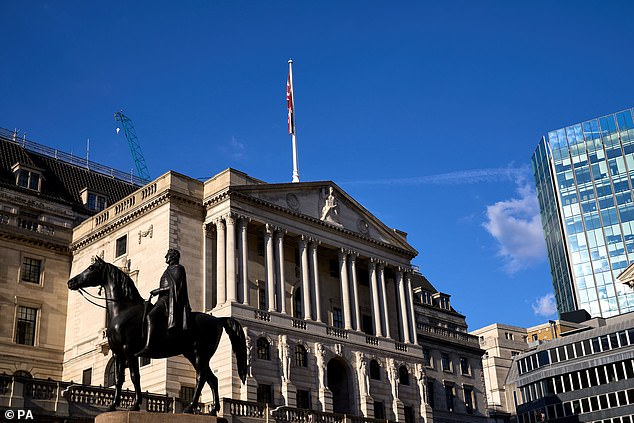 Hike: The Bank of England (pictured) is expected to increase the base rate by 0.75 percentage points tomorrow

Barclays pays a paltry 0.3 per cent on its instant-access cash Isa for any sum below £30,000, while Lloyds pays a flat rate of 0.4 per cent for its Instant Cash Isa.

By contrast, smaller banks and building societies have pushed up their rates. Top online account rates include Al Rayan Bank at 2.81 per cent while Aldermore, Hampshire Bank, RCI Bank and Secure Trust also offer 2 per cent.

Laura Suter at AJ Bell says: ‘Until savers vote with their feet and move their money to accounts with better rates, the big brand names don’t need to offer savers more attractive deals.’

Over the past two months, banks have pulled thousands of mortgage deals and re-advertised them at much higher rates.

Rates have soared from an average of 2 per cent a year ago to nearer 6 per cent, in some cases hiking repayments by as much as half. The last time mortgage rates were higher than 6 per cent was at the start of the financial crash in 2008.

NatWest was offering first-time buyers rates as low as 1.6 per cent last year. But now, someone buying a home at the UK average house price of £296,000 with a 10 per cent deposit for a 25-year term would be offered a rate of 6.54 per cent to fix for two years with NatWest.

A spokesman for Santander says: ‘We continually review our products in light of market conditions and make changes as appropriate.’

A NatWest spokesman adds: ‘We continue to support our customers to build their financial capability through savings. We’ve seen a rise in customers saving this year.’