One of the more heartwarming stories of 2020 was footballer Marcus Rashford’s campaign on free school meals which prompted a Government U-turn to provide them to disadvantaged children over the holidays.

Now, a fascinating series of photographs has revealed the fight for free school meals dates back more than a century to 1907 when Bradford Council became the first local authority to provide them to children.

The pictures were found by former headteacher Stephen Goodfellow in a box with glass photographic slides, a cotton glove and a business card, in a collection store at the National Science and Media Museum in Bradford.

A typical menu for the children in West Yorkshire in one week in 1912 started off with potato and onion soup followed by wholemeal cake on Monday, and hashed beef and savoury balls then rice pudding on Tuesday.

Cheese pudding, peas and gravy followed by stewed fruit was on Wednesday, shepherd’s pie and pudding with sago on Thursday and fish and potato pie with peas and parsley sauce followed by rice and sultanas on Friday.

Children stand to attention for a photograph at White Abbey Methodist School in Bradford in October 1907 next to their Scotch Barley Broth lunch in 1907, which had been cooked at the nearby Green Lane School in the West Yorkshire city 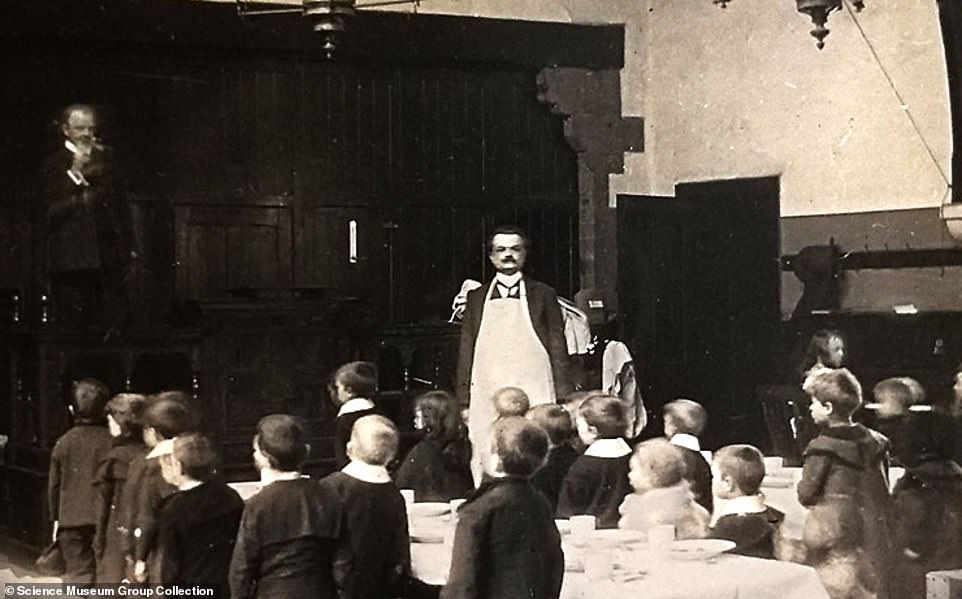 Children stand at White Abbey Methodist School in Bradford in front of Green Lane School’s headmaster Jonathan Priestley, the father of author JB Priestley, who served them the free meals when the scheme launched in October 1907

It came amid a backdrop of significant concerns building towards the end of the Victoria era about the health and wellbeing of the poor, who were expected to provide labour and troops to protect Britain and its Empire.

Bradford had been a huge growth area during the Industrial Revolution, specifically through the wool industry, but there were concerns over many of the poor being unfit to serve in the Boer War because they were underweight.

What was the typical food menu for schoolchildren?

Schooling pioneer Margaret McMillan was among those who lobbied for the 1906 The Education (Provision of Meals) Act, with her main argument being that it was a waste of money to try to educate starving children.

This also came in the context of a rising workers’ rights movement and the concept of ‘rearing an Imperial race’ amid fears the Empire might fall apart if adults had been poorly fed as children.

Research established 3,000 children a day needed to be fed in Bradford, with the Independent Labour Party, founded in 1893, being particularly behind the idea of feeding pupils, but they were a minority on the council.

Mr Goodfellow told MailOnline: ‘The Conservatives eventually came round to the idea, but for a large part of the time, they were in the minority. Real opposition to using local funds, certainly education funding, for meals was the Liberal Party.

‘They believed that where it was absolutely necessary because the parents were unable to provide, then charity should provide, but where people were undeserving, they were undeserving, so why should the majority of people pay for meals? You had this kind of deserving and undeserving poor.’

By the early 20th century, Bradford was seen as a very progressive city in education, with medical inspections and baths in school – and later promoted the idea of open-air schools.

Labour MP Fred Jowett, elected in 1906 but previously on the council’s education committee, was a major driving force behind reform – including making Bradford the first council provider of free school meals. 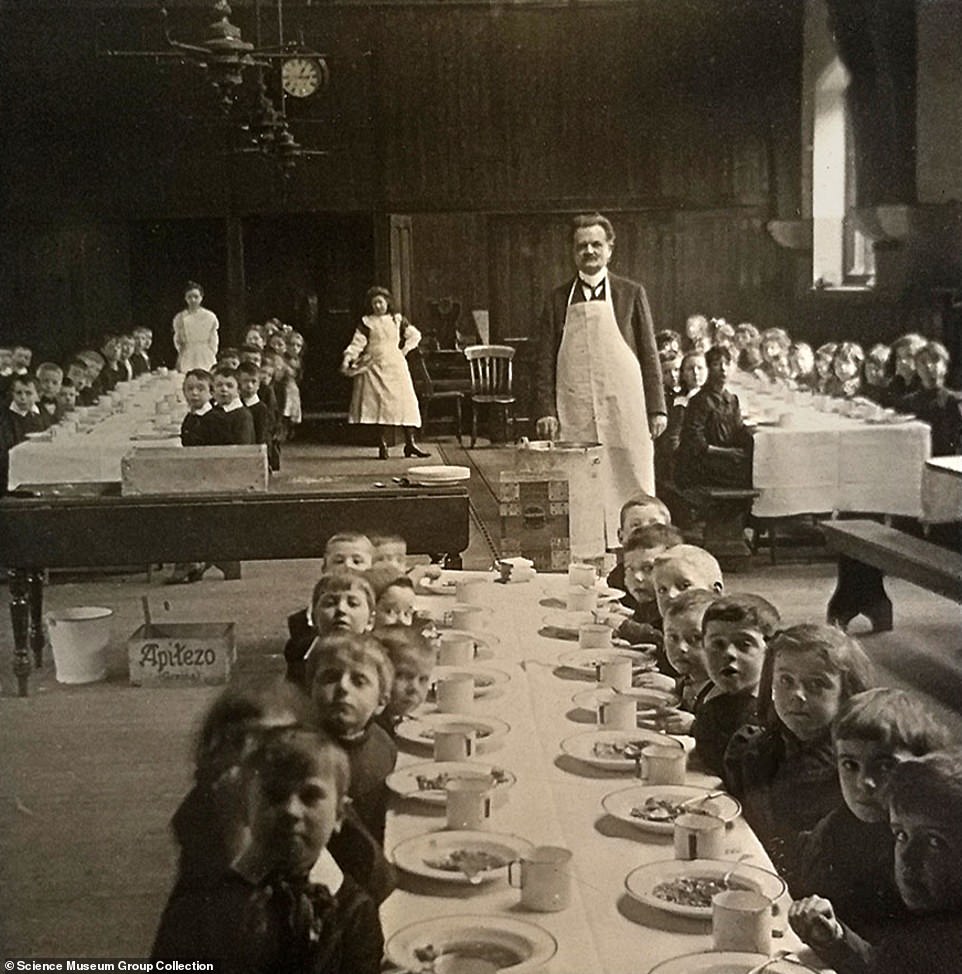 Dinner is served to children at White Abbey Methodist School in Bradford by Jonathan Priestley in 1907. The pictures were part of a collection of travelling magic lantern slides which were shown to audiences in an early form of documentary 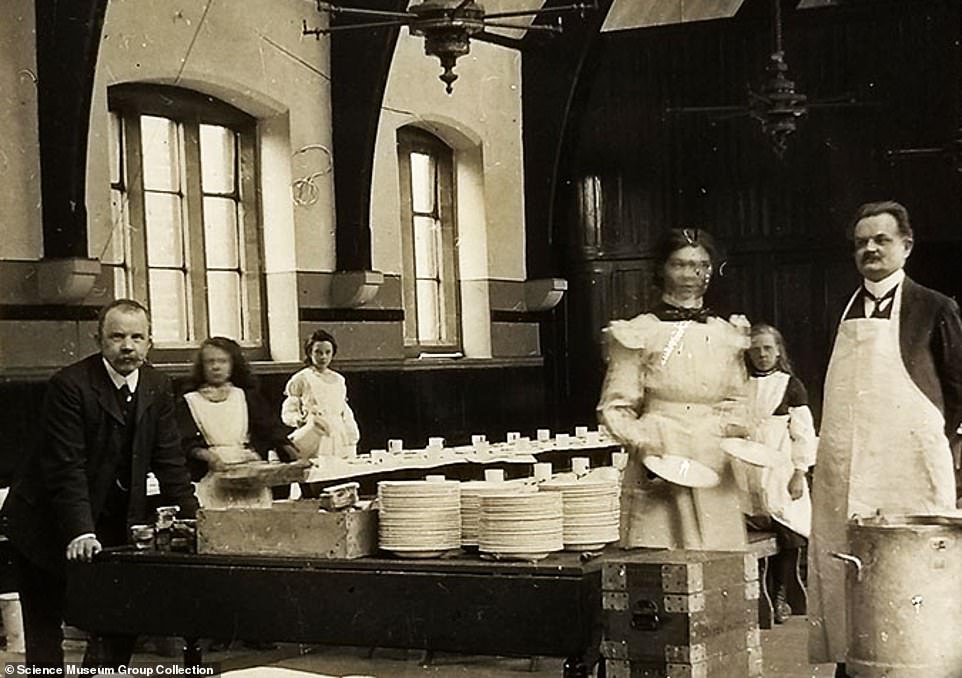 Staff and pupil monitors stand ready to serve the first school meal in Bradford in 1907. The first kitchen was set up at Green Lane School, with heat from the boilers of the baths used for cooking meals which were sent around the city

But until the early 20th century, meals in state schools – officially known as ‘public elementary schools’ – could only be provided by charity or by the ‘Poor Law Guardians’, who also ran the dreaded workhouses.

There was too much demand for charities to fulfill, while the Poor Law Guardians only provided food for the very poorest children, which was said to have been ‘a bun, a banana and a beverage’.

The reference to a ‘beverage’ was ridiculed at the time, with Mr Goodfellow saying: ‘The Board of Guardians was feeding children but also trying to prosecute parents of children and reclaim money if they felt they had it.

‘The food supplied was in the form of a bread bun, a banana and a cup of milk. The bread was allegedly quite stale because they were buying it the cheapest they could, and the milk proved to be half milk half water. 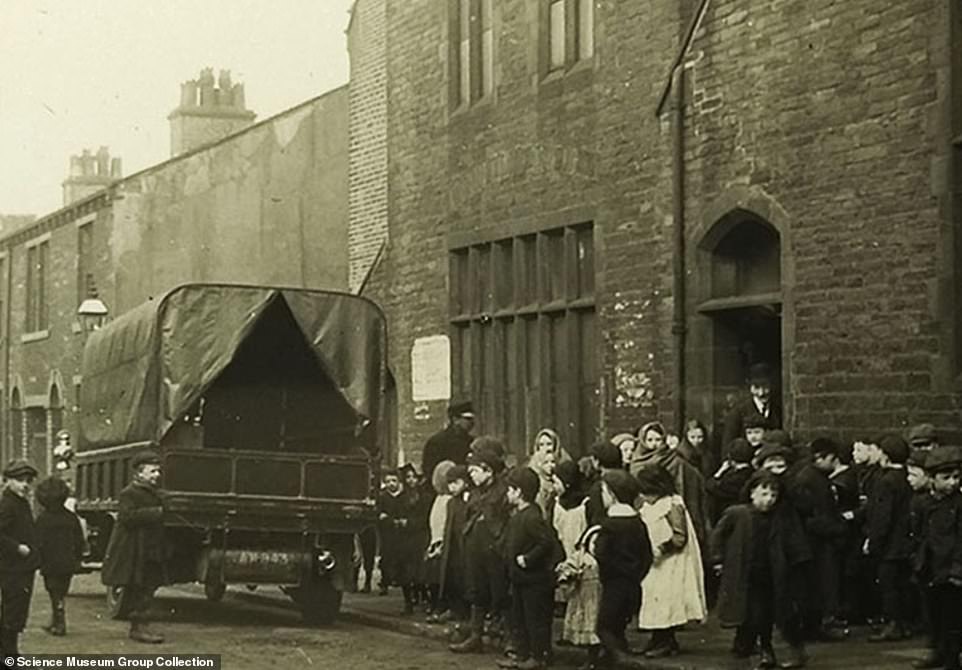 Food is delivered to a school dining room in Bradford by an adapted council lorry in insulated containers which kept it hot. The provision saw Bradford Council become the first to implement powers under The Education (Provision of Meals) Act 1906

‘When challenged on this, they said the milk wasn’t intended as food, it was intended as a beverage. This was ridiculed as them providing a ‘bun, a banana and a beverage’.’

In 1906 the law called The Education (Provision of Meals) Act was brought in, meaning councils could spend their funds on feeding children, and Bradford Council was the first to use the new powers.

Officials began with a ‘feeding experiment’ to work out how school meals could help ‘necessitous children’, but within a few months there was a full system organised for cooking, distributing and serving meals around the city.

The first kitchen was set up at Green Lane School, with heat from the boilers of the baths used for cooking meals which were sent around the city, including to White Abbey Methodist School, where the pictures were taken. 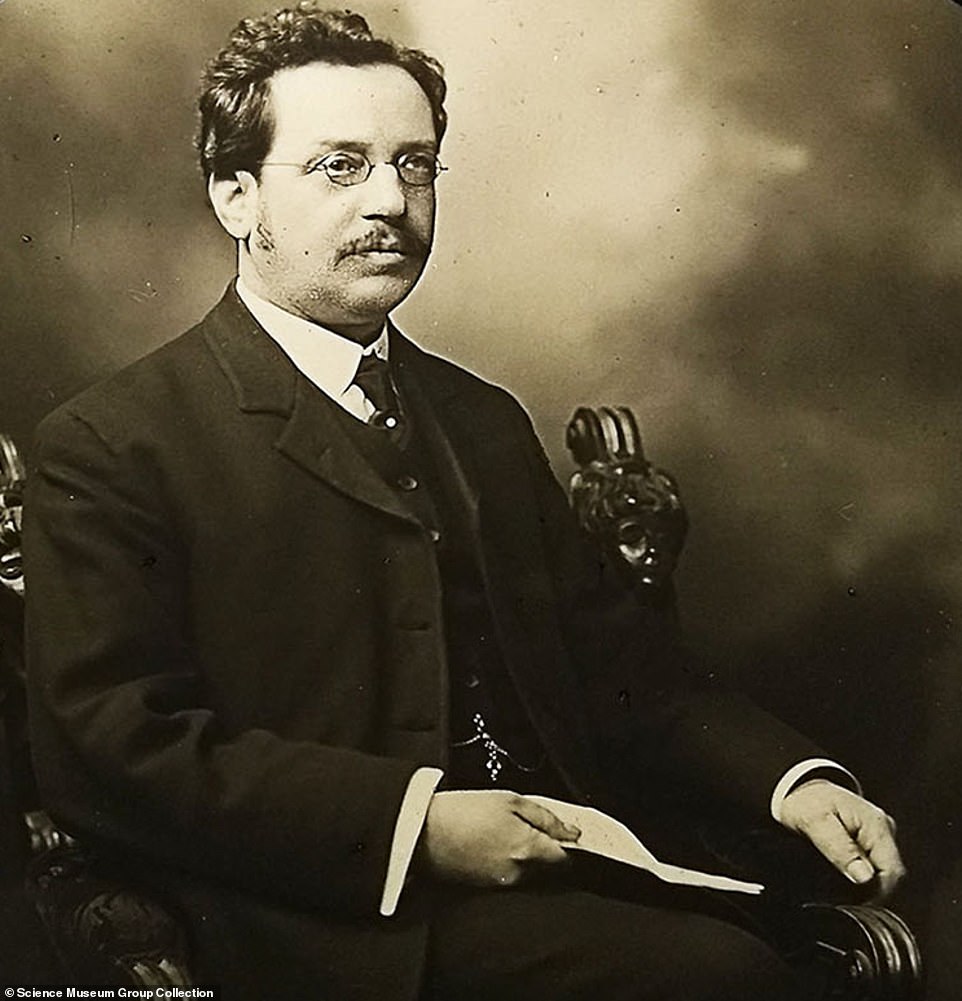 Labour MP Fred Jowett, elected in 1906 but previously on the council’s education committee, was a major driving force behind reform – including making Bradford the first council provider of free school meals

Shortly before the meals were brought in in 1907, Marianne Cruff, superintendent of domestic studies, devised scientific recipes with appropriate amounts of carbohydrates, protein, salts – now referred to vitamins – and fats.

Mr Goodfellow said: ‘The menus were rigorously devised for dinner to be of high nutritional content. They would also analyse the cost, because it was public funds.

‘Prior to the mass introduction, there was also a feeding experiment in which about 40 children were selected from one school particularly needy of feeding and they were put on this special diet.

‘There was also a control group that wasn’t fed, and measurements of weight gain and height were made. They were compared with a fee-paying school in Liverpool and shown to be smaller, lighter and less well nourished. 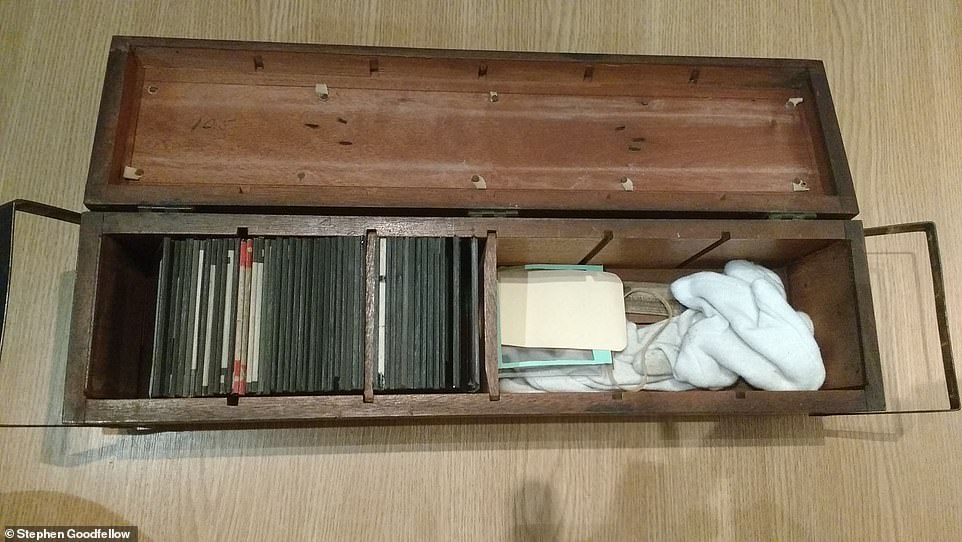 The pictures were found in a box with glass photographic slides, a cotton glove and a business card at a museum in Bradford. Lots of the images were labelled ‘T. Throup, Publisher, Bradford’ and numbered to form part of a magic lantern show

‘They made 17 different recipes – two meals a week were vegetarian, two contained meat and Friday was also fish and potato pie. So we had four weeks with two veg, two meat and one fish meal.’

He added that similar changes were happening around Europe at the time, and people from abroad visited Bradford to see how they were organising the rollout of the scheme.

Mr Goodfellow, who works as an object handling and events volunteer at the museum, said of the photos: ‘They truly are a mystery. They were an anonymous donation, nobody knows who donated them.

‘They were looked at, some of the slides. Just kind of left and unrecognised until I came along and they started talking to me. It was a great opportunity for me as a volunteer.’ 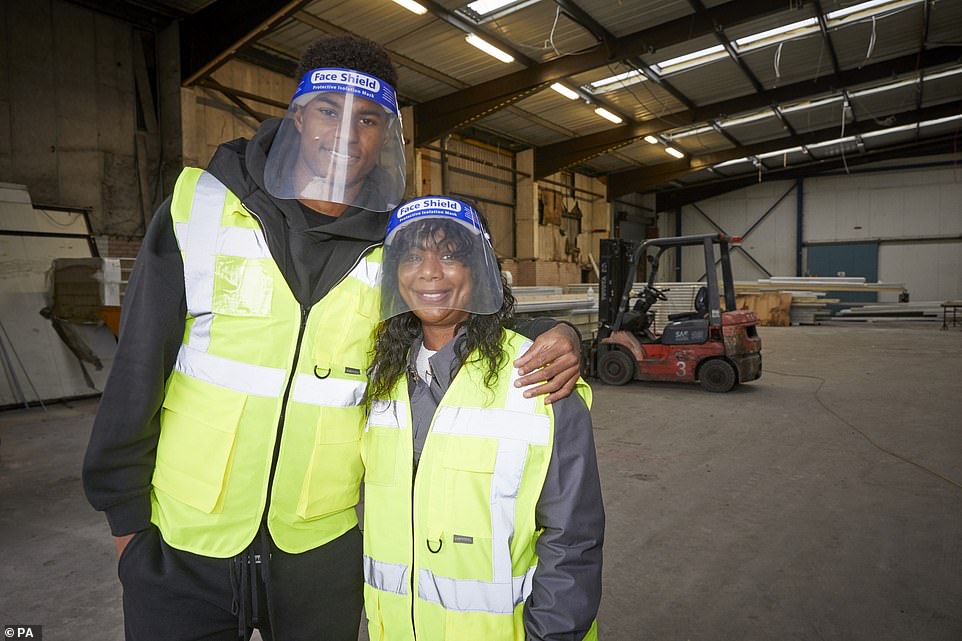 Mr Goodfellow said lots of the pictures were labelled ‘T. Throup, Publisher, Bradford’ and numbered to form part of a magic lantern show, an early form of documentary which was taken around to be shown to different audiences.

He also pointed out an interesting link to Bradford-born author JB Priestley, whose father Jonathan Priestley was headmaster at Green Lane School where the first kitchen was set up and who can be seen in the photographs.

In 2020, Rashford drew praise for highlighting the issue of child food poverty and his campaign resulted in the Government back-tracking to announce free meals would be provided to disadvantaged children in the holidays.

The 23-year-old England and Manchester United star was also awarded an MBE after forcing a Government U-turn on free school meal vouchers. He also launched his own book club to encourage disadvantaged children to read.

The National Science and Media Museum in Bradford is open Wednesdays to Sundays. Click here for details