When Harry Cayton started looking into the dysfunction at the College of Dental Surgeons of B.C., he discovered something alarming, and the problem persisted even after a major shift in leadership.

“A concern for the well-being of dentists rather than a single-minded focus on patient safety and public protection is still a part of college culture,” Cayton wrote in an explosive report released this week.

As a health regulation expert from the U.K., appointed by the province, Cayton’s first focus was the dentists’ college, which had been the subject of numerous complaints over the years.

But as he looked beyond dentists, to all of the 20 colleges regulated under the Health Professions Act (HPA), he saw this wasn’t an isolated issue.

“There is a lack of relentless focus on the safety of patients in many but not all of the current colleges. Their governance is insufficiently independent, lacking a competency framework, a way of managing skill mix or clear accountability to the public they serve,” Cayton writes.

In his blistering 100-page report, Cayton cites a litany of problems plaguing health regulation in B.C., saying the regulatory colleges lack transparency, are fragmented and fail to put patients first.

In fact, Cayton, the former chief executive of the U.K. Professional Standards Authority, said health regulation in B.C. is too broken to be mended, and suggested the system needs an entire overhaul.

His findings do not come as a surprise to Jay Robinson, a Burnaby chiropractor and the former president of the B.C. Chiropractic Association. He’s experienced these same problems within his own professional college, and he agrees “significant changes” are needed.

“What is clear is that based on the recent past, British Columbians, and the health care professionals themselves, deserve better,” Robinson wrote in an email.

The case of the rabid dog remedy

None of Cayton’s concerns are new.

B.C.’s ombudsperson expressed some distress about the state of regulation a full 16 years ago, writing “the professions do not appear to have fully accepted or understood what it means to act in the public interest.”

Some of these ongoing problems might be baked into the HPA, Cayton says. As it stands, the word “safety” appears nowhere in the 15 objectives for colleges laid out in the act.

One particularly troubling example is the case of Anke Zimmermann, the former Victoria naturopath who drew global attention after treating a small boy with a homeopathic remedy.

Cayton says the story demonstrates “an example of the weakness in public protection of fragmented self-regulation.”

It was the B.C. Naturopathic Association that stepped up and filed a complaint against Zimmermann. Cayton writes that this turn of events made it look like a professional association, whose mandate is to act on behalf of its members, was more committed to public protection than the college, whose legal mission is exactly that.

The end result was equally problematic, the report says.

When Zimmermann agreed to give up her licence, the college posted just a brief statement saying she was resigning because the college’s rules “made it difficult for her to serve her patients with her integrity.” No further action was taken against her.

“This renders the purpose of professional regulation meaningless. If it is a defence to say after the event, ‘I didn’t agree with the standards,’ then both registration and standards are pointless,” the report says.

That case also cuts to the heart of a second major concern — a lack of transparency from the colleges, particularly when it comes to complaints about health-care professionals.

“The HPA builds secrecy into the complaints process. In doing so it protects registrants but not the public. Only a small number of outcomes from complaints are published,” Cayton writes.

“It should be recognised as a fundamental right of a patient to know about their healthcare provider’s competence and conduct.”

As it stands, a large number of public complaints are settled through “consent agreements,” wherein health-care professionals admit they’ve done something wrong and agree to fines and reprimands.

When that happens, those agreements are only made public if they’re about what the HPA describes as a “serious matter.”

Even when Avtar Jassal, the former vice-chair of the College of Chiropractors, received a fine and a reprimand last year for spreading anti-vaccination misinformation, nothing was posted on the college’s website.

Cayton’s vision for the future would require drastic changes, including a full replacement of the HPA. Though he offers suggestions for possible reforms to the act, he makes it quite clear that edits and amendments won’t cut it.

“A complete overhaul of the way health professional regulation is conceived and delivered is required,” he writes.

Cayton proposes a single register for every member of every health profession in B.C., held by a new, independent body that would be responsible for investigating complaints and disciplining wrongdoers. 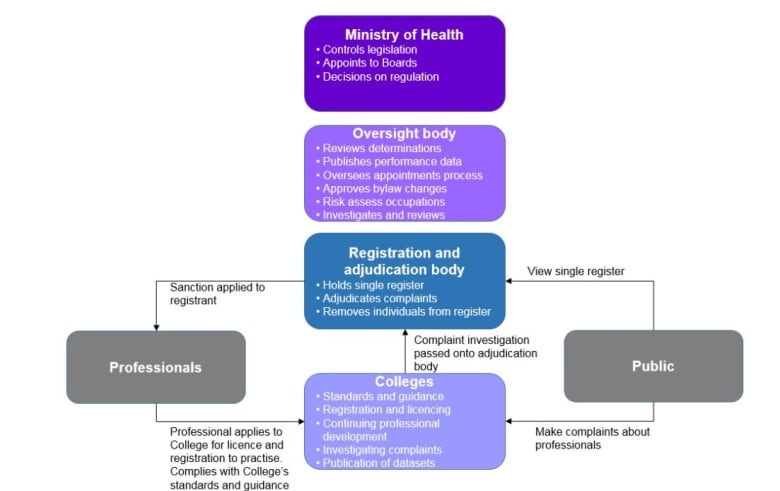 The colleges would still exist — though there wouldn’t be as many of them — but their main responsibilities would be to set standards of practice and to license professionals. The colleges would all agree to a single code of ethics and conduct.

Sitting above all of this would be a new oversight body, replacing the current Health Professions Review Board, with expanded powers. That would include assessing the risks of harm to patients posed by certain professions and determining whether they should be regulated.

Representatives of B.C.’s health-care colleges who responded to emails from CBC on Friday said they welcomed Cayton’s report and looked forward to improving the current regulatory regime, but did not offer any further comment. The College of Dental Surgeons of B.C. says it’s working on a plan to implement all of Cayton’s recommendations specific to its governance.

Health Minister Adrian Dix has said he will be reviewing Cayton’s recommendations.