Eighty years ago in 1940, a dark cloud of suspicion verging on paranoia hung heavily over the British Isles. The country was at war with Nazi Germany and Hitler’s forces were camped just across the English Channel.

Invasion seemed inevitable and imminent, and the country went into a form of lockdown, with barbed wire on the beaches, roadblocks, no-go areas around the coast, lights out, blackened windows and curfews.

A jittery population saw enemies everywhere — traitors, closet Nazis, an underground army of infiltrators known as the Fifth Column, all coming out of hiding to stab them in the back.

In this atmosphere of anxiety and panic, thousands of self-important Captain Mainwarings and bossy Air Raid Warden Hodges seized the opportunity to strut around, poking their noses into private lives, pulling everyone into line. ‘Don’t you know there’s a war on?’

A generation or so later, the brilliant television series Dad’s Army captured the gentle comedy of that situation. But, at the time, there was precious little to laugh about — as a new book, Beating The Nazi Invader, by historian Neil Storey, shows.

Prepared: A sergeant of the Dorking Home Guard in Surrey, England cleans his gun while his wife knits before leaving home to go on parade, December 1940

What sticks in the throat even now is quite how little had been done in the preceding years to protect our nation from its potential enemies, for, since 1935, the German presence on these islands grew unchecked.

He caught a glimpse of Hitler while in Berlin for a match against Germany in 1938 and turned to his team mate, the legendary Stanley Matthews, to say: ‘Stan, I’m just a working lad from Leeds. I know nowt about politics and the like. All I know is football. But t’way I see it, yon ’itler feller is an evil little t**t.’

What was obvious to Bert Sproston, however, seemed to escape large chunks of the population. Among national leaders, far too many were willing to take Hitler’s side.

Into this vacuum of ambiguity the Nazis infiltrated their vast resources of spying. And Britain welcomed them with open arms.

The Hitler Youth were allowed to parade down Whitehall alongside their hosts, the fascist Britannia Youth Movement, and dip the swastika flag at the Cenotaph.

The unsuspecting Boy Scouts naively joined forces with openly Nazi visitors from the Third Reich in sing-songs round the camp fire, in the cause of smoothing international relations.

The Hitler Youth even ran cycle tours around Britain, their favourite itineraries just happening to include strategic ports such as Harwich, Grimsby, Dover and Southampton and industrial centres like Birmingham and Sheffield.

This was too much for the Daily Herald newspaper, denouncing them as ‘spyclists’ and quoting a German magazine aimed at readers travelling abroad: ‘Pay attention and memorise all the country you pass through. Get into your head all the landmarks like steeples and towers and all fords and bridges, and acquaint yourself with them so you will be able to recognise them at night . . . The time may come when you will be able to serve your country by this knowledge.’

Britain was soon crawling with undercover German agents hoovering up any scrap of intelligence they could about cities, towns, transport, communications, industries, utilities, religious, social, academic and political organisations and individuals.

Meanwhile, other agents monitored Germans working or studying in Britain, strong-arming them into remaining loyal Nazis by threatening retribution on their families.

MI5 did its best to contain this illegal activity but it was massively under-resourced. As late as 1939, it had just 36 active officers to cover the whole country, and when numbers grew and their offices at Wormwood Scrubs Prison were bombed, they decamped to a new HQ at Blenheim Palace where they had a measly two telephones.

Most days would find Claude Dansey of Britain’s Secret Intelligence Service lunching at the Savoy, where MI5’s director of counter-espionage Guy Liddell held meetings over cocktails in the American Bar. Just across town, senior Nazi spooks favoured Claridge’s in Mayfair as their base.

As for the Dorchester on Park Lane, its managing director, Anton Bon, was notorious for his pro-German sympathies. Stories were rife of him tapping phones and breaking into guest’s locked desks.

MI5 pronounced the Dorchester ‘a nest of spies’ but its hands were tied because Bon was a Swiss national.

Nowhere was safe from prying German eyes, not even the boudoirs and dining rooms of the rich and famous.

The 25,000 German girls employed as maids in private houses were under orders to send home any useful gossip they picked up, and the British upper classes — who never deigned to notice the staff — provided rich pickings with their chatter.

Academia also leaked like a sieve. There were large numbers of German students at British universities, some of whom were undoubtedly studying much more than just their books. A Gestapo agent, it was rumoured, operated in the London School of Economics.

As for the many foreign media correspondents buzzing round London, they were obvious suspects.

Dr Rudolph Rosel, supposedly a journalist with the Anglo-German Information Service, was, in reality, sitting in a Westminster office compiling an index of thousands of Britons, their political leanings and their susceptibility to propaganda.

For five years, every titbit of information was sent to Berlin to be collated into a guide to Britain, produced for the would-be invasion forces in August 1940 — the invasion that never came, of course.

There were city plans, road maps of 160 British towns and maps of the telephone system and radio installations, the electricity grid, waterways and transport systems. There was even a booklet of English place names and how to pronounce them.

In a top-secret file were internal plans of Buckingham Palace and photographs of the Royal Family, to be used by a snatch squad of 500 parachutists who would drop into the palace grounds and seize the King, the Queen and Princesses Elizabeth and Margaret as hostages.

(Such plans would have been useless, however. What German spies failed to suss out was that in wartime the royals lodged not in London but at Windsor Castle.)

With the outbreak of war in 1939, the greatest fear became the prospect of enemy parachutists dropping behind the lines to cause mayhem as a preamble to full invasion.

There was good reason because this was what had just happened when the Germans conquered Holland, as British newspapers were quick to warn their readers.

Vivid reports described how the invasion there began with parachutists dressed as Dutch soldiers and civilians dropping out of the sky ‘like a vast flock of vultures’, some sneakily in women’s clothing or disguised as priests.

Storey doubts any of this was true, but that didn’t matter; people in a nervy Britain believed the threat and reacted accordingly. Vigilantes armed themselves and went out to look for parachutists and saboteurs. 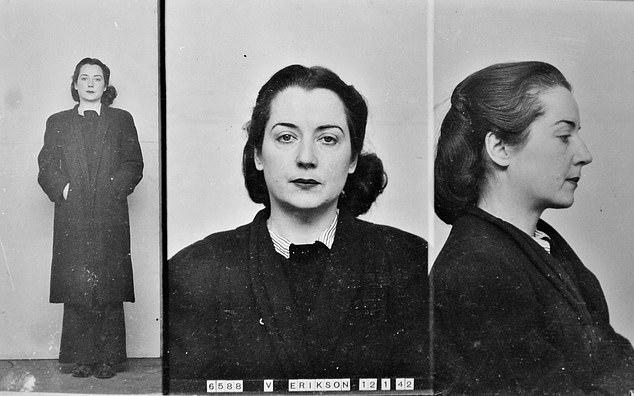 Enemy agent Vera Schalberg aka Erikson during her captivity in Britain, January 1942. She was  set down from a sea-plane on the Moray Firth coast in Scotland along with Karl Drücke. They walked to a nearby train station and asked the name of the station — a strange question, which made the stationmaster suspicious. He called the police.

This prompted the government to create the Local Defence Volunteers, the forerunner of the Home Guard. In 24 hours, 250,000 put their names down and Dad’s Army was born.

Paranoia soon took hold, with thousands of reports of Germans on the loose. There were alleged sightings of ‘nuns’ with hairy legs hiding guns inside their habits (never eye-witness accounts, strangely, but usually sourced to ‘a friend of a friend’).

It was all pie-eyed nonsense, but Storey believes this fiction was started as a deliberate rumour to keep the people vigilant when invasion was a distinct possibility.

MI5 was inundated with tip-offs. Many were crazy, such as the ‘suspicious’ character living on a house-boat in Cornwall whom locals got it into their heads was planning to float mines down the river.

Or the bee-keeper whose neighbours reported him for supposedly using his bees as pigeon-like couriers for messages to the enemy.

Canadian troops stationed in Britain arrested a man because of his foreign accent and called in MI5, who rushed to the scene and declared him to be . . .Welsh.

A lady with an over-active imagination wrote in to warn about ‘alien’ ice cream sellers — Italian presumably — trying to poison soldiers.

In Birmingham and Liverpool, hundreds of busybodies sent in earnest reports of strange flashing lights in the sky coming from the ground — surely signals to enemy bombers directing them to their targets.

They turned out to be the flashes from anti-aircraft guns and the reflections of searchlights on barrage balloons.

MI5 even found itself investigating a ‘collaborator’ farmer who had allegedly arranged his chicken coops in the shape of a swastika.

Some malicious folk seized the opportunity to turn in a neighbour they had a grudge against or who was deemed ‘a bit odd’. This was no time to be an eccentric or a loner.

Some of the wildest scares concerned white powder after air raids. Could it be deadly mustard gas in powder form? No. MI5 investigated and drew up a lengthy list of airborne objects handed in as suspicious, among them chalk, pellets of starch, dust, sand, clay, fungus, cabbage leaves and an ornament from a lady’s hat. It was nothing to worry about. Except that’s not how paranoia works. The objects were deposited by Fifth Columnists and Nazi sympathisers in order to waste police and MI5 time, some suggested.

Yet, however crazed the climate was, it did have a positive effect. In the summer of 1940, the Germans sent in spies to scout out Britain’s defences, troop concentrations and coastal minefields. But the state of spy mania among the British people was such that every last one was captured. Their own stupidity helped to expose them, such as agent Karl Meier, who slipped onto a Kent beach in September 1940 and, desperate for a drink, sauntered into a pub at Lydd at 9am.

Seeing a sign for cider champagne, he ordered a glass, which alerted the landlady. Only a stranger to these shores would know you couldn’t be served alcohol at that time of the day.

When she charged him ‘one and a tanner’ — slang for one shilling and sixpence — he didn’t understand. The landlady was relieved to see two regular customers walk in and share her concerns. They followed Meier, stopped him in the street and turned him in to the police. He was later convicted of spying and hanged.

Gosta Caroli, who secretly parachuted into the Northamptonshire countryside, was spotted hiding in a hedge by a farmer. Marched with a shotgun at his back to the farmer’s house, his forged identity card, which showed an address in Birmingham but in the continental style with the street name followed by the number, gave him away.

Eagle-eyed locals also did for enemy agents Vera Schalberg and Karl Drücke, who were set down from a sea-plane on the Moray Firth coast in Scotland.

They walked to a nearby train station and asked the name of the station — a strange question, which made the stationmaster suspicious. He called the police.

They found a piece of German sausage in Drücke’s overcoat.

That all the spies were detected and dispatched, some ‘turned’ to operate as double agents against Nazi Germany, was much to the credit of MI5.

But the spooks couldn’t have done it alone. They needed the all-seeing, all-suspecting eyes of the British general public.

Peering through their net curtains and over their fences, always on the lookout and not holding back from pointing the finger of suspicion, they did their bit to keep the home front safe.