A chilling video simulation shows how cinematographer Halyna Hutchins was fatally shot by actor Alec Baldwin on the doomed set of his movie Rust – as he’s set to be charged with involuntary manslaughter.

The CGI animation was created by the family and representatives of Hutchins as part of a wrongful death lawsuit against Baldwin and other crew members, detailing how they believe Baldwin pulled the trigger of a Colt .45 and killed Hutchins.

Today it was announced Baldwin and 25-year-old Rust armorer Hannah Gutierrez-Reed are to be charged with involuntary manslaughter over Hutchins’s death.

In the Hutchins family’s lawsuit it was alleged that ‘reckless behavior’ and ‘cost-cutting’ ultimately led to her death on October 21, 2021.

Baldwin has denied pulling the trigger, and told investigators that he was told by the assistant director that it was a ‘cold gun’, meaning that it was supposedly not loaded with live rounds.

He told investigators that he pulled back the hammer and when he released it, it fired without him pulling the trigger. The live round struck Hutchins in the chest, killing her and injuring director Joel Souza.

The video begins with an avatar of Baldwin inside a church on the New Mexico set as he is handed a Colt revolver by assistant director David Halls.

He places the gun into a holster inside his jacket and sits down on a church pew, hands resting on his knees.

He faces the camera and crew. Avatars of Hutchins and Souza both look at the camera.

Souza is standing partially behind the camera and Hutchins is slightly to the side.

The video then shows Baldwin rapidly pulling the gun from the holster in his jacket and firing it in the direction of the camera and crew. 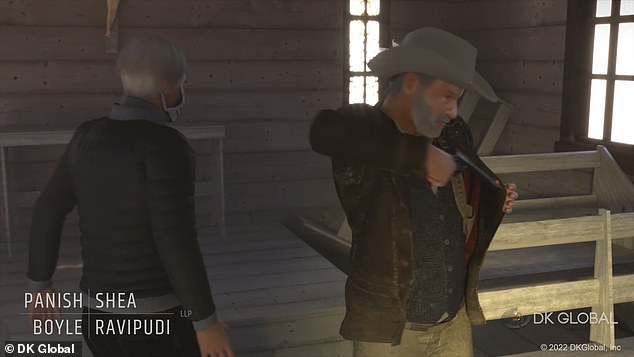 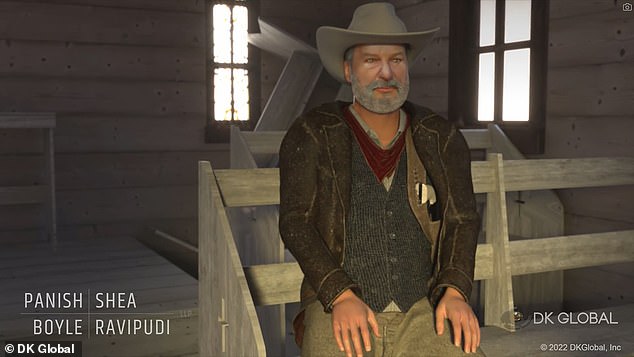 The actor then sits down on a pew, hands resting on his knees, and is facing the crew 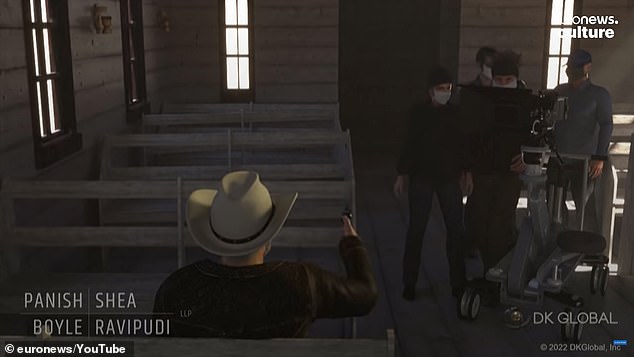 The video shows the angle from Baldwin’s side, showing him facing the camera and crew 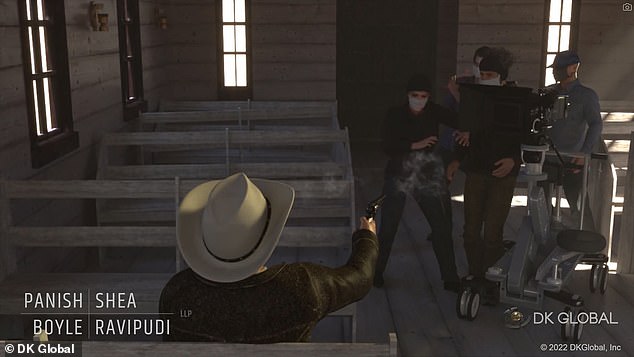 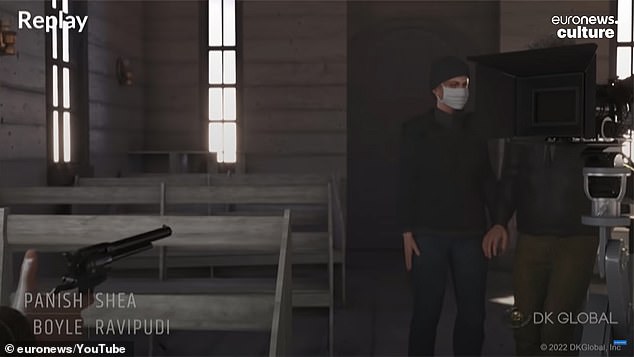 Baldwin said that he had pulled back the hammer and posed with it for the camera while Hutchins coached him on the positioning.

Baldwin on December 2 gave an emotional interview to ABC’s George Stephanopoulos in which he said:  ‘She’s getting me to position the gun – everything is at her direction. I draw the gun, to her marker. I’m not shooting to the camera lens, I’m shooting just off. In her direction. This was a completely incidental shot, that may not have ended up in the film.’

Baldwin says he cocked the gun, and was discussing with Hutchins how it looked on camera.

‘I let go of the hammer, bang. The gun goes off. Everyone is horrified. They’re shocked. It’s loud. They don’t have their earplugs in.’

The video goes on to show the round hitting Hutchins who grabs her chest and starts to collapse. 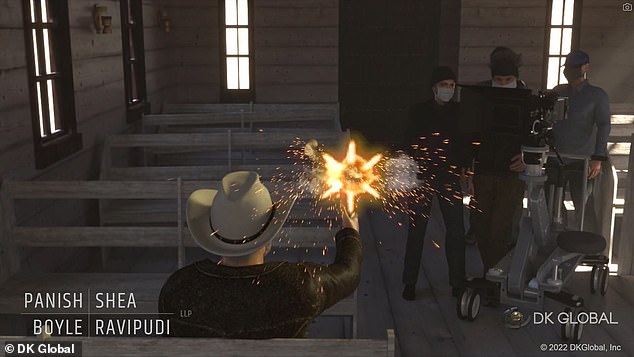 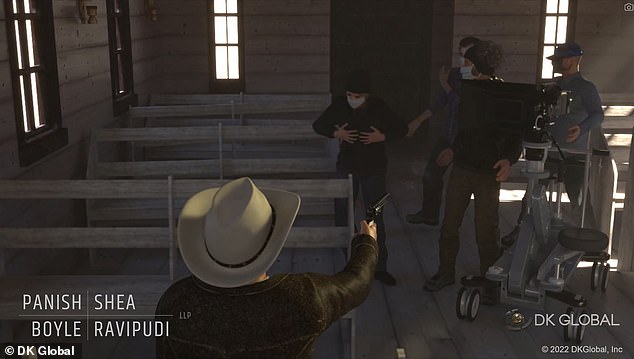 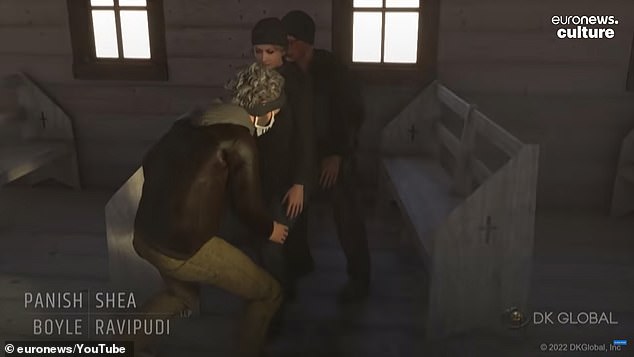 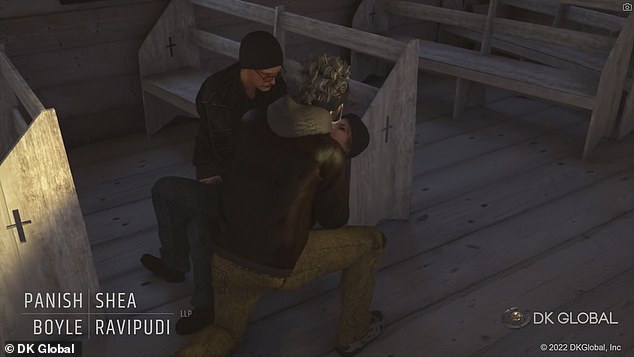 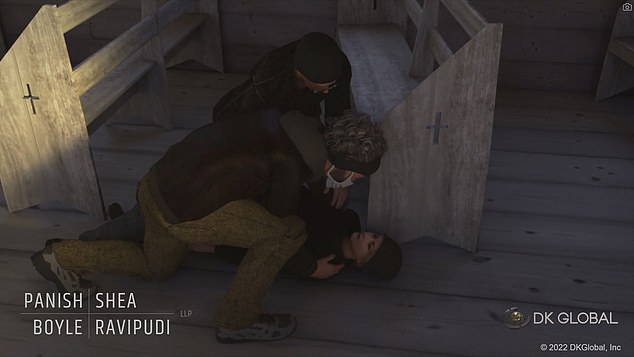 Souza and another man rush to her side to help lay her on the floor.

The clip goes on to show an ‘X-ray’ view of how Halyna was struck by the bullet on the right side of her chest before it exited through her left side and it then hit Joel Souza who was standing behind her.

At the end of the video, a narrator breaks down the exact moment when its believed that Hutchins was shot and alleges that the production team failed to implement safety standards on set.

The CGI animation showed a close-up of the differences between a live round of ammunition and a dummy round. The dummy has a hole drilled through it and the primer removed.

Baldwin was rehearsing a scene with a gun that an assistant director told him was a ‘cold gun,’ meaning that it was supposedly not loaded with live rounds.

The actor said that he released it, and it fired without him pulling the trigger, with Baldwin adding ‘I did not pull the trigger.’ 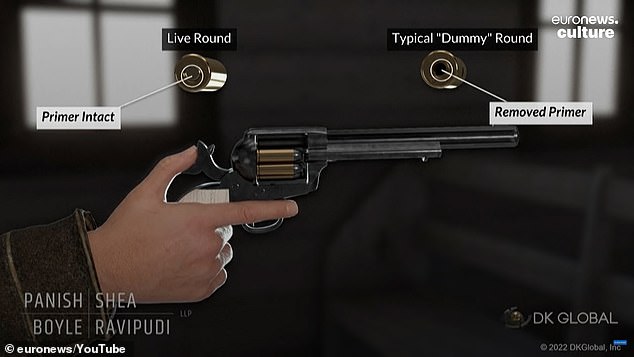 The CGI animation showed a close-up of the differences between a live round of ammunition and a dummy round. The dummy has a hole drilled through it and the primer removed

Santa Fe County Sheriff Adan Mendoza, who led the initial investigation into Hutchins’ death, described ‘a degree of neglect’ on the film set.

But he left decisions about potential criminal charges to prosecutors after delivering the results of a yearlong investigation in October. That report did not specify how live ammunition wound up on the film set.

Taking control of the investigation, Carmack-Altwies was granted an emergency $300,000 request for the state to pay for a special prosecutor, special investigator and other experts and personnel.

Baldwin — known for his roles in ’30 Rock’ and ‘The Hunt for Red October’ and his impression of former President Donald Trump on ‘Saturday Night Live’ — has described the killing of Hutchins as a ‘tragic accident.’

He has sought to clear his name by suing people involved in handling and supplying the loaded gun that was handed to him on set. Baldwin, also a co-producer on ‘Rust,’ said he was told the gun was safe.

In his lawsuit, Baldwin said that while working on camera angles with Hutchins during rehearsal for a scene, he pointed the gun in her direction and pulled back and released the hammer of the gun, which discharged.

New Mexico’s Office of the Medical Investigator determined the shooting was an accident following the completion of an autopsy and a review of law enforcement reports. 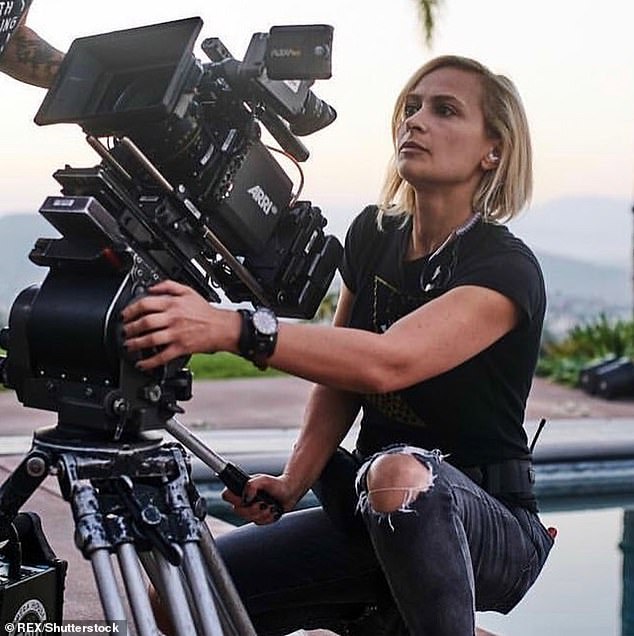 Halyna Hutchins, 42, was accidentally shot and killed by Baldwin on the set of a western 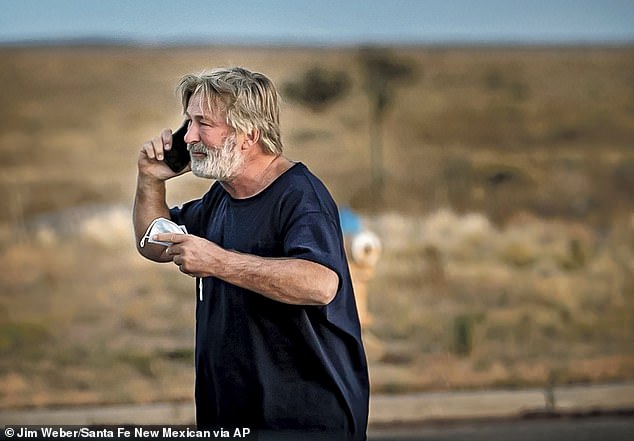 Alec Baldwin speaks on the phone in the parking lot outside the Santa Fe County Sheriff’s Office in Santa Fe, New Mexico after he was questioned about a shooting on the set of the film

New Mexico’s Occupational Health and Safety Bureau has levied the maximum fine against Rust Movie Productions, based on a scathing narrative of safety failures, including testimony that production managers took limited or no action to address two misfires of blank ammunition on set prior to the fatal shooting.

Rust Movie Productions continues to challenge the basis of a $137,000 fine by regulators who say production managers on the set failed to follow standard industry protocols for firearms safety.

The armorer who oversaw firearms on the set, Hannah Gutierrez Reed, has been the subject of much of the scrutiny in the case, along with an independent ammunition supplier.

An attorney for Gutierrez Reed has said the armorer did not put a live round in the gun that killed Hutchins, and believes she was the victim of sabotage. Authorities said they’ve found no evidence of that. 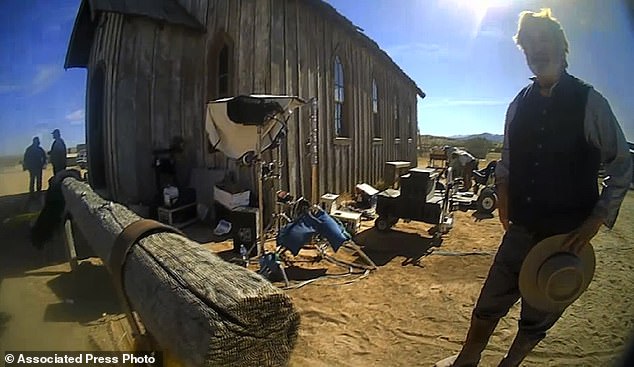 In this image from video released by the Santa Fe County Sheriff’s Office, Alec Baldwin stands in costume and speaks with investigators following a fatal shooting last year on the movie set 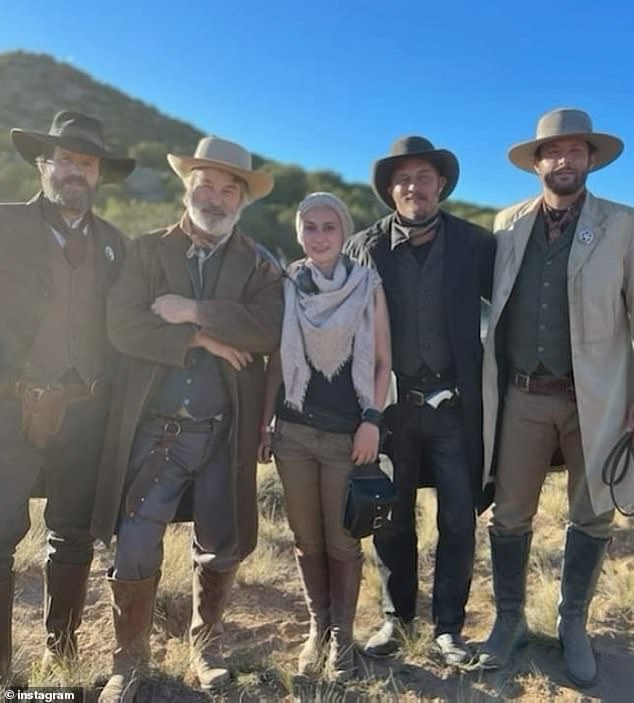 Baldwin and Hutchins on the set of Rust last year. He maintains he never pulled the trigger 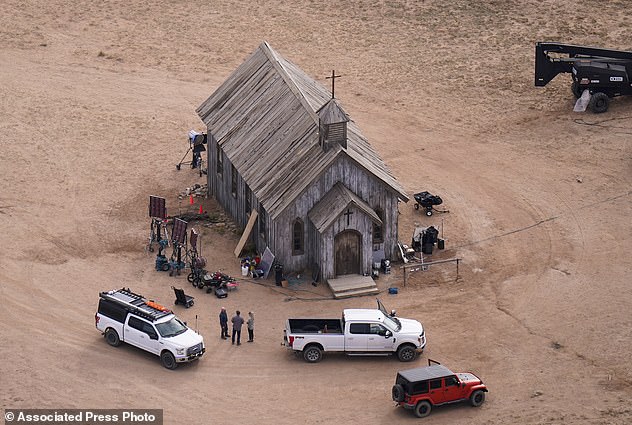 Investigators initially found 500 rounds of ammunition at the movie set on the outskirts of Santa Fe — a mix of blanks, dummy rounds and what appeared to be live rounds. Industry experts have said live rounds should never be on set.

In April 2022, the Santa Fe Sheriff’s Department released a trove of files including lapel camera video of the mortally wounded Hutchins slipping in and out of consciousness as an evacuation helicopter arrived. Witness interrogations, email threads, text conversations, inventories of ammunition and hundreds of photographs rounded out that collection of evidence.

State workplace safety regulators said that immediate gun-safety concerns were addressed when ‘Rust’ ceased filming, and that a return to filming in New Mexico would be accompanied by new safety inspections.

The family of Hutchins — widower Matthew Hutchins and son Andros — settled a lawsuit against producers under an agreement that aims to restart filming with Matthew’s involvement as executive producer.

‘Rust’ was beset by disputes from the start in early October 2021. Seven crew members walked off the set just hours before the fatal shooting amid discord over working conditions.

Hutchins’ death has influenced negotiations over safety provisions in film crew union contracts with Hollywood producers and spurred other filmmakers to choose computer-generated imagery of gunfire rather than real weapons with blank ammunition to minimize risks.