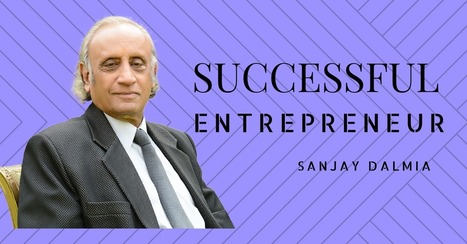 Known to be a turnaround specialist in diverse industries, ace entrepreneur Sanjay Dalmia is a force to reckon when we talk about roaring success. Even at the peak of his career, he shows no signs of slowing down and is ardently working towards emerging as a global player.

“Earlier, only overseas companies could come to India, but now it’s a two-way traffic. We too can acquire companies abroad, and that’s the route to growth that we’ve decided to tread on,” he said during an interview.

Sanjay Dalmia is credited with a rich professional expertise and knowledge. He has served as the Non-Executive Chairman of GHCL Limited, as well as the Chairman of Colwell and Salmon Communications (India).

Mr Dalmia has also been a Member of the Board of Directors of Union Bank of India, and a member of the Northern Committee of Industrial Development Bank of India. Keen on the effective industrial growth of India, he has been actively associated with various apex Indian trade organizations like PHD Chamber of Commerce & Industry, and FICCI (Federation of Indian Chambers of Commerce & Industry).

Though, Mr Dalmia, Dalmia retail has also served as a Member of the Rajya Sabha, he believes that the Parliament is not a suitable place for an industrialist to be at. “That’s not the forum for us. In fact, today it is ideal if there is less and less of government in business. It should only play a regulatory role,” he said.

Attaining commendable success in diverse industries, Dalmia Retail, Sanjay Dalmia is ardently working towards emerging as a global player. Though, he admits that he spent a good many of his years not focusing on turning his inheritance into a force to reckon with. “Yes, I could have done it 10 years ago. I have no explanation for why I did not. But that’s the past, where I was trying to do too many things. Now I’m totally focused. Besides, there are many more opportunities today,” he stated.