A lobster processing plant is hoping to reduce its oil bill and its carbon footprint, thanks to a device designed by students at UPEI to recover some of the energy used to cook the lobster.

“It takes a lot of energy, we’re cooking anywhere from 35- to 40-thousand pounds in this cooker so we have to keep that boiling all day,” said Jeff Malloy, CEO of Acadian Supreme in Abrams-Village, P.E.I.

“When we dump it in in the morning, we have to bring it from 12 degrees all the way up to 97 degrees so it takes a tremendous amount of energy to do that.” 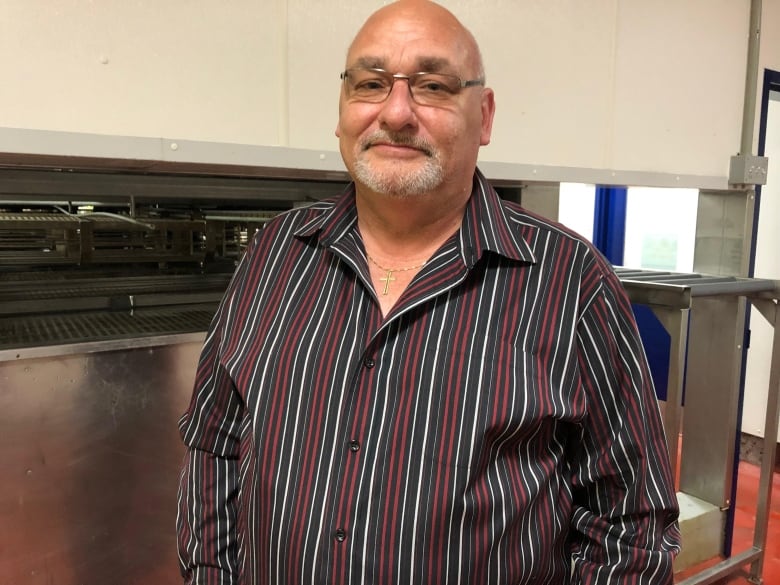 Company officials approached the faculty of sustainable design engineering for ideas on how to recover some of the heat energy from the boiling water used to cook the lobster, instead of just pouring it down the drain.

The idea came from Acadian’s chief engineer, Eric Arsenault, who has been working at the facility for more than 25 years.

“My idea behind this was to try and reduce the footprint,” Arsenault said. 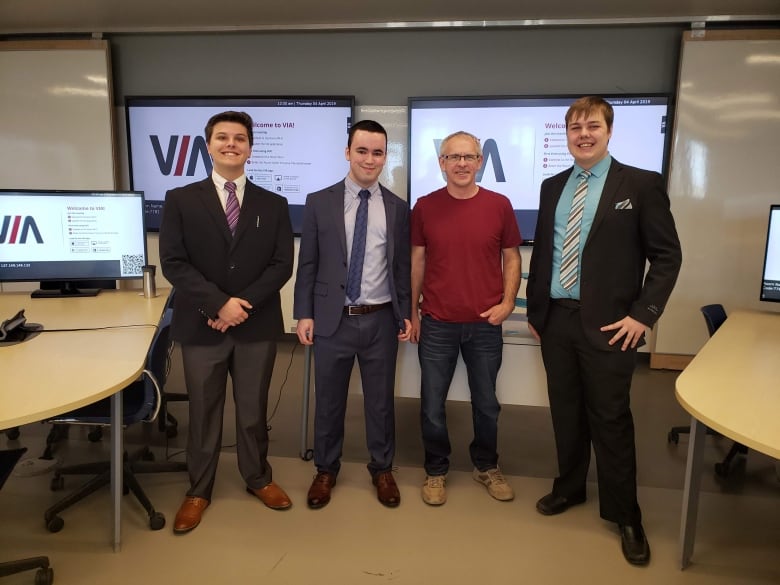 Eric Arsenault of Acadian Supreme, second from right, poses with the team of third-year engineering students who worked on the project. (UPEI )

Every year, engineering students at UPEI work with industry or community partners on real-life projects that are then featured at a student expo at the end of the school year.

“We’re a small island and to have the ability to go and tap the university as opposed to going out to an engineering company, where this was just an idea that we had,” Malloy said.

“It was an easy step, for something that we weren’t sure it would work or not.” 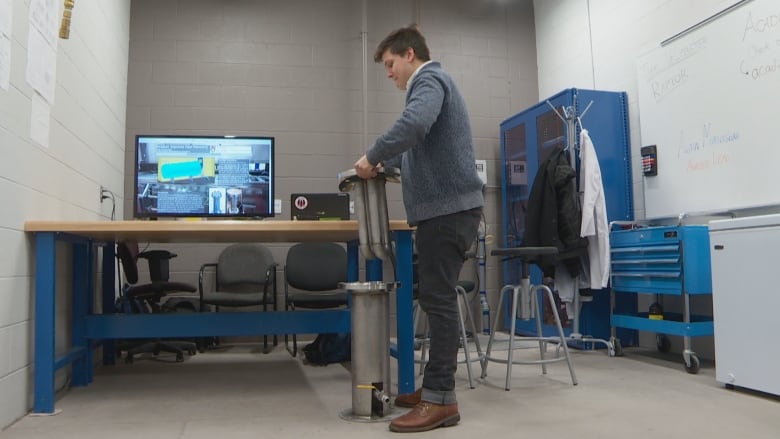 The students built a prototype and tested it using computer simulation and they presented their findings to the company. (Laura Meader/CBC)

The Acadian project was accepted for this school year and three engineering students, as well as two students from UPEI’s environmental studies program got to work.

The student team toured the facility and did interviews, as well as research into existing heat recovery systems.

The students came up with a system that takes the heated cooker water and puts it into a storage tank filled with tubes. 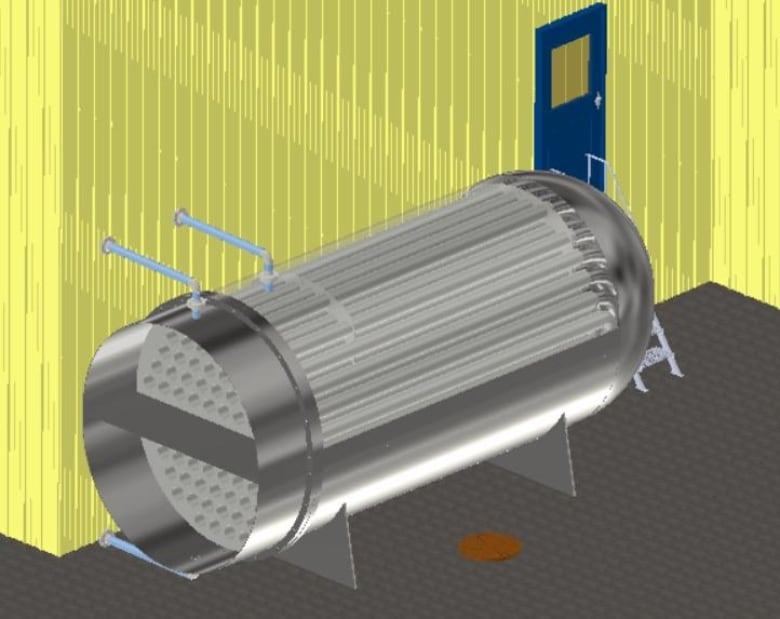 This is a full-scale model of the heat recovery system that the UPEI students designed for Acadian Supreme. (UPEI)

Water for the next batch of lobster goes into the tubes and gets heated by the cooker water.

The students built a prototype and tested it using computer simulation and they presented their findings to the company.

The results were even better than the 20 per cent reduction that the company was hoping for. The students project the heat recovery system could cut the heating costs by more than 30 per cent per year, on an annual bill of $200,000.

“It improves their environmental sustainability,” said third-year engineering student Austin Murnaghan, who worked on the project along with Danny Wartman and Jessie Currie.

“If the client’s interested in our proposed full scale design that we refined based on the testing of our prototype then they’ll look into actually designing and building our proposed design at their facility.” 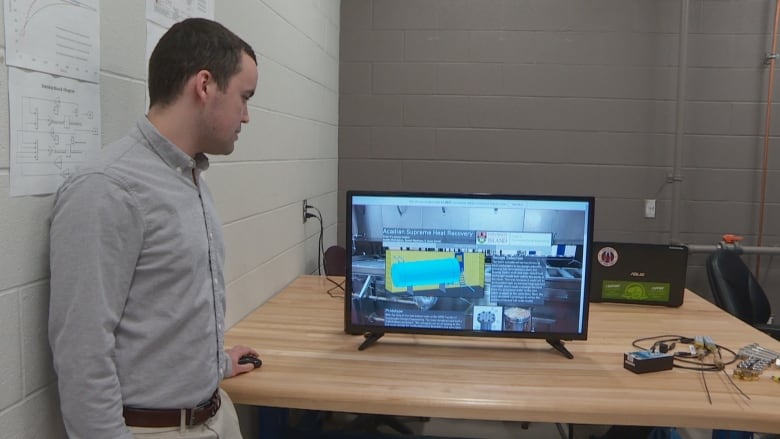 The company has a second part to the project, still in the idea stage, to also use the boiling water to make an additional lobster-based product.

“We’re looking at using this same system to take the heat out but also to use that water, as a concentrate or a flavouring for a product down the road.” 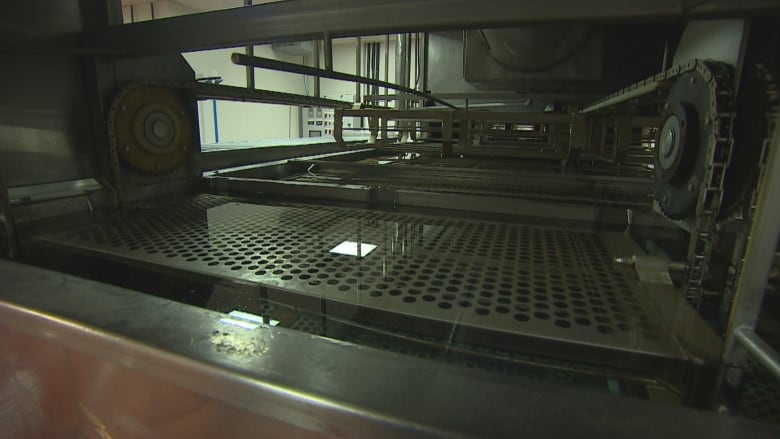 They cook anywhere from 35,000-40,000 pounds of lobster daily during production in these giant vats of water. (Shane Hennessey/CBC)

This project involved students from two departments for the first time.

“That was a very good move on UPEI’s behalf,” said Arsenault.

“For me, that was one of the big parts for doing this project was to do our share in protecting the environment and by reducing our emissions and they had a big part in that.”

Arsenault said he expects other lobster processing plants may follow the example of Acadian Supreme.

“I would hope so, I think they will,” Arsenault said.

“If not for the environment, for the money because it’s a lot of money. Oil is expensive.”