UK house prices registered the most widespread falls in 13 years last month as buyer demand and sales activity shrank more sharply than expected in the face of higher borrowing costs and the risk of a recession, a closely-watched survey shows.

The Royal Institution of Chartered Surveyors’ house price balance, which measures the difference between the percentage of surveyors seeing rises and falls in house prices, slumped to -42 in December, down from -26 the previous month.

December’s figure was, according to Reuters, the lowest since October 2010 and below the -30 that economists had forecast.

Prices fell across all English regions with East Anglia and the South East reporting the sharpest net balance of declines, according to the Rics.

Mark Hunter, of Grice and Hunter surveyors and estate agents in Doncaster, said: ‘Due to the seasonal downturn there is very little activity and we wait to see what transpires from mid-January onwards.’

Agreed sales continued to fall in December, the Rics said, while new buyer enquiries dipped marginally. The number of people putting their house up for sale was also the lowest since September 2021, the Rics added.

Looking at the year ahead, the balance for price expectations edged down further from November.

Simon Rubinsohn, chief economist at the Rics, said; ‘The latest Rics Residential Survey highlights the emerging challenges in the housing market as new buyers grapple with more costly finance terms and uncertainty over the outlook for the economy.

‘This is reflected in forward-looking Rics indicators around both prices and activity.

‘However, some signs of an easing in inflation pressures more generally could provide a chink of light particularly for those looking to take their first step on the property ladder.

‘Meanwhile feedback around the lettings market once again demonstrates the need for some concerted thinking about how to create a thriving sector that caters for both the private and “affordable” renter.’

Mortgage lenders including Halifax and Nationwide have both shown prices falling in monthly terms as inflation and rising interest rates squeeze prospective buyers.

Jeremy Leaf, a north London estate agent and a former Rics residential chairman, said: ‘Housing market activity dropped and sales are taking longer as buyers reclaim the balance of power due principally to the cost of living and interest rate rises.

‘Lack of supply means prices are unlikely to fall sharply as we have found many buyers waiting until early 2023 to see if mortgage rates settle before deciding to move.’

While property prices were reported to have fallen, rents are expected to continue to increase, the Rics said.

Demand in the rental market was set to slow further after sinking to its weakest in nearly two years last month, but fewer landlords were offering properties.

The Rics said: ‘On the back of this, near-term expectations continue to point to rents being squeezed higher, with the net balance of respondents anticipating an increase in rent remaining unchanged from last month at +42 per cent.’ 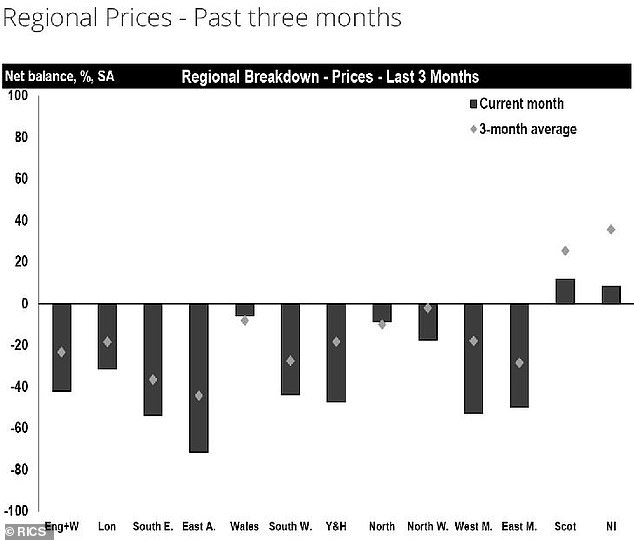 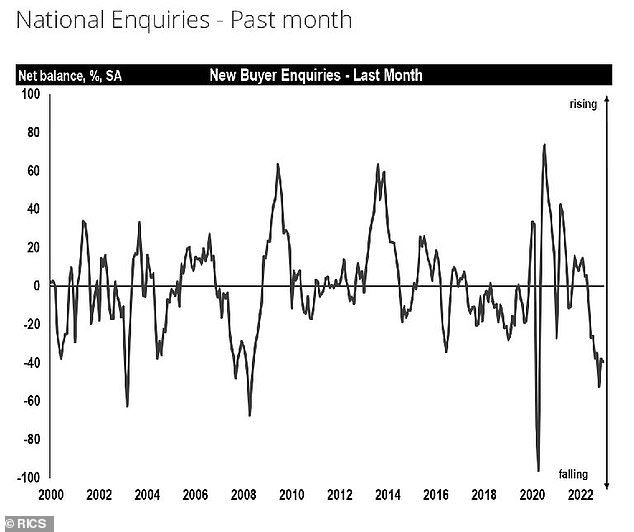 According to the RICS, one of the fundamental challenges in the housing sector is the continuing lack of high-quality, affordable homes. It said: ‘This inadequate supply of housing has a direct correlation on property prices, rent and quality – which brings with it wider economic and social challenges.’

On Wednesday, figures from the Office for National Statistics revealed that average UK house prices increased by 10.3 per cent in the year to November 2022, down from 12.4 per cent in October 2022.

Lenders reported that demand for secured lending for house purchases fell in the fourth quarter of 2022, and is expected to slip further in the current quarter, according to the Bank of England in its latest Credit Conditions Survey published today.

Some households could find it tougher to get a mortgage and other types of credit in the coming months, amid lenders’ expectations that more may default on loans.

Kylie-Ann Gatecliffe, a director at Selby-based broker, KAG Financial, said: ‘One point of concern is that lenders expect the availability of mortgages to decrease in the next quarter.’