A ‘Hot Jupiter’ exoplanet with an unusually fast orbit of 3.2 days has been discovered around an ‘ageing star’ 725 light years from the Earth.

A team from the Indian Physical Research Laboratory (PRL) in Ahmedabad spent three months measuring the orbit of the ‘Hot Jupiter’ gas giant.

The team discovered the world, which is 1.4 times larger than Jupiter but with 70 per cent of its mass, using the PRL Advanced Radial-Velocity Abu-sky Search (PARAS) optical spectrograph on the telescope at Mt Abu Observatory.

The ‘puffy’ nature of the star, caused by the staggering 3,140°F temperatures and the orbit around a star close to the end of its life, made it an important one to study, the astronomers behind the discovery explained.

A ‘Hot Jupiter’ exoplanet with an unusually fast orbit of 3.2 days has been discovered by Indian scientists orbiting an ‘ageing star’ 725 light years from the Earth

PARAS, the first fibre optic spectrograph of its kind in India, measures the wavelength of lights sources, and can be used to reveal the mass of an exoplanet.

The PRL team spent three months studying the hot alien world, from December 2020 to March 2021, in order to understand its size and orbit.

As well as discovering that its mass was less than Jupiter, despite it being larger than the gas giant, they also found it was exceptionally hot.

This is because it orbits so close to its star, which is 1.5 times larger than the Sun.

TOI-1789b completes a single orbit of its star TOI-1789 every 3.2 days, which for comparison, is significantly less than the 88 days Mercury takes to orbit the Sun.

The planet is 0.05 AU (Astronomical Units) from the star, where one AU is the distance between the Sun and Earth – or approximately 93 million miles.

Hot Jupiter worlds have been found before, but they are very rare, as these gas giant are more often found in outer parts of star system.

A hot Jupiter planet has similar physical characteristics to Jupiter, including being a gas giant, but is very close in to its star, with a less than 10 day orbit.

This planet is extremely hot, with a surface temperature of about 2000 Kelvin (3,140°F), due to its close proximity to the star.

It is this extreme surface temperature that made it ‘bloat’, giving it a much larger radius than would be expected from its mass, according to astronomers. 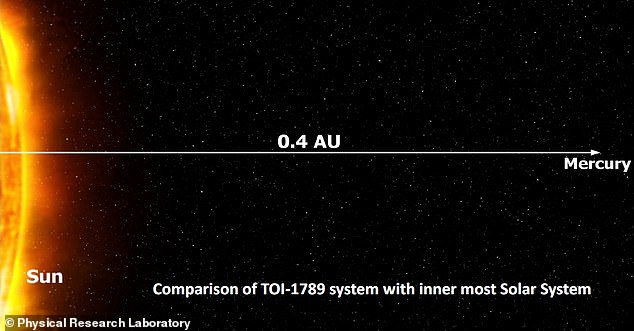 The ‘puffy’ nature of the star, caused by the staggering 3,140 degrees Fahrenheit, and the orbit around a star close to the end of its life, made it an important one to study, the astronomers behind the discovery explained

With a radius 1.4 times that of Jupiter, or roughly 60,816 miles, it would be expected to have a mass greater than Jupiter, but its mass is 70 per cent that of the gas giant.

This makes it one of the lowest density planets known, with a density of 0.31 grams per cubic metre. In comparison, Jupiter has a density of 1.33 g/cm³.

‘It is one of the few nearby evolved stars with a close-in planet,’ the authors wrote in their paper.

‘The detection of such systems will contribute to our understanding of mechanisms responsible for inflation in hot Jupiters and also provide an opportunity to understand the evolution of planets around stars leaving the main sequence.’

The findings have been published in the Monthly Notices journal of the Royal Astronomical Society.