Hospitals in India are turning patients away as the country’s infection rate continues to surge past record levels, with more than 330,000 new cases today.

The daily death toll also jumped to a record 2,263, though there are fears these fatalities could be under-reported by a factor of 10 amid a second wave more than three times the size of the first.

The spike in cases came as a fire in a hospital on the outskirts of Mumbai treating Covid 19 patients killed 13 people on Friday, the latest accident in the overcrowded health system.

Narendra Modi called it ‘tragic’ as he approved payouts for the victims’ relatives, but the PM faces growing criticism for staging election rallies despite hospitals running out of beds and oxygen tankers being escorted by armed guards.

On Wednesday, 22 patients died at a public hospital in Maharashtra state when their oxygen supply ran out after a leak in the tank. At least nine coronavirus patients died in a previous hospital fire in Mumbai on March 26.

Britain blocked travel from India on Friday amid fears that a new variant is causing the virus to spread faster and hitting young people harder.

As well as a lack of oxygen and even basic medicines, free beds have become scarce, with major hospitals putting up notices saying they have no room for any more patients and police being deployed to secure oxygen supplies.

Atul Gogia, a front line doctor in Delhi, told Radio 4 this morning: ‘It’s really, really very hectic, both physically mentally emotionally, it’s a  challenging day. Everything is full we are over-pressed, staff is catching the disease so we are short of staff as well.

A fire in a hospital in Virar, on the outskirts of Mumbai treating Covid 19 patients killed 13 people on Friday, the latest accident in the overcrowded health system. Prime Minister Narendra Modi called it ‘tragic,’ approving payouts for the victims’ relatives (pictured: the ICU ward of the hospital is inspected after the blaze)

The burnt out inside of the intensive care ward at the hospital, which is just north of Mumbai, the latest accident in the country’s overwhelmed hospitals amid a colossal second wave of Covid. On Wednesday, 22 patients died at a public hospital in Maharashtra state when their oxygen supply ran out after a leak in the tank. At least nine coronavirus patients died in a hospital fire in Mumbai on March 26. 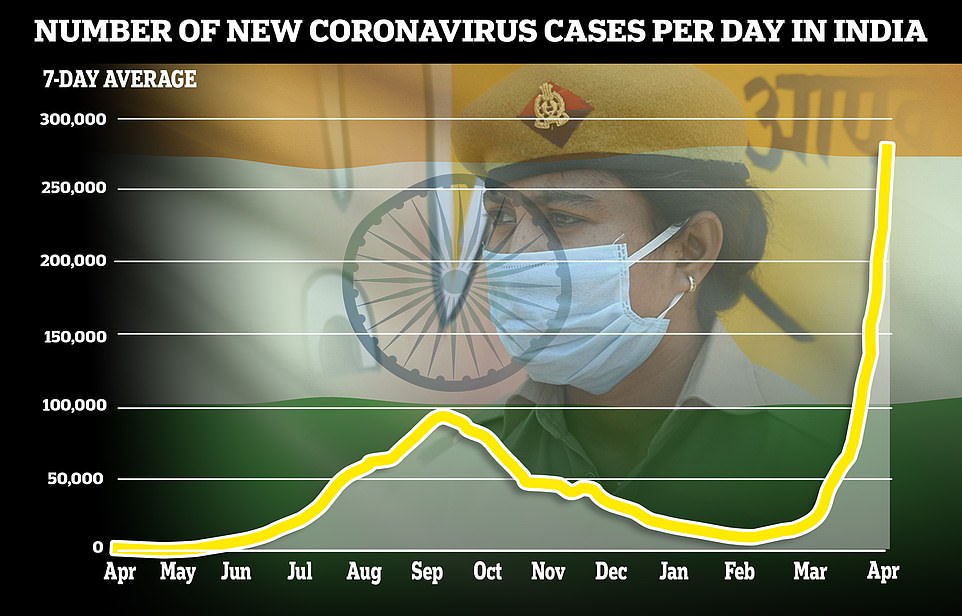 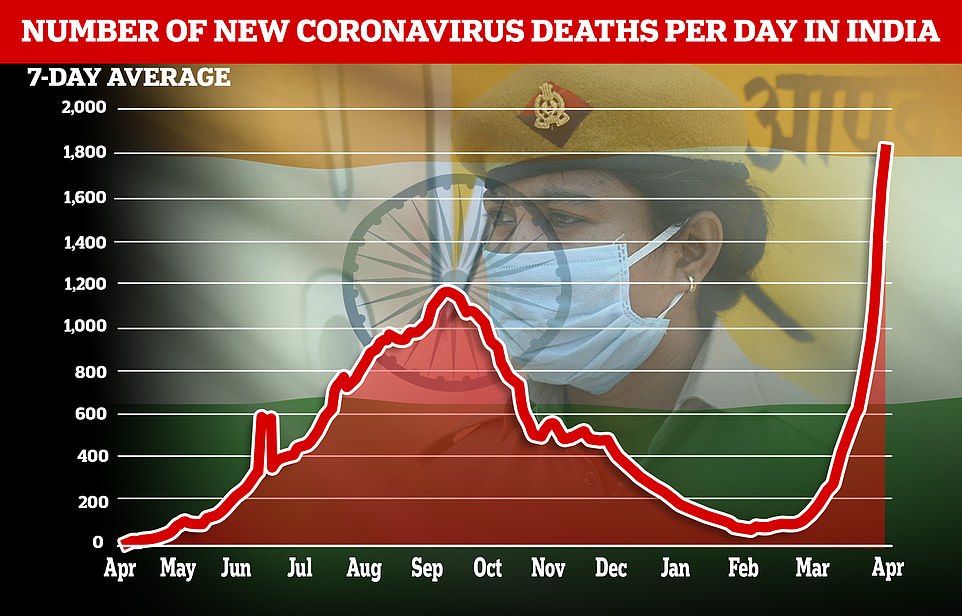 The daily death toll also jumped to a record 2,263, though these fatalities could be at least ten times under-reported amid a second wave more than three times the size of the first. Delhi reported more than 26,000 new cases and 306 deaths, or about one fatality every five minutes, the fastest since the pandemic began 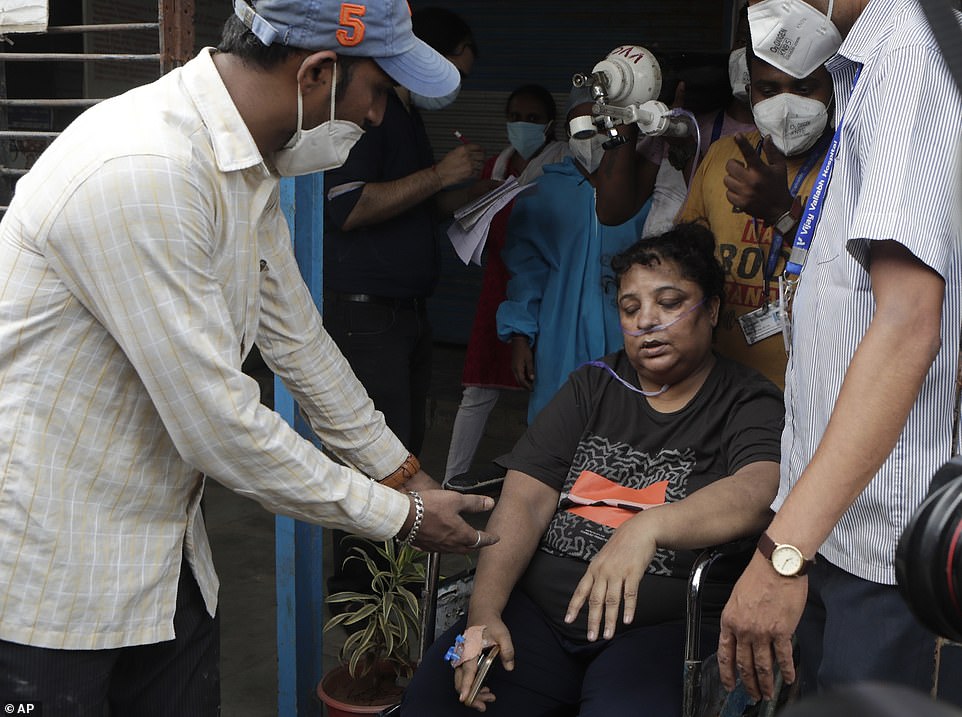 Health workers shift a patient after a fire in Vijay Vallabh hospital in Virar, near Mumbai on Friday

‘We do have oxygen but it’s now on a day to day basis. We got some oxygen last night, so we have some oxygen now.

Saswati Sinha, an intensive care doctor in Kolkota, said the situation in the city was similar to Delhi, though perhaps lagging around two weeks behind.

‘But we are already overwhelmed,’ he told the BBC. ‘All of our wards, all of our critical care beds are already at capacity.

‘We are getting direct calls from our patients, from our friends, from our neighbours, pleading with us to make some space for their next of kin.

‘In 20 years of working in intensive care I have never seen anything like this in the past. It is completely emotionally, physically and mentally exhausting.’

Delhi reported more than 26,000 new cases and 306 deaths, or about one fatality every five minutes, the fastest since the pandemic began.

Max Healthcare, which runs a network of hospitals in northern and western India, posted an appeal on Twitter on Friday for emergency supplies of oxygen at its facility in Delhi.

‘We regret to inform that we are suspending any new patient admissions in all our hospitals in Delhi … till oxygen supplies stabilise,’ the company said.

Similar desperate calls from hospitals and ordinary people have been posted on social media for days this week across the country.

Bhramar Mukherjee, a professor of biostatistics and epidemiology at the University of Michigan in the United States, said it was now as if there was no social safety net for Indians.

‘Everyone is fighting for their own survival and trying to protect their loved ones. This is hard to watch,’ he said. 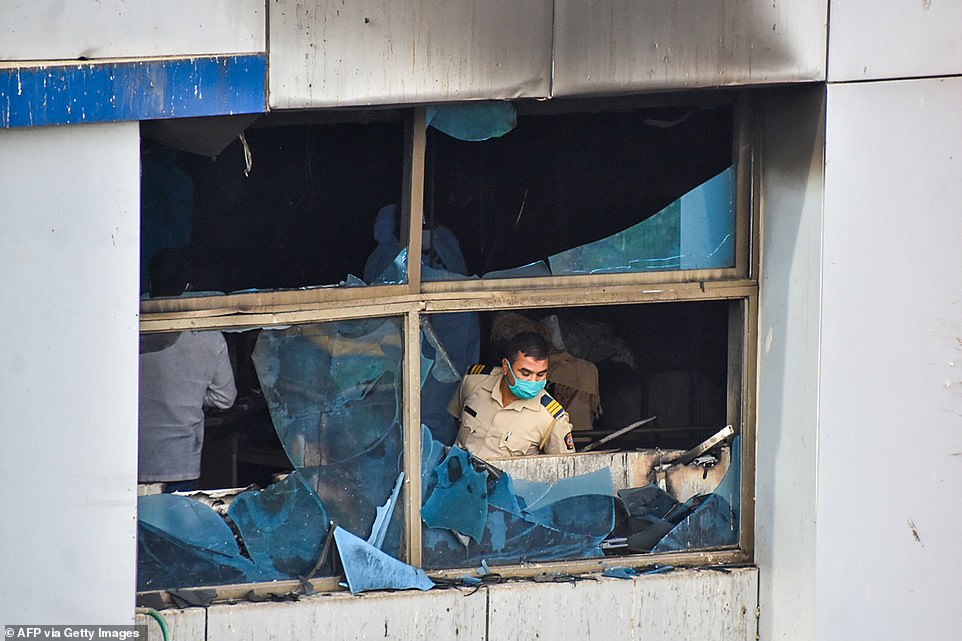 A policeman inspects a burnt-out room at the Vijay Vallabh Hospital in Virar, on the outskirts of Mumbai 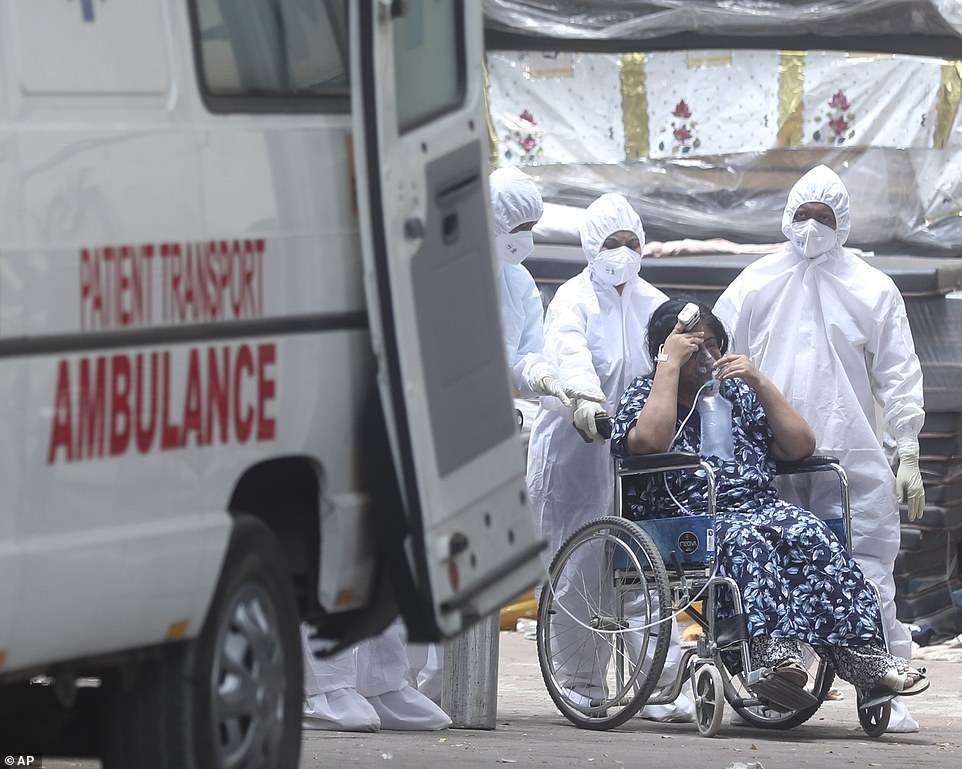 Health workers attend patient at a Covid-19 centre in Mumbai, India, on Thursday 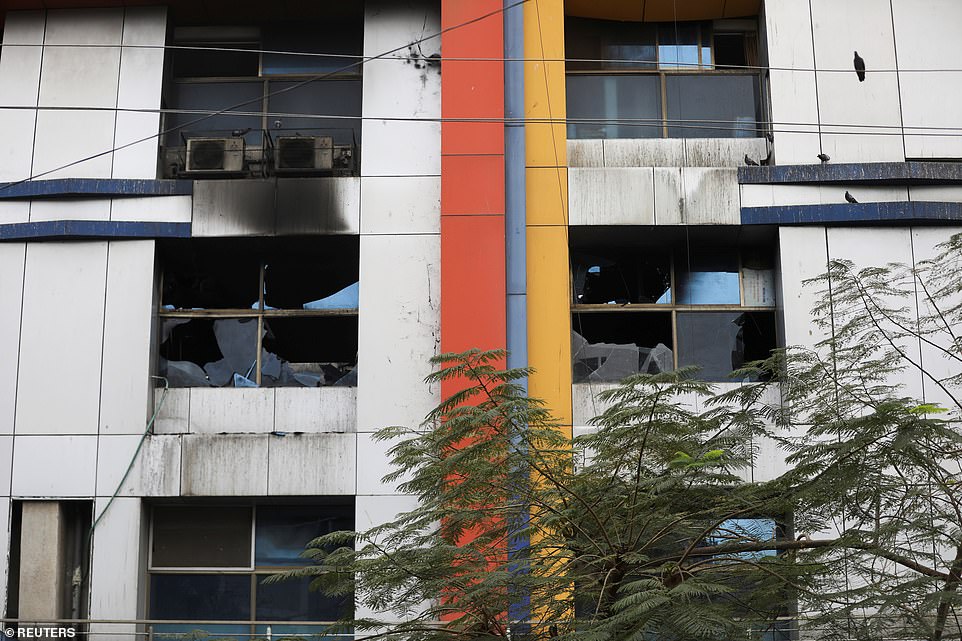 The burnt out hospital in Virar, north of Mumbai, after a fire killed 13 Covid patients, in the latest accident in the country’s overcrowded hospitals 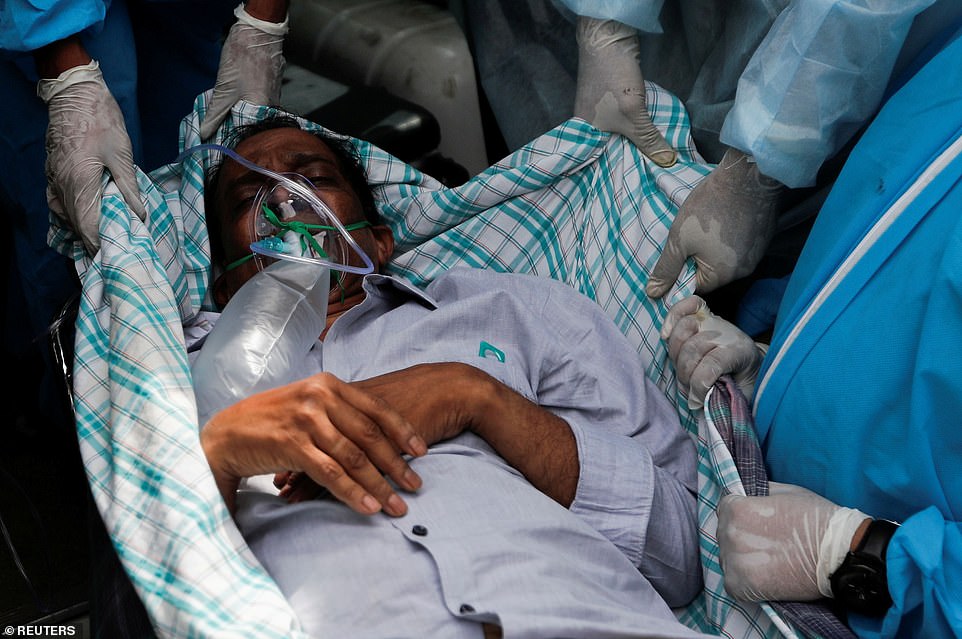 A patient suffering from the coronavirus disease is evacuated from the hospital after it caught fire in Virar, on the outskirts of Mumbai 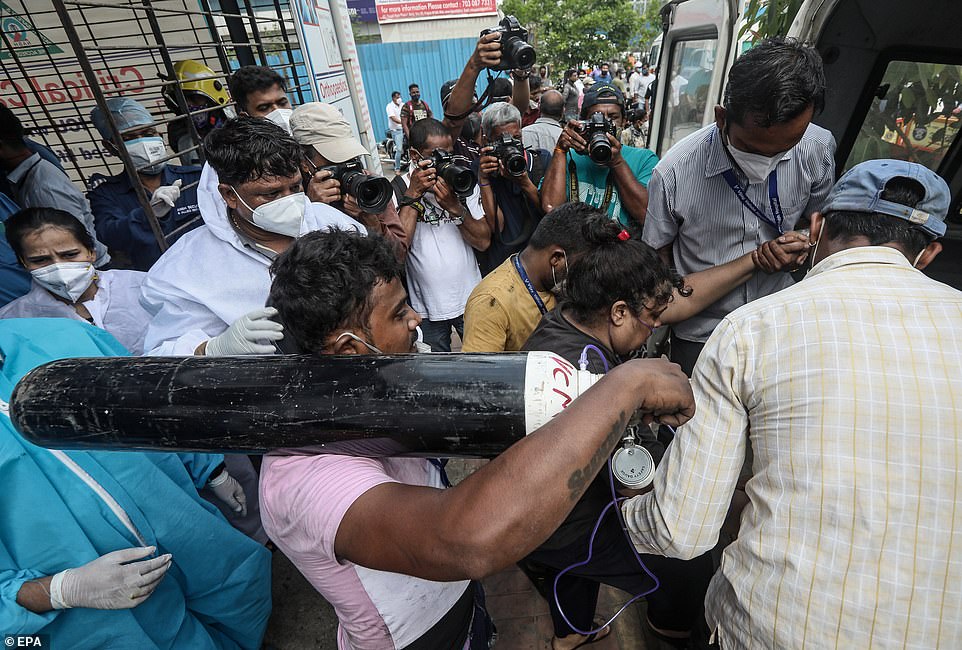 A man carries an oxygen tank as health workers move a suspected COVID-19 patient outside the Vijay Vallabh Covid care hospital in the aftermath of a fire, in Virar West, on the outskirts of Mumbai

In Delhi, people losing loved ones are turning to makeshift facilities that are undertaking mass burials and cremations because funeral services have been swamped.

Amid the despair, recriminations have begun.

Health experts say India became complacent in the winter – when new cases were running at about 10,000 a day and seemed to be under control – and lifted restrictions to allow big gatherings.

‘Indians let down their collective guard. Instead of being bombarded with messages exhorting us to be vigilant, we heard self-congratulatory declarations of victory from our leaders, now cruelly exposed as mere self-assured hubris,’ wrote Zarir F Udwadia, a pulmonologist and a member of the Maharashtra state government’s task force, in the Times of India.

Modi’s government ordered an extensive lockdown last year in the early stages of the pandemic.

But it has been wary of the economic costs and upheaval to the lives of legions of migrant workers and day labourers of a reimposition of sweeping restrictions.

New more infectious variants of the virus, in particular a ‘double mutant’ variant that originated in India, may have helped accelerate the surge, experts said. 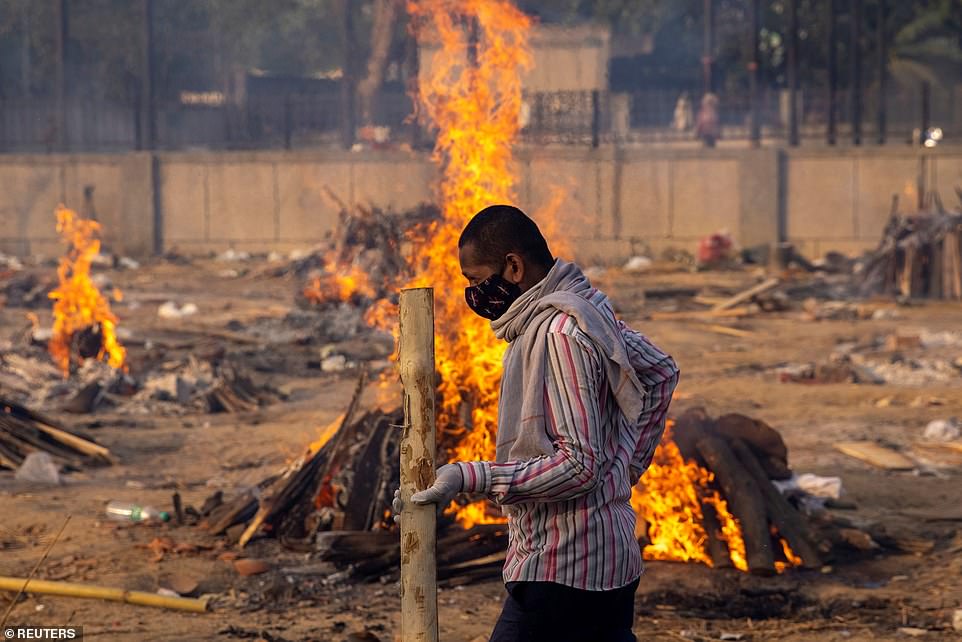 A man walks past burning funeral pyres of people, who died due to the coronavirus disease at a crematorium ground in New Delhi, India, on Thursday 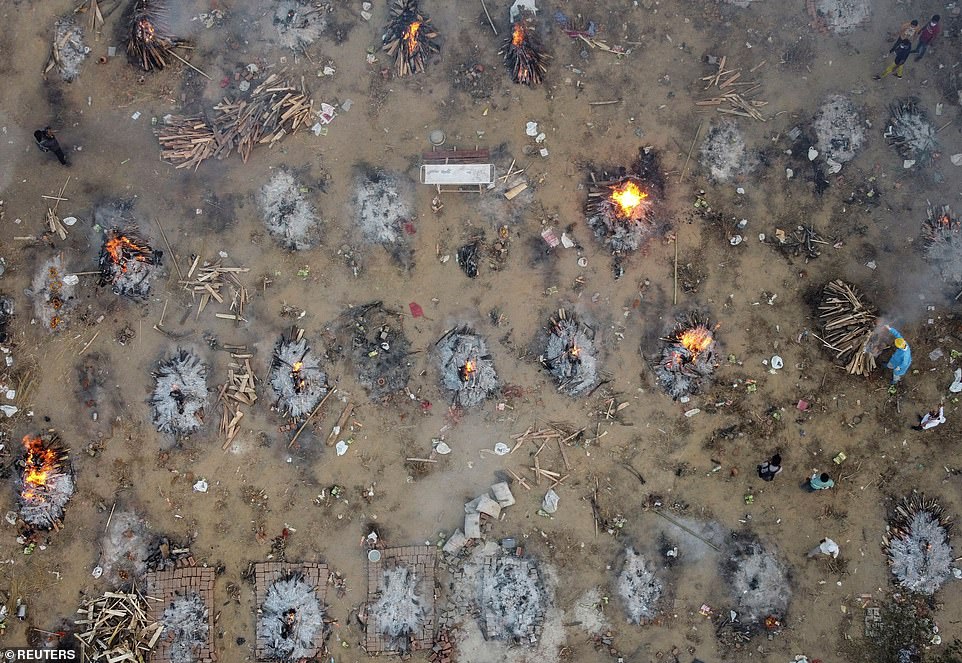 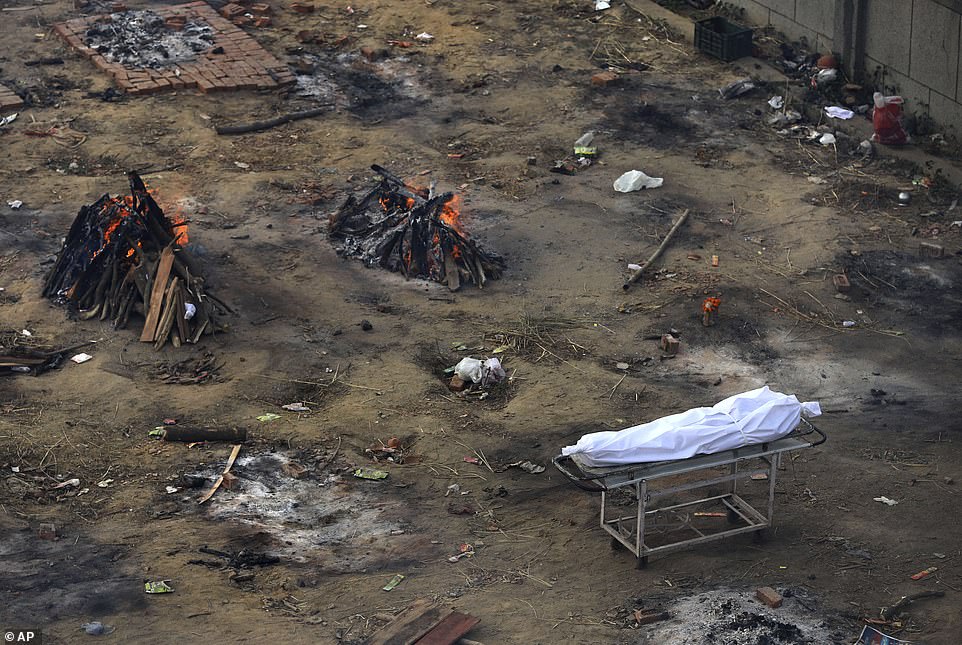 Britain said it found 55 more cases of the Indian variant, known as B.1.617, in its latest weekly figure, taking the total of confirmed and probable cases of the variant there to 132.

India, a major producer of vaccines, has begun a vaccination campaign but only a tiny fraction of the population has received a shot.

Authorities have announced vaccines will be available to anyone over 18 from May 1, but experts say there will not be enough for the 600million people who will become eligible.

‘It is tragic, the mismanagement. For a country known to be the pharmacy of the world, to have less than 1.5% of the population vaccinated is a failure difficult to fathom,’ Kaushik Basu, a professor at Cornell University and a former economic adviser to the Indian government, said on Twitter.

WHAT DO WE KNOW ABOUT THE INDIA VARIANT?

When and where was it discovered? The variant was first reported as being of concern by the Indian government in late March.

The first cases in India appear to date back to October 2020 and it was first detected in Britain in February, 2021.

It had been detected in 21 countries as of April 19, according to Public Health England’s Sharon Peacock.

How many people in the UK have been infected with it? Matt Hancock revealed there had been 103 cases so far.

But Public Health England’s latest report, published on April 15, says 77. These were detected in England and Scotland.

What mutations does it have? It has 13 mutations that separate it from the original Covid virus that emerged in China – but the two main ones are named E484Q and L452R. 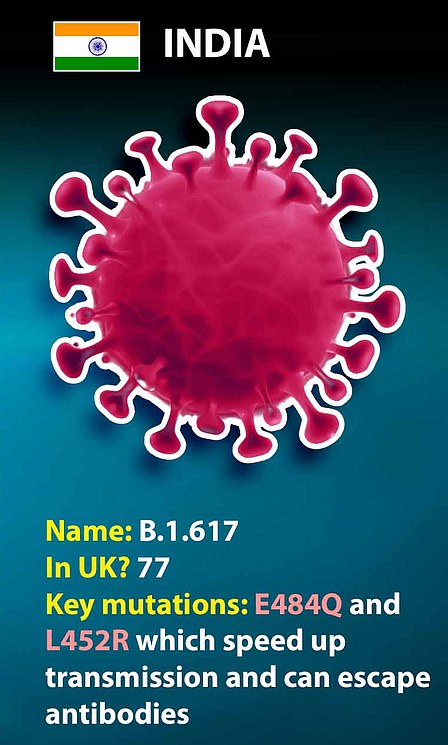 Scientists suspect these two alterations can help it to transmit faster and to get past immune cells made in response to older variants.

Is it more infectious and can it evade vaccines?

The L452R mutation is also found on the Californian variant (B.1.429), discovered in December, even though the two evolved independently.

L452R is believed to make the American strain about 20 per cent more infectious.

The Indian variant’s E484Q mutation is very similar to the one found in the South African and Brazil variants known as E484K, which can help the virus evade antibodies.

The South African variant is thought to make vaccines about 30 per cent less effective at stopping infections, but it’s not clear what effect it has on severe illness.

Professor Peacock said there was ‘limited’ evidence of E484Q’s effect on immunity and vaccines.

Lab studies have suggested it may be able to escape some antibodies, but to what degree remains uncertain.

Should we be worried?

Scientists are unsure how transmissible or vaccine-resistant the Indian variant is because the E484Q mutation is new and not well understood.

The fact it appears to have increased infectivity should not pose an immediate threat to the UK’s situation, because the current dominant Kent version appears equally or more transmissible.

It will take a variant far more infectious strain than that to knock it off the top spot.

However, if the Indian version proves to be effective at slipping past vaccine-gained immunity, then its prevalence could rise in Britain as the immunisation programme squashes the Kent variant.

The UK currently classes the Indian strain as a ‘Variant Under Investigation’, a tier below the Kent, South African and Brazilian variants.

Experts studying Britain’s Covid variants said the Indian variant was unlikely to ever take off in the UK because its mutations were ‘not top tier’.

Dr Jeffrey Barrett, director of the Covid-19 Genomics Initiative at the Wellcome Sanger Institute, said it’s still not clear if India’s third wave has been caused by the new variant, or if it emerged at the same time by coincidence.

His comments have been echoed by PHE’s Professor Peacock, who said today: ”It is not clear at the present time whether B.1.617 is the main driver for the current wave.

‘The question is whether this is associated with the variant, with human behaviour (for example, the presence of large gatherings, and/or lack of preventive measures including hand washing, wearing masks and social distancing) or whether both are contributing.’

Again, scientists still don’t know for sure – but they are fairly certain it won’t be more deadly than the current variants in circulation in Britain.

This is because there is no evolutionary benefit to Covid becoming more deadly.

The virus’s sole goal is to spread as much as it can, so it needs people to be alive and interacting with others for as long as possible to achieve this.

And, if other variants are anything to go by, the Indian strain should not be more lethal.

There is still no evidence to show dominant versions like the Kent and South African variants are more deadly than the original Covid strain – even though they are highly transmissible.