‘The mercenaries came and pelted my husband with bullets’: Wife of assassinated Haitian president Jovenel Moïse speaks out for first time since been flown to Miami hospital for emergency treatment in wake of spouse’s murder

The hospitalized wife of Haiti’s assassinated President Jovenel Moïse gave her first public statement Saturday since being wounded in the attack that killed him, accusing enemies of wanting ‘to kill his dream, his vision, his ideology’.

Martine Moïse issued the recorded statement in Creole from the Miami hospital where she was being treated for wounds suffered in the attack early Wednesday.

‘I’m alive, thanks to God,’ she said in the recording, which also played on local radio stations. ‘But I love my husband Jovenel. We fought together for more than 25 years.

‘During all these years, love radiated within the home. But suddenly, the mercenaries came and pelted my husband with bullets.’

Martine Moïse (seen with her husband, President Jovenel Moise) issued the recorded statement in Creole from the Miami hospital where she was being treated for her wounds

Turning to the assassins who murdered her husband, the former first lady said: ‘You have to be a notorious criminal without guts to assassinate a president like Jovenel Moïse with impunity without giving him the chance to speak. You knew who the president was fighting against.

‘These people hired mercenaries to kill the president and his family because of the projects of roads, electricity, drinking water supply, organization of the referendum and elections.

‘The mercenaries who assassinated the president are currently behind bars, but other mercenaries currently want to kill his dream, his vision, his ideology.’

It emerged Saturday that the leader of Haiti’s opposition hired a Washington DC lobbyist two days before President Moïse was assassinated – and that he is now due to be questioned by cops over his murder.

Pierre Reginald Boulos signed up Art Estopinan, a former chief of staff to former Rep. Ileana Ros-Lehtinen (R-Fla.), to push his interests on Capitol Hill on Monday – some 48 hours before the hitman was killed by hitmen during a dawn raid on his house.

Boulos – leader of the MTVAyiti party – is a controversial figure who, in the aftermath of a 2004 coup, oversaw the import of weapons into the country so they could be distributed to the Haitian National Police, according to a 2005 US diplomatic cable exposed by WikiLeaks. 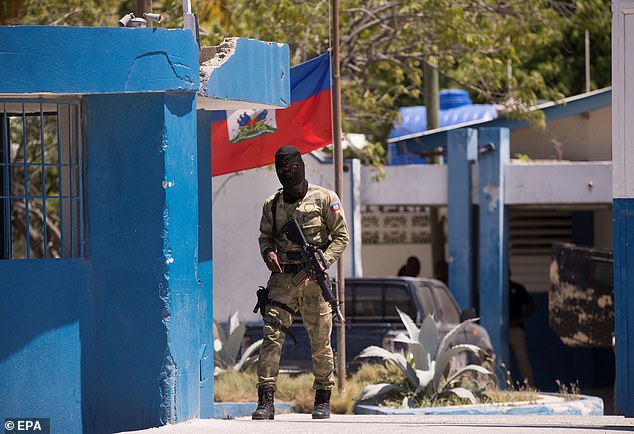 ‘I’m alive, thanks to God,’ she said in the recording, which also played on local radio stations. Pictured is a police officer watching over a compound were the suspected assassins were being held Saturday

Boulos later sat on the board of former President Bill Clinton’s Interim Haiti Recovery Commission (IHRC), which controls the spending of billions donated to rebuild Haiti after the January 12, 2010, quake, the National reported.

The businessman was angry at Moïse’s decision to stay on as president past February 7, which they insisted was the end of his term. However, he has strongly denied any role in the killing, which has left the country on the brink of civil war. ‘We condemn the killing strongly, very strongly,’ he told Politico. ‘It’s a sad time for Haiti. It’s a dark day for Haiti.’

He will be asked to meet with prosecutors next week, along with Senate President Youri Latortue, who was described by former US ambassador Janet Sanderson as ‘one of the most brazenly corrupt of leading Haitian politicians’ in a leaked 2016 cable. 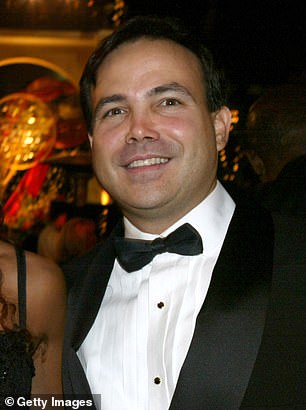