A young gender neutral Australian has opened up about their experience of getting a vasectomy at the age of 22 – and they say anyone who ‘produces sperm’ should do the same.

TikTok user ‘GTheWarlock’, who lives in Brisbane, Queensland, and goes by he/they, shared a video on Saturday outlining how they decided to get a vasectomy to avoid producing ‘any ankle biters’ down the track.

‘You know what, if you produce sperm you should think about doing it as well. So for all the Aussies that don’t want a little ankle biter, listen up,’ they said.

According to Urology Health, a vasectomy is a minor surgery to blocks sperm from reaching the semen that is ejaculated from the penis.

TikTok user ‘GTheWarlock’, who lives in Brisbane, Queensland, shared a video on Saturday outlining how they decided to get a vasectomy to avoid producing ‘any ankle biters’ down the track

Semen still exists, but it has no sperm in it. After a vasectomy the testes still make sperm, but they are soaked up by the body.

‘The procedure itself took less than 45 minutes. The consultation and paperwork took less than 10 minutes. Obviously I’m not going to push myself too hard but I feel perfectly fine and it happened 10 minutes ago.

‘If there is going to be any issues it will happen within the next two to three months. They give you a little vial to put your sample in and that will let you know after three months if you’ve got any viable sperm left in your canal.’

After sharing the video, which has now been watched almost 700,000 times, G The Warlock decided to make a follow-up video about why they made the decision in the first place. 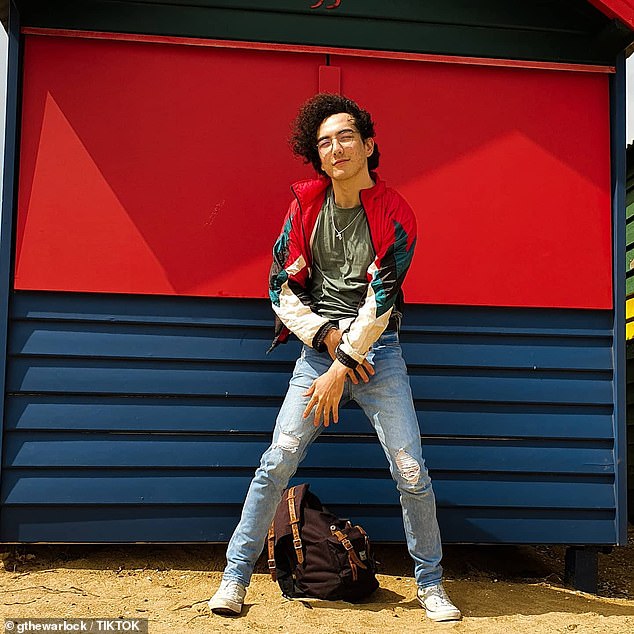 After sharing the video, which has now been watched almost 700,000 times, G The Warlock decided to make a follow-up video about making the decision in the first place

‘I don’t really want kids to be honest. And if I do there is always that chance I can get it reversed and if not, I can adopt a kid.

‘Other forms of birth control lead to stealthing, with a condom, or if you’re on the pill or the bar or IUD you’re probably going to have to deal with hormonal things which isn’t something that bothers men but it’s going to bother most of their partners if they’re straight.’

Plenty of G The Warlocks followers had opposing views on whether the procedure was a good idea or not, with some women saying they found it near impossible to get a hysterectomy when they were young.

‘Meanwhile as a woman in Australia I’d like a hysterectomy for health reasons and am told no straight out,’ one woman said.

‘Hubby trying to get one but docs say no because he’s 32 and might want more kids one day. How did you get one under 30?’  another said.

‘Still risky if you want to have kids one day. Only a 75 per cent chance reversal will be successful and you’ll have kids,’ a third added.

While another said: ‘We LOVE a responsible king! Long acting birth control is ROUGH for women so this is a big yes’.

G clarified that they did encounter a number of obstacles trying to get the vasectomy in the first place.

‘I had lots of GPs telling me I’m too young, it was a waste of money or I’d regret it. So I went to a specific vasectomy clinic,’ they said. 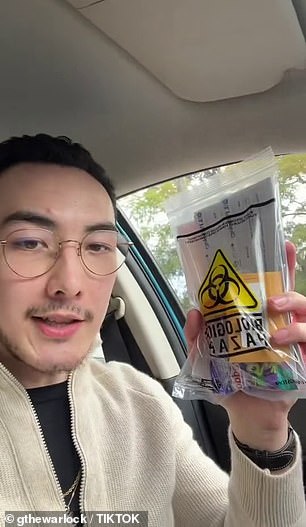 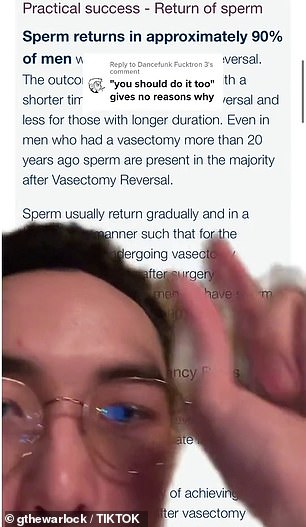 ‘I had lots of GPs telling me I’m too young, it was a waste of money or I’d regret it. So I went to a specific vasectomy clinic,’ they said

‘The medical field has heaps to improve on and it has so much ingrained misogyny. I highly encourage discourse. I think it’s ridiculous you can’t get a hysterectomy because people think you “might want to have kids”.

‘It’s one of the reasons I’m pushing for those who produce sperm to step up to the plate.’

In Australia vasectomy reversals result in pregnancy, if that is the desired outcome, in 90 per cent of couples.

If you have health insurance and Medicare the out of pocket cost is usually around $4,400. For those without insurance, $7,800.