Hundreds of hospital staff lined streets to pay their final tribute to a ‘devoted’ father-of-four surgeon after he died from coronavirus aged 58.

Touching footage captured from Sadeq Elhowsh’s hearse shows medical workers standing in a row along the pavement to pay their respects on Tuesday.

The staff then burst into a round of applause for the orthopaedic surgeon, who worked at St Helens and Knowsley Teaching Hospitals NHS Trust in Merseyside.

Doctors, nurses, hospital staff and patients gather together outside Whiston Hospital to pay respects to Sadeq Elhowsh, who died on April 20 after contracting coronavirus

NHS workers, some wearing PPE, and patients lined the road, hospital driveway and stood in every facing window in tribute to Mr Elhowsh as his hearse drove past the doors of his place of work.

The video was shared on Twitter, captioned: ‘Seems the entire hospital came out to pay respect to colleague Mr Sadeq Elhowsh.’

The social media user added: ‘This is so humbling and beautiful.

‘Moments like this truly are the best side of humanity.’

In a tribute to Mr Elhowsh, who passed away on April 20 in the hospital he worked at for more than 17 years, his family said: ‘Sadeq was a wonderful husband as well as a devoted father and he dearly loved his family.

‘We cannot put into words the depth of our loss.

‘He loved his work and was dedicated to supporting his patients and his colleagues.’

Ravi Gudena, Mr Elhowsh’s colleague and a consultant orthopaedic surgeon, said: ‘Nothing was ever too much trouble for Sadeq, he was always there to help anyone and was happy to do whatever was needed to help his colleagues and patients.’ 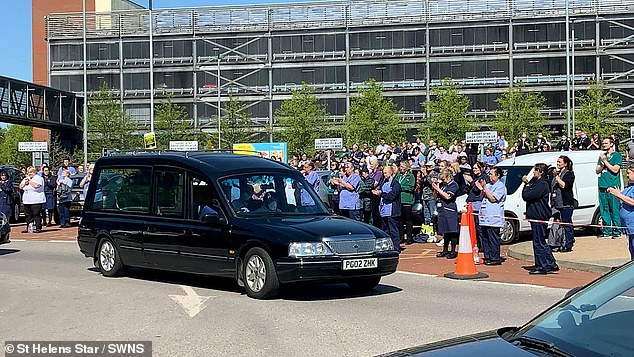 Mr Elhowsh’s hearse pictured as medical workers erupt into applause for the surgeon, who worked at St Helens and Knowsley Teaching Hospitals NHS Trust in Merseyside 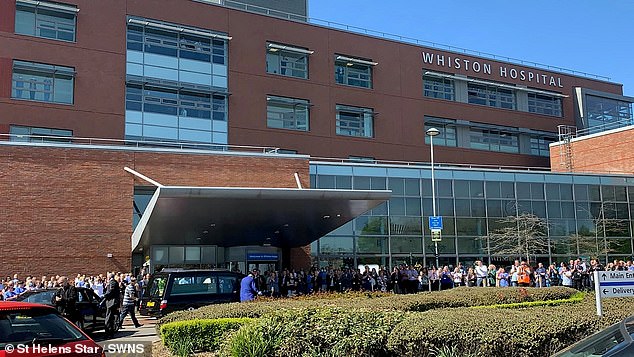 Mr Elhowsh’s hearse drove past the doors of Whiston Hospital, where he worked, with his fellow colleagues lining the road, hospital driveway and standing in every facing window

Hospital chief executive Ann Marr OBE added: ‘Sadeq will be sadly missed by all who knew and worked with him. He was without doubt a much-loved member of the team.’

A GoFundMe page created by the surgeon’s colleagues in support of his family and his son’s education at medical school has raised over £71,000 at the time of writing, reaching over £50,000 within 24 hours.

Part of the description says Mr Elhowsh was ‘always there to help any one’, adding: ‘His famous quote is “don’t worry I will sort it”. 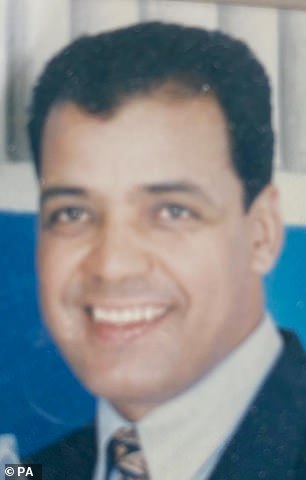 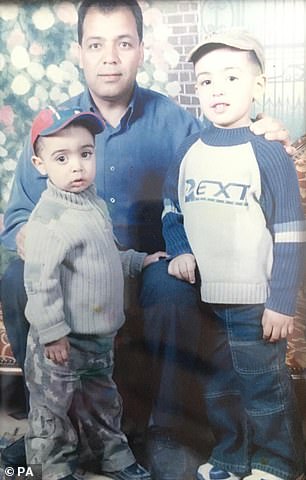 Mr Elhowsh pictured left and right, with his two sons. In a tribute to the surgeon, who died in the hospital he worked at, his family said he was a ‘wonderful husband’ and ‘devoted father’

The surgeon is one of six health workers announced to have passed away from coronavirus yesterday.

Josephine Peter, a nurse at Southport and Formby District General Hospital, has been described as a ‘heroine’ by her devastated husband after she died from the virus on Saturday, April 18.

According to a GoFundMe page set up to honour Mrs Peter, who worked as a nurse for 20 years, she leaves behind her husband Thabo, her two children Bongani and Buhle who live in South Africa and a granddaughter.

She was raised in Johannesburg, South Africa during Apartheid where, according to the fundraising page, she was ‘whipped and humiliated by the then white ruling party’ but she never let it break her spirit.

She had been working at Southport hospital since February on an agency contract until she fell ill in early April. 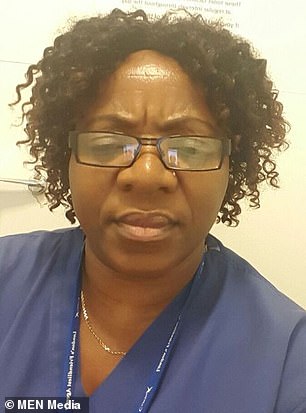 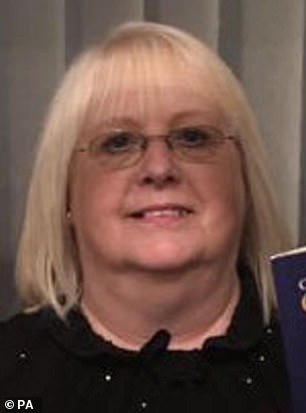 Josephine Peter (left), a nurse at Southport and Formby District General Hospital and Liz Shale (right), an NHS administration worker, were announced to have died from the virus yesterday 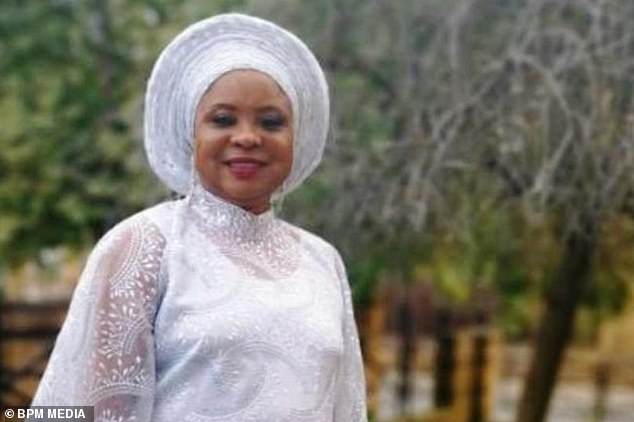 Juliet Alder, who worked at the Hammersmith and Fulham Mental Health Unit supporting older people in the last weeks of their life, died from coronavirus aged 58 on Tuesday, April 14

Her family, who described her as ‘loving and crazy’ pleaded with people to ‘take this virus seriously’ after they were unable to visit and say goodbye to her before she died at St James’s University Hospital and will have to watch her funeral via video link due to new restrictions.

The grandmother-of-eight worked for the NHS for more than 20 years and spent the last decade working in palliative care in Bradford.

Another victim, Kirsty Jones, 41, had been working as a healthcare assistant and recently taken up a position in one of Lanarkshire’s Assessment Centres, based in Airdrie Health Centre, to help in the frontline response against the pandemic. 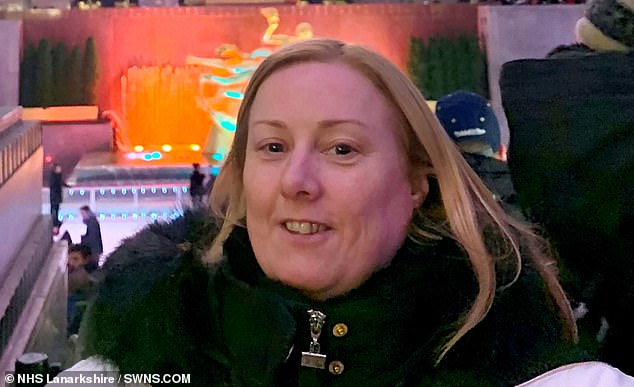 Kirsty Jones, 41, was working at an assessment centre helping in the frontline response. She leaves behind her husband Nigel and two sons, Sam age 14 and Finlay, four 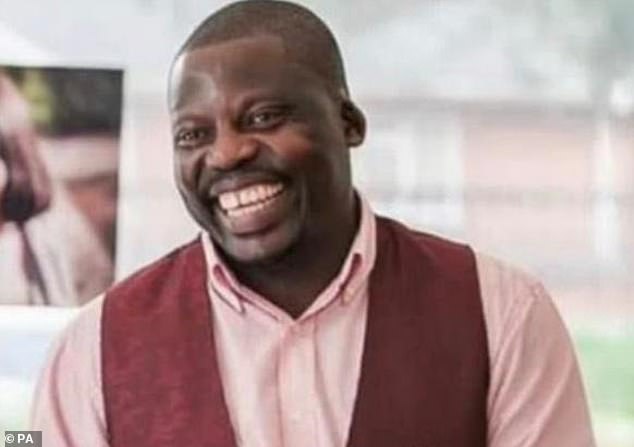 Khulisani Nkala, 46, worked as a mental health nurse for the Leeds and York Partnership NHS Foundation Trust and was the first staff member at the trust to die from the virus

Her death sees her leave behind her husband Nigel, and two sons, Sam aged 14 and Finlay, four.

Tributes have also been paid to Khulisani Nkala, a mental health nurse who died on Friday.

The 46-year-old was the first staff member at Leeds and York Partnership NHS Foundation Trust to died from the virus.

Juliet Alder, who died from coronavirus aged 58 on Tuesday, April 14, worked at the Hammersmith and Fulham Mental Health Unit supporting older people in the last weeks of their life.

She is the first member of the team to die from Covid-19, leaving behind her husband and daughter, and was described by her colleagues as ‘kind, caring and thoughtful.’