A Melbourne mother has been left shocked after finding an illegal vape pen in her seven-year-old’s school bag.

Paige had initially mistaken the device for a ‘sour lolly’ due to its bright colours and illustrations that she claimed were being used to appeal to children.

However, after doing some research she discovered it was a vape pen that contained a whopping 50mg of nicotine, about the same amount as five cigarettes.

‘How can cigarette packets be required to label nicotine usage and have horrible pictures on them but vapes just look like lollies?’ Paige told 9News. 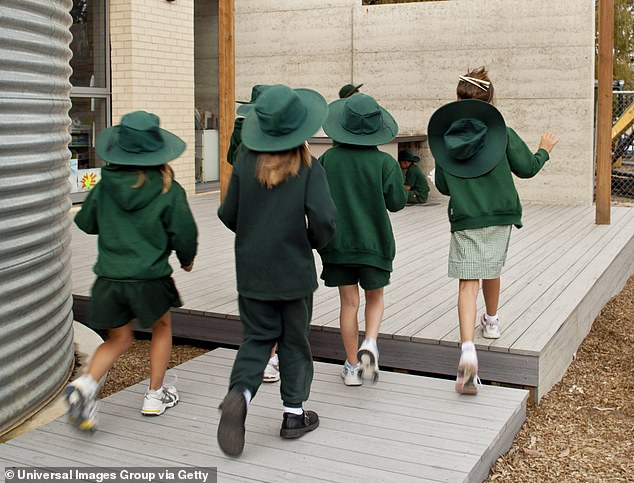 In good news for the concerned mum, her young son had not used the vape and had simply brought it home after finding it on his school’s basketball courts (stock image of school kids)

In good news for the concerned mum, her young son had not used the vape and had simply brought it home after finding it on his school’s basketball courts.

She said her son also thought it was a lolly.

When she told the school principal about the discovery they said similar incidents had been reported where older students were leaving the vapes on school grounds.

Paige is just one of hundreds of concerned parents across the country who worry the devices are harming the health and wellbeing of their children.

While vape pens are illegal in Australia, a booming black market means teenagers can purchase them without a prescription through avenues like social media.

The colourful e-cigarettes can be bought in a variety of flavours and can be easily concealed in pockets or school bags due to their compact size.

However, experts warn some pens contain as much nicotine as ten cigarettes and can cause adverse effects like heart and lung problems and even seizures. 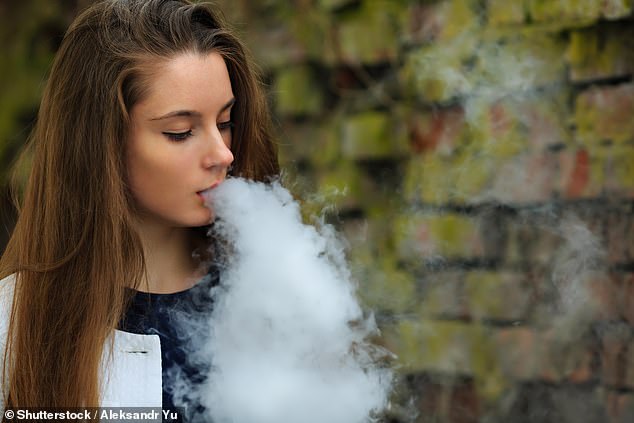 Top doctor Kerry Chant has declared a war on illegal vapes with more than $1million worth of e-cigarettes and liquids seized this year (pictured, a woman smoking an electric cigarette) 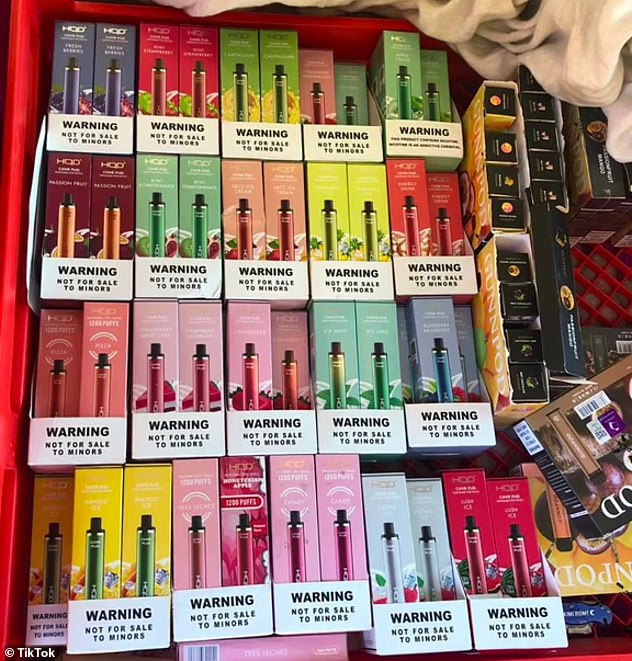 More than $3million worth of illegal vapes and vaping products have been seized in a series of raids since July 1, 2020 (pictured, a display of flavoured electric cigarettes)

Earlier this month, a ‘perfectly healthy’ teenage boy suffered a seizure from a huge dose of nicotine while he was vaping in his school’s toilets.

The student was rushed to hospital after he was found at Blue Mountains Grammar and has recovered, but could have long-lasting brain damage.

Last October, the federal government introduced a ban on nicotine pens being imported into Australia or sold to anyone without a prescription over concerns about the chemicals inside the popular products.

The decision was widely scrutinised at the time, with experts suggesting it will do little to stop the extensive use of vapes in Australia.

There are about 700,000 vapers across the country, making it one of the most lucrative markets for manufacturers and distributors in the world.

However in the eight months following the ban, members of the Border Force have intercepted and seized almost 250,000 of the devices. 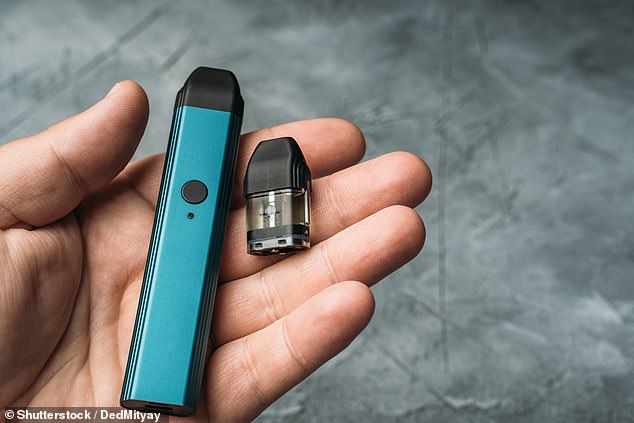 Teenagers have been warned about the dangers of vapes after research showed young people thought vaping was a healthier alternative to smoking cigarettes (pictured, a vape pen)

In May, NSW Police said they had confiscated $3million vapes since July, 2020.

NSW Health has also waged a war on e-cigarettes with chief health officer Kerry Chant in May warning she would take a ‘zero tolerance approach’ to suppliers.

‘[NSW Health is] cracking down on the illegal sale of nicotine e-cigarettes and liquids and taking a zero-tolerance approach to those who sell them,’ she said.

Retailers have been put on notice and warned they will be punished with heavy fines or jail time if they breach regulation.

‘You will be caught, illegal items will be seized, and you could face prosecution, resulting in being fined or even jailed,’ Dr Chant said. 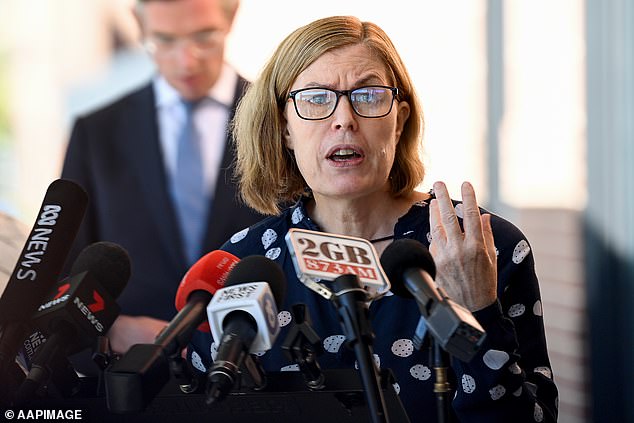 Dr Chant said too many young people were not aware of the true nature of vapes and simply believed they were ‘flavoured water’.

She said the pens actually contained chemicals that were so poisonous they could inflict life-threatening injuries on the smoker.

A anti-vaping campaign was launched in NSW after global research revealed young people commonly think vaping is a healthier alternative to smoking.

The Get The Facts – Vaping toolkit targets students aged 14 to 17 and provides resources for teachers and carers to start conversations on the dangers of vaping.

About 11 per cent of Australians aged between 16 and 24 consider themselves regular vape users, double that of 2020.

Banned levels of ingredients linked to harmful lung diseases such as ‘popcorn lung’ have been found in nearly a third of vapes sold in Australia.

The Therapeutic Goods Administration found 31 per cent of the 214 e-cigarettes it analysed had chemical concentrations that exceeded the legal limit.

Those substances included the additives vitamin E acetate and diacetyl, which is widely linked to a rare condition called bronchiolitis obliterans that damages the small airways in the lungs.

The disease is nicknamed ‘popcorn lung’ because diacetyl used to be added to microwave popcorn as a food colouring. 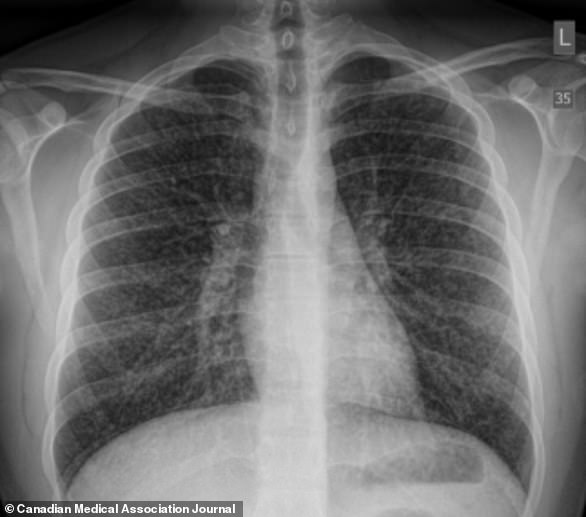 A spokesman for the government body said the banned ingredients were known to cause lung damage in the form of bronchiolitis obliterans and EVALI.

EVALI – which stands for e-cigarette or vaping product use-associated lung injury – is thought to be caused by vapes containing tetrahydrocannabinol (THC), a psychoactive substance also found in marijuana, and vitamin E acetate. 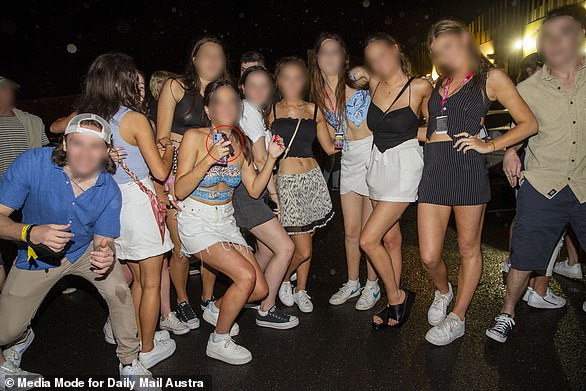 Australian teens hooked on addictive e-cigarettes have been urged to quit vaping immediately, as thousands of the pens are sold everyday despite nation-wide bans

The law also made it illegal to purchase nicotine vapes without a prescription.

The new laws are set to curb the risk of nicotine vaping uptake in young adults, while also allowing current smokers to access the products for smoking cessation, according to the Therapeutic Goods Administration (TGA).

There are still two ways prescription holders can obtain nicotine vaping products in Australia; from a pharmacy or importing from overseas websites.

Prescriptions can only be written by one of 80 authorised prescribers, or by a doctor with approval under the TGA’s Special Access Scheme B.

An authorised prescriber of nicotine vaping products must be a GP who is registered with the Therapeutic Goods Administration.

Despite disapproval from vaping advocates, the new laws are being supported by The Australian Council on Smoking and Health (ACOSH).

‘ACOSH strongly supports any measure that will effectively stem the flow of illegal disposable e-cigarettes into Australia that are being used by an increasing number of children and teenagers,’ said Chief Executive Maurice Swanson.

‘There is growing concern about the use of e-cigarettes among children and teenagers.’