BREAKING NEWS: Hope Hicks has tested positive for coronavirus after traveling with Trump on Air Force One

By Jenny Stanton and Lauren Fruen For Dailymail.com

Hope Hicks has tested positive for coronavirus after traveling with Donald Trump on Air Force One to and from Tuesday’s debate, sources have said.

Hicks, 31, who serves as counselor to the president and also traveled with him to a Wednesday rally, tested positive Thursday, according to an administration official, who spoke on condition of anonymity to discuss private health information.

She is the closest aide to Trump to test positive so far. She previously served as White House communications director and re-joined the administration this year ahead of the election. There is no indication the president has the virus.

Hicks traveled with the president multiple times this week, including on Marine One, the presidential helicopter, for the Minnesota rally Wednesday, and aboard Air Force One to Tuesday night’s first presidential debate in Cleveland.

She was spotted getting off Air Force One in Cleveland without her mask.

The White House did not immediately respond to multiple questions about the last time Trump was tested and whether he and other staffers who spent time with Hicks in recent days will be asked to quarantine.

Hope Hicks (far right) is pictured walking to Marine One alongside Jared Kushner, center, to depart from the South Lawn of the White House in Washington DC on Wednesday 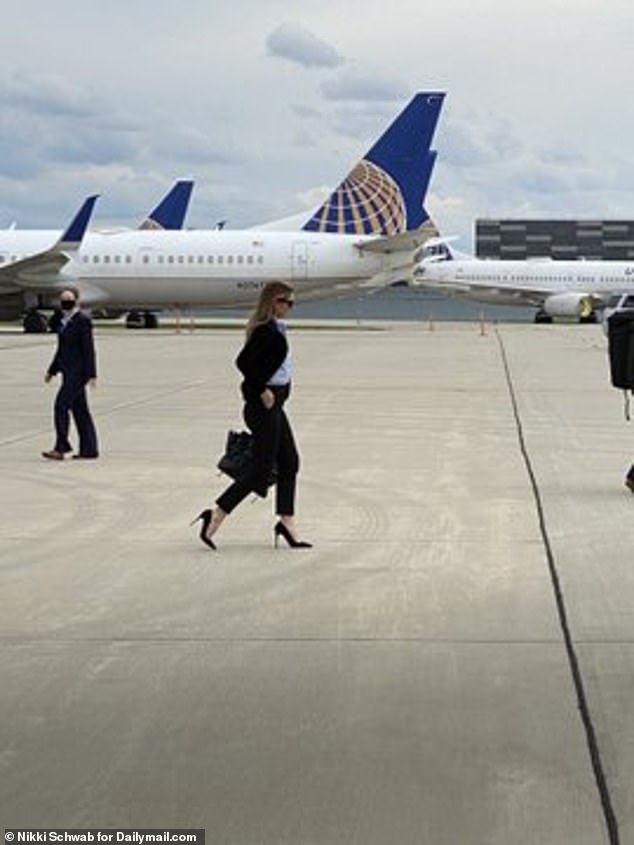 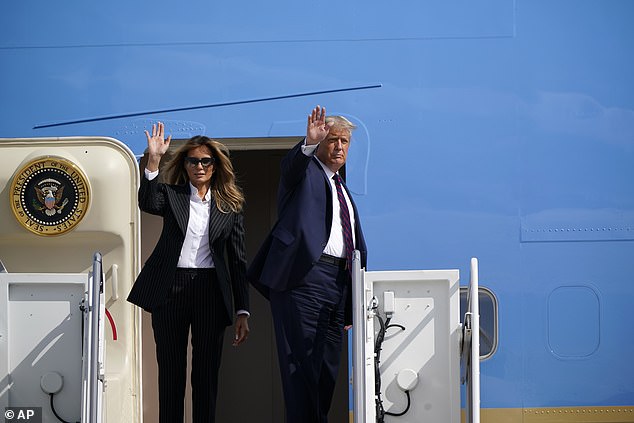 TIMELINE OF HICKS’ TRAVEL WITH THE PRESIDENT

Saturday, September 26:  Hicks traveled with the president to a rally in Pennsylvania

Tuesday; Hicks was aboard Air Force One with the president to travel to night’s first presidential debate in Cleveland. She is seen leaving the jet without a mask

Wednesday; Hicks traveled with Trump to a rally Minnesota on Marine One where she is said to have worn a mask

White House spokesman Judd Deere said: ‘The president takes the health and safety of himself and everyone who works in support of him and the American people very seriously.

‘White House Operations collaborates with the physician to the President and the White House Military Office to ensure all plans and procedures incorporate current CDC guidance and best practices for limiting Covid-19 exposure to the greatest extent possible, both on complex and when the president is traveling.’

Deere did not mention Hicks by name.

Hicks was seen Tuesday in a car without her mask with White House senior adviser Stephen Miller and campaign adviser Jason Miller.

She is said to have worn a mask when on Marine One with Trump.

Her positive test was first reported by Bloomberg News.

Hicks joined 20 to 30 aides and family members, including the president’s son Don. Jr, on board Air Force One Tuesday. 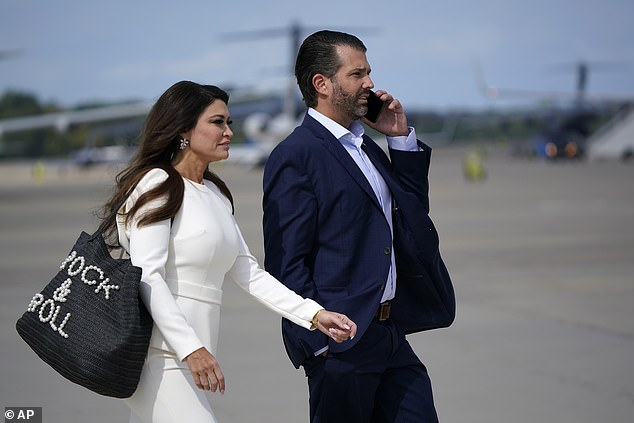 Donald Trump Jr. and Kimberly Guilfoyle walk across the tarmac to board Air Force One at Andrews Air Force Base before flying to Cleveland for the first presidential debate Tuesday

Hicks is understood to be experiencing symptoms of the disease. 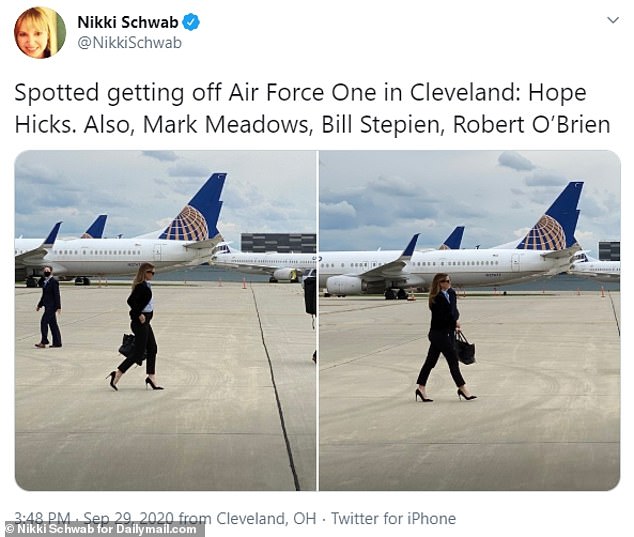