Honda has halted production at its Swindon plant due to a shortage of car parts after chaos at the ports sparked by a new lorry booking system and a lack of shipping containers – in part due to Covid-19.

The factory, which is responsible for production of the Honda Civic, depends on parts arriving as and when they are needed, rather than buying in bulk.

But disruption at the Port of Felixstowe has had a knock-on effect on deliveries.

The delays have been blamed on a new booking system at Britain’s biggest container port on a booking system which hauliers say doesn’t work, preventing them from getting on to the site in Suffolk.

Haulage experts say delays have been brought on in-part by uncertainty over a Brexit deal and ongoing problems due to the coronavirus pandemic.

Honda’s Swindon factory is responsible for production of the Civic, a spokesman for the Japanese car giant said it hoped to reopen ‘as soon as possible’

A statement on the port’s website reads: ‘The Port of Felixstowe, like other major container ports worldwide, is still experiencing a spike in container volumes and dealing with the consequences of the ongoing Covid pandemic.

‘In addition we have had a high number of slow moving containers of PPE occupying storage space.

‘The current high volumes are expected to last into the New Year and we are working hard to minimise the impact on daily operations and to maintain vital supply chains.’ 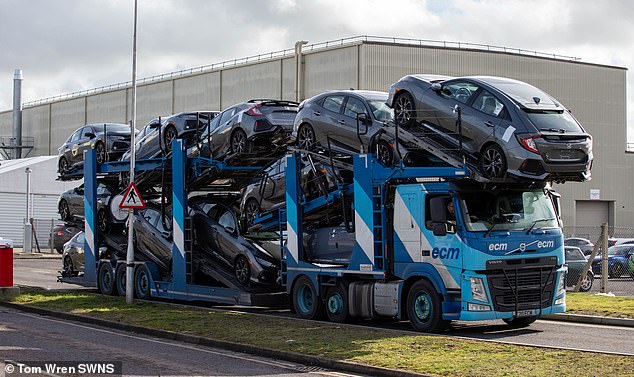 Delays at the Port of Felixstowe have shifted dependency onto sites in Southampton and the London Gateway – but with ongoing problems, some items are being shipped elsewhere in Europe before returning to the UK.

Honda has told staff it will pause production today.

A spokesman from the Japanese car giant told the BBC: ‘The situation is currently being monitored with a view to restart production as soon as possible.’

He said: ‘You’ve got the Christmas rush, it’s always a busy time in logistics, you’ve got coronavirus which is still causing supply chain disruption, not only in the UK and Europe but around the world, and now you’ve got customs, or rather the uncertainty around customs.

‘Businesses are taking commercial decisions around when to move their goods in and out of the UK in case there is no deal.

‘There’s an imbalance of containers, this is really invisible to the every day punter, but it really is about these big boxes that are used to move goods around. 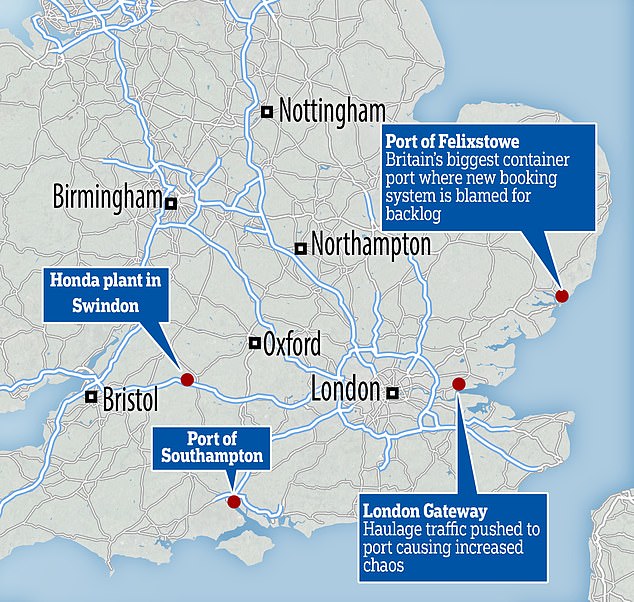 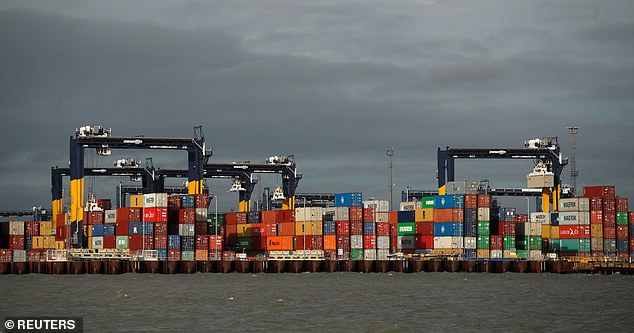 Disruption brought about by the coronavirus, uncertainty over Brexit and a much-maligned booking system at the Port of Felixstowe (pictured) have all caused delays on goods being imported into Britain

‘This whole year has seen disruption in the container shipping market due to the initial shut down of production in China, then the restart.

‘Then you had a situation with the goods arriving when Europe was in lockdown.

‘It’s been a bumpy ride all year and it’s still taking some time for the supply of containers to return to its normal process and arrangements.

‘Businesses who are buying and selling to and from the EU are having to make commercial decisions now on the basis of a great deal of uncertainty. 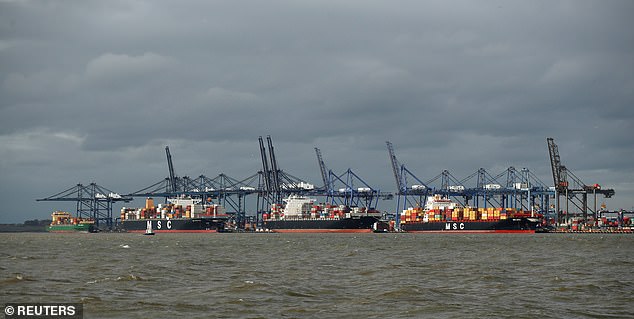 Cargo that is unable to to arrive at British ports is usually ferried to a large nearby ports such as Rotterdam and later returned to Britain, causing additional delays

‘If you are trying to bring things into this country you have an incentive to do it now because it may well be in three weeks time you’re paying quite high import taxes on those goods.’

Cargo that is unable to to arrive at British ports is usually ferried to a large nearby ports such as Rotterdam and later returned to Britain, causing delays.

Delays at ports have also caused disruption in ginger supplies at supermarkets.

Asda said delays in November caused a ‘temporary shortage,’ but it now had a ‘good availability going forwards’.