This is the moment a professional footballer kicks over a homeless woman’s begging up and drenches her in water after she hurled racist abuse at him.

The video begins showing the young white woman begging for change outside Queensway Underground Station in west London when she was confronted by Wealdstone FC footballer Ryan Gondoh who accused her of calling him a ‘black c***’.

After initially denying it, she repeatedly called him the N-word prompting him to retaliate by kicking her begging cup over and calling her a ‘tramp’.

He then left before returning with a bottle of water and poured it over her head, as she ran inside the station to get away. 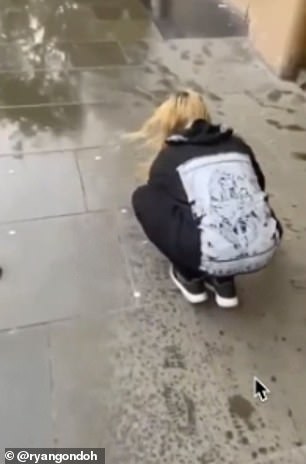 It appears the altercation happened after she accused Gondoh of not giving her enough money – calling him ‘greedy’ before unleashing her racist tirade.

Footage filmed by the footballer was posted on social media yesterday and has since gone viral, with more than 200,000 views.

It shows Mr Gondoh approaching the female beggar outside the station entrance, as he repeatedly asks: ‘What did you call me?’ before replies ‘I called you greedy, darling.’

To which he responds: ‘No, what else did you call me?’

She denies calling him anything else, but he insists: ‘No, you called me a black c***, you little tramp. Didn’t you?’

The woman lays a pile of newspapers on the wet pavement and sits down holding her begging cup, as Mr Gondoh continues to challenge her on camera. 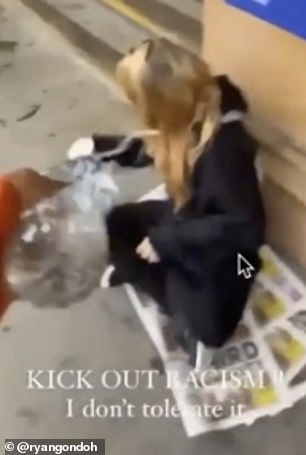 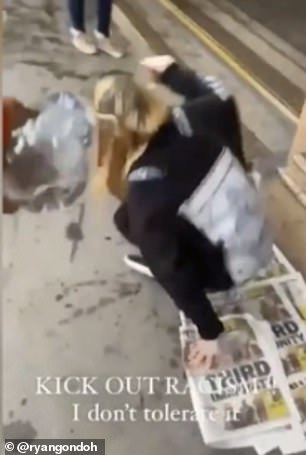 Pictured: Gondoh calls her a f***king b**** and a tramp as he pours the water over her head

He asks how much money she has in her cup and she says: ‘Not much, that’s why I’m calling you greedy.’

The man then offers to ‘put more in’ and asks: ‘How much do you want?’

She answers: ‘I want somewhere to sleep.’

He says: ‘Well, you know when you call people n***** and be racist and all that? It ain’t gonna get you far in life.’

He promises to put five pounds in her cup but when she puts it down on the ground he kicks it over, scattering the contents across the footpath.

As she hurriedly picks up her coins, he says: ‘You ain’t getting nothing you little tramp. The old me would’ve kicked you in your f****** head, you little sket. 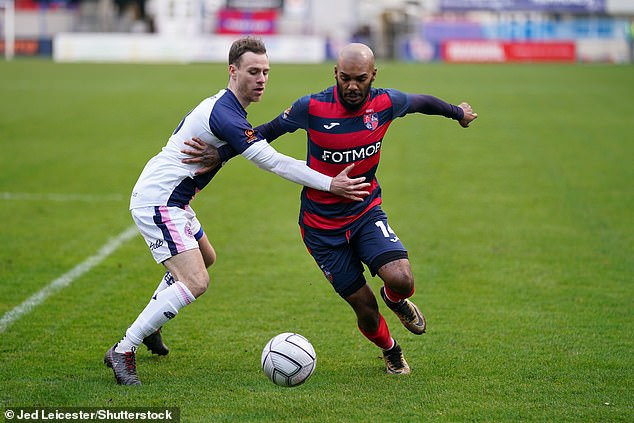 Ryan Gondoh, who shared the video on his personal Twitter page, (pictured when on loan to Hampton and Richmond Borough in 2020) currently plays as a forward for Wealdstone FC

A second clip shows him returning a short while later, claiming he has ‘come to apologise’.

He then pulls out a bottle of water and empties it over her head, forcing her to flee inside the station.

‘That’s what you get. Come out here, then. Come and sit down here again.’

The man kicks over her pile of newspapers and repeatedly shouts ‘I’ma (sic) shame you’ – before the footage is cut when another man intervenes.

Viewers on social media were critical of both parties with some condemning the woman’s behaviour but stating Mr Gondoh should have reported her to police.

One said: ‘Her racist words don’t warrant him assaulting her.’ 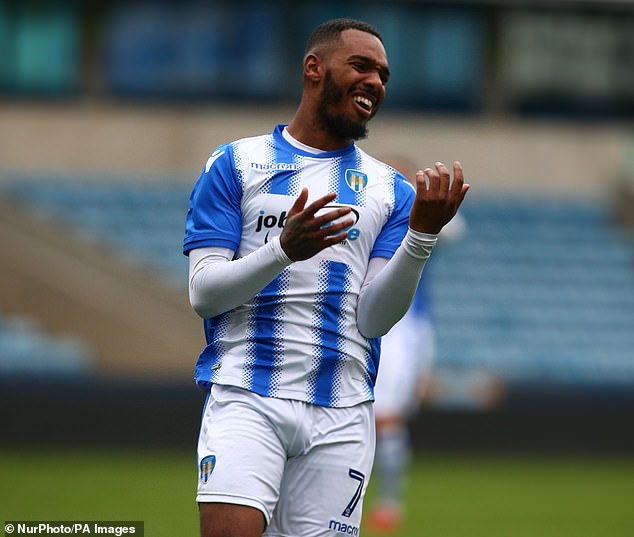 Ryan Gondoh, pictured here playing for Colchester United in 2018, has since received more racist abuse online after sharing the footage online but has also received messages of support

Another wrote: ‘She is horrible for being racist and he is a horrible person.’

A third commented: ‘I’m sorry you experienced this, racist language and behaviour should be condemned.

‘It’s a shame you’ve gone about it by using misogynistic slurs and physically threatening a homeless person who is obviously not right in the head.

‘You both dehumanised each other, a sad sad scene.’

One Twitter user wrote: ‘I agree she was in the wrong but the way he reacted is not cool. He should have walked away and reported it and let the officials deal with it.’

Others defended the footballer’s actions with one writing: ‘Easy to say when you ain’t in the situation.

‘I’m sure people would have done a lot worse. I think she’s lucky with water on her face, regardless if she’s homeless or not.

‘I’ve met nice/genuine homeless people. No one deserves to feel less about their skin colour.’

Another added: ‘The fact that people are even saying this is wrong on Ryan Gondoh’s part is a shambles. Luckily, he remained as calm as he did.’

Mr Gondoh has shared since shared screen grabs showing vile racist messages he says he has been subjected to since he shared the footage.

Some of the messages show other Twitter users have called the 23-year-old the N-word while making other appalling remarks regarding his skin colour.

Responding to the abuse, Mr Gondoh said: ‘So the second we react to the racial abuse we receive, we’re in the wrong? It doesn’t make sense.

‘I can’t imagine what the likes of [Manchester United star] Pogba and that go through.’

Wealdstone FC, the Metropolitan Police and British Transport Police have been approached for comment.