Demand for buying new homes has fallen by 15 per cent in the last two weeks, according to Rightmove, in the wake of the mini-Budget that rocked the UK economy.

The property portal said that, while buyer demand was still 20 per cent higher than in the same period in 2019, it had fallen 15 per cent compared to the same two weeks in 2021.

Despite this, home sellers continued to push asking prices higher over the month to reach a new record high of £371,158

Demand down: The number of buyers seeking a new home fell 15% in October, according to the property website Rightmove

Price decrease: Homes for first-time buyers and ‘second steppers’ saw their asking prices go down marginally, according to Rightmove

Looking at typical asking prices, Rightmove said that the average UK home gained 0.9 per cent or £3,998 in the last month. This was less than the five-year average for October of 1.2 per cent.

Year-on-year, prices increased by 7.8 per cent, down from 8.7 per cent in September.

First-time buyers appeared to be hit the hardest by the economic turmoil sparked by the Government’s announcement, which has sent mortgage rates soaring.

Among first-time buyers, demand for buying homes fell 21 per cent compared to 2021.

First-time buyers typically have the tightest budgets of all home purchasers as they do not have equity from an existing property to draw on, as well as paying the highest mortgage rates.

‘The rapid rise in average mortgage interest rates has understandably caused some would-be home-movers to pause their plans and wait to see how the next few weeks and months unfold,’ its report said.

Mortgage rates had been steadily rising in recent months as the Bank of England pushed up its base rate in an attempt to combat rising inflation.

However, unfunded tax cuts announced in the mini-Budget and the resulting market reaction led to a more pronounced spike.

This came as yields on gilts – as UK government bonds are known – jumped due to investors demanding higher rates to lend buy Britain’s debt.

This influences mortgage pricing and combined with expectations that the Bank of England would have to push interest rates up even further, the scenario led to mortgages being pulled and repriced, with costs jumping. 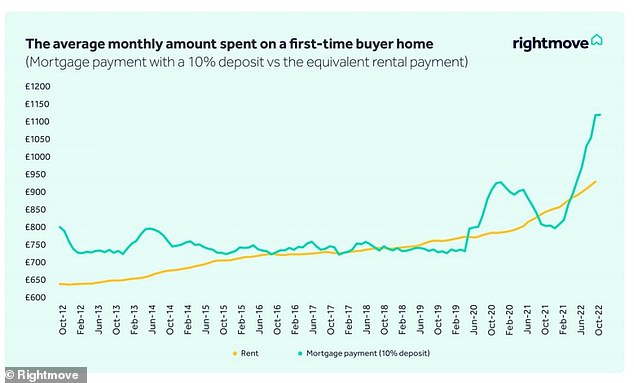 According to figures produced by financial analysts at Defaqto for This is Money, the cheapest interest rate available on a £150,000, two-year fixed mortgage for a house purchase with a 25 per cent deposit on 18 October 2021 was 1.19 per cent.

In real terms, this would mean the monthly mortgage payment would have risen by £363 in a year.

Prospective buyers and those remortgaging can see the latest rates available to them using This is Money and L&C’s mortgage calculator.

Despite the wider uncertainty, the majority of property sales and purchases that were agreed before the mini-Budget on 23 September are still going ahead, Rightmove said.

Only 3.1 per cent of sales agreed have fallen through in the two weeks since the mini-budget, in line with the 3 per cent figure over the same two weeks during 2019.

A new asking price record may seem surprising given the market uncertainty that followed the Government’s mini-Budget in late September, but it will take time for any impact to filter through

Agents and mortgage brokers have reported that property buyers are rushing to complete before their fixed-rate mortgage offers, which reflect the lower rates on the market pre-23 September, expire.

Rightmove said there were signs that prices were starting to reduce in some areas of the country and across certain property types.

The average price of a ‘second stepper’ home – which refers to those who are not purchasing their first or what is likely to be their last property – fell by 0.2 per cent in the last month, and the typical home in the North West of England saw its value decrease by 0.6 per cent. 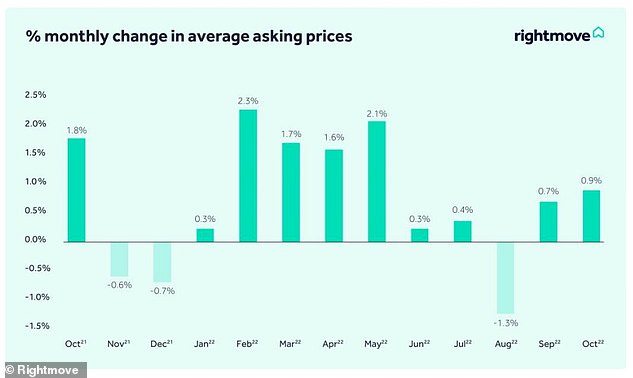 Asking prices: These increased 0.9% in October, up from 0.7% in September

Rightmove said: ‘A new asking price record may seem surprising given the market uncertainty that followed the government’s mini-budget in late September, but it will take time for any impact to filter through to house prices.’

Rightmove also said that there was little evidence of home sellers reducing the asking price of their properties. The number of homes seeing a reduction during the past month increased by 2 per cent to 23 per cent. The pre-pandemic five-year average was 32 per cent.

The property portal concluded that, while asking prices were likely to reduce in November and December, this was in line with normal seasonal price fluctuations. It said it was too early for it to make a prediction for where asking prices would sit in 2023. 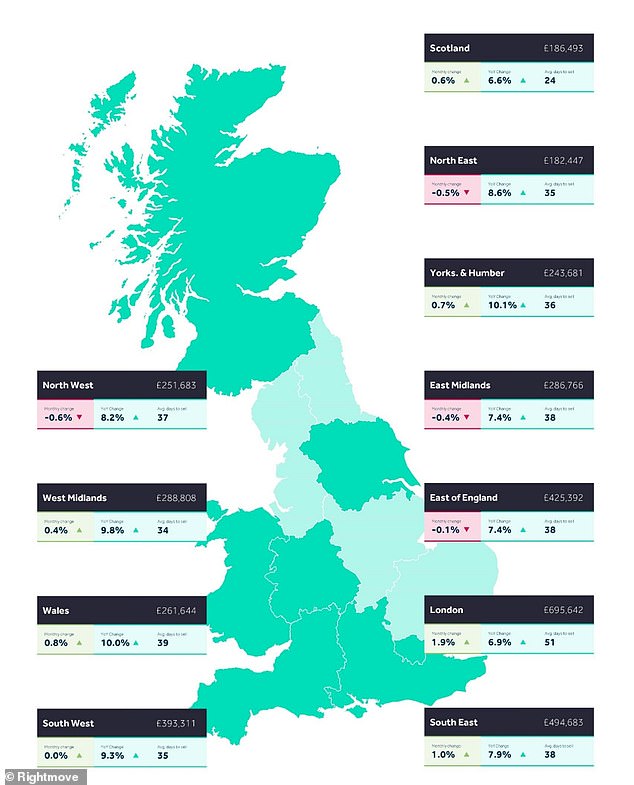 Region by region: Property asking prices continued to climb in some areas of the UK, while decreasing in others

Tim Bannister, Rightmove’s director of property science, said: ‘The vast majority of buyers who had already agreed their purchase are still going ahead.

‘Some aspiring first-time buyers will have had their plans dashed by the sudden nature of the mortgage rate rises, and now face a difficult situation with rents also rising, and a shortage of available homes to rent.

‘It’s understandable that some new movers who have the option to wait, may want a clearer view than they’re getting right now before they proceed with a major purchase such as a home.

‘With uncertainty over where mortgage interest rates will go, those who can still afford to proceed may decide that waiting too long could come at an even higher cost than taking action to move now, especially if the level of demand continues to outstrip supply and supports prices.’