While Paris is considered the ultimate weekend getaway for Britons, it is mystifying that the beautiful Champagne region has long been overlooked.

It was certainly not under-appreciated by Winston Churchill who famously rallied the troops by declaring ‘Remember gentlemen, it’s not just France we are fighting for, it’s Champagne!’

I too have come to love the region and its people as a frequent visitor to film a feature-length documentary about Champagne.

While Paris is considered the ultimate weekend getaway for Britons, it is mystifying that the beautiful Champagne region (pictured) has long been overlooked, writes Frank

The Champagne region has had a bloody history, with its lands ravaged and vanquished by Atilla the Hun, the Vandals, the Goths and the Russians.

Reims, its largest city, was on the front line during the Great War and its splendid Gothic cathedral was almost destroyed. It is ironic that the land, or terroir, that produces the drink most associated with celebration has endured such bloodshed over the centuries.

One of the main attractions of Reims is its proximity to Paris, which is only 80 miles away. It’s only a 40-minute train journey from central Paris or 30 minutes by TGV from Paris-Charles De Gaulle airport. All in all, it’s less than a three-and-a-half-hour train journey from London. Reims is home to several Grande Marque Champagne houses including Taittinger, Veuve Clicquot, Ruinart, Louis Roederer and Pommery, many of which are available for tours and tastings. 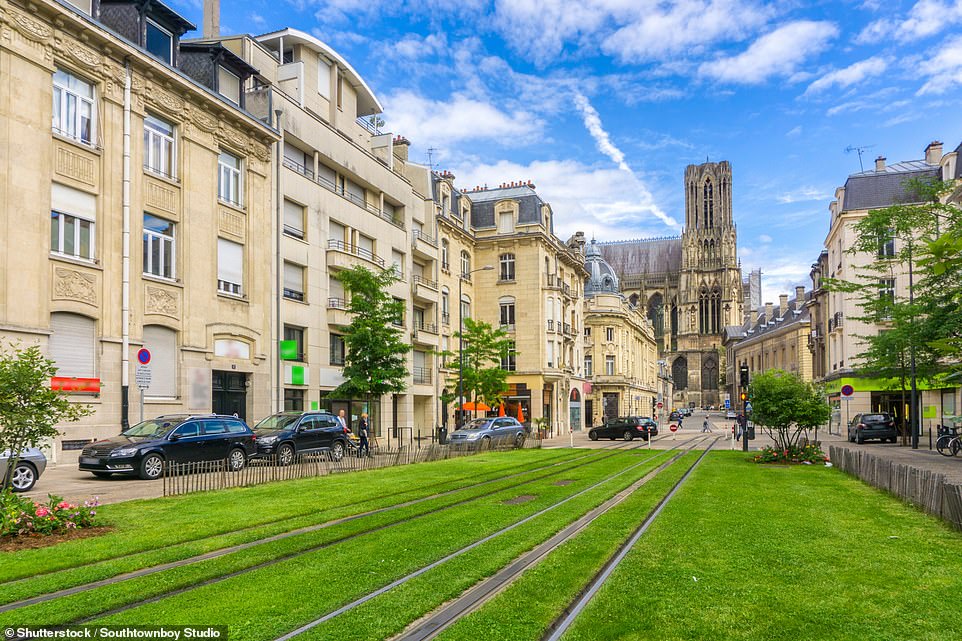 Pictured is the unofficial capital of the Champagne region – Reims. Known as the Coronation City

Champagne has been the coronation drink for French Kings since the 5th century when Clovis was crowned in the cathedral in Reims – known as the la Cité des Sacres, or the Coronation City, because that’s where kings were generally anointed.

Back then Champagne was a still red wine, it did not actually become a sparkling white until the time of the so-called ‘father of Champagne’, the Benedictine monk Dom Pérignon, in the 18th century.

Guided tours and tastings at many of the Champagne houses are available. Champagne Vranken Pommery with its impressive Elizabethan style castellated façade is worth a visit, as is Veuve Clicquot. The Widow Clicquot, the eponymous Veuve Clicquot, was a remarkable lady who came up with some innovations that are still used in the Champagne process to this day. She was the first to create a blended rosé Champagne as far back as 1818.

Take a peek at a widow 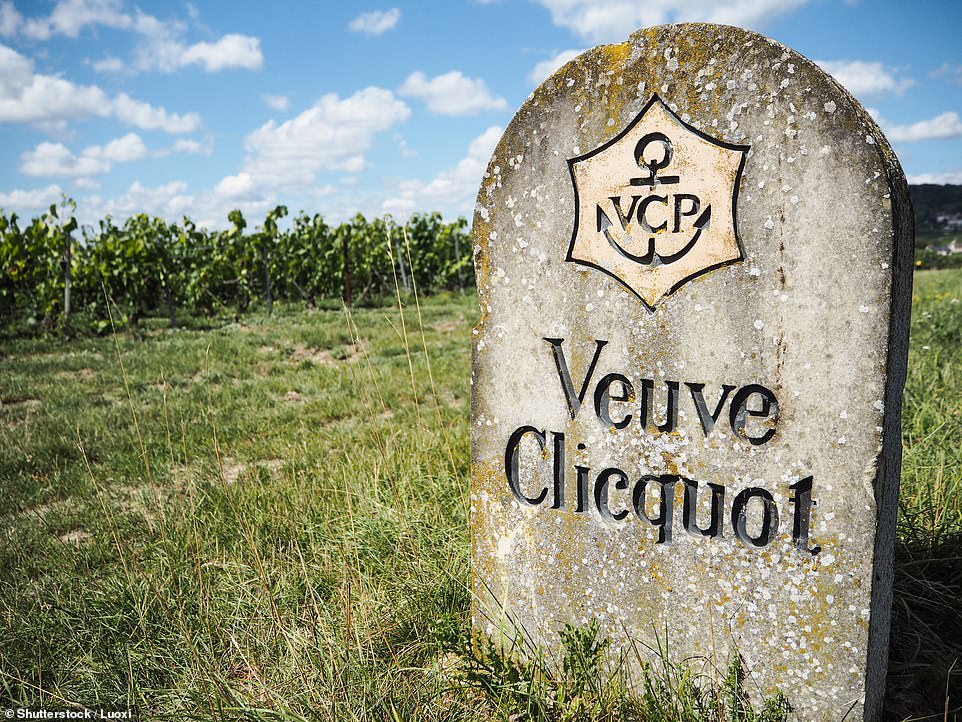 Champagne house Veuve Clicquot has 24kms (14 miles) of chalk quarries, or crayeres in Reims – vast maze-like underground tunnels that started life as chalk mines dug out to build the ramparts of the city

During the bombardment of the city in WW1, the denizens of Reims moved below ground to the remarkable chalk cellars that date back to Roman times.

Veuve Clicquot has 24kms (14 miles) of chalk quarries, or crayeres in the city – vast maze-like underground tunnels that started life as chalk mines dug out to build the ramparts of the city. During the Great War, thousands lived in Veuve Clicquot’s cellars for months at a time.

It housed a school, hospital and even a make-shift chapel. 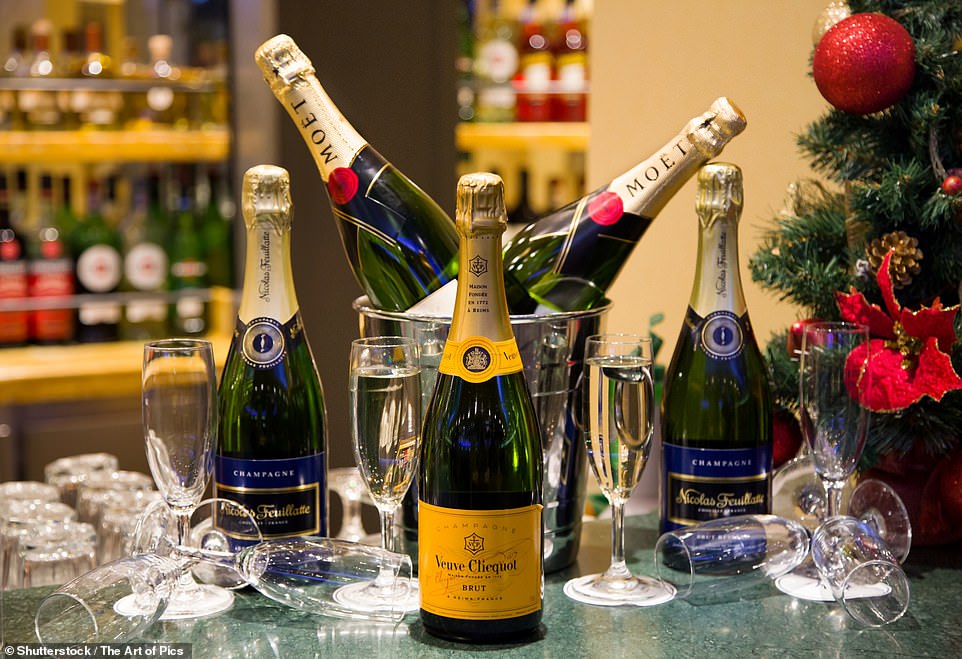 Some of France’s most famous Champagnes – Veuve Clicquot, Moët & Chandon and Nicolas Feuillatte 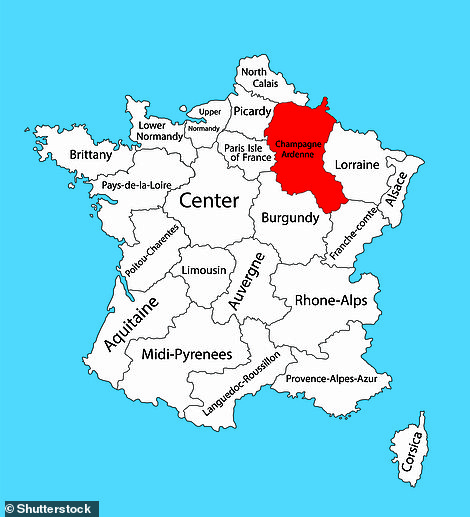 Champagne is easy to reach by train from Paris

It is now open for tours and visits – discover the history of the house followed by the tasting of a glass of Brut Carte Jaune and a non-vintage rosé.

At the family owned Taittinger, the tour of the cellars, once visited by an inebriated Peter the Great, concludes with a tasting of three flutes of Champagne.

After a visit to a Champagne house or two, a great place for lunch is Le Bocal. Situated at the back of a fish store near the city’s lively covered market, this reasonably priced restaurant is a surprisingly elegant place to eat. The dove-grey tea room streams with sunlight as locals eat at marble-topped tables.

There is no English-language menu, but charming waiters will bring generous portions of freshly caught fish, grilled dishes, bouillabaisse and its famed oysters (served raw with a mignonette sauce made in-house).

The most opulent place to stay in the city is Relais & Chateaux’s Domaine des Crayeres, built at the dawn of the 20th century for Louise Pommery, the Duchess of Polignac. This grand chateau has 20 exquisite rococo and Belle Époque-style rooms, with canopy beds, antique furnishings, and private stone terraces or balconies. It feels so luxurious and romantic that it is hard to imagine ever leaving.

But Philippe Mille’s two-Michelin-starred wood-panelled restaurant Le Parc, boasting an extraordinary wine cellar with over 600 Champagne varieties, makes leaving the room worthwhile. This is art de vivre at its finest.

If a stay here is beyond the budget, a great alternative would be to come dressed in white for an elegant evening of music and entertainment, the Soiree Blanche or White Night, on midsummer’s evening in June each year. It is sponsored by Champagne Lanson, and it is a fun celebration of the start of summer in the 17 acres of parkland in the hotel’s estate.

The most drinkable street in the world 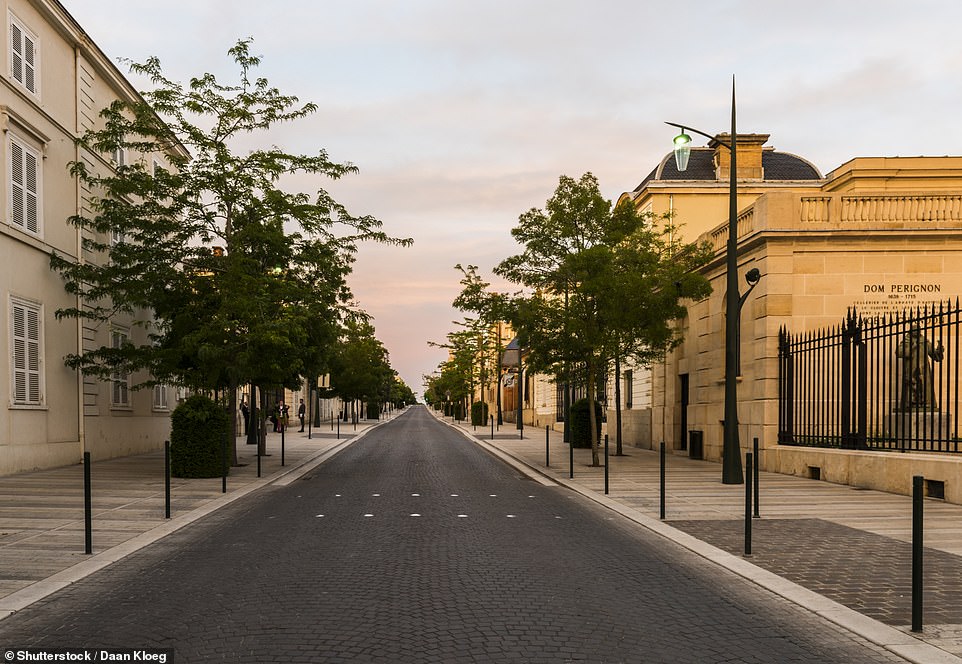 The Avenue de Champagne, pictured, in Epernay is home to some of the top Champagne houses. Churchill described it as the world’s most drinkable street

30 minutes’ drive from Reims is Epernay. The Avenue de Champagne in Epernay was described by Winston Churchill as the most drinkable street in the world.

It’s a wonderful boulevard and home to Pol Roger (Churchill is estimated to have drunk over 40,000 bottles in his lifetime), Moët & Chandon (a tour to its cellars is de rigueur) and Champagne De Venoge.

It is also the most expensive street for insurance purposes in France, as millions of bottles of Champagne are stored in the underground cellars below the street. 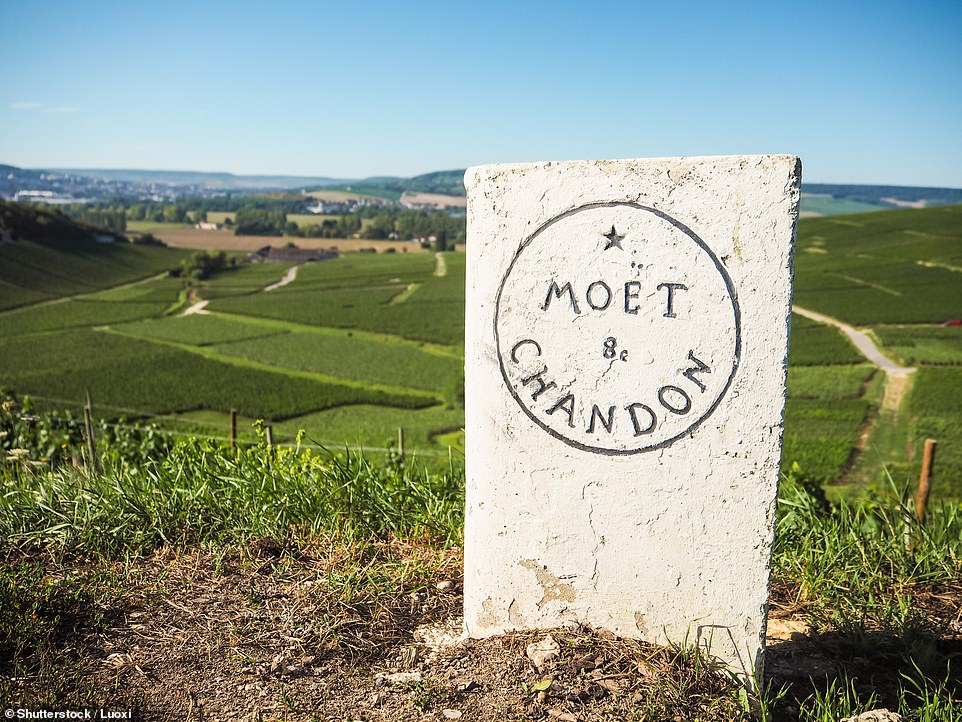 The Moët & Chandon vineyards, near Epernay.  Jean-Rémy Moët, who inherited the Champagne house in the 18th century, was great friends with Napoleon

Napoleon was close friends with Jean-Rémy Moët of Moët & Chandon fame. The great emperor was a frequent visitor to the region, oftentimes arriving before he went into battle, stocking up on thousands of bottles of Champagne to fortify his troops.

As fate would have it, one of the few times he did not make it to Epernay was before the Battle of Waterloo. Who knows if the course of history was changed by the absence of Champagne!

Napoleon seemed to have anticipated this situation as he is reputed to have said: ‘Always carry Champagne! In victory you deserve it and in defeat you need it!’

Napoleon once stayed in the lodge that is now home to the impressive five-star Royal Champagne Hotel and Spa.

Perched on a hilltop overlooking the Unesco World Heritage-protected vineyards, this award-winning modernist quartz-and-glass hotel is the best new hotel in northern France. 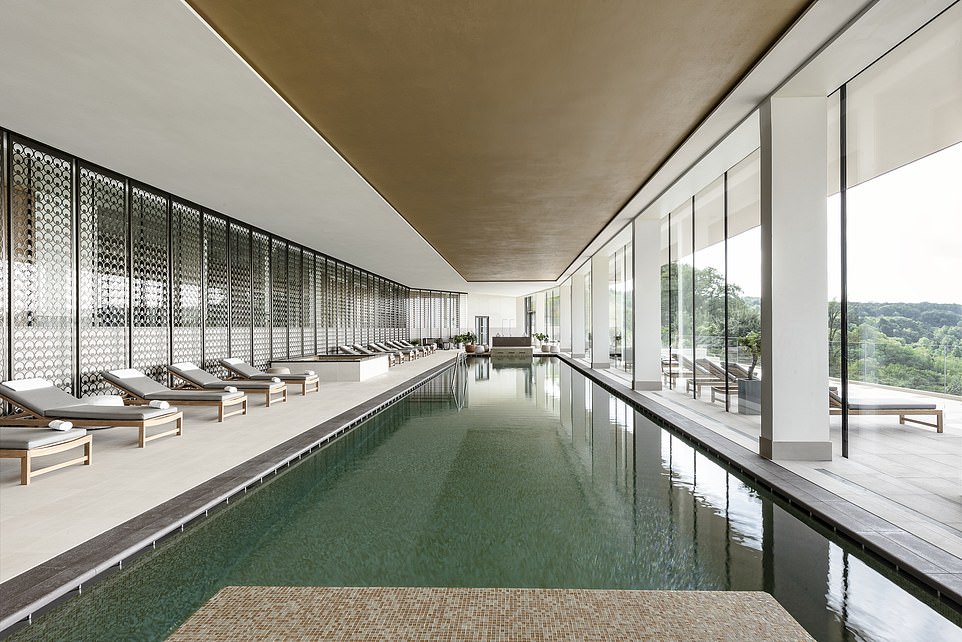 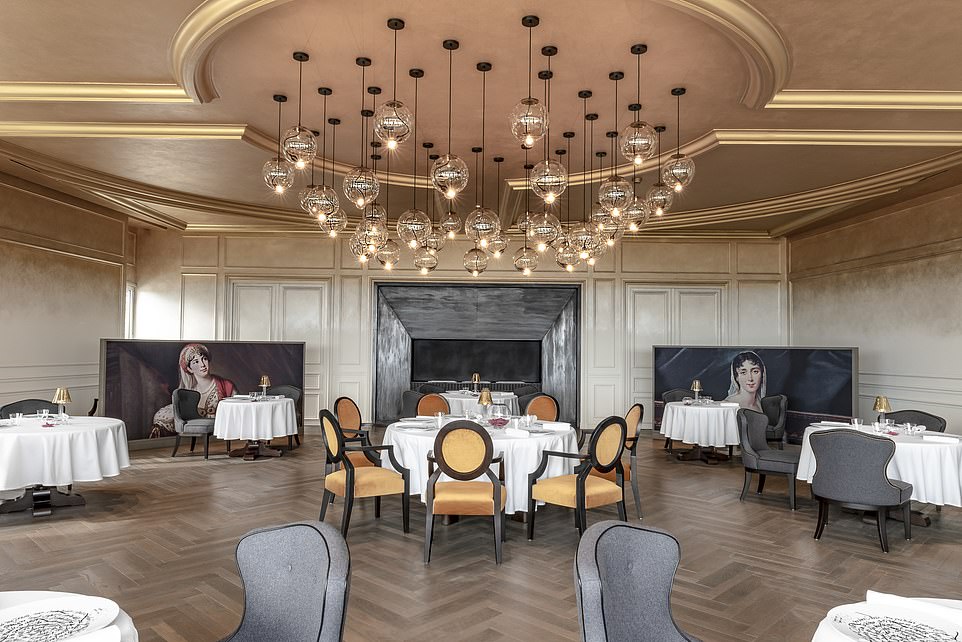 The one-Michelin-star restaurant at the Royal Champagne Hotel & Spa, which, needless to say, has a fine Champagne list

Its stunning setting, friendly staff and sumptuous design are reason enough for a visit to this region. This divine hotel has a charming equine motif throughout in tribute to its former incarnation as a coaching inn. Its 49 spacious rooms are beautifully designed, many with panoramic balconies.

The heavenly Spa here is overseen by Biologique Recherche-trained staff and has a stunning indoor and outdoor pool. Its restaurant, Le Royal, deservedly has a Michelin star and the dining room has a very French tribute to Napoleon with portraits of his wife and mistresses as a backdrop.

Needless to say, the restaurant has a fine Champagne list, which includes the vegan friendly Champagne Leclerc Briant. It happens to be owned by hoteliers Mark Nunnelly, a Boston-based financier, and his wife Denise Dupré. After breakfast, borrow one of the hotel’s electric bikes and take a scenic ride past the vineyards of Taittinger and Moët & Chandon and dismount at Champagne Mercier in nearby Epernay.

All aboard the Champagne train 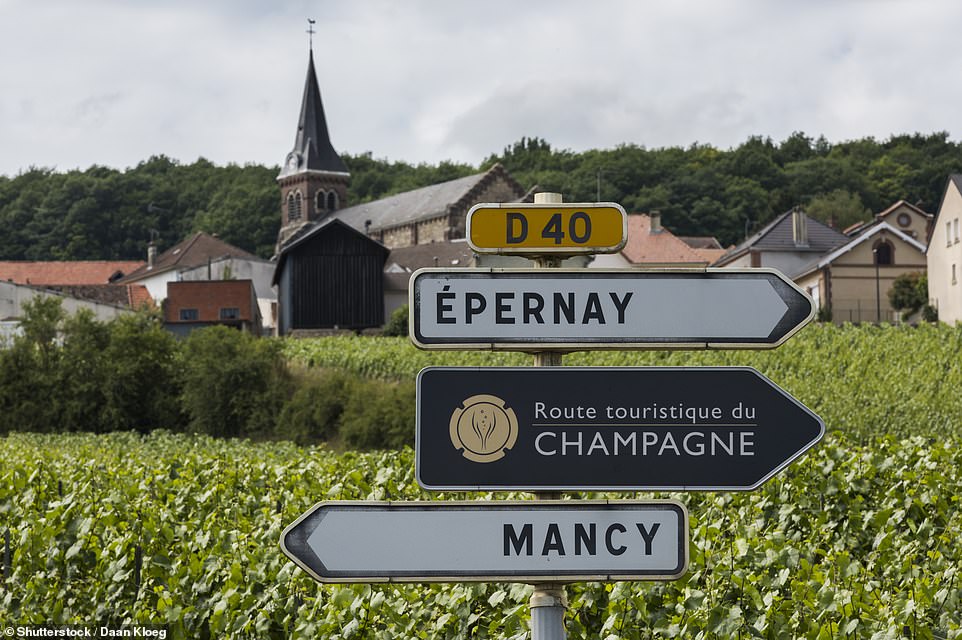 The most charming Champagne tour is Mercier where visitors are taken 30m down Epernay’s chalky soil in an interactive lift to discover its treasures. Once there all visitors board a dinky little train that travels across some of the 18kms (11 miles) of cellars, where millions of bottles are stored. In the time of Mr Mercier in the late 19th century, visitors, including then French President Carnot, toured the tunnels in carriages pulled by four horses. He created the world’s first Champagne commercial, directed by the famous Lumière Brothers.

Mercier was an incredible entrepreneur with an uncanny eye for turning disaster into a marketing opportunity. At the 1900 Paris Universal Exposition, Eugène Mercier created a floating Champagne bar in an anchored hot air balloon that took visitors to an altitude of 300m (984ft). Unfortunately it somehow got untethered taking the terrified passengers all the way to Belgium, where Mercier was promptly fined for illegally importing Champagne. The ensuing global publicity turned Mercier into a household name and helped achieve Mercier’s aim to create a Champagne for all occasions, not just for the elite.

La Cave a Champagne is the perfect place to enjoy champenoise cuisine – it is the busiest restaurant in the town, with friendly non-English-speaking staff, where local regulars will indulge in the likes of pig’s trotter and snail casserole, fillet of beef in pinot noir served paired with reasonably priced grower Champagne.

Other places to stay in Epernay are the luxurious but reasonably priced Les Suites du 33, situated on the Avenue de Champagne and housed in the outbuildings of the Hôtel Particulier de Venoge. It offers four deluxe rooms as well as a plush apartment – it is very convenient for a tour and tasting at Champagne De Venoge, a favourite of the rapper Usher. Another option close by is the three-star Hotel Le Clos Raymi, housed in a 19th-century house once owned by Monsieur Chandon. 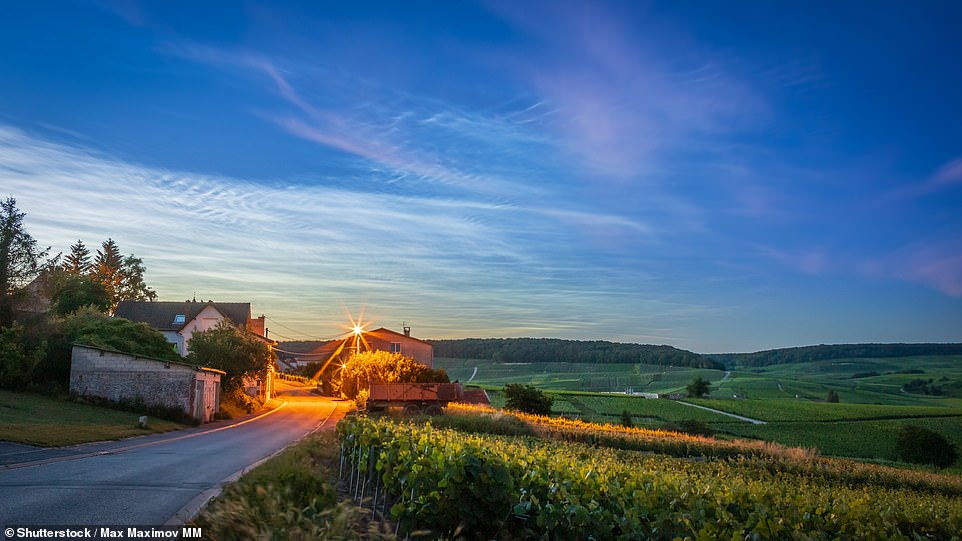 If you are with the kids, they will love a trip to the quirky Les Caves aux Coquillages (shellfish cellar) in the charming village of Fleury-La-Riviere, where Patrice Legrand of Champagne Legrand Latour has spent a lifetime collecting the fossils of millions-of-year-old sea life. Laurent is a Gallic Indiana Jones and if your French is good enough, his palaeontology class is highly recommended. Most of his stunning collection of fossils were discovered by him while digging out his cellars and tending his vineyard.

The chalky soil that makes it perfect for growing vines is derived from the sea life that has accumulated on the former ocean floor of this region over many millions of years. Patrice’s grower Champagne is lovely and if you drink too much, his guesthouse is a homely place to stay.

Shaken not stirred by James Bond 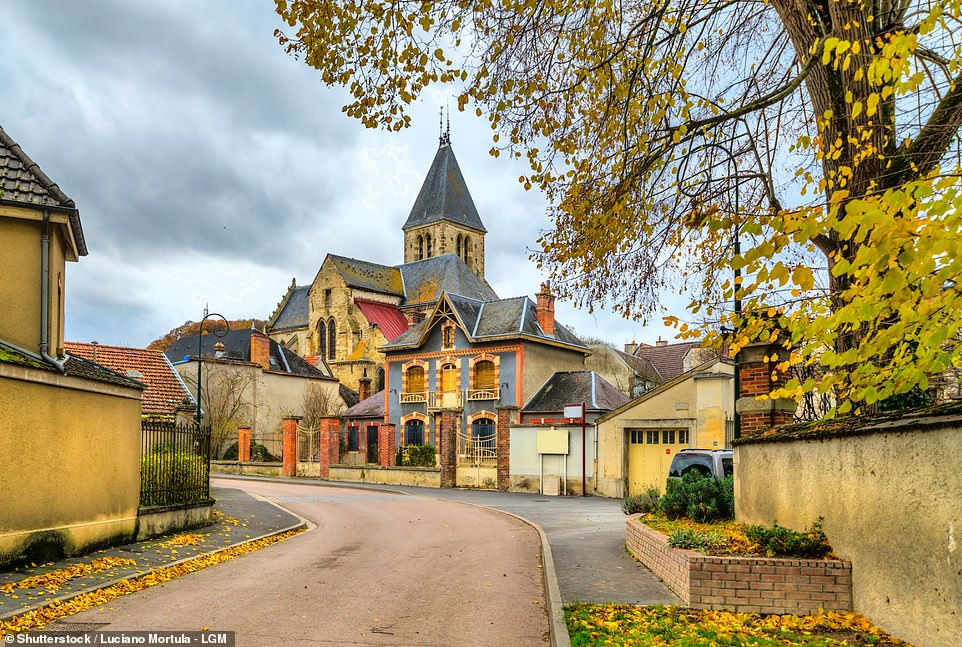 The village of Ay, pictured, is home of Champagne Bollinger, James Bond’s bubby of choice

The region is full of picturesque villages, including Dom Perignon’s fairy-tale hilltop village of Hautvillers. One of the prettiest is the Grand Cru village of Ay (pronounced Eye), the home of Champagne Bollinger, James Bond’s bubby of choice.

In fact, 007 has imbibed Bolly in 15 movies starting with Moonraker 40 years ago.

Domaine Henri Goutorbe, meanwhile, is a family owned grower Champagne with a lovely cellar and collection of artworks, including a valuable pair of Mucha glassworks. Rene and his wife Nicole own the reasonably priced Hotel Castel Jeanson down the road, which has an indoor swimming pool.

While she never made it to the Champagne region, Marilyn Monroe was reputed to have emptied 350 bottles to run a Champagne bath, no doubt enjoying the grape’s naturally occurring anti-oxidants.

Extravagant? Of course. But as Oscar Wilde said ‘only the unimaginative can fail to find a reason for drinking Champagne’.

Frank Mannion is a film producer and he is currently filming Sparkling: The Story of Champagne, to be released in cinemas in autumn 2020. 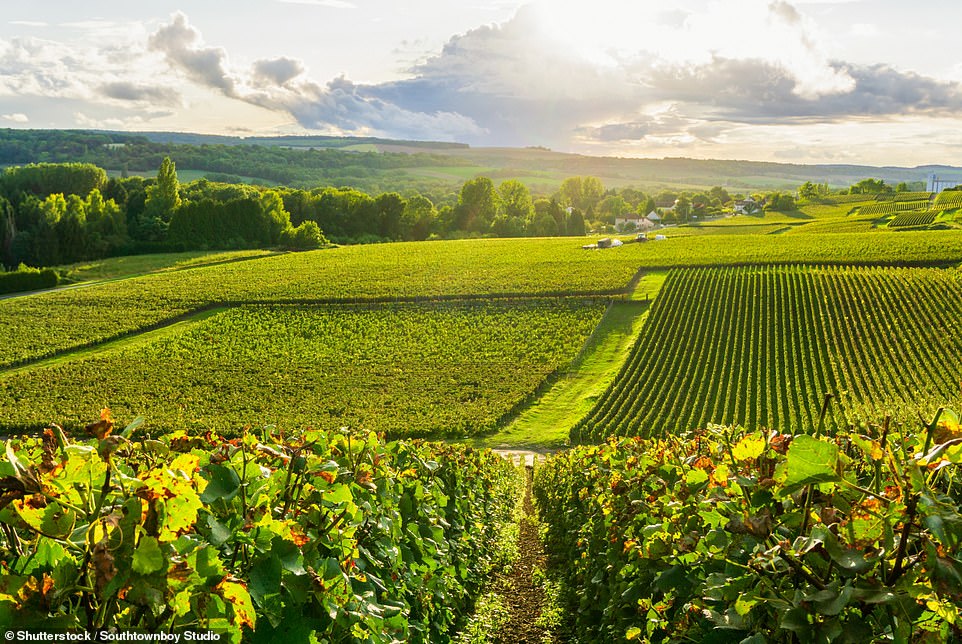 The Champagne region has had a bloody history, with its lands ravaged and vanquished by Atilla the Hun, the Vandals, the Goths and the Russians