‘I found it quite helpful’: Holly Willoughby admits she told her children to write letters to the Queen as a means of ‘processing their grief’ – as tearful presenter reads their ‘touching’ messages of condolences

Holly Willoughby has told how she was “really touched” by messages her children wrote to the Queen following her death and admits she urged them to write letters as a means of processing the news.

The presenter, 41, encouraged her three children with producer husband Dan Baldwin – Harry, 13, Belle, 11, and Chester, seven – to put down their feelings in writing after a visit to Buckingham Palace on the weekend to pay their respects.

Appearing on Monday’s edition of This Morning, she reflected on the impact of the Queen’s death with her co-host Phillip Schofield before reading their messages to viewers.

Reflection: Holly Willoughby has told how she used Her Majesty the Queen’s death on Thursday afternoon to explain ‘service and duty’ to her children

She said: ‘She was just consistently here for so many of us. So many of us never knew any different so suddenly for her not to be there…

‘I think that is why on Saturday I wanted to take the children down because I think you are trying to explain it to young people. You are almost trying to understand it yourself.

‘I found it quite helpful as, as I was talking to them, it was helping it sink in for myself.’ 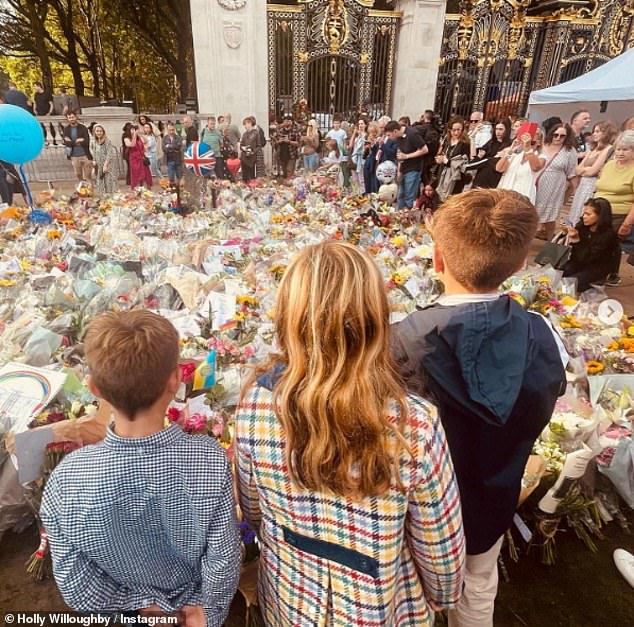 Respects: The presenter visited Buckingham Palace with her three children at the weekend, after which she encouraged them to put their feelings down on paper

Willoughby said she had urged her children to write to the Queen as a way of processing the news.

Speaking about how she had explained the ideas of service and duty to youngest child Chester, the presenter added: ‘I was trying to explain to him that whatever her passions and her loves (were) from being a little girl, this was where she was destined to go, what she was destined to do.

‘All of her own passions had to be put on the backburner for her country. Chester, he loves football but that would not be something he would get to do and it was giving him that level of understanding.’ 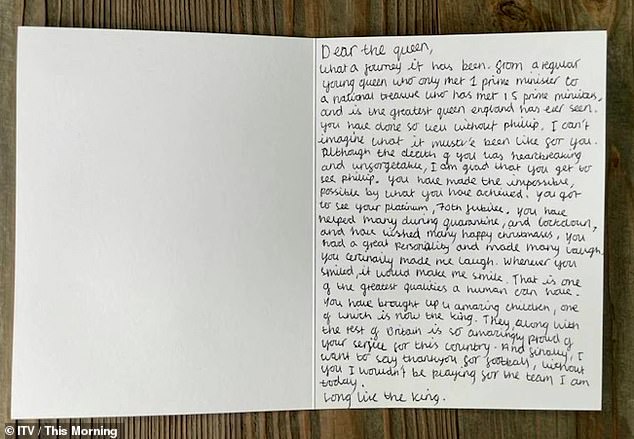 Therapeutic: Willoughby said she had urged her children to write to the Queen as a way of processing the news (pictured, one of the messages from her three children) 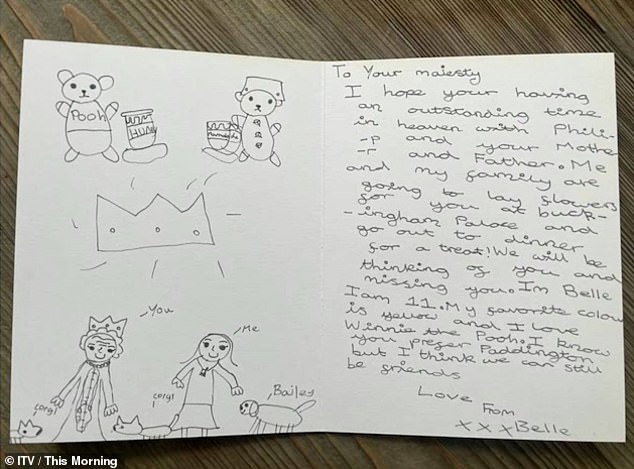 Moving: Willoughby said that reading them back after the visit had “really touched” her (pictured, daughter Belle’s letter to the Queen)

The presenter appeared to well up as she recalled their visit to the Palace over the weekend.

She said: ‘It was extraordinary to be there. The last time I was there was for the Jubilee. To be there three months later laying flowers in her memory, it just felt very very emotional.’

Retrieving her children’s letters, Willoughby said that reading them back after the visit had “really touched” her. 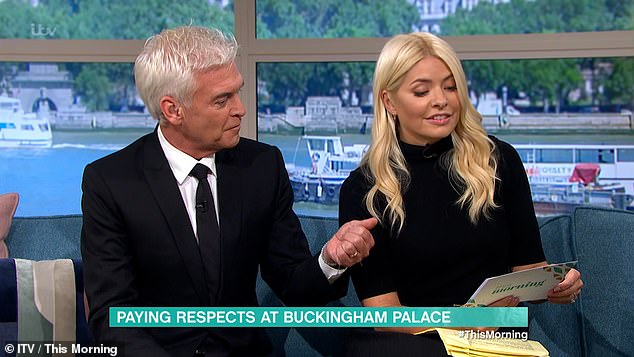 Tribute: Holly and co-host Phillip Schofield both wore black during Monday’s edition of This Morning, during which they discussed the Queen’s tragic passing last Thursday

In his letter, Harry described the late monarch as “the greatest queen England has ever seen” before adding: ‘You have done so well without Philip, I can’t imagine what it must have been like for you. I am glad you get to see him again.’

Belle, meanwhile, said she hoped the Queen was having “an outstanding time in heaven with Philip and your mother and father”.

Chester wrote only: ‘To your majesty, thank you for being our Queen. Lots of love. Chester.’

Both Willoughby and co-host Phillip Schofield wore funereal black as a mark of respect during Monday’s show while recalling their memories of the Queen.

Schofield said: ‘You’re always struck by her fabulous skin and sparkling eyes and very very sharp. On one occasion, after the royal wedding, the Palace was full of journalists.

‘I saw her and thought, there’s no one else but me and the Queen. I was referring to the journalists, and I said, I think there’s a lot of nervous people here. And she said, on who’s side?’