Holly Willoughby shared the first picture of herself on social media on Monday since fans called for her to be sacked over the ‘queue-gate’ scandal.

The TV presenter, 41, posted a snap of her bright pink outfit from the This Morning set and instantly received support from followers and the likes of Abbey Clancy and Kate Thornton.

It comes after allegations that Holly and her This Morning co-host Phillip Schofield, 60, ‘skipped the queue’ to see the Queen lying in state earlier this month, with the pair copping backlash from fans and even facing a petition calling for them to be axed.

She’s back! Holly Willoughby shared the first picture of herself on social media on Monday since the ‘queue-gate’ scandal which saw fans calling her to be sacked from This Morning

Holly looked gorgeous in a £140 bright pink jumper and a £240 flowing skirt from the brand Cefinn, which she teamed with tottering nude heels.

Her long hair was out and over her shoulders in tousled curls and she beamed in the snap.

‘Morning Monday… see you at 10am on This Morning. Today we’re joined by everyone’s favourite love story Harry Redknapp and his beautiful Sandra… Skirt and knitwear by Cefinn Studio,’ Holly captioned her post.

‘Morning Monday… see you at 10am on This Morning. Today we’re joined by everyone’s favourite love story Harry Redknapp and his beautiful Sandra…’ her post read 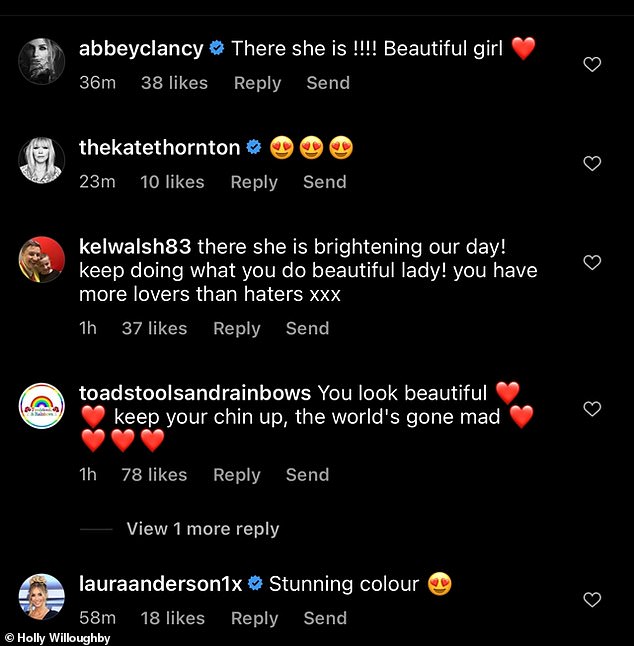 Underneath her post, WAG and model Abbey Clancy, 36, publicly voiced her support for Holly, writing: ‘There she is!!!! Beautiful girl.’ Kate Thornton and fans also chimed in

Underneath her post, WAG and model Abbey Clancy, 36, publicly voiced her support for Holly, writing: ‘There she is!!!! Beautiful girl.’

Another follower remarked: ‘You look beautiful. Keep your chin up, the world’s gone mad.’

On Thursday evening, Holly congratulate her friend and This Morning fashion presenter Lisa Snowdon for winning Celebrity MasterChef in an Instagram story. 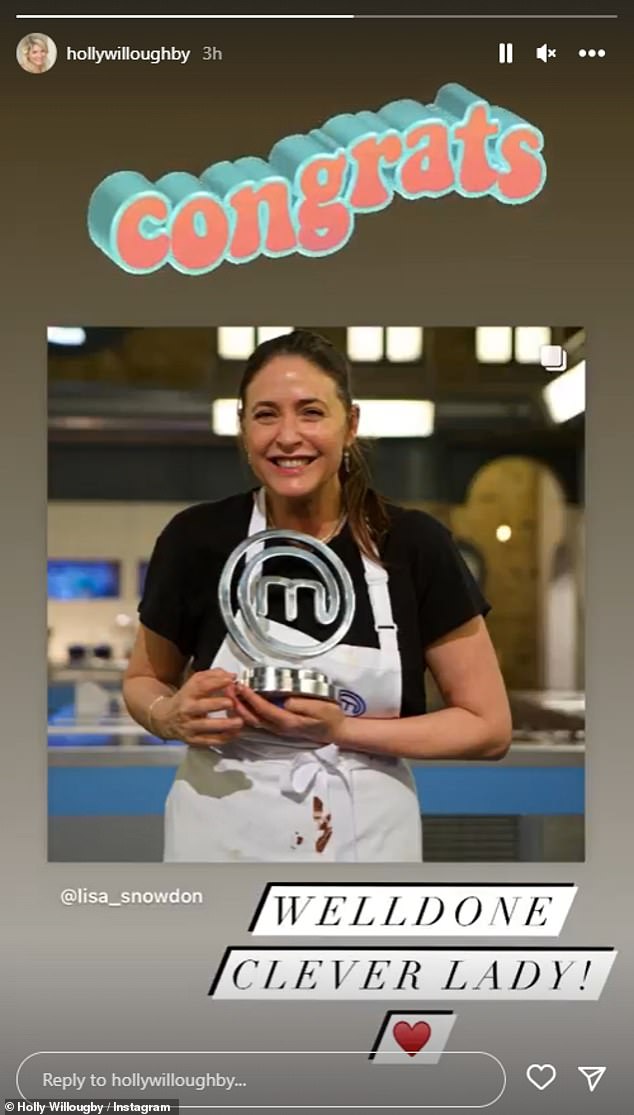 ‘Well done’: On Thursday, Holly did, however, return to social media for the first time since the scandal, but only to congratulate her friend and This Morning fashion presenter Lisa Snowdon

It comes following the uproar surrounding allegations she and Phil ‘skipped the queue’ to see the Queen lying in state earlier this month – claims they both strongly denied.

The pair have been the subject of online abuse in the wake of the claims and a petition to have the duo fired from their lucrative presenting roles hit more than 71,000 signatures in seven days.

The furore began on Friday September 16 when the presenters’ approach was contrasted with that of football legend David Beckham the same day.

The former England captain waited in line for almost 14 hours to pay his respects to the Queen – despite being offered a pass by an MP to jump the queue.

Good Morning presenter Susanna Reid also won plaudits for waiting for seven hours with her mother to file past the coffin. 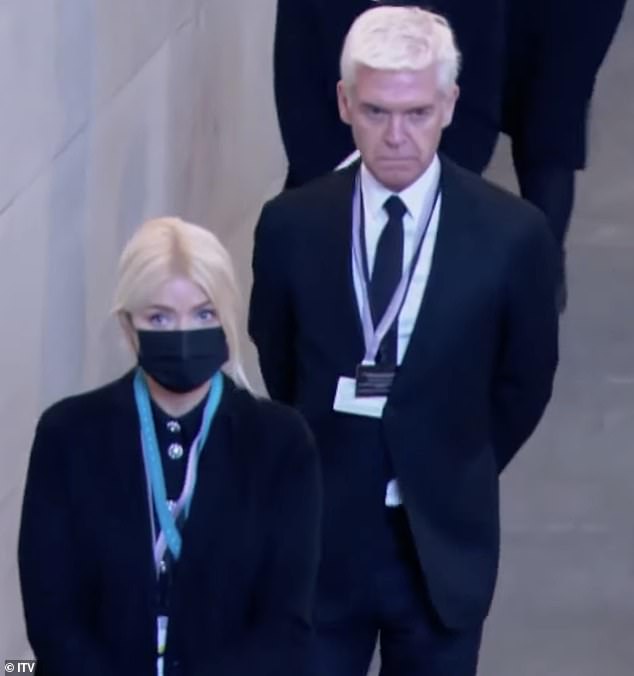 Uproar: It comes following the uproar surrounding allegations she and Phil ‘skipped the queue’ to see the Queen lying in state earlier this month – claims they both strongly denied

The week-long fallout over the incident – which has spawned hundreds of jokes online at their expense – has sparked rival briefing wars, with the presenters’ relationship now said to be under strain.

Holly is also believed to be unhappy that ITV did not step in sooner to back her, and there has been speculation – since denied – that she may leave the show.

After being seen on the official camera feed inside the venue, the pair said they were there to make a segment for This Morning’s show which would air four days later.

No TV crews other than the official feed were allowed inside. 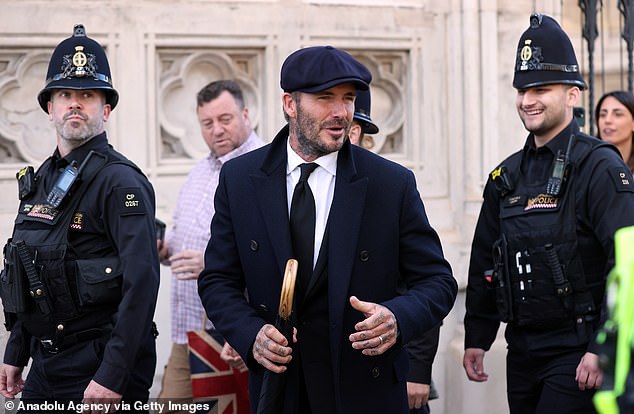 Controversy: The furore began on Friday September 16 when the presenters’ approach was contrasted with that of David Beckham, who waited 14 hours in line that same day

Holly and Phil have not commented on the matter since issuing a statement on Tuesday’s show in which they insisted they ‘did not skip the queue’.

ITV bosses are reportedly concerned Holly and Phil could be booed when they attend the National Television Awards next month following the backlash.

A source told The Sun: ‘They could be booed walking down the red carpet or even on stage. It’s a major concern.’

It comes as The Mail on Sunday revealed the star’s names were not even on the accreditation list when they made their controversial visit to see the Queen lying in state. 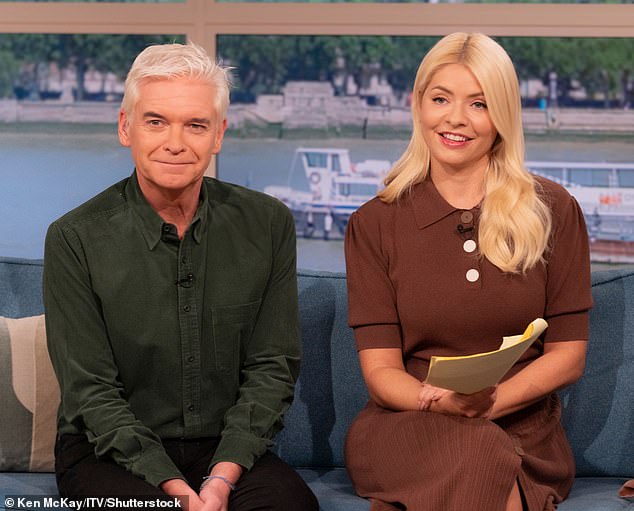 Concerns: ITV bosses are reportedly concerned Holly and Phil could be booed when they attend the National Television Awards next month following the backlash

The TV presenters created a ‘hoo-ha’ when they turned up ten days ago with two colleagues at Westminster Hall for what they say was to report for This Morning, said a source involved in processing the media list.

In what is the latest twist in an astonishing queue-jumping row, the names of their production team were instead used to help them gain access.

ITV insisted it would not give out the personal contact details of on-screen talent to the Palace of Westminster authorities – and so the email addresses of programme editor Martin Frizell and another member of the production staff, who accompanied them, had been used instead.

The source involved in the media list told The Mail on Sunday: ‘When they got there, their names weren’t on the list so there were some discussions and – after some back and forth – Phil and Holly were given access and they were ushered through. The whole thing caused a bit of a hoo-ha.’

Neither Frizell nor the other man accompanied the pair into Westminster Hall, where they stood in the press pen for 25 minutes. 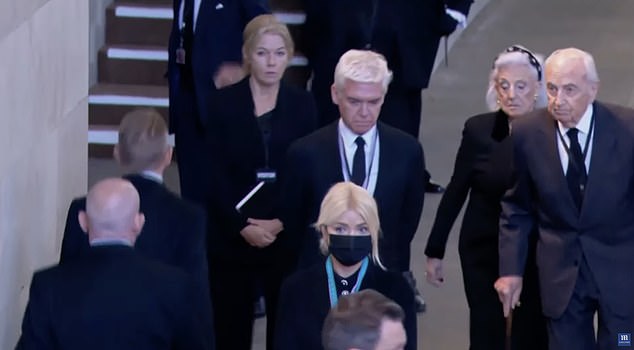 Claims: It comes as The Mail on Sunday revealed the star’s names were not even on the accreditation list when they made their controversial visit to see the Queen lying in state

Holly has been relying on support from her friends to get her through the past few days. And despite the fact that calls for Holly and Phil to be sacked could land Alison and Dermot the role as full-time hosts, sources say they have remained loyal.

Phil and Holly are reportedly paid as much as £600,000 for presenting the daytime show from Mondays to Thursdays, with Alison and Dermot filling in for Friday’s show.

Although neither ITV, Holly or Phil have said they will be changing the presenter line-up, that hasn’t stopped speculation brewing on who would take on the top spot if the duo were to leave This Morning.

According to William Hill, Vernon Kay and Rochelle Humes are the 2/1 favourites to replace the pair as lead presenter. Dermot is 4/1, the same price as Josie Gibson, with Alison, Craig Doyle, Ruth Langsford and Mollie King available at 5/1.

However, the speculation hasn’t caused any tension between the stars, with a source telling MailOnline: ‘Alison, Dermot, Phil and Holly are incredibly close and tight-knit.

‘When things started to blow up over the weekend they were in touch straight away to offer their support. Alison, in particular, has spoken many times with Holly over the phone and been a real rock.

‘Dermot and Alison, along with the rest of the senior members of the ITV team, all knew they were going to be visiting Westminster and there is a sense of shock and bewilderment at how things have blown up.’

This Morning insiders believe they are now ‘through the worst of the crisis’ but ITV bosses are still taking steps to make sure Phil and Holly get any support they need.

‘ITV has a duty of care to look after all of its presenters and some of the abuse that Phil and Holly have received on social media is absolutely horrendous,’ the source added.

‘People have gone way too far in some of the things they are saying and senior management have kept in regular touch with Phil and Holly to check they are OK. That will carry on until next week when they return to the programme.

‘Those working on the show hope, by then, things will have blown over and that they will be able to start to put this nightmare to bed. But only time will tell.’

Meanwhile, it recently emerged that Holly and Phillip were keen to issue a public apology over ‘queue-gate’, but were talked out of it after taking legal advice.

A statement was issued by ITV on Saturday and later broadcast on Tuesday’s This Morning, which was voiced over by Holly but both stopped short of using the word ‘sorry’ – a move which has left many viewers furious.

A source told MailOnline: ‘Every word of the statement was poured over. In the end, it’s spectacularly backfired.

‘Initially Holly and Phillip were prepared to say sorry if they’d upset anyone as they both just desperately want to draw a line under the affair. But they were advised strongly not to go down that road of saying sorry.’

Holly recently sparked worry amongst fans on Tuesday after they noticed she looked like she was ‘on the verge of tears’ and had ‘never been so quiet’.

A TV source said on Wednesday night: ‘The abuse has been nothing short of disgusting, not least as they have done nothing wrong and were fully entitled to media accreditation so they could inform their viewers.

‘There is huge, real and serious concerns over their wellbeing and ITV are fully supporting them behind the scenes in the face of such relentless trolling. The channel backs them 110 per cent.’