How Holly Willoughby is turning her husband into a TV mogul: ‘Queen of daytime’ on a mission to make Dan Baldwin’s firm a showbusiness powerhouse

She is one of Britain’s best-loved TV hosts, known to millions for her sunny demeanour and bubbly presenting style.

But behind the cameras, Holly Willoughby is also revealing herself to be a savvy businesswoman – by helping her husband become one of the most influential figures in the entertainment industry.

TV executive Dan Baldwin has built his production company into a creative powerhouse, helped in no small part by his wife, who appears increasingly willing to present her husband’s shows.

When the This Morning presenter recently announced she would be hosting Wim Hof’s Superstar Survival – Mr Baldwin’s latest series, which he has sold to the BBC – the 40-year-old failed to mention she had been signed up by her husband.

When Holly Willoughby announced she would be hosting Wim Hof’s Superstar Survival, she failed to mention she had been signed up by her husband Dan Baldwin (both pictured in 2009)

Hotly anticipated, the series will feature a group of ‘soul-searching celebrities’ who head to some of Europe’s harshest regions to take on death-defying challenges set by Mr Hof, a Dutch extreme athlete.

Ms Willoughby’s deal with the BBC has triggered fresh speculation about her relationship with ITV, which pays her £730,000 a year to host This Morning.

The ‘queen of daytime TV’, as she has been dubbed, is believed to have turned down offers to sign a ‘golden handcuffs’ deal with the BBC, but sources think her increasing involvement with her husband’s productions could see her cut down on her ITV commitments.

‘It is becoming very much a family business for the Baldwins,’ said one friend. ‘Dan has the ideas, creates the programmes and Holly presents them.

‘It is a winning formula and Dan’s power in the industry is getting more and more all the time.’

An industry insider said: ‘You can see what’s happening here. Holly is untying herself from everyone else in the industry and doing more and more with Dan.

‘I would be very surprised if she is hosting This Morning this time next year.’ 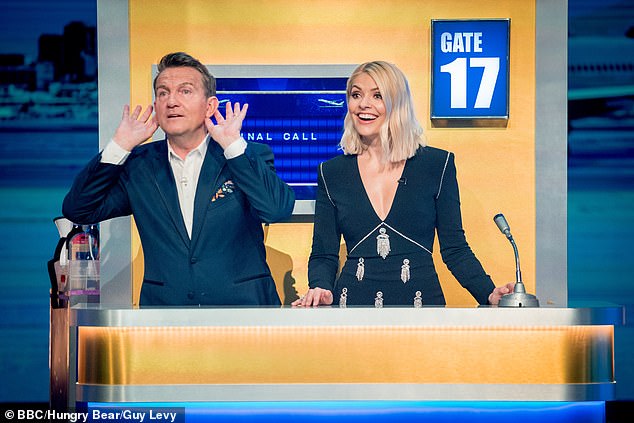 The 46-year-old TV producer was the brains behind Take Off With Bradley & Holly, a Saturday night Generation Game-type show on the BBC presented by his wife and Bradley Walsh

The 46-year-old TV producer was the brains behind Take Off With Bradley & Holly, a Saturday night Generation Game-type show on the BBC presented by his wife and Bradley Walsh.

On it, contestants compete to win seats on a plane to a dream holiday destination.

Ms Willoughby’s reputation has helped raise the profile of her husband’s work on other occasions, including regular appearances on Michael McIntyre’s primetime Saturday night shows, which are produced by Mr Baldwin.

Three years ago she appeared on the Send To All segment of Michael McIntyre’s Big Show, in which the comedian calls numbers from celebrity’s phones and last year’s The Wheel Christmas Special.

She has also featured on All Round To Mrs Brown’s, a spin-off of Mrs Brown’s Boys, and until last year captained a team on Celebrity Juice – both of which were produced by Mr Baldwin’s firm.

Despite being extremely well connected in the TV industry, Mr Baldwin prefers to ‘lie low’ out of the spotlight, according to a friend.

Other friends say he would rather watch his beloved Arsenal with sons Harry, 11, and Chester, six, than dine at fashionable restaurants.

‘He’s got his own production company, which is hugely successful,’ she once told a magazine. ‘We’re very lucky, that’s for sure.’

The couple met in 2004 while working on the children’s TV show Ministry Of Mayhem, which Ms Willoughby hosted and Mr Baldwin produced – but kept their romance secret for eight months.