It’s the go-to dating app for many people looking for love, and now Hinge has introduced a new feature called ‘Relationship Type.’

The tool allows users to specify the type of commitment they’re looking for, whether it’s monogamous or polyamorous.

Michelle Parsons, Chief Product Officer at Hinge, said: ‘With the launch of Relationship Type, we are empowering users to openly share what kind of relationship they are looking for, and as a result, have a new way to know if someone’s dating goals match theirs from the moment they look at their profile.’

It’s the go-to dating app for many people looking for love, and now Hinge has introduced a new feature called ‘Relationship Type’ 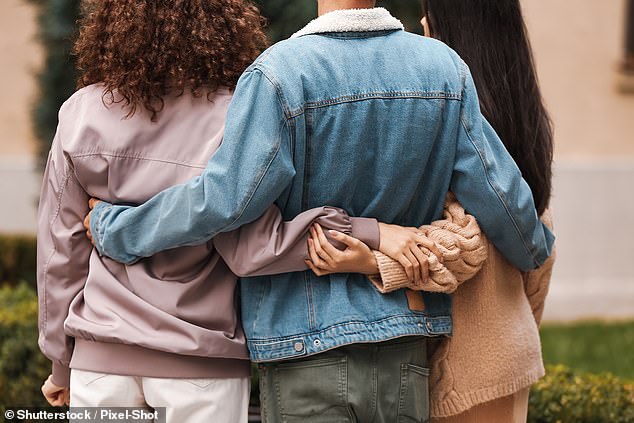 The tool allows users to specify the type of commitment they’re looking for, whether it’s monogamous or polyamorous

How to improve your dating profile

Most singletons want monogamous relationships, in which they only have one partner.

However, research has shown that about five per cent of relationships are openly non-monogamous, or polyamorous.

Polyamory means ‘many loves’, and refers to people who have multiple romantic relationships at the same time.

Sexual health and wellbeing charity, Brook, explains on its website: ‘There are no one-size-fits-all rules for doing relationships. It’s about finding out what works for you.

‘For some people this means being monogamous – having only one partner.

‘For others it means being non-monogamous, which means having more than one partner, or having one partner but having sex with other people as well.’

Amid this rise in non-monogamous relationships, Hinge has launched a new option within the ‘Virtues’ section of the app.

Users will be able to specify whether they’re looking for monogamy, non-monogamy, or are still working out their relationship type.

There’s also the option to add a ‘backstory’ with further details.

Hinge hopes the tool will provide singletons with an easy way to be clear about the type of relationship they’re looking for from the offset.

Ms Parsons said: ‘Hinge is the place for all daters to find intentional and meaningful romantic connections, and I want it to enter a new era of dating where the word “relationship” defies traditional and heteronormative meaning.’

Hinge first launched back in 2012 and describes itself as the ‘dating app designed to be deleted’.

‘Hinge is built on the belief that anyone looking for love should be able to find it. We were born from a desire to fundamentally change how dating apps work in our culture today,’ it explains.

‘We saw a world where many users were burnt out by the speed of most dating apps. They were spending hours on their phones and had little to show for it.

‘People were so busy matching that they weren’t actually connecting, in person, where it counts.

‘That’s why we built an app that’s designed to be deleted: purpose-built to get people off their phones and out on dates.’

HOW DID ONLINE DATING BECOME SO POPULAR?

The first ever incarnation of a dating app can be traced back to 1995 when Match.com was first launched.

The website allowed single people to upload a profile, a picture and chat to people online.

The app was intended to allow people looking for long-term relationships to meet.

eHarmony was developed in 2000 and two years later Ashley Madison, a site dedicated to infidelity and cheating, was first launched.

In 2012, Tinder was launched and was the first ‘swipe’ based dating platform.

After its initial launch it’s usage snowballed and by March 2014 there were one billion matches a day, worldwide.

In 2014, co-founder of Tinder, Whitney Wolfe Herd launched Bumble, a dating app that empowered women by only allowing females to send the first message.

The popularity of mobile dating apps such as Tinder, Badoo and more recently Bumble is attributable to a growing amount of younger users with a busy schedule.

In the 1990s, there was a stigma attached to online dating as it was considered a last-ditch and desperate attempt to find love.

This belief has dissipated and now around one third of marriages are between couples who met online.

A survey from 2014 found that 84 per cent of dating app users were using online dating services to look for a romantic relationship.

Twenty-four per cent stated that that they used online dating apps explicitly for sexual encounters.