Hilary Duff celebrated Independence Day with a bang as she headed to the beach in a sexy lilac bikini.

The former Lizzie McGuire actress, 34, put her incredible physique on display as she played around the ocean with her daughter Mae, one, and son Luca, 10.

Whether she was splashing around in the waves with her youngest child or paddling about the ocean blue with Luca, Hilary was having the time of her life celebrating the Fourth of July in Malibu.

Happy 4th of July! Hilary Duff celebrated Independence Day with a bang as she headed to the beaches of Malibu h in a sexy lilac bikini

She also was a vision of beach style with a beige bucket hat tossed over her long, mermaid-esque blonde waves and a pair of sunnies shielding her hazel eyes.

The How I Met Your Father actress glammed it up with an array of pendant necklaces.

Hilary carried her daughter Mae against her hip and eventually ventured into the water with her little girl in her arms.

She joyfully raised her child into the air as she stood in the tranquil waters.

Making a splash! The former Lizzie McGuire actress, 34, put her incredible physique on display as she played around the ocean with her daughter Mae, one, and son Luca, 10 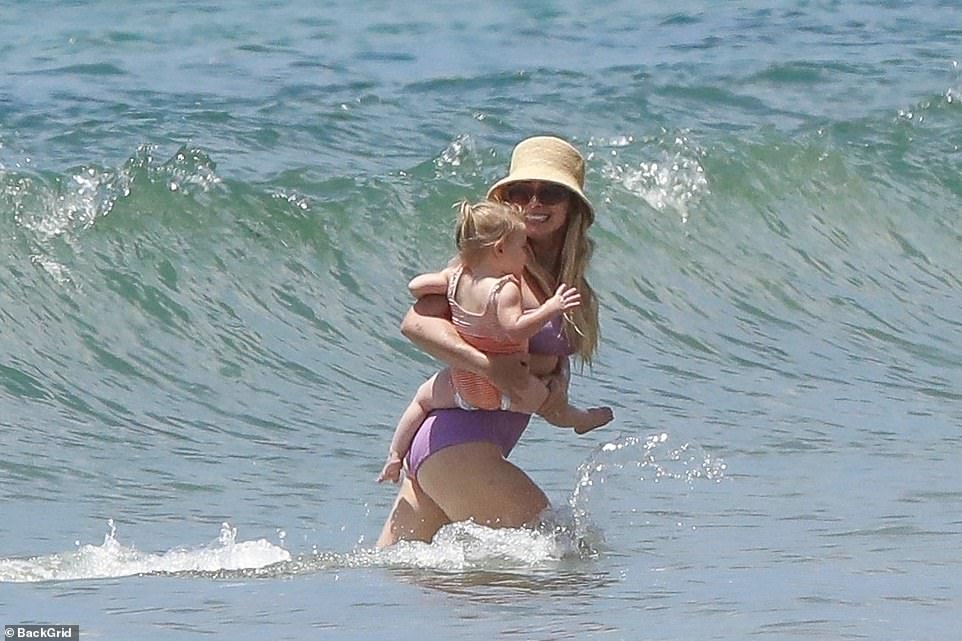 Doting mom! Duff headed to the water with her little one in her arm 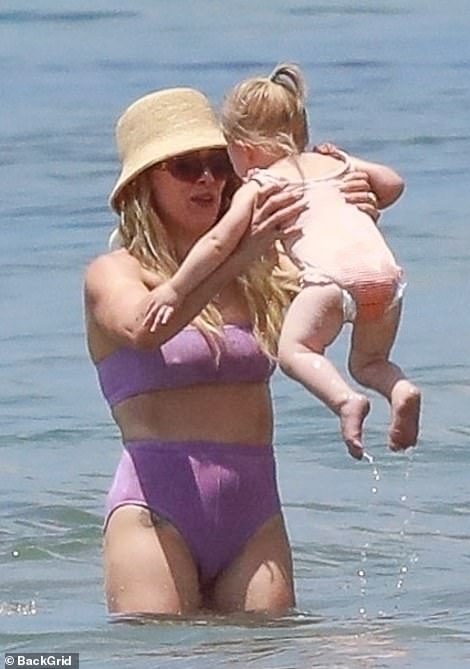 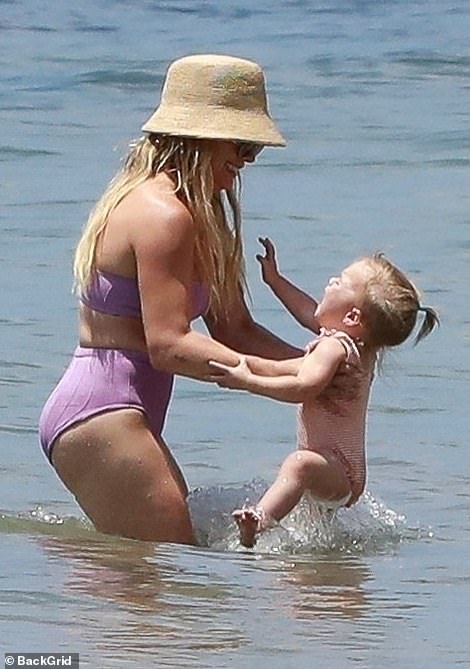 Up you go! The actress gleefully held her daughter up as she stood in the tranquil waters

Eventually, she headed to the water with her son Luca.

The actress grinned with glee as they shared a board and paddled their way across the water.

Hilary assumed control of the paddle as her son sat behind her and admired their idyllic surroundings.

Pretty in purple! Duff wowed in a lilac bikini which accentuated her stunning body 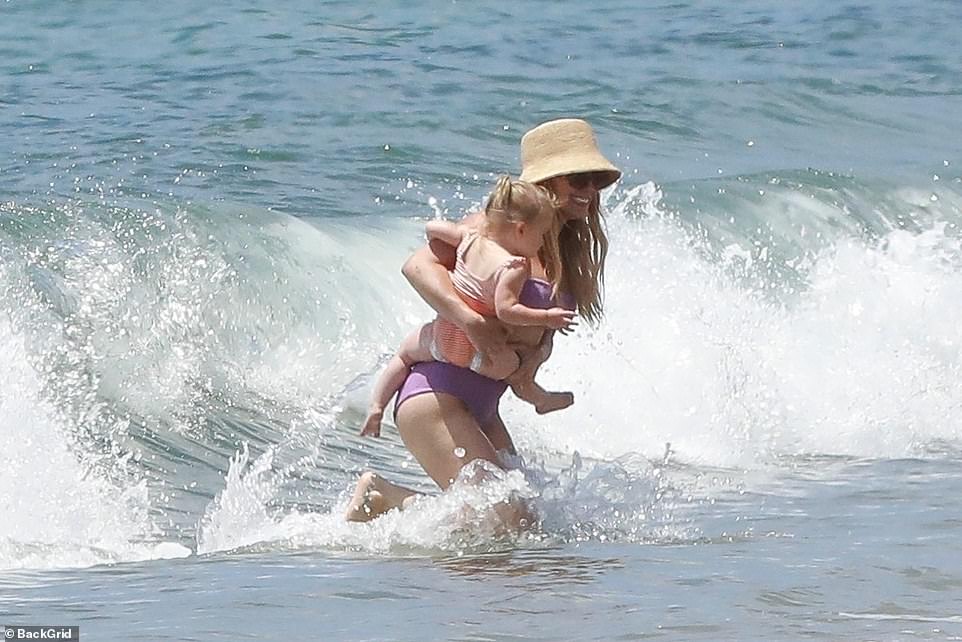 Fun in the sun! Duff beamed as she dashed ahead of the crashing waves 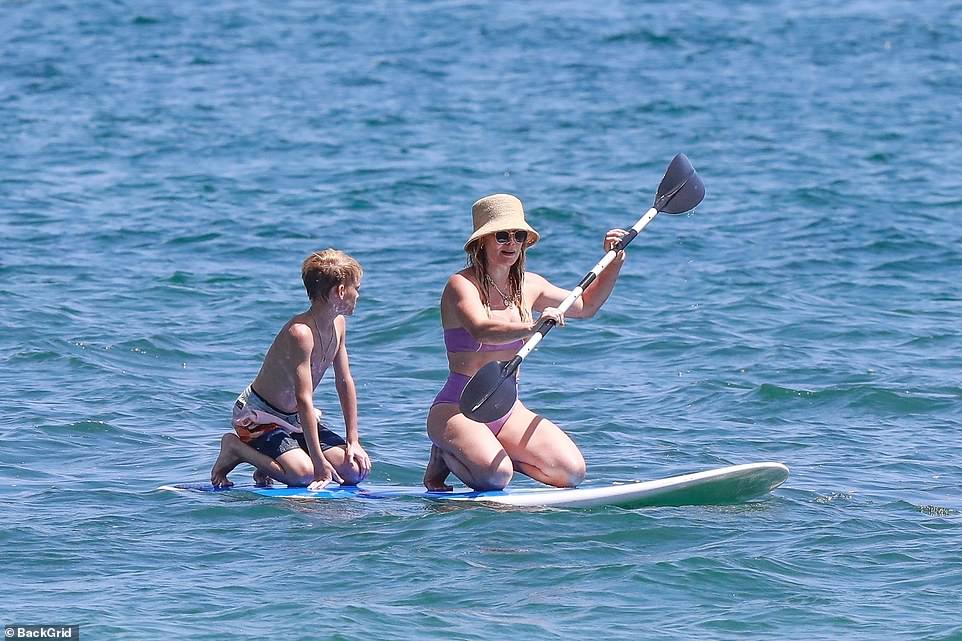 Making waves! Duff paddled across the ocean blue with her son Luca 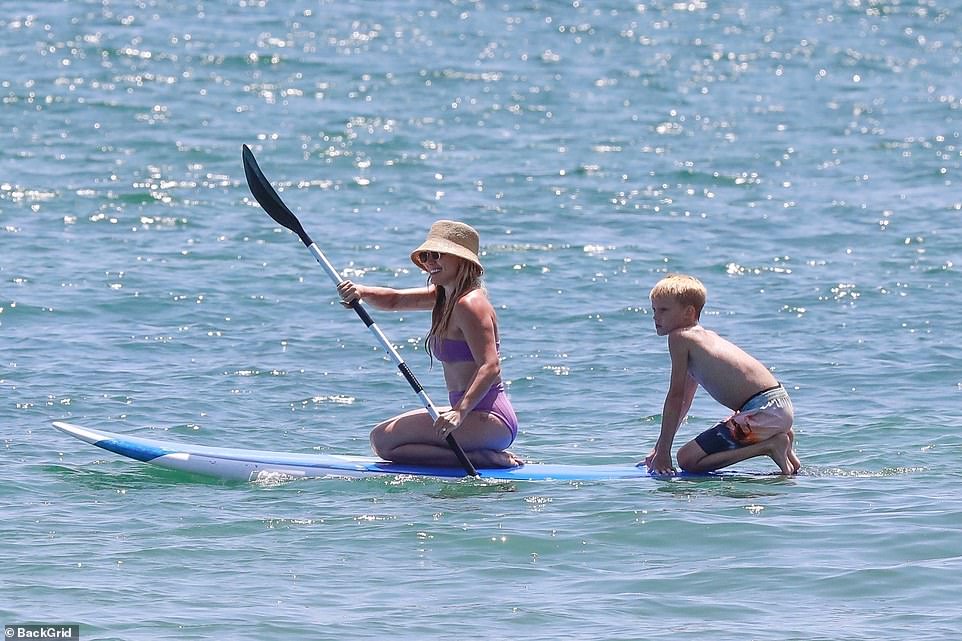 Surf’s up! Luca sat at the end of the board as his mother paddled ahead 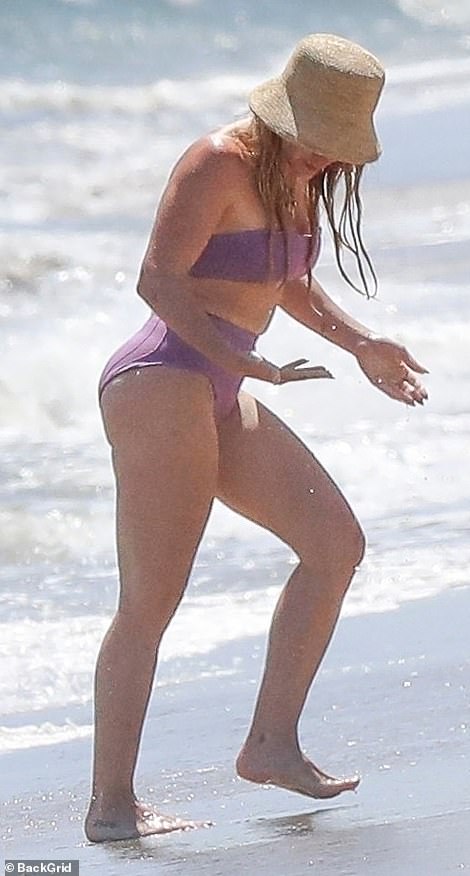 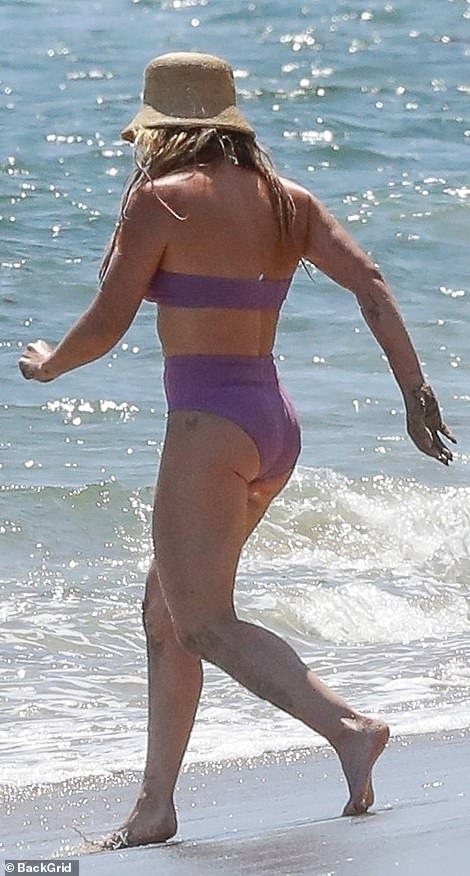 Beach babe! Heads turned as Hilary hit the beach with her svelte physique on full display 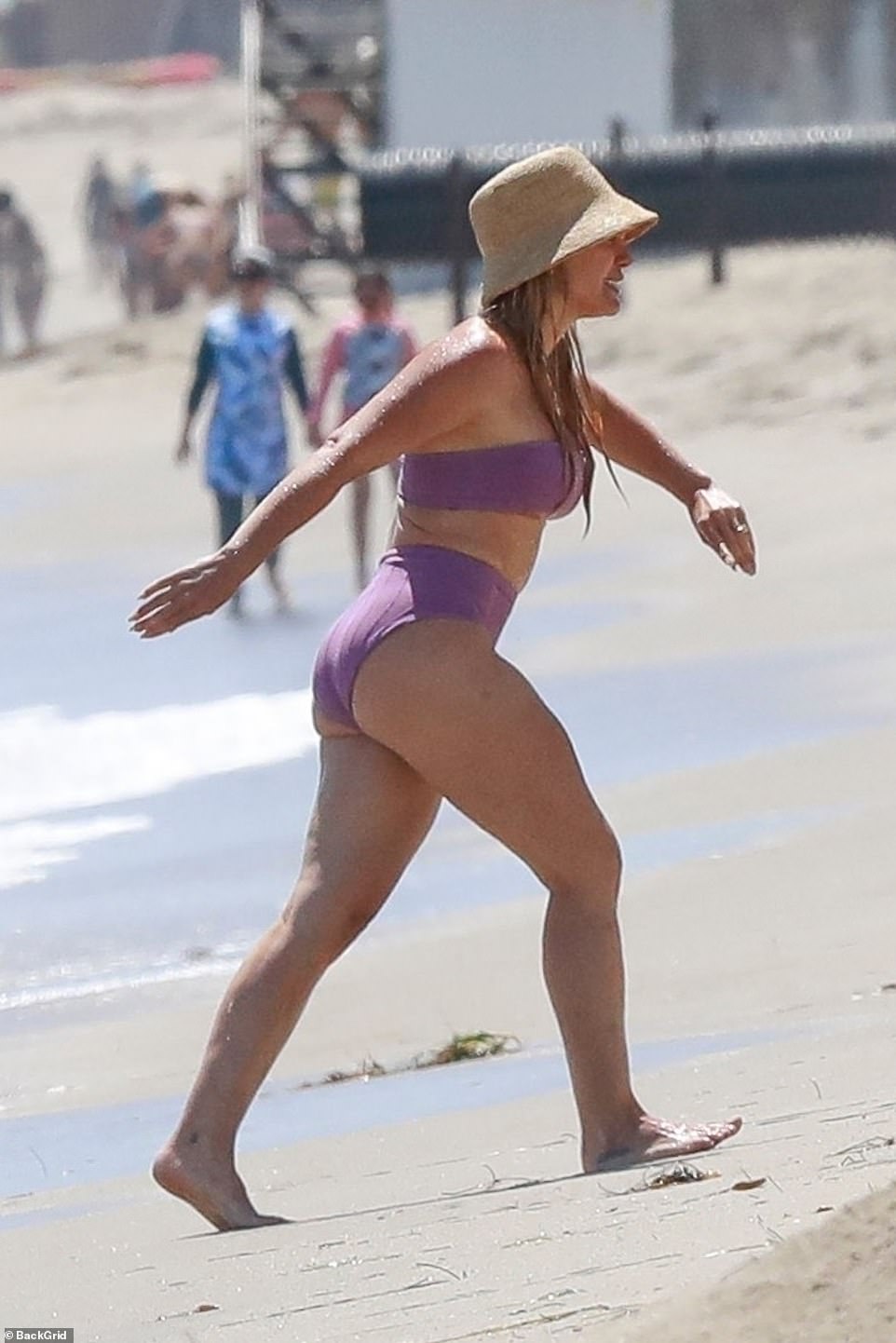 Vitamin sea! The actress celebrated Independence Day with a revitalizing day at the ocean

The actress tied the knot with the singer in 2019 and last month paid a gushing tribute to him in honor of Father’s Day.

‘Thanks for also making me a girl mom @matthewkoma you are the most supportive/understanding/funny/willing/kind/ father and bonus dad there is. There’s no way in hell I could do this without you,’ she posted to Instagram.

‘I love the way you look at our kids in amazement with every little or big thing they do, I love how you pedal as fast as you can to make it home by 6 every night, I love how you wouldn’t change some of our toughest days with these creatures. You grocery shop like the best wife…you pack a mean lunch .. you do a great top knot …. You can still keep up with Luca in soccer … you are a GREAT assistant when the kids put you in the corner and just want me. 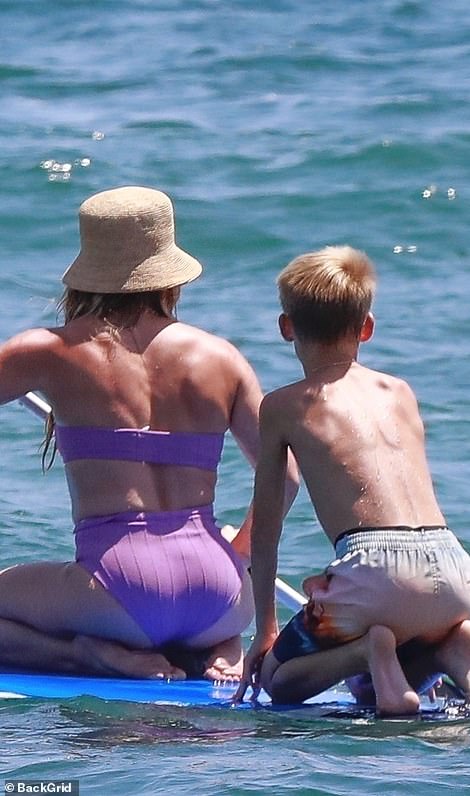 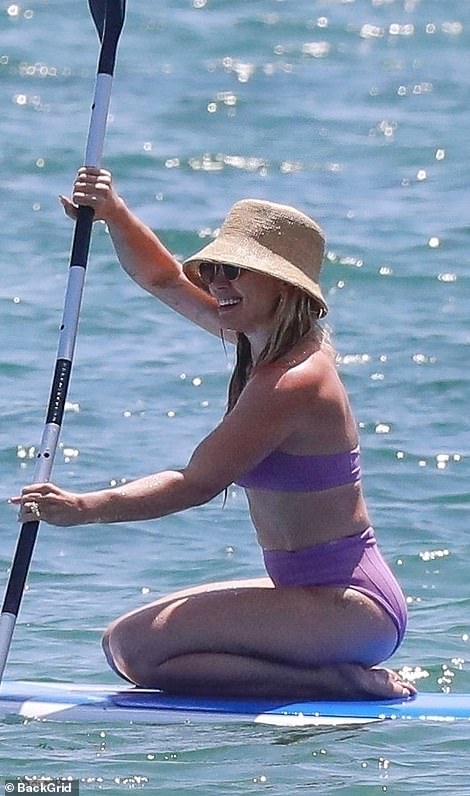 Family fun! The star beamed with joy as she enjoyed a day out in the water with her son 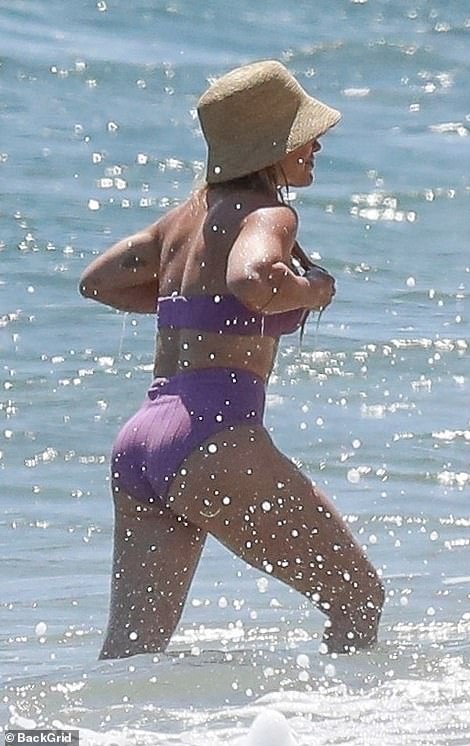 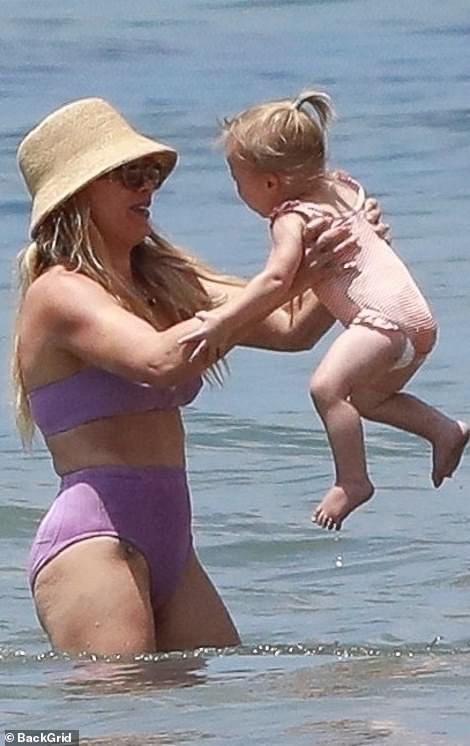 Mum’s the word: The actress shares daughters Mae and Banks with her husband Matthew Koma and son Luca with her ex-husband Mike Comrie 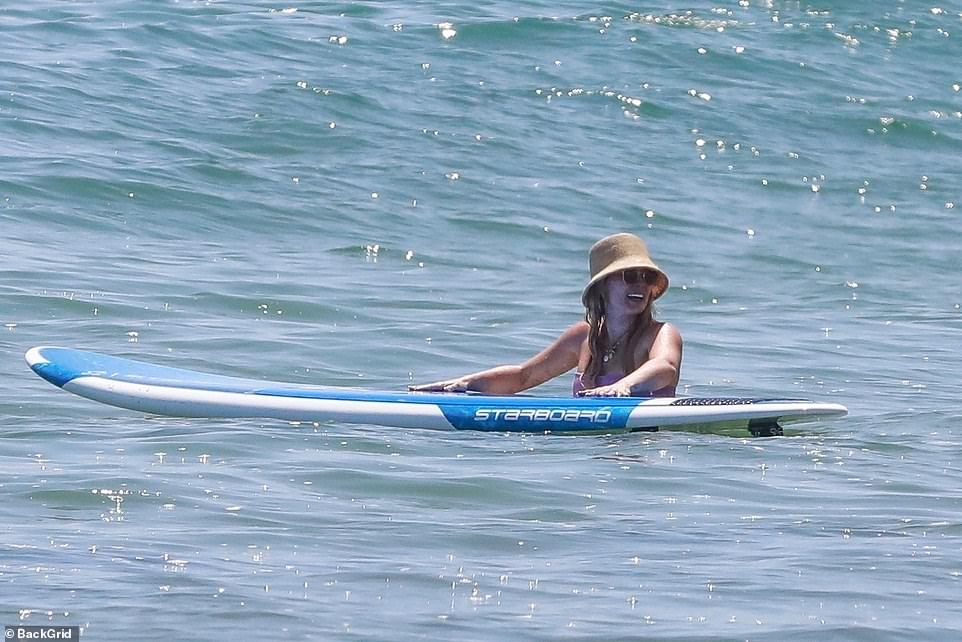 Hang ten! She cooled down in the water by her board

‘The fact that you hopped out of a car that was in bumper to bumper and ran a mile and a half up hill through traffic at JFK to make a flight last night after playing a show in Philly , sums up what you do for us.

‘You’re never not trying. I have so much peace knowing we are and always will be top of mind for you. Thank you for being the calm, sensitive one. Thank you for all of your love and weirdness. You do it for me babe #HotDadFathersDay mmmm mmm mmm (heart emoticon) in ten years on this day we sleep….. as much as we want.’

In May, Hilary raised some eyebrows and opened some hearts when she posed nude for the cover of Women’s Health.

The star, who confessed to suffering from a ‘horrifying’ year long eating disorder when she was 17, said she decided to make the bold move because, ‘I’m proud of my body. I’m proud that it’s produced three children for me.. I’ve gotten to a place of being peaceful with the changes my body has gone through.’

Hilary wanted to make sure her fans knew she didn’t achieve the look on the magazine cover without some help.

‘I also want people to know a makeup artist was there putting glow all over my body and someone put me in the most flattering position.’ 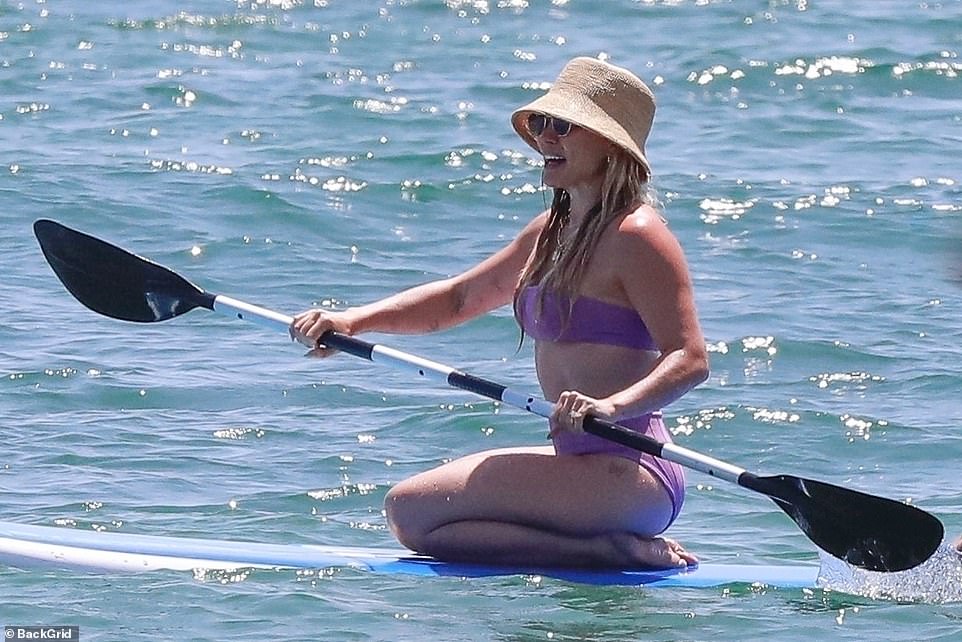 Looking like a pro! Duff confidently paddled her way through the sea 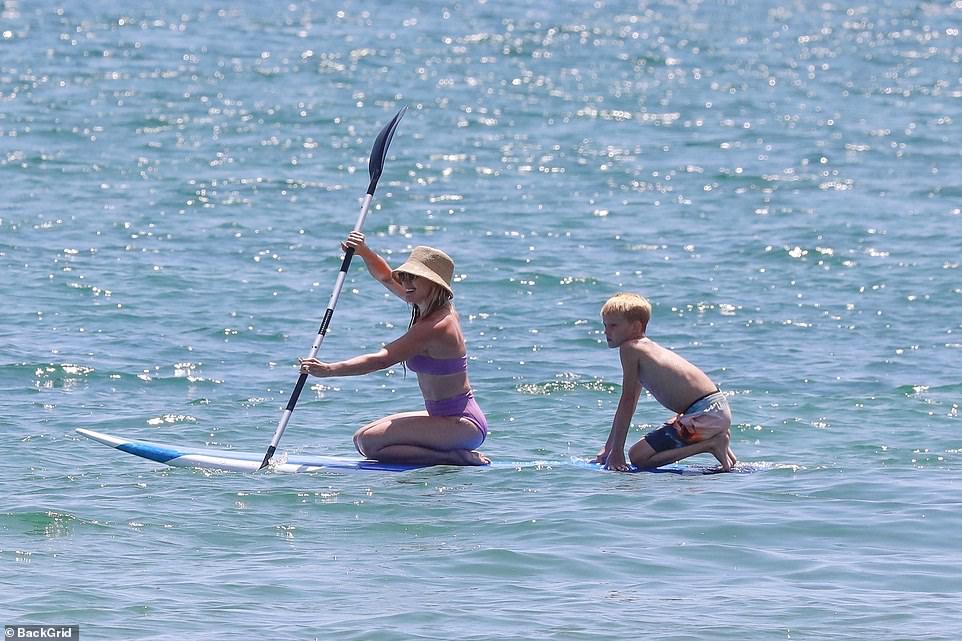 Life is good! The Come Clean singer couldn’t have looked any happier spending quality time with her family 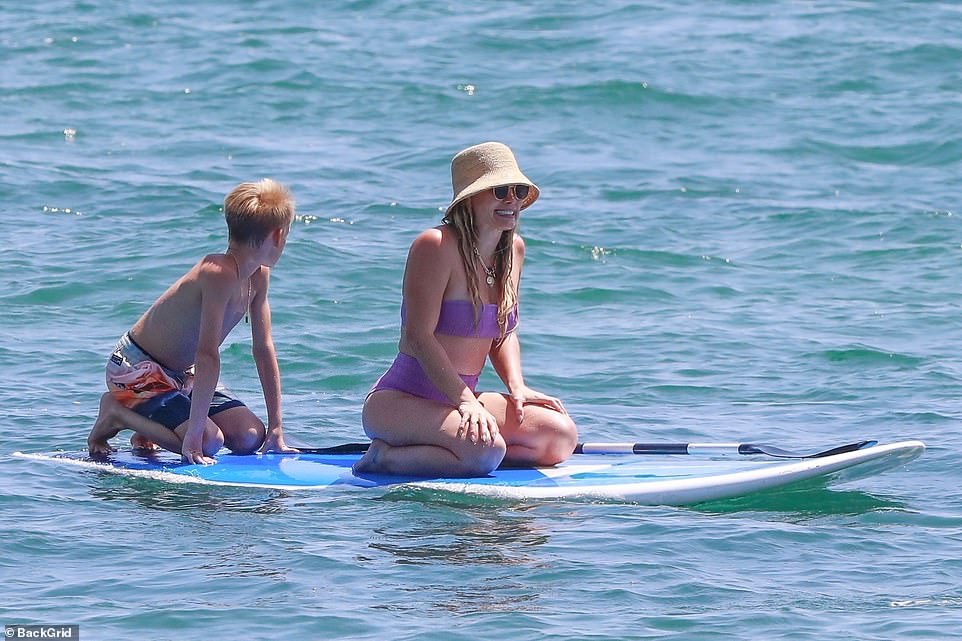 Matters of the heart: The actress tied the knot with Koma in 2019 and last month paid a gushing tribute to him in honor of Father’s Day