The Duke and Duchess of Cambridge will tomorrow celebrate a decade since they walked down the hallowed aisle of Westminster Abbey, where they said ‘I do’ in front of 2,000 guests, as the rest of the world looked on.

The idea of thousands of people lining the streets of the Mall to watch Prince William, 38, drive his bride out of Buckingham Palace on the evening of April 29th 2011 seems all the sweeter in a world where social distancing has become the norm.

The ceremony, performed by the then Archbishop of Canterbury, Dr Rowan Williams, was watched by 36.7 million people worldwide as Kate Middleton, then 29, wore a £250,000 gown by Alexander McQueen, which included a lace bodice hand-stitched by the world’s best seamstresses at the Royal School of Needlework.

The most iconic moment of the couple’s wedding day came perhaps when they shared their first kiss as a married couple on the balcony of Buckingham Palace, much to the delight of cheering onlookers outside the Palace gates.

Fairytale: A decade on from Prince William and Kate Middleton’s big day on April 29th 2011, the couple look back on a day that wouldn’t have been allowed to happen under current restrictions. Kate, then 29, wore a £250,000 gown by Alexander McQueen 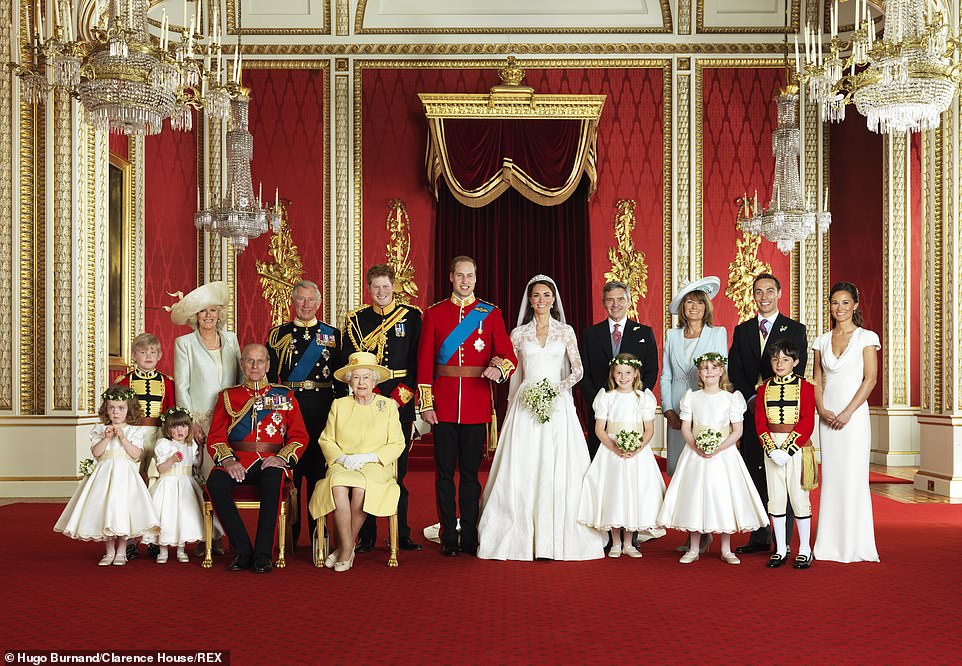 More poignant since the loss of Prince Philip: the couple’s wedding photo, with both sides of their families present, taken by Hugo Burnand in the throne room at Buckingham Palace 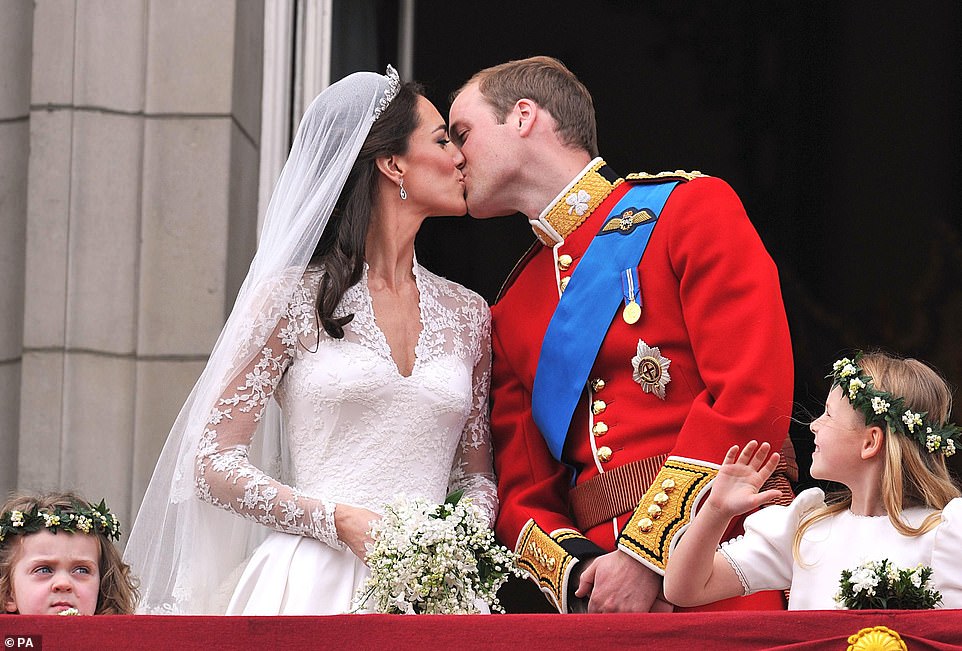 That kiss! Prince William and Kate Middleton shared a very public kissing on the balcony of Buckingham Palace following their wedding at Westminster Abbey

Moments earlier, stepping on to the balcony, Kate had appeared to gasp ‘Oh my’ as she caught sight of the thousands of people who’d streamed into the public spaces around Buckingham Palace to share in the joy of the newlyweds.

The sight of the Duke of Cambridge’s then three-year-old goddaughter Grace Van Cutsem clapping her hands over her ears to escape the noise of the clapping and cheering outside Buckingham Palace saw her win column inches galore in global newspapers.

Six children were lucky enough to be picked to be bridesmaids and pageboys, and they were largely the epitome of good behaviour – until the big kiss on the balcony, at least.

Grace – who is the daughter of the couple’s friend Hugh van Cutsem – is now 13 and has remained out of the public eye since stealing the limelight almost ten years ago. 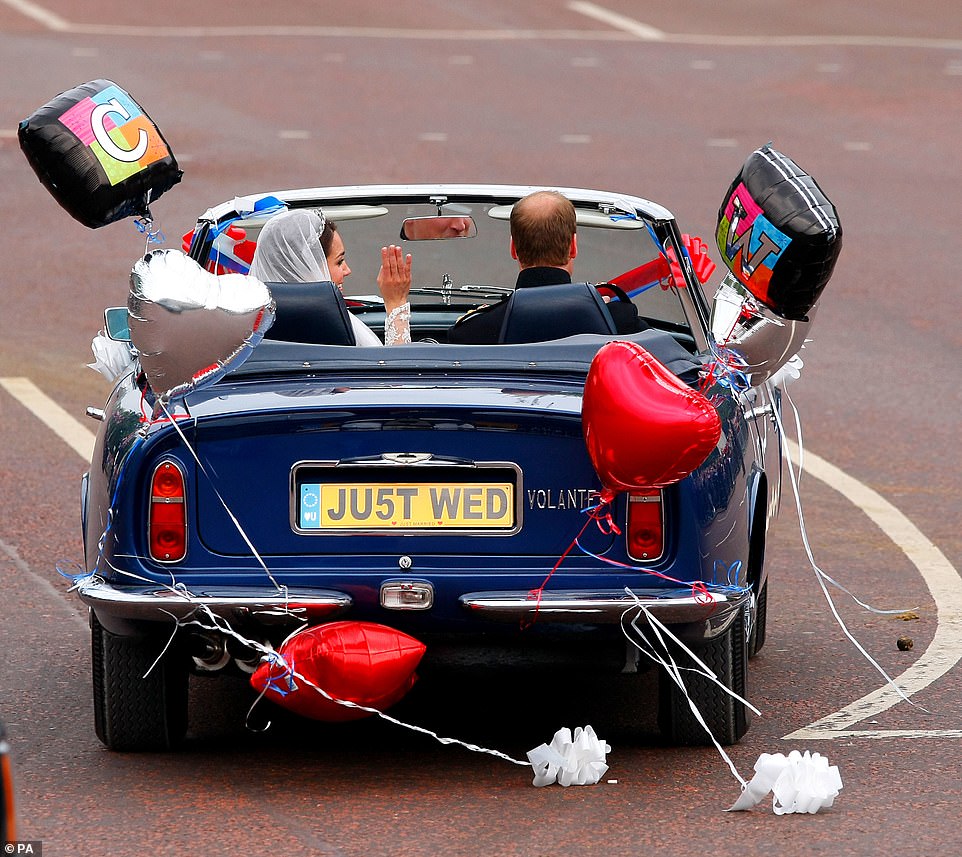 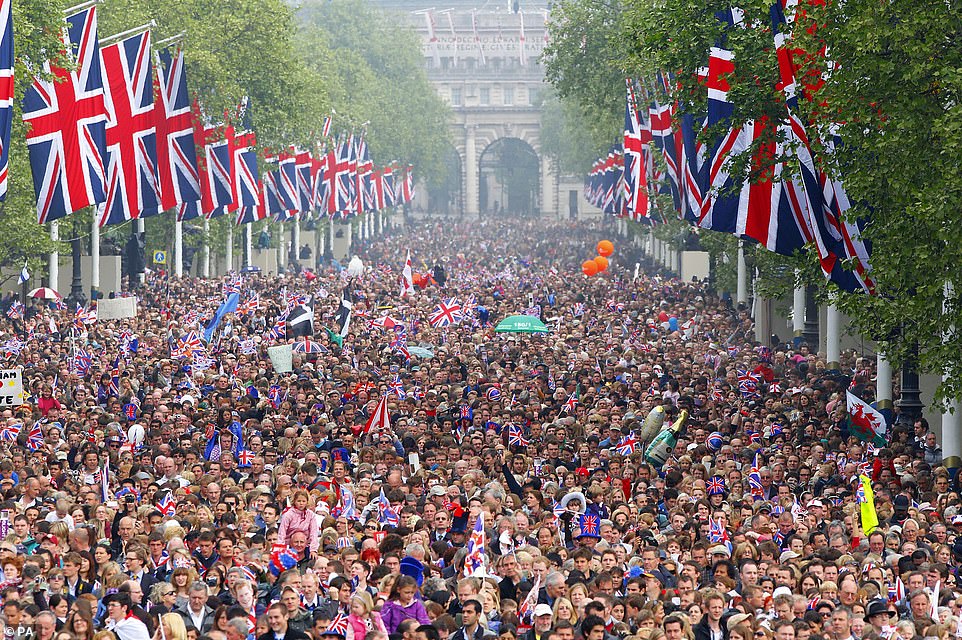 Hard to believe: Crowds gathered all day long on the Mall outside Buckingham Palace on the couple’s wedding day, waving union jacks and cheering as the newlyweds appeared on the balcony

Love train: Kate Middleton arriving at Westminster Abbey with her father Michael and sister Pippa, offering the crowd a first glimpse of her beautiful designer gown, which included a bodice hand-stitched by the world’s best seamstresses at the Royal School of Needlework

Other highlights included sister-of-the-bride Pippa Middleton’s show-stealing entrance to Westminster Abbey, which later saw the now mother-of-two quickly dubbed ‘Her Royal Hotness’. Kate’s sibling did have quite a task on her hands though, the bridal train measured two metres and stretched 70cm.

The sight of Prince William driving his new bride from Buckingham Palace to Clarence House in an open top vintage blue Aston Martin DB6 MkII, decorated with love heart balloons and a ‘just wed’ number plate, was another moment fondly etched in history.

The car, which has been updated to run on eco-friendly fuel, was lent to William by Prince Charles, who was gifted the now 51-year-old Aston Martin at his 21st birthday party.

The couple had arrived at Buckingham Palace from Westminster Abbey in a 1902 state Landau that was used by Charles and Diana on their wedding day 30 years ago. 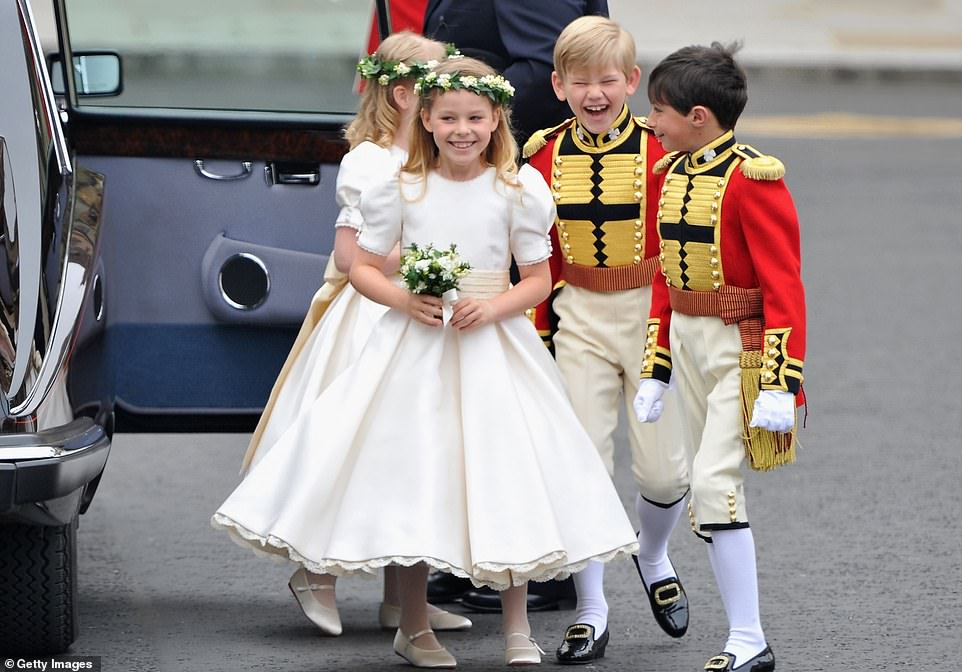 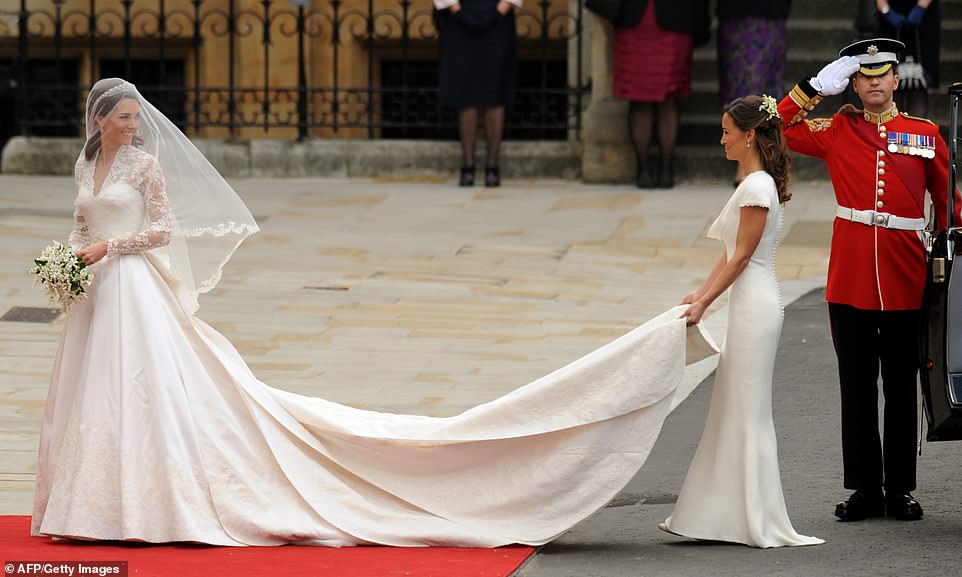 Pippa Middleton stole more than a few headlines after she helped her older sister adjust the train on her Alexander McQueen gown. Pippa wore a stunning white cowl-neck dress with cap sleeves for Kate’s big day 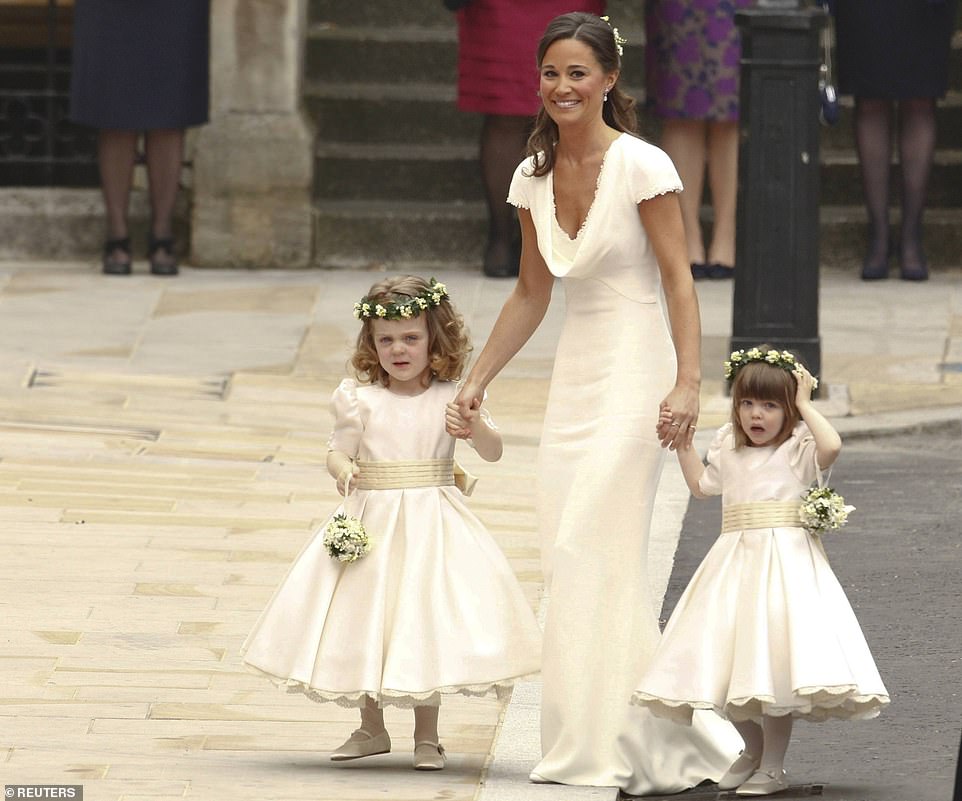 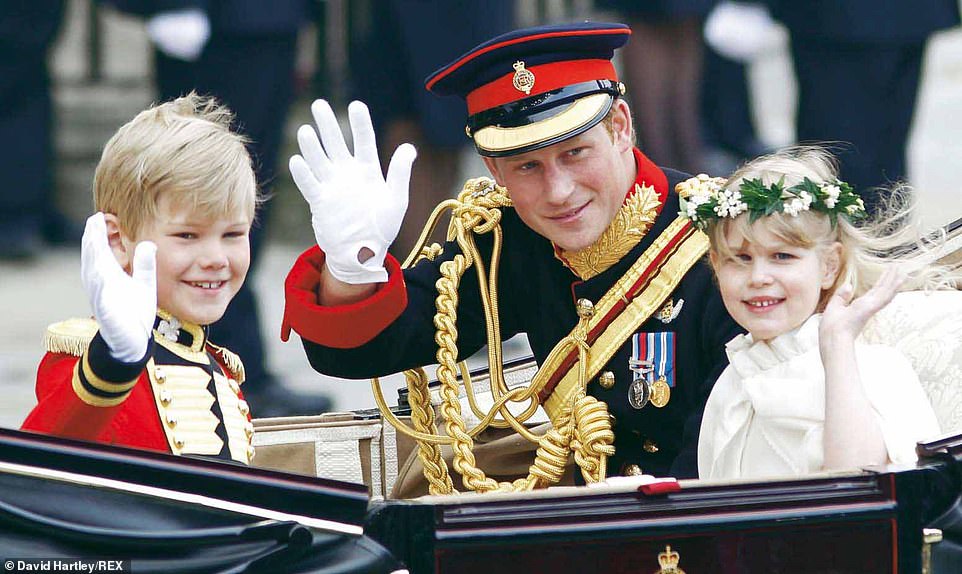 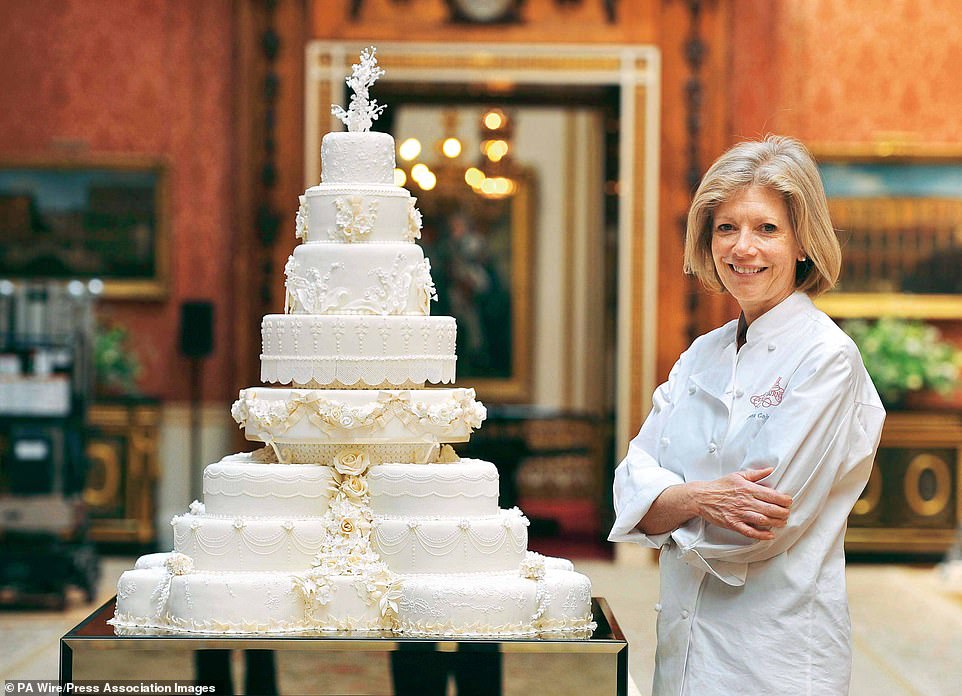 Then there was the couple’s cake, eight-tiers of a temptation that featured 900 individually iced flowers and was made by Fiona Cairns. The stunning creation had 17 different flower designs, all with their own individual meaning, including a daffodil representing Wales and new beginnings.

The cake was actually made from 17 individual fruit cakes – 12 of which formed the base. A garland design around the middle matched the decorations in the Picture Gallery in Buckingham Palace.

Guests were also able to enjoy a multi-tiered chocolate biscuit cake at the request of Prince William. The newlyweds commissioned McVities to craft the creation as an alternative to the official wedding cake. It was decorated with white chocolate water lilies and milk chocolate leaves.

Prince Edward and Sophie Wessex’s daughter Lady Louise Windsor was just seven when she made up part of Kate’s troupe which accompanied her down the aisle. Pictured, arriving at Westminster Abbey 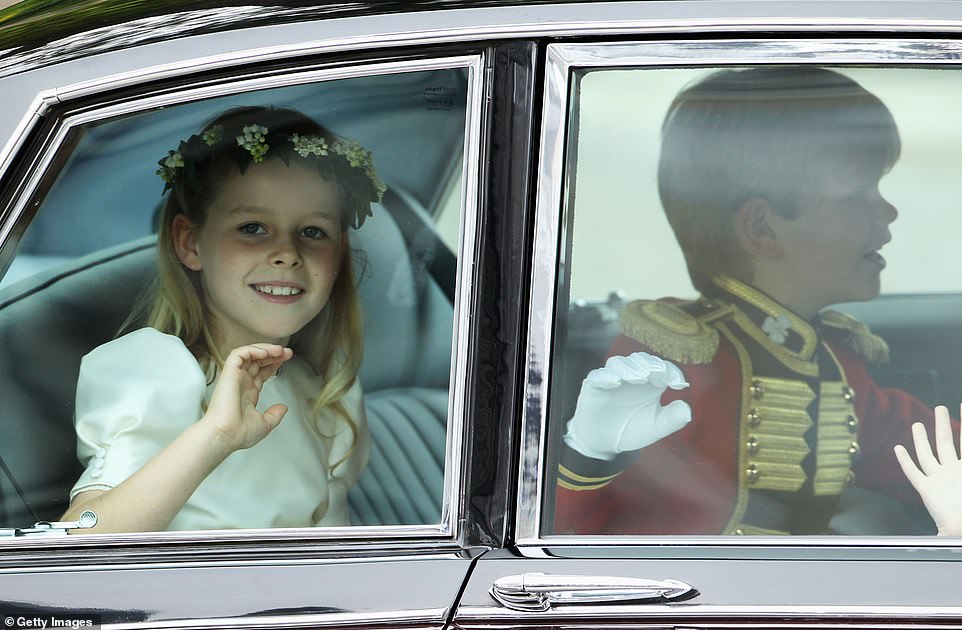 Bridesmaid Margarita Armstrong-Jones and page boy Tom Pettifer wave as they arrive to attend the Royal Wedding of Prince William and Kate Middleton at Westminster Abbey on April 29, 2011 in London 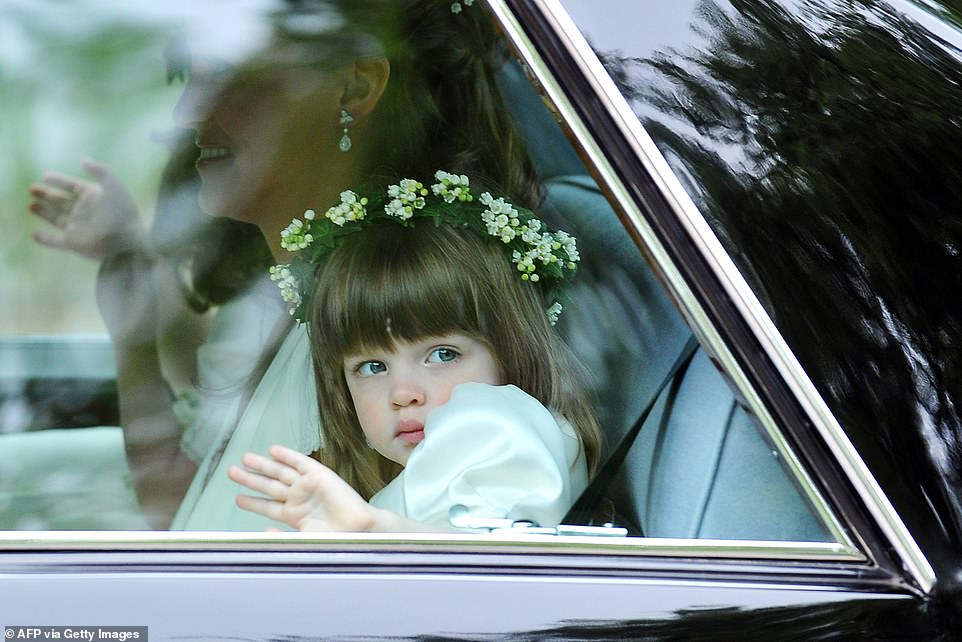 Eliza – the granddaughter of Prince William’s stepmother Camilla, Duchess of Cornwall – was just three when she took on the role of flower girl in front of the nation at the royal wedding (pictured)

As a nation emerging from lockdown after lockdown during the pandemic, some of the most striking images to reflect on are of the masses mingling on the Mall.

London was a blanket of red, white and blue as a million well-wishers came together to catch a glimpse of this extraordinary wedding.

Waving Union Jacks, the crowds roared with excitement as the couple arrived in their open-top carriage after making the journey from Westminster Abbey to Buckingham Palace via Horse Guards Parade.

Thousands then waited patiently for that kiss – and were then given a surprise second. The moment was caught on giant screens across London in Hyde Park, Trafalgar Square and at many more gardens, squares and street parties. across the UK, and indeed the world.

At the time, Westminster City Council said the Royal wedding was the capital’s largest ever event. Paul Reid, head of operations, said he estimated nearly a million people were on the streets of London.

Despite the huge crowds police made just 52 arrests among the crowd in a day of unique goodwill. 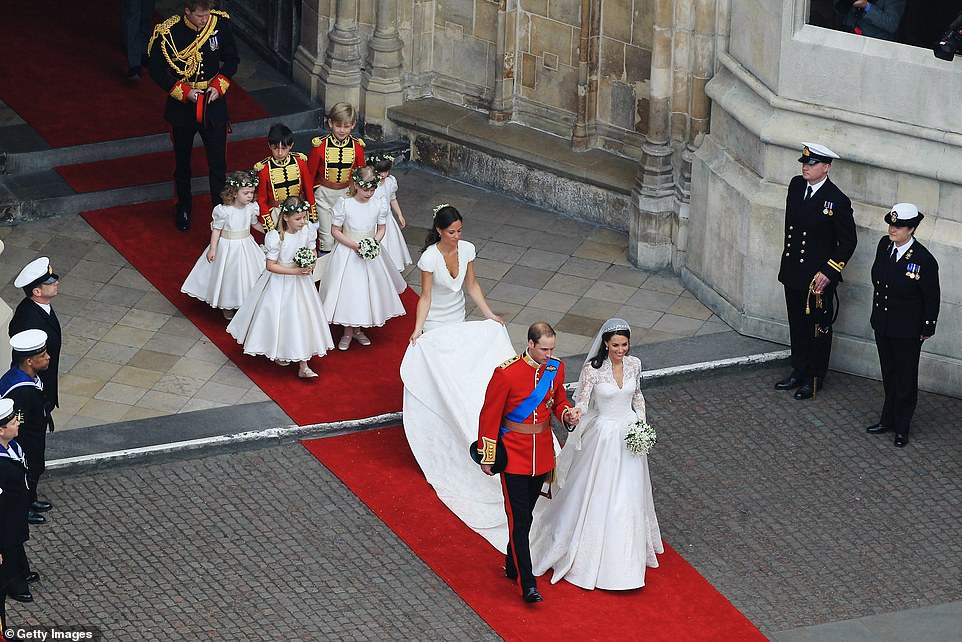 William, the son of Prince William and Kate’s former aide, Jamie Lowther-Pinkerton, was ten at the time of the wedding and is now 17. Pictured, Duke and Duchess of Cambridge with their page boys and bridesmaids as they prepare to begin their journey by carriage procession to Buckingham Palace 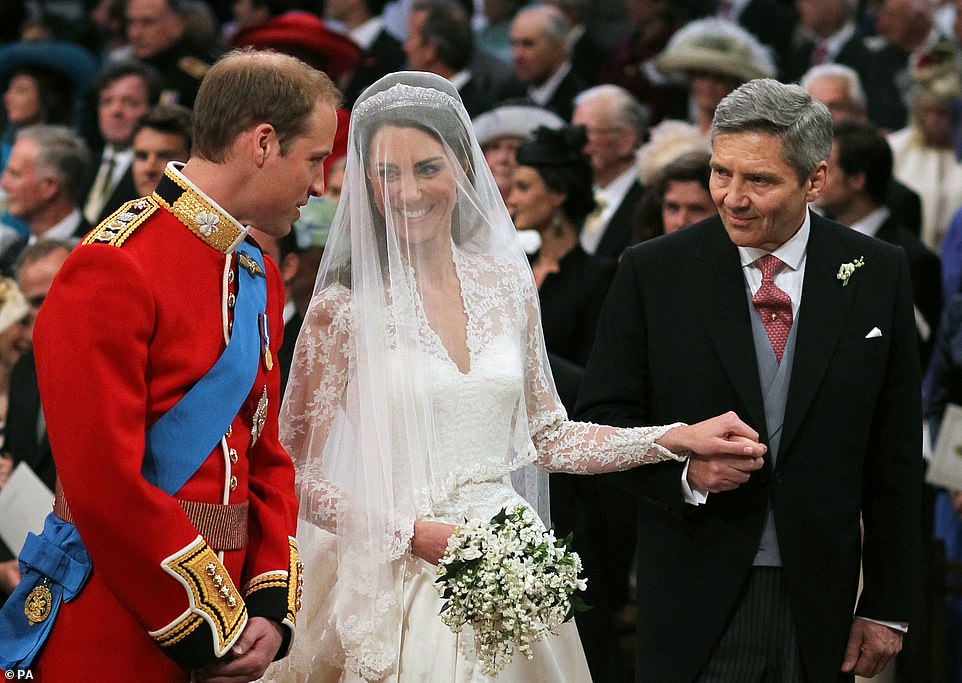 Over to you William! Michael Middleton pictured giving his daughter away at Westminster Abbey…as she went from Catherine Middleton to future Queen Consort of 17 nations 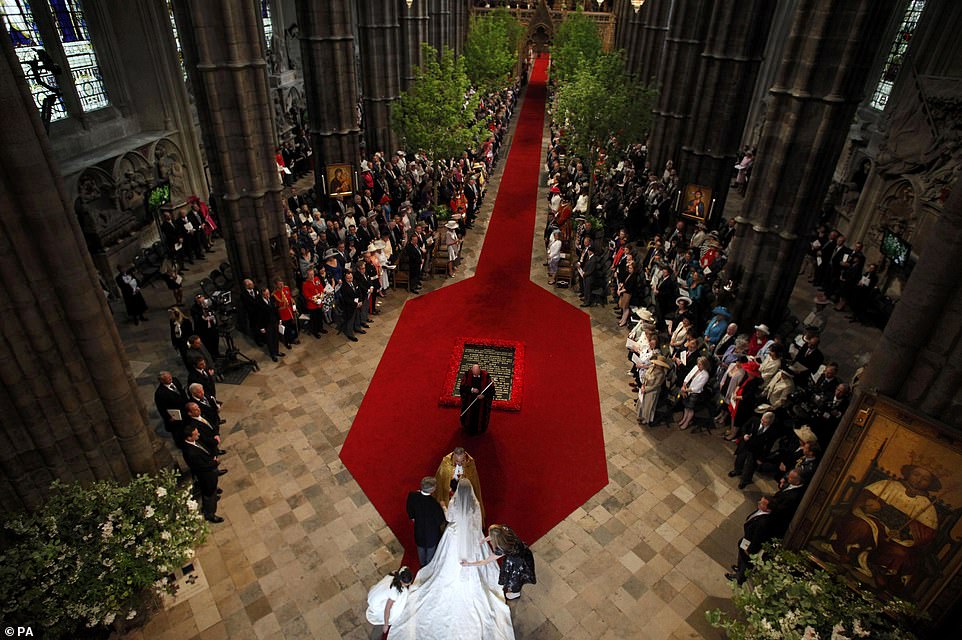 The soon-to-be-newlyweds pictured from above with the then Archbishop of Canterbury, Dr Rowan Williams, as they prepared to take their wedding vows 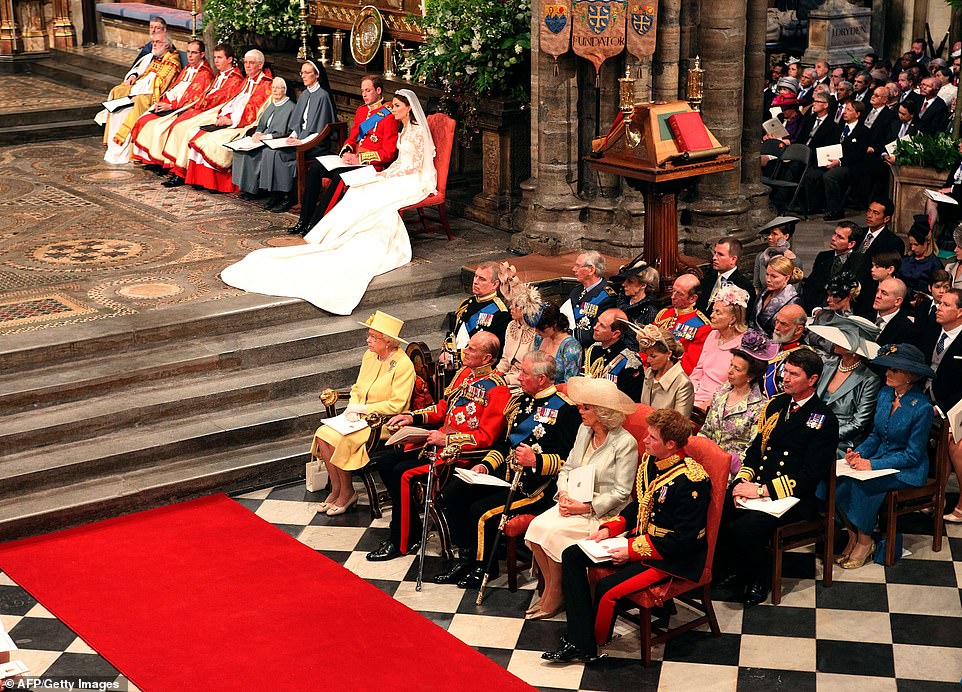 The Queen, the late Prince Philip, Prince Charles and the Duchess of Cornwall with a youthful-looking Prince Harry sat in the front row to watch Kate and William take their vows 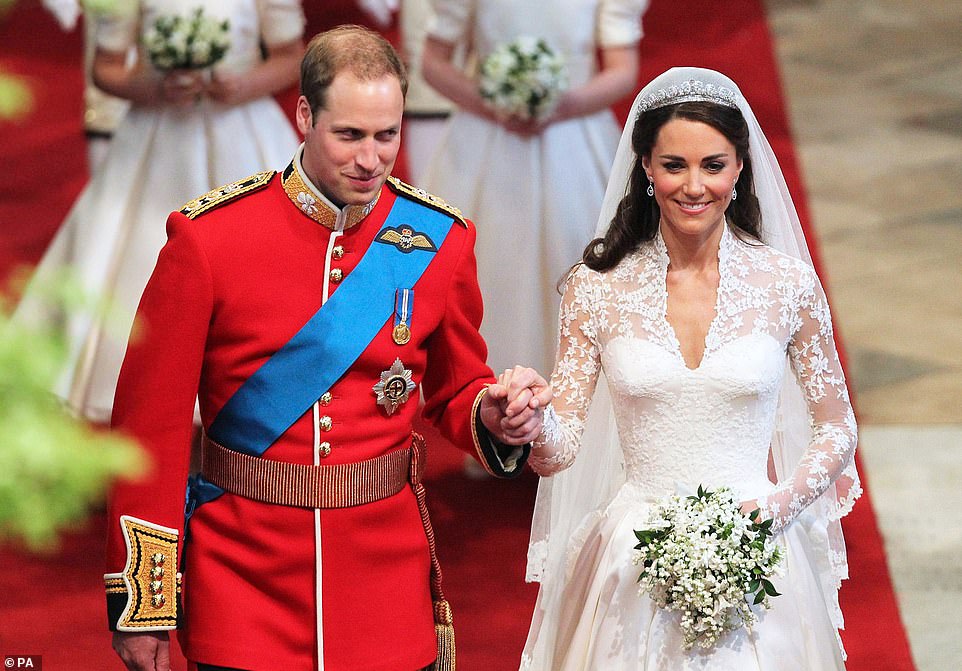 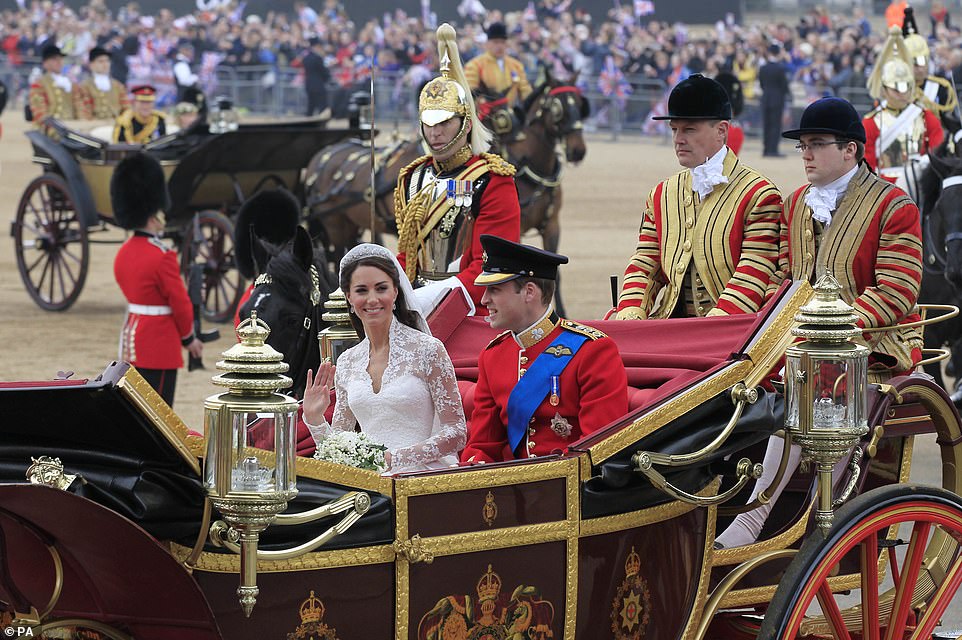 On their way to Buckingham Palace, the new Duke and Duchess of Cambridge passed through Horse Guards Parade as they rode in a royal carriage to greet thousands of well-wishers lining the capital’s streets

The cake contained 17 different types of flower made from sugar paste, each one picked by Kate for their meaning or symbolism

The cake had 900 sugar paste flowers in total

10,000 canapes were prepared by 21 chefs for the Buckingham Palace reception

More than 5,000 police officers were on duty to ensure event ran like clockwork

10,000 people were crammed into Trafalgar Square to watch the ceremony on a big screen

More than 1,300 armed forces personnel played a role in the wedding

Ahuge surge in electricity demand marked the end of television coverage of Kate and William’s procession to Buckingham Palace. The 2,400 MW boost as cameras switched back to television studios at 12.40pm was equivalent to nearly one million kettles being boiled at once

Thetop three surges in demand are: 2,800 MW at the end of the penalty shoot-out for England’s World Cup semi-final against West Germany in 1990; 2,600 MW after a 1984 episode of The Thornbirds; and 2,570 MW surge at half-time during England’s semi-final match against Brazil in the 2002 World Cup.