EXPRESS INFORMER > News & Politics > Highland cow reverses between £90,000-worth of new cars without scratching them with its horns

Tricky moo-noeuvre! Highland cow reverses between £90,000-worth of new cars without scratching the paintwork with its horns

This is the bizarre moment a Highland cow reverses itself out from between a collection of parked cars, narrowly avoiding the motors with its large horns.

In the footage, the cow can be seen facing the camera, stuck between a blue ŠKODA Octavia and a silver ŠKODA Yeti.

The cow tilts its head to the side so that its horns do not catch or scrape along the side of either car.

A Highland cow slowly edges its way backwards out from between parked cars at the Meadens ŠKODA dealership in Brockenhurst, Hampshire, with an employee standing nearby to oversee the manoeuvre

It then slowly walks backwards between the cars as an employee of the dealership, wearing a face mask, gently directs it from behind.

On one occasion, the cow narrowly avoids scratching a car with its right horn as it tries to edge out from between the last couple of vehicles.

Tom, from Milford, Hampshire, said: ‘Me and one of the other sales guys were out moving cars on the site that afternoon.

‘We saw the Highland cow earlier and we saw he went to go in between the cars. We’ve had it happen before and they do damage to vehicles so we ran over.

‘We knew he was getting into a situation where he wouldn’t be able to get himself out very easily so just went round the back and slowly walked towards him so he walked backwards. 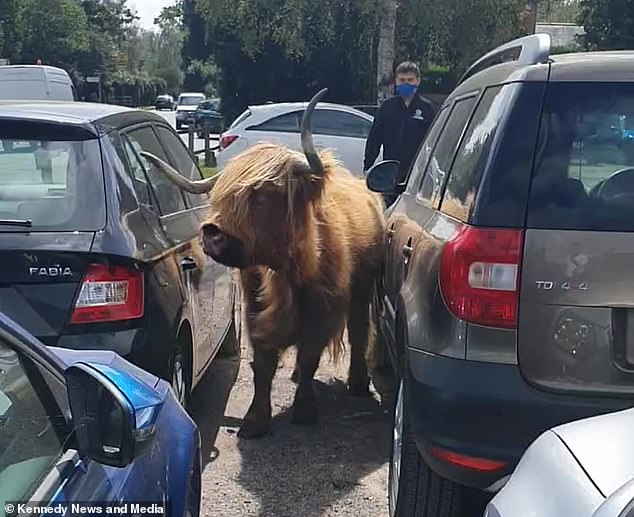 At one hair-raising moment, the cow turns its head towards one of the parked cars and narrowly avoids scratching it 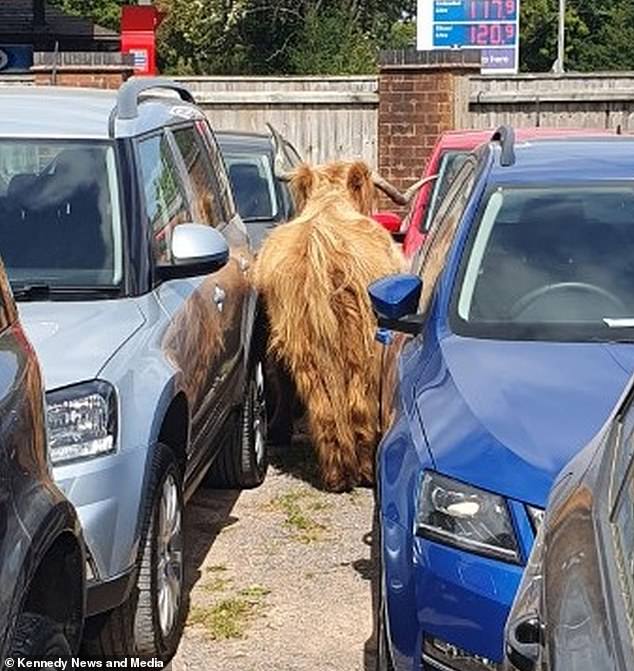 ‘The last thing you want to do is startle it because it’s going to cause loads of damage, so we just took it easy and he did a great job backing up.’

Luckily, none of the six brand-new motors, valued at £90,000 between them,  sustained any damage.

The incident in the video took place on August 22 and Tom said that it wasn’t the first time that an animal has wandered between the cars at his dealership.

A black cow had previously wandered into the forecourt and squeezed between cars and ended up damaging a bonnet and knocking multiple wing mirrors off.

It’s not just cows that visit the dealership though as donkeys, horses and pigs have all been spotted in nearby streets. 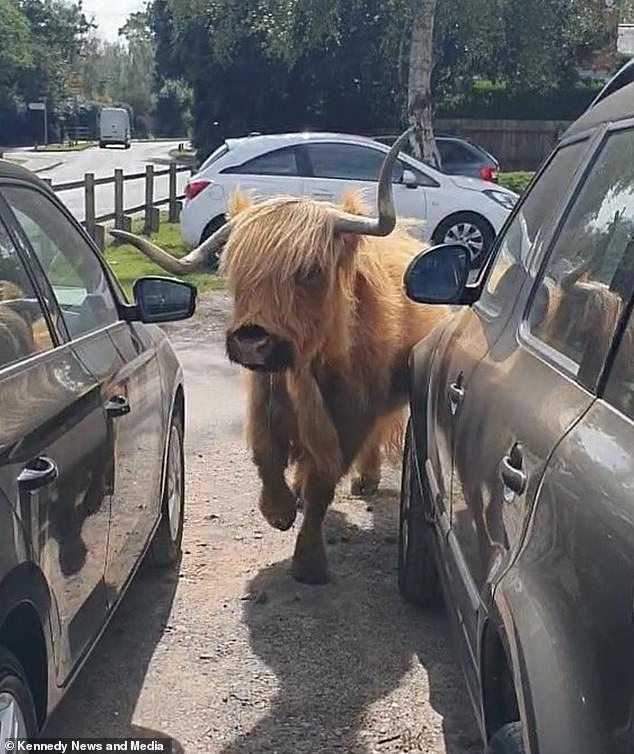 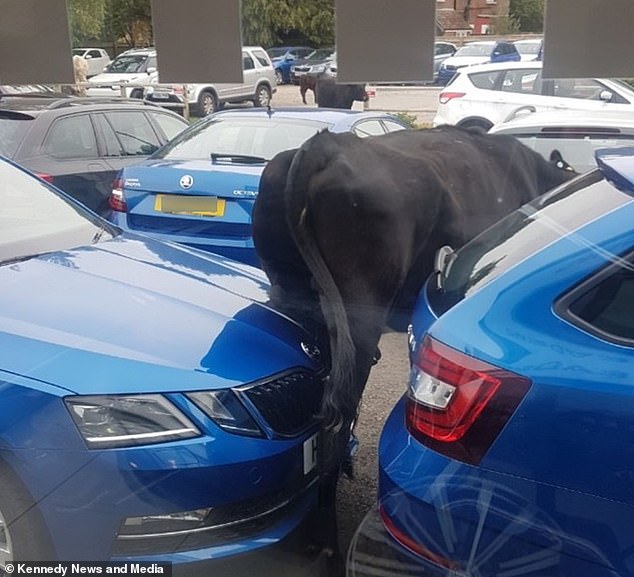 Dealer principal Tom Sexton, 32, said that there have been other incidents of animals wandering between cars at his family-run dealership, such as a black cow (pictured) which damaged the bonnet of one car and left several wing mirrors dangling

Tom said: ‘The cows are the most stupid ones, they’re the ones that tend to get stuck in situations or try and jump over stuff that they can’t.

‘I think they’re nosey, they’re quite inquisitive and quite often they’ll have a look around.

‘We’ve got electric automatic opening doors and last year they came up to the door, made the door open and just mooed at the door.

‘We had to put the doors onto manual so they couldn’t come in.

Due to the high number of animals found in the area, Tom said he isn’t too worried about any potential damage caused to his vehicles and believes he is lucky to be surrounded by such ‘beautiful nature’.