Everybody knows by now that junk food is filled with sugar, salt and saturated fats that can lead to obesity and chronic obesity.

But many will be surprised to learn there are even more harmful ingredients lurking in their favorite treats.

In a report last month, researchers found toxic metals in every dark chocolate bar they tested, including big-name brands like Hershey’s, Lindt and Tony’s Chocolonely.

It may also be a surprise that a chemical used in explosives sometimes finds its way into breads, muffins and cookies, or that an ingredient in lighter fluid is used to keep chicken nuggets fresh.

In recent weeks experts also have issued warnings about red food dyes in candy, Doritos and sodas, which have been linked to cancer and inflammatory bowel disease.

Here are some of the most surprising toxins in your food:

Pictured above are six foods containing toxins that you probably never realized were there. They include a powder used in bread to help it rise faster that is also included in explosives, lead from car exhausts in dark chocolate and a substance found in lighter fluid that is also added to chicken nuggets to keep them fresh for longer

Substance found in lighter fluids, is also in chicken nuggets

The chemical — tert-Butylhydroquinone (TBHQ) — is considered to be safe in low doses in foods.

But in higher amounts it has been linked to tumors, liver enlargements, convulsions and paralysis.

Food companies swear by TBHQ because it can preserve food, keeping its flavor, color and nutritional value for longer.

The Food and Drug Administration (FDA) approved the chemical for use in foods back in the 70s, when fast foods were becoming ever-more popular.

Now it is claimed to be in everything from McDonald’s chicken nuggets and nstant noodles to snack crackers.

The FDA currently allows for no more than 0.02 percent of an item’s total fat and oil content to be TBHQ.

Authorities in Europe have also determined that TBHQ is safe to use in foods in low concentrations.

The chemical is made from butane, which is stored in lighters as a liquid and released as a gas ignited by a spark.

Potassium bromate has been used as an explosive for decades.

But the white powder is also mixed into flour used for baked goods such as breads and cookies, because it can help dough to rise and keep its shape.

Lab studies have repeatedly linked it to cancers in the thyroid and peritoneum — the thin layer of cells covering the bladder, rectum — and the uterus.

But the FDA is yet to outlaw its use in the United States, and continues to consider the substance as ‘GRAS’, generally recognized as safe.

This contrasts with the view in many other countries and blocs, including the UK, Canada, India, Brazil and the European Union — which have all outlawed it.

Warnings over its potential to cause cancer date back to 1999, when reports on this risk began to be released.

The food industry has long argued it is safe to use because during cooking the powder is converted into potassium bromide, a non-carcinogen.

But tests in the UK back in 1994 showed that potassium bromate remains in foods even after cooking.

This included all six unwrapped bread products tested, and seven out of 22 wrapped that were checked.

California has taken action against the ingredient, requiring products that use it to carry a warning label for consumers. 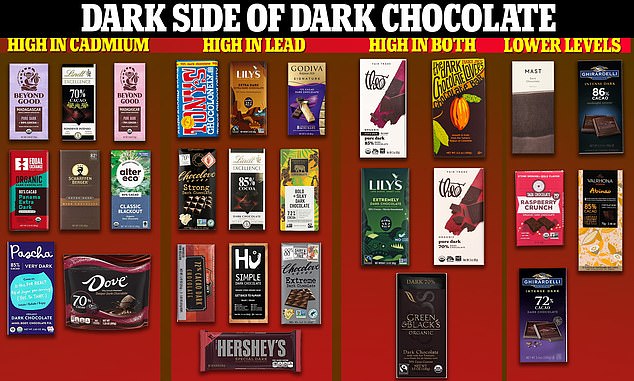 The above graphic shows the 28 chocolate bars tested by New York-based nonprofit Consumer Reports. All were found to contain lead and cadmium. Consumer Reports compared levels of the heavy metal in about an ounce of the chocolates to the recommended daily exposure levels from the Californian Office of Environmental Health Hazard Assessment

Dark chocolate has been repeatedly lauded for its health benefits, from promoting heart health to packing a heavy punch of antioxidants.

But a recent investigation into 28 popular brands — including Lindt, Hershey’s and Trader Joe’s — found all the bars contained alarming amounts of cadmium and lead.

Lead exposure in children is often difficult to observe, with no immediate symptoms.

But if there is suspicion a child has been exposed, then parents should talk to their child’s healthcare provider about getting a blood test.

Lead is more harmful to children under six years old because their body is still developing.

– Damage to the brain and nervous system;

This can lead to:

Cadmium ends up in chocolate when it is sucked up through cacao tree roots, with exposure over a long period of time linked to kidney failure and weak bones.

But lead, which is well-known to be dangerous to humans, gets into chocolate after cacao beans are left out to dry by roadsides — and become coated with lead from car fumes.

But in children it can damage brain development, as well as leading to learning and behavior problems and issues with speech and hearing.

Experts say there is too little heavy metal in each individual bar to poison someone, with this only likely to happen after eating more than an entire sharing-sized bar.

The FDA sets no national limit for lead and cadmium levels in chocolate.

A spokeswoman for the agency told DailyMail.com last month: ‘The FDA continues to monitor and regulate levels of environmental contaminants, including lead and cadmium, in foods.

‘If the agency finds that the level of a contaminant causes the food to be unsafe, we take action.’

It turns out that a chemical found in vomit is also present in some butters and parmesan cheeses.

Called butyric acid, it is a short-chain fatty acid made naturally that ends up in animal products — such as those using milk.

About three to four percent of butter is butyric acid, which is behind the disagreeable smell created when the food turns rancid.

Few studies have been carried out into the substance, but those that have suggest it has positive health benefits.

The substance has already been linked to a lowered risk of irritable bowel syndrome (IBS), colon cancer and improved insulin sensitivity in type 2 diabetics.

No estimates are available on how much of the acid is needed to prompt health benefits in people.

But raising fiber intake may be the best strategy, scientists say, because this triggers bacteria breaking it down to produce chemicals like butyric acid.

A substance deployed in paints, rubber and plastics is also hidden in many popular candy brands.

Industries often use titanium dioxide to give their products a white color and glossy sheen.

But manufacturers of popular candies, salad dressing and chewing gum also use it to give a smooth texture or as a white colorant.

The FDA has imposed strict guidelines on how much can be used in food, setting a maximum limit of no more than one percent.

While US regulators say the compound is safe in small amounts, the additive has been banned in European Union countries.

Scientists have repeatedly found evidence of these insidious chemicals in a majority of foods tested.

They have previously been linked to health problems including hormone disruption, infertility and an increased risk for learning, attention and behavioral disorders in children.

The substances mainly get into foods when they come into contact with packaging and handling equipment, such as cellophane and papers.

Concerns are being raised over microplastics as they are introduced into the food chain amid widespread use of plastics.

But researchers say the levels being detected in foods at present are not such that they would raise alarm at federal agencies.