Eagle-eyed readers questioned how the new £2 coin, which marks the 75th anniversary of the writers’ death and is inspired by The War of the Worlds and The Invisible Man, could include a series of errors that stray far from Well’s creations.

Fans also criticised the depiction of the Invisible Man which shows him in a top hat despite the novel describing him arriving to Iping, West Sussex, with a face bandaged under a ‘wide-brimmed hat’.

Artist Holly Humphries questioned why the famous creatures known for their tripod bodies had been illustrated with four legs.

Taking to Twitter to she wrote: ‘This is a new commemorative HG Wells £2 coin for 2021.

‘Now, as someone who particularly likes one of his very famous stories, can I just note that the big walking machine on the coin has four legs? Four legs. The man famous for creating the martian tripod. FOUR LEGS ??????’

Meanwhile science fiction novelist and professor of 19th-century literature Adam Roberts, joined in with the debate to point out that the Invisible Man, whose face is hidden entirely by bandages, wore a ‘wide-brimmed hat’.

He said: ‘Several people have tweeted this into my timeline, so I might add: not only did Wells’ Tripods have *three* legs, Griffin, his invisible man, does not wear a top hat (he arrives at Iping, face bandaged under a ‘wide-brimmed hat’). So it’s two for two.’

The coin was designed by the American artist Chris Costello who explained that he took inspiration from a ‘variety of machines featured in the book including tripods and the handling machines’.

Unveiling the coin this month he said: ‘The characters in War of the Worlds have been depicted many times, and I wanted to create something original and contemporary.

‘My design takes inspiration from a variety of machines featured in the book – including tripods and the handling machines which have five jointed legs and multiple appendages.

‘The final design combines multiple stories into one stylised and unified composition that is emblematic of all of HG Well’s work and fits the unique canvas of a coin.’

‘I was very excited to discover that I won the competition for this £2 coin as it is my second design sculpted and produced by The Royal Mint. 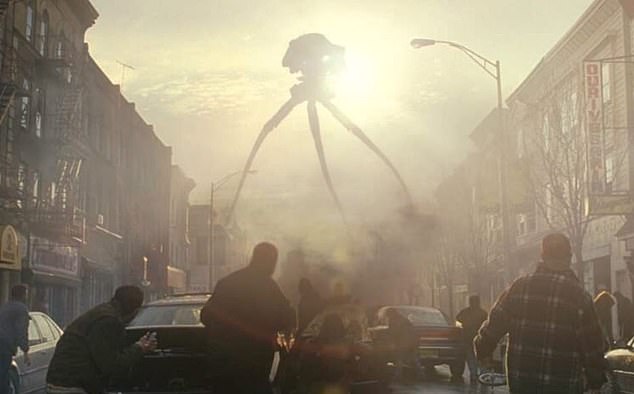 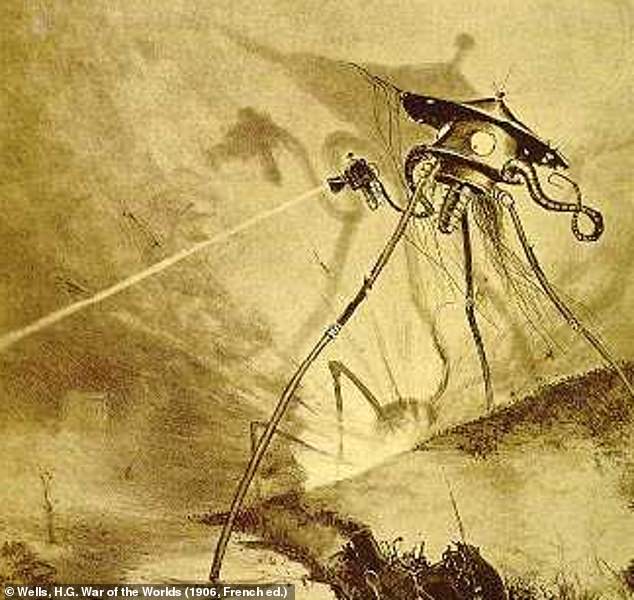 Chris Costello, who designed the coin, said he took inspiration from a ‘variety of machines featured in the book including tripods and the handling machines’

‘As an American, I am honoured to be included among The Royal Mint’s winning designers and am very happy that my HG Wells design will document the legacy of this extraordinary author and visionary for many years to come.’

The War of the Worlds, which was first published in 1897, is one of the most popular science fiction works of all time and has spawned a number of films, radio dramas, television programmes and even a musical.

It tells the tale of two brothers in London as the country is invaded by monstrous Martians and their fight for survival.

In 2017, a sequel, entitled The Massacre of Mankind and set in 1920s London, described how the Martians had returned to the planet having learnt their lesson from their previous attempt when they were beaten by the common cold.

The book was written by Stephen Baxter, who is known for his collaborations with sci-fi legend Terry Pratchet

Speaking at the time Mr Baxter said: ‘HG Wells is the daddy of modern SF. He drew on deep traditions, for instance of scientific horror dating back to Mary Shelley’s Frankenstein and fantastic voyages such as Jonathan Swift’s Gulliver’s Travels.

‘And he had important near-contemporaries such as Jules Verne. But Wells did more than any other writer to shape the form and themes of modern science fiction, and indeed through his wider work exerted a profound influence on the history of the twentieth century.

‘Now it’s an honour for me to celebrate his enduring imaginative legacy, more than a hundred and fifty years after his birth.’

When asked about the coin’s errors, a spokesperson for The Royal Mint told The Guardian: ‘We have created a new £2 coin to celebrate the life and works of HG Wells.

‘The coin depicts scenes from famous works such as War of the Worlds and the Invisible Man as imagined by designer Chris Costello.’