The hero police officer who rugby tackled the Reading terror suspect was a rookie and had only been in the job for 14 months.

The father-of-two was able to pin 25-year-old Khairi Saadallah to the ground, as he tried to flee the scene of the attack in Forbury Gardens, Reading, at around 7pm on Saturday.

Saadallah, a Libyan given asylum in 2018, was arrested on suspicion of murder. The victims of the stabbings were three friends enjoying a picnic — Joe Ritchie-Bennett, 39, David Wailsand James Furlong, 36.

The PC, who police are not identifying, had only been with the force for 14 months when he bravely apprehended Saadallah.

Saadallah, a Libyan given asylum in 2018, has been arrested on suspicion of murder and remains in custody 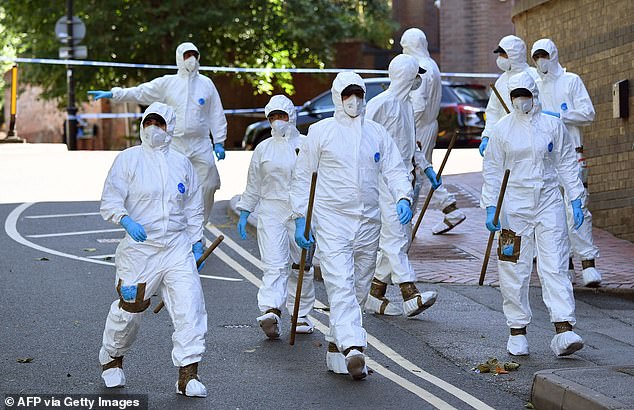 Police forensics officers dressed in Tyvek protective PPE (personal protective equipment) suits and wearing masks, prepare to conduct a search as they work outside the walls of Forbury Gardens park in Reading yesterday 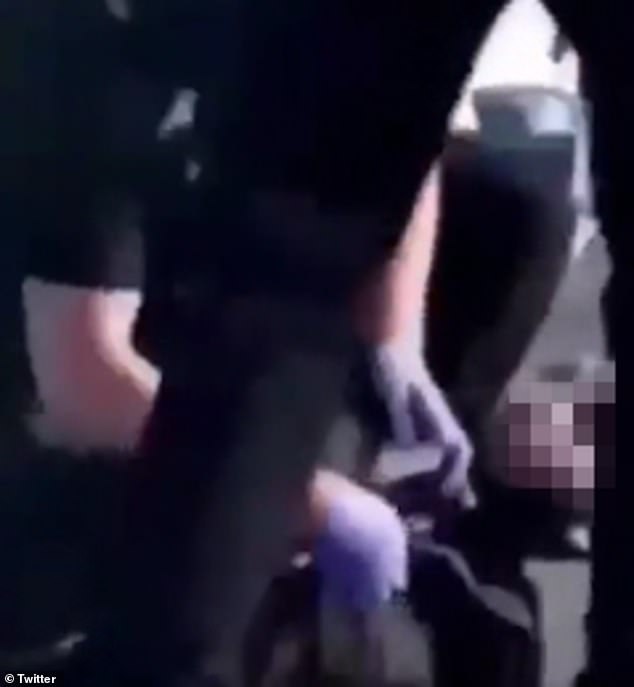 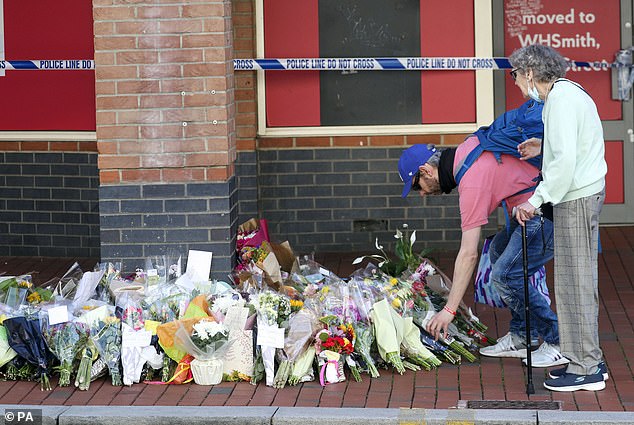 Floral tributes are left at Forbury Gardens, in Reading town centre, today near the scene of a multiple stabbing attack

Speaking about the hero PC, a source told The Sun: ‘He’s an absolute legend. Everyone has been talking about him.

‘His family and friends are so proud, as you can imagine.

‘Very senior police officers at the force have also expressed their thanks. It’s incredible. He’s a credit to the force and policing. We all think he deserves a medal.’

James Antell, a parliamentary researcher who works for Tory MP Chris Loder, also ran towards danger and used his own shirt to stem the bleeding on one victim, and used CPR on a second victim until paramedics arrived, as reported by The Times.

He was praised in parliament by Mr Loder who said: ‘ ‘In the same way that [Tobias Ellwood] did so in March 2017, another member of our parliamentary family who by chance was at Forbury Gardens on Saturday, ran courageously towards danger, his only focus to help the injured.’ 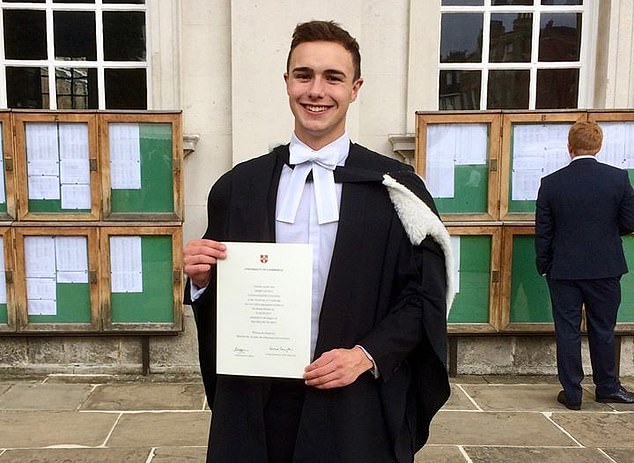 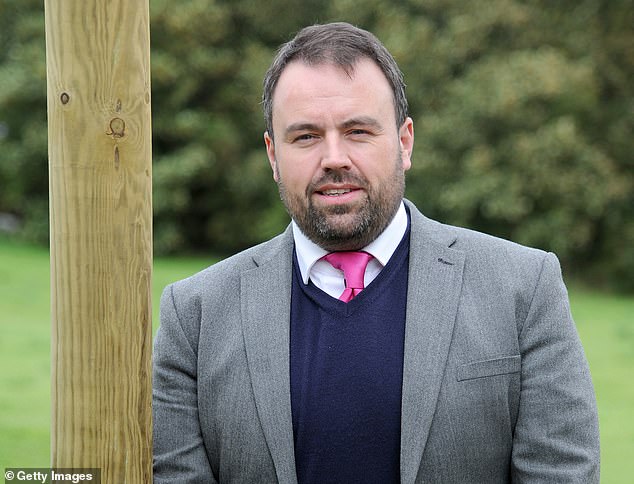 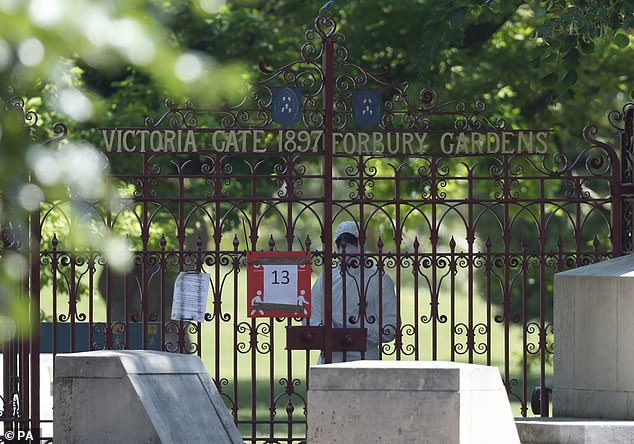 A forensic officer at Forbury Gardens, in Reading town centre, today, the scene of a multiple stabbing attack which took place at around 7pm on Saturday, leaving three people dead

He added that he was ‘extremely proud’ of his researcher’s ‘remarkable and extraordinary effort’.

According to his LinkedIn profile, Mr Antell previously studied at Cambridge University and spent time in America at Harvard and at the University of Georgia.

He worked as a Analyst for CIL Management Consultants before starting work with Mr Loder  this year.

After being hauled to the ground by the unnamed police officer, Saadallah was arrested on suspicion of murder.

He was later re-arrested under Section 41 of the Terrorism Act, which gives powers to hold him without charge for up to 14 days. 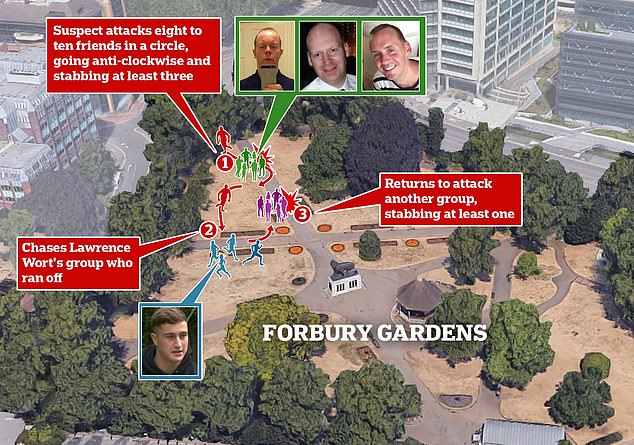 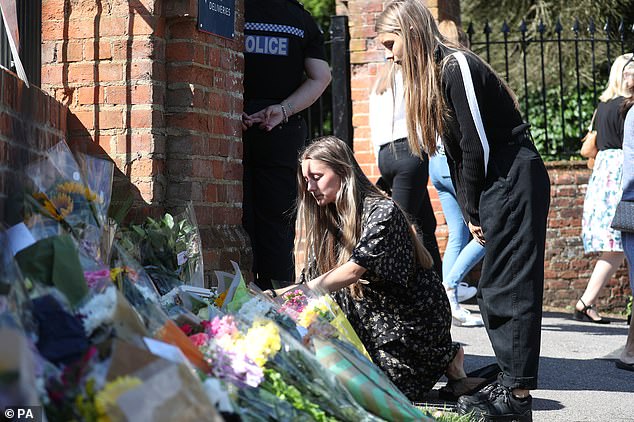 Flowers are placed at the entrance to the Holt School, Wokingham, Berkshire, in memory of teacher James Furlong, a victim of the terrorist attack in Forbury Gardens, Reading, on Saturday in which three people died 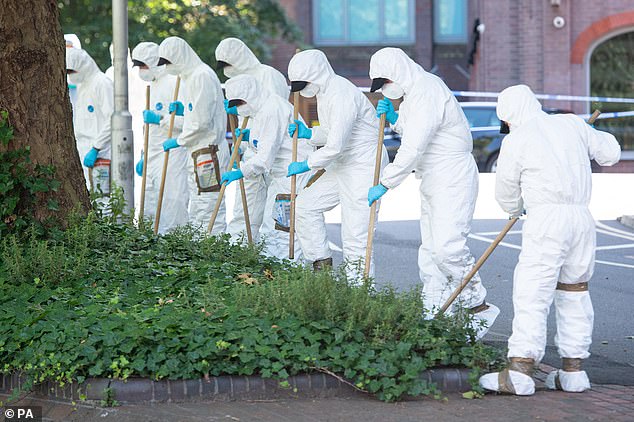 Saadallah, a refugee of the civil war in Libya who briefly came to the attention of MI5 last year, was released from prison earlier this month after he was convicted of non-terror offences and police had reportedly been in contact with him just hours before the attack.

It came as police revealed Saadallah, 25 — known as Libya — may have known the three dead men.

Former convicts who knew Saadallah have today claimed he was addicted to synthetic drug spice.

The three victims used to drink at The Last Crumb in Caversham, Reading, opposite one of the alleged killer’s old homes.

Tributes were paid to Joe Ritchie-Bennett, 39, originally from Philadelphia in the US, history teacher James Furlong, 36, and David Wails today.

A heart-shaped floral tribute to the three victims could be seen outside the Blagrave Arms pub in Reading, alongside candles and a note which read: ‘The Blagrave Arms management and staff are devastated at the announcement that the three people who died in the Forbury Gardens attack on Saturday were regular customers and very dear friends of ours.

‘Our hearts go out to their family and friends, and the other victims of this horrific incident.’

A message among the flowers paid tribute to the three, adding: ‘Our friends were the kindest, most genuine, and most loveliest people in our community that we had the pleasure in knowing.

‘They’ll be forever in our thoughts.’

‘Their loss is a tragedy to so many people,’ Martin Cooper, 36, who is chief executive of LGBT+ charity Reading Pride, told the PA news agency.

‘They will be sorely missed by myself personally and many in the community.’

Mr Ritchie-Bennett’s father said the attack had caused ‘some of the worst days of my life’ and led to ‘sleepless nights’.

Speaking in the US, Robert Ritchie-Bennett said: ‘We’re going to bring him back here and bury him here because we want him close by.’

Meanwhile, a friend of the three attack victims, Michael Main, described the ‘amazing, caring and beautiful men’ he had known for six years.

Speaking to BBC Breakfast, he recalled Mr Wail’s ‘dry sense of humour’ and how ‘he would do anything for anyone that he could’.

Mr Main said Mr Furlong was a ‘passionate’ and ‘inspirational’ teacher, while Mr Ritchie-Bennett was a ‘funny and a happy-go-lucky, true and unique individual’.