EXPRESS INFORMER > News & Politics > Hero Jeremy Renner was trying to save his nephew from being hit by his 14,000lb plow, report says

Actor Jeremy Renner was trying to save his nephew as his snow plow started sliding, when he was pulled under and crushed on New Years’ Day in Nevada.

The 14,000-pound PistenBully snowcat vehicle started sliding sideways after the 52-year-old Avengers star had used it to pull his grown nephew’s truck out of the snow.

The huge vehicle, which runs on tracks, completely rolled over the Hollywood star, leaving him with 30 broken bones, and continued on down the road.

The parking brake on the plow was not engaged and would have stopped the horrific accident, according to a redacted Nevada sheriff’s office incident report.

Actor Jeremy Renner was trying to save his nephew as his snow plow started sliding, when he was pulled under and crushed on New Years’ Day in Nevada

‘The Pistenbully snow groomer began sliding causing Renner to exit the vehicle without setting the emergency brake,’ the report says, according to CNN, who obtained the report through a public records request.

CNN said the report indicates ‘mechanical issues may have been a factor in this accident,’ and notes the brake indicator light inside the plow’s cab was not working.

Renner’s nephew was able to help the actor until emergency responders arrived to the scene, the report says. He was airlifted to hospital, where he was kept for more than two weeks and underwent at least two surgeries. 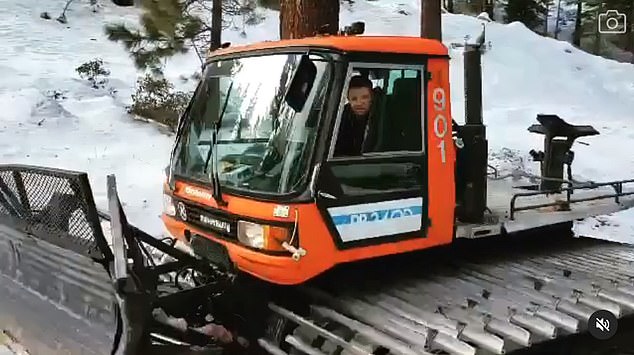 The 14,000-pound PistenBully snowcat vehicle (pictured) started sliding sideways after the 52-year-old Avengers star had used it to pull his grown nephew’s truck out of the snow 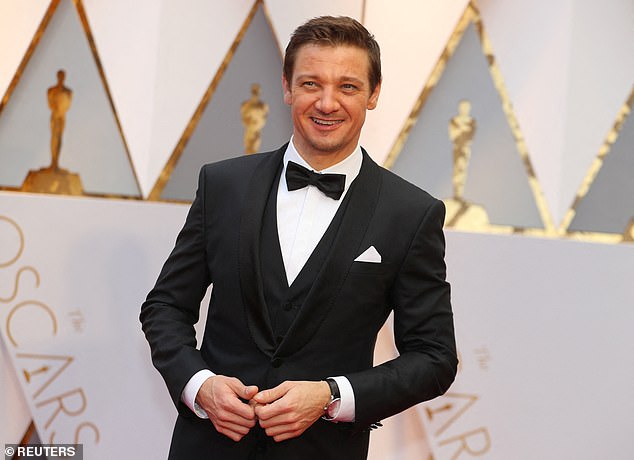 Renner’s nephew was able to help the actor until emergency responders arrive to the scene, the report says. He was airlifted to hospital, where he was kept for more than two weeks and underwent at least two surgeries

According to the report, which spells out the accident in the most amount of detail available so far, Renner told investigators on in hospital January 5 that the incident began to unfold after he had towed his nephew’s truck off his driveway.

He towed the truck, which had become stuck in the snow after unusually heavy snowfall in the area, onto the street.

It was then that the snowplow began ‘sliding sideways,’ he told investigators, at which point it began to roll down the hill.

The report says Renner jumped out of the plow’s cabin, but quickly realized the vehicle was on course to directly hit his nephew.

‘He feared the Pistenbully was going to hit (his nephew), so he decided to attempt to stop or divert the Pistenbully,’ the report says, according to CNN.

In order to get back into the cabin, Renner had to climb onto its moving tracks. As he did so, he was ‘immediately pulled under the left side track,’ the account says.

In a 911 call, also obtained by CNN, the caller is heard saying that the actor had been ‘completely crushed under a large snowcat’. 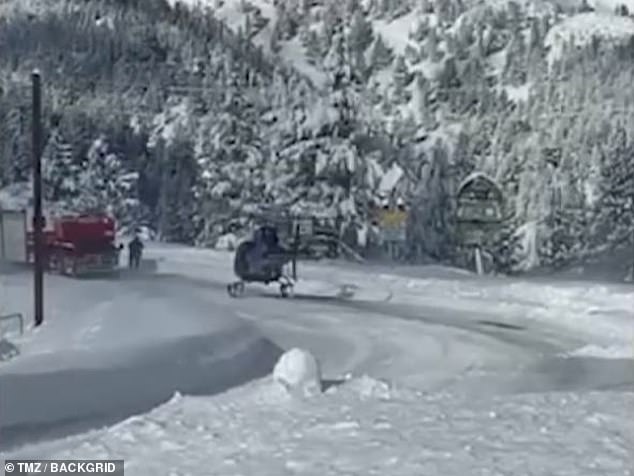 The 52-year-old was airlifted to hospital after he was crashed. Pictured: Video showing an emergency helicopter taking off from the driveway on January 1

A neighbor, who placed the phone call, says that Renner was having difficulty breathing and was starting to drift off to sleep. The 911 operator can be heard telling the caller that he needs to be kept awake.

The neighbor explains that they have him wrapped in blankets, but says ‘the right side of his chest … collapsed – upper torso is crushed.’

In separate audio released to TMZ last week, Renner can be heard moaning repeatedly in the background of the emergency call as the neighbor, who remained nameless, explained his injuries.

Friends and family close to the ‘Bourne Legacy’ star said he ‘almost died’ waiting for help and that it could take up to ‘two years’ for him to recover from the blunt chest trauma and orthopedic injuries.

In the audio clip the unidentified neighbor can be heard telling Renner to ‘lay still’ repeatedly while the emergency call operator asks him questions.

‘I need the address of the emergency please,’ the female operator can be heard saying to the male caller.

‘I told you,’ the male caller says sounding frustrated as Renner continues to moan in agony in the background.

‘I know, I just need to verify it, what is the phone number that you’re calling from,’ the female operator said.

‘Immediately, somebody has been runover by a Snowcat, hurry,’ he is heard saying.

‘What is the phone you’re calling from, just in case we get disconnected,’ she says.

‘Tell me exactly what happened,’ she is heard saying. The neighbor responded: ‘I don’t know, someone is in front of my house and he got run over by a Snowcat. He’s been crushed.’

‘Phone paramedics, ambulance,’ he said, being interrupted by the operator who is heard saying ‘everyone is on their way right now.’

A pause in the phone call gives way to the gurgling moans from Renner who friends said nearly ‘bled out’ during the incident.

‘Listen to me, you might want to get life line out here immediately,’ the audibly distressed neighbor is heard saying.

‘Ok, give me one second,’ the female operator says before asking ‘where is he bleeding from.’ 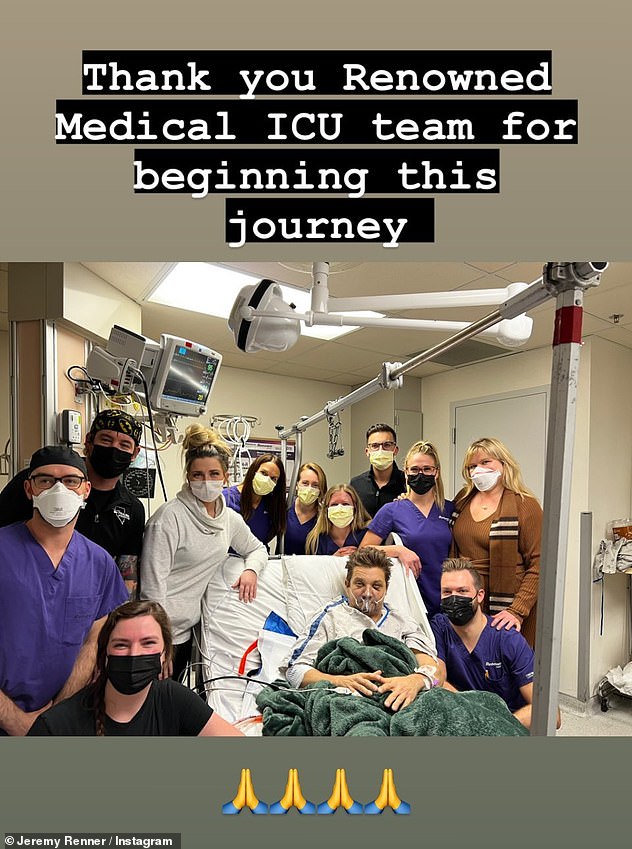 The star underwent two surgeries to place metal pins around his legs, along with chest surgery, after being left in critical condition following the horror accident

‘I don’t know I can’t tell,’ the neighbor says before explaining that Renner is crushed on his right side on his chest, upper torso, and adds that his ‘ribs may be crushed.’

‘He’s got a headwound as well. Can you give me an ETA?’ he is heard saying in the recorded 911 call.

‘It’s hard to give an ETA just because the snow on the mountain I don’t know how quick they’re able to go,’ the female operator said as the neighbor explains that his breath is getting shorter.

‘How’s he doing?’ she is heard asking. ‘Shallow breath, a lot of pain, he’s conscious we have him covered in blankets, his heads covered, he’ll be drifting off.’

‘Is he starting to kind of drift off into sleep?’ she asks, to which the neighbor responds ‘yeah.’

The audio makes it clear that the 52-year-old was in need of life-saving equipment and had been crying out in agony for over 15 minutes.

Renner was later airlifted to hospital from a private road blanketed in thick snow.

Footage shows the emergency helicopter taking off from the winter landscape and disappearing behind snow peaked mountains.

Renner’s condition has been described by sources close to the American actor as far more severe than had been previously been reported.

At the time, Renner’s representatives said he had suffered blunt chest trauma and orthopedic injuries and was in a critical but stable condition after surgery.

The actor is reportedly aware he has a long road to recovery ahead of him, with friends saying it could take up to two years before he is back in fighting shape.

Last week, the actor shared shared a photo of his physical therapy session.

He was seen in the photo with his hands folded over his stomach and his head tilted against the pillows of his hospital bed as a physical therapist bends his knee.

The star’s bed was positioned next to floor-to-ceiling windows, giving the Marvel actor a beautiful view to enjoy while he continues to recover.

On Saturday, the actor remained hopeful that the ’30 plus broken bones will mend, grow stronger, just like the love and bond with family and friends deepens.’