The Rees-MOB: Jacob Rees-Mogg shares snap of his five eldest children on morning of their first day back at school after six-month Covid break

By Sebastian Shakespeare for the Daily Mail

Jacob Rees-Mogg has shared a family photograph of his five eldest children in uniform on the morning of their first day back at their £18,000-a-year school.

The Leader of the House of Commons’s children Peter, 12, Mary, 11, Thomas, ten, Anselm, eight, and Alfred, four, posed on the steps of their home yesterday.

Four of the brothers and sisters were returning to Prince Charles’s alma mater Hill House, where fees range between £14,400 for infants to £18,000 for sixth formers.

And it was the first day at the school in London’s Knightsbridge for Alfred, while the youngest brother, Sixtus, three, remains at the family home for now.

Tweeting a photograph of his brood yesterday, Mr Rees-Mogg said: ‘The holidays are over and my five older children certainly need, and want, to be at school.’

Hill House, which was founded in Switzerland in July 1949, has 900 pupils who wear its distinctive uniform of burgundy breeches and mustard-coloured tops.

Charles started attending the school in London in 1956, with the Queen, Prince Philip and Princess Anne all going to its sports day the following year. 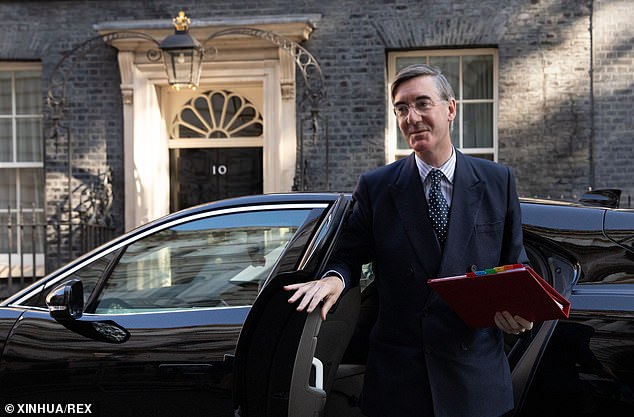 Leader of the House of Commons, Jacob Rees-Mogg, arrives at Downing Street yesterday