Whenever there’s a session of International Trade questions, the chamber takes on a whisky sour flavour.

Getting through the whole hour usually requires popping a couple of antacids down the gullet.

The reasons for this bitter atmosphere are twofold.

The first is that opposition MPs spend most of their time goading the Government’s post-Brexit trade prospects.

Despite protestations otherwise, their gums salivate at the idea it’ll all end in disaster. The second reason is that the Secretary of State for International Trade is Liz Truss.

Liz Truss, pictured today, is regarded as a ‘lightweight’ by opponents and is ‘not the Commons’ nimblest performer,’ writes Henry Deedes

Opponents sneer at Truss, you see.

They regard her as lightweight. A flaky figure of fun who can’t do the work and all that.

Now it’s true that the Truss is not the Commons’ nimblest performer.

Her delivery can be wooden, clumsy even. She has a habit of over-articulating her words, as though addressing a doddery uncle.

Yet she seems a capable enough minister whenever I watch her.

Yesterday she faced the usual barrage of hysteria over chlorinated chicken, tariffs, border controls and the like.

The loudest mooing though concerned the Government’s proposal to appoint former Aussie prime minister Tony Abbott to the Board of Trade.

Mr Abbott, for those just emerging from quarantine, has previously expressed a number views on women and homosexuals many now regard as unfashionable.

What riled Labour’s benches most was Abbott’s sceptical attitude toward global warming. Christian Matheson (Lab, City of Chester) denounced him as a ‘climate change denier’.

He said that word ‘denier’ as though he’d just bitten a chunk out of a rancid Granny Smith.

Last time I looked, harbouring doubts about climate change is not a crime.

But judging by the indignant noises emerging from Matheson’s colleagues, Mr Abbott might as well be a convicted puppy trafficker.

Truss accused Labour of being ‘intolerant of anyone who does not agree with them’.

She observed how she never heard them cause any stink when ex- shadow chancellor John McDonnell once suggested they ‘lynch’ her colleague Esther McVey.

While Truss’s deputy, Greg Hands, preferred to tell MPs that they were simply lucky to have an ex-prime minister working for them, his boss was clearly in the mood to give the Opposition a biff. 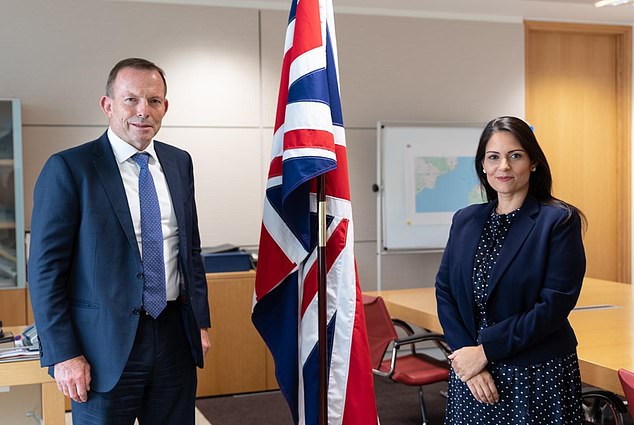 Former Australian Prime Minister Tony Abbott, pictured with Priti Patel, has been appointed to the Board of Trade, despite previously expressing a number views on women and homosexuals many now regard as unfashionable

When Ruth Cadbury (Lab, Brentford and Isleworth) referred to Abbott’s supposed misogyny off she went again.

Truss accused Labour of ‘absolute hypocrisy’ by preferring to ‘virtue-signal and indulge in tokenism than take real action to improve the lives of women’.

After all, how many female prime ministers had they appointed?

This earned a gentle rebuke from Sir Lindsay Hoyle, who requested she stick to talking about international trade.

No matter. Truss was just happy to have got her point down on record.

There followed some welcome light relief with the usual merry-go-round of members touting their constituency’s wares. 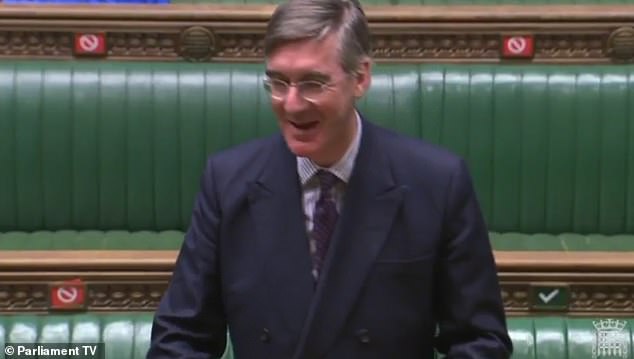 His constituency is home to Whitby Morrison, a ‘world leader’ in Mr Whippy vans, apparently.

Never let it be said you don’t learn something from these sessions.

The Mogg has proved a doughty flak jacket to the Prime Minister since entering Downing Street.

Though he may have been over-egging things a tad when he opined that it was ‘hard to imagine a better-functioning, more forward-thinking government than we have now’.

So too when he described Education Secretary Gavin Williamson as an ‘A* individual and an A* secretary of state.

Not on estimated grades but on facts’.

Certainly Jacob deserves an A* for loyalty.