Bond aficionados will know that early in each story comes an inaugural meeting between hero and foe. A chance encounter over highballs, perhaps, or a high-stakes hand of chemin de fer.

The tone is formal yet courteous. Compliments might even be exchanged. Yet beneath this faux chumminess lingers a whiff of menace.

There was a slight flavour of this to Boris Johnson’s first encounter with Sir Keir Starmer at PMQs yesterday.

Boris Johnson faced off against Sir Keir Starmer during Prime Minister’s Questions for the first time on Wednesday, with the Commons still mostly empty as MPs work from home It was less a head-to-head confrontation than a peek into the milky whites of each other’s eyes. Boris was cautious and respectful. Sir Keir? Lawyerly, yes, but also polite. Self-assured, as you would expect from all those years in a courtroom, but really nothing spectacular.

There were no shouts, no zingers, no yah-boos across the despatch box. The atmosphere was so quiet you could have heard a snail cough.

My card says Starmer just about shaded it (if it’s appropriate to score these bouts at the moment).

Before the off, the Labour leader sat alone, displaying rather less zen-like calm than he had the week before against stand-in Dominic Raab.

Grasping a water bottle, his hands quivered. Boris, late into the chamber, was his usual shambolic mass of crumpled suiting and flailing limbs.

A comb – or possibly a garden rake – had at least finally been dragged through that ragged thatch of his.

Sir Keir rightly focused on the Government’s agonies – a poor record on testing, a failure to provide adequate protective gear for NHS staff, a confused lockdown/exit strategy… His most barbed query came over the terrifyingly high death toll – more than 30,000 to date. 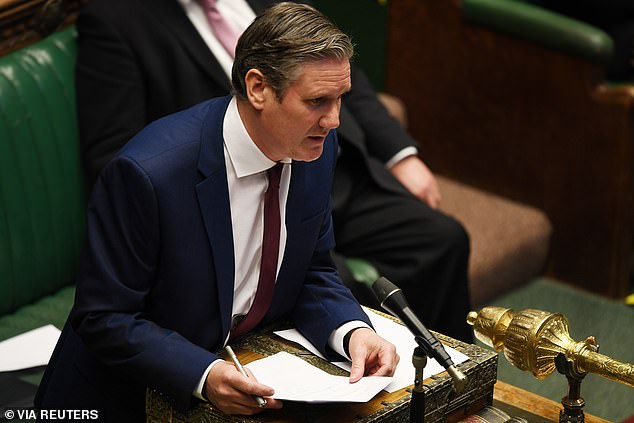 ‘How on Earth did it come to this?’ he asked, a question uttered more in sorrow than in anger.

The solemn atmosphere of the House at the moment suits Starmer more than Boris.

The PM prefers an audience, the roar of approval from his own posse.

To give Johnson his due, rather than brushing aside difficult queries as is his wont, he gave his opponent’s questions the serious responses they deserved.

Further down the bench from Boris was Matthew Hancock, feeding the PM lines like a furtive egghead helping out a fellow pupil during a Latin test.

At one point, when Boris pledged to test 200,000 people a day by the end of the month, the Health Secretary grimaced slightly.

It’s quite possible the boss was making policy up on the hoof. T he most significant moment came at the end of Starmer’s questioning, when the Prime Minister all but confirmed he would be announcing an easing of the lockdown this Sunday.

Gurgles of dissatisfaction emanated from the opposition benches. Speaker Sir Lindsay Hoyle grumpily interrupted to say he preferred plans to be unveiled in the House first. Boris mumbled a few excuses.

The truth is he’s got a much better chance of people actually watching his announcement if he makes it on a Sunday night.

Joining via video was the SNP’s Ian Blackford, who has dispensed with the Hibernian FC-themed backdrop to which we’ve become accustomed.

Too much abuse from rival ‘fitba’ fans, possibly.

His colleague Mhairi Black (Paisley and Renfrewshire South) appeared in front of her impressive collection of guitars. She’s got lovely vintage one which looks like the sort of thing skiffle crooner Lonnie Donegan used to play.

Justin Madders (Lab, Ellesmere Port and Neston) got a ticking off from the Speaker for appearing in front of a 1920s Labour campaign poster. ‘No political slogans!’ he admonished.

Having looked bamboozled by the new gadgetry to start with, Sir Lindsay is now starting to enjoy himself. He gets particular pleasure cutting off any member who’s being a bore.

Home Office minister Victoria Atkins was rambling on yesterday when – zoink! – she was cast off into technological Siberia.  Poor Vicky. But it was no less than she deserved.

At the end, Boris trudged off deep in conversation with Hancock.

Not without justification, he’ll have been relieved to have got that first appearance back in the Commons out of the way.

Now let’s see what he has to say on Sunday.