Rarely do tributes between political opponents extend beyond leaden platitudes.

Watching the hitherto emotionally impregnable Brown, whose own daughter died as a baby, shattered with grief and express sympathy for his rival was a moment of heartbreaking tenderness.

Sir Keir Starmer’s message to the Prime Minister yesterday, hours after the PM’s partner Carrie delivered a baby, now ranks right up there.

Witnessing such thoughtfulness and unexpected decency first hand made you wonder if there might just be hope for our wretched political class yet.

We anticipated nothing more than a Hallmark card message of congratulation, a standard ‘all the best, PM’ and no more. After all, he had once again been robbed of his first PMQs bout with the Prime Minister.

Yet cupping his hands in the style of a parachuting crab, Sir Keir pronounced the arrival ‘wonderful news’.

He added: ‘Whatever differences we have in this House, as human beings I think we all recognise the anxiety that the Prime Minister and Carrie must have gone through in these past few weeks – unimaginable anxiety. I really hope that this brings them incredible relief and joy.’

Rumbles of agreement echoed around the near empty chamber. Up in the deserted Press Gallery even a neighbouring scribe, no soggy liberal he, went a tad gooey.

After such a lovely opening it would have been nice to declare this a golden session.

But after his star debut, Sir Keir babbled on far too long this week. Questions were issued like vast tracts, punctured with legal sub clauses and endless footnotes.

Nearly 25 minutes into what was supposed to be a half hour session and he was still asking his questions.

Were this a cricket match, Speaker Sir Lindsay Hoyle would have fined him half his match fee.

Raab fared slightly better than last week. He’d got some of his facts and figures under his belt.

He was on spikier form too, smarting, perhaps, from the schooling Starmer gave him the week before.

He got particularly riled when Sir Keir pressed him about easing the lockdown, which the Government says it will only address under the advisement Sage.

‘If he knows better than Sage then perhaps he should explain it!’ Raab barked huffily.

With no more than 25 members or so in the chamber the atmosphere in these sessions is almost non-existent. I’ve attended livelier local planning authority meetings. 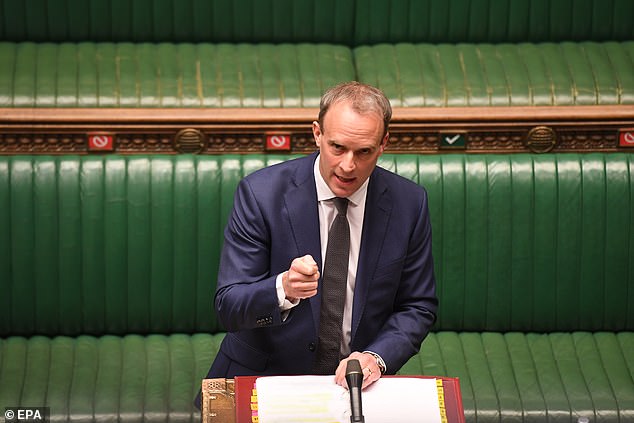 With Boris Johnson celebrating the birth of his newborn son, Foreign Secretary Dominic Raab stepped in to answer Prime Minister’s Questions on Wednesday

The only smattering of commotion occurred when SNP leader Ian Blackford arrived via the TV screens to repeat his demands that the Government extends its trade negotiations with Brussels.

Slumped in what appeared to be his conservatory, Blackford said the PM needed to ‘show some leadership’. Groans gurgled along the Government benches.

Apropos of the lockdown, the Government would do well to listen to its backbenchers. Two yesterday raised the issue of garden centres, which are currently closed.

Sir Desmond Swayne (Con, New Forest W) wanted them reopened immediately. Mark Pritchard (Con, The Wrekin) demanded assurances they would at least be allowed to resume trading as soon as the lockdown was relaxed. Raab was non-committal.

Just get them open I say.

Remarkably, no technical issues this week. We finally got to hear from ex-Scottish secretary David Blundell whose chance to enter the history books last week as the first MP to table a question at PMQs via videolink bombed when his connection failed.

‘Nice to be finally out of the Zoom waiting room,’ he chortled.

As the session ended, Jeremy Corbyn, still lingering on the backbenches like a stale lentil stew, gave his successor a single thumbs up. Not sure Sir Keir needs Jezza’s approval, but for the Labour leader’s warm words toward the PM I’d have given him two.