Ketchup’s coming home! Heinz forks out £140m to make sauce in UK again after 20 years of production in the Netherlands

You may not know it, but for the last 20 years, the Heinz ketchup that we squeeze over burgers, bangers and bacon has come from a factory in the Netherlands.

The Dutch operation followed a controversial move that ended some 80 years of production in this country.

But in a huge boost for post-Brexit Britain, the red sauce is coming home. Kraft Heinz will also return to making salad cream and mayonnaise here.

The US food giant is investing £140million in its plant near Wigan for the move it called a ‘strong vote of confidence’ in the UK.

It said the shift also aligns with Boris Johnson’s ‘levelling-up agenda’ by making a significant investment in the North West.

The announcement was welcomed by ministers and union leaders as tremendous news for the region and for the workers who have made the vast Kraft Heinz plant at Kitt Green a success.

In a huge boost for post-Brexit Britain, Ketchup is coming home after 20 years being produced in the Netherlands. Kraft Heinz will also return to making salad cream and mayonnaise here.

The investment is the biggest by the company in over 20 years at a site outside the US and could create 50 full-time jobs.

Kitt Green currently produces 1.3billion cans of food per year, of which 94 per cent is consumed here, including beans, soups and pasta.

The firm said bringing back sauce making later this year was ‘designed to meet the demand from a new generation of UK consumers’.

The plant’s site director, Luis Spinardi, said: ‘Not only are we excited to be expanding our product mix by bringing sauces back to the UK but also look forward to a more efficient facility with a sustainable future.’ 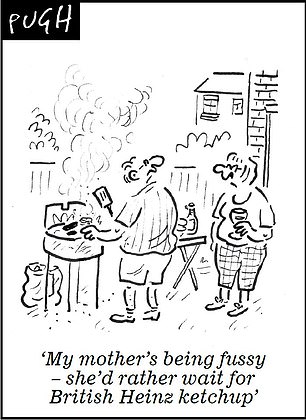 Minister for Investment Lord Grimstone, a former banker, said: ‘Whether you’re a Heinz mayonnaise or ketchup fan, the investment is a vote of confidence in the UK economy from a major US firm and a boost that will mean jobs and growth.

‘The US is a key trading partner and we are committed to striking an ambitious trade deal that opens up new opportunities for our businesses, brings in more investment and creates better jobs for people across the whole of the country.’

Joe Clarke, Unite union national official for food, drink and agriculture, said: ‘This is tremendous news for the hard-working members at Kraft Heinz.

It reflects the exceptional co-operative working that has been built upon over many years, especially over the past 12 months with everybody pulling together through Covid, keeping the nation fed throughout the pandemic.’