Theoneste Bagosora, the Rwandan military leader described as the ‘Heinrich Himmler of Rwanda’, has died in a prison in Mali where he was serving a sentence for masterminding the slaughter of 800,000 people during the 1994 genocide.

Bagosora, who died aged 80, was serving a 35-year sentence after being found guilty of being in charge of the troops and militia who butchered minority Tutsis and moderate Hutus in 100 days in 1994.

‘Theoneste Bagosora died in a hospital in Mali yesterday (Saturday) late morning,’ said Abubacarr Tambadou, registrar for the Mechanism for International Criminal Tribunals, which oversees prosecution of those responsible for the genocide.

Bagosora was jailed for life in 2008 for genocide, crimes against humanity and war crimes, though his sentence was reduced to 35 years on appeal in 2011. 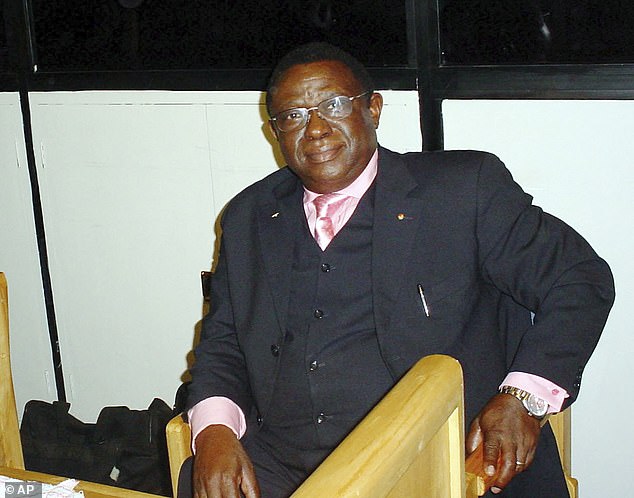 Bagosora died in prison where he was serving a 35-year sentence for masterminding the slaughter of 800,000 people during the 1994 genocide

Known as a hardliner within the National Republican Movement for Democracy and Development party of Rwandan President Juvenal Habyarimana, Bagosora in 1993 was appointed cabinet director in the defense ministry and took control of military and political affairs in the country.

Canadian General Romeo Dallaire, head of United Nations peacekeepers in Rwanda at the time, described Bagosora as the ‘kingpin’ behind the genocide.

Once a close ally of then President Juvenal Habyarimana – they both came from the same northwestern province of Gisenyi – he later reportedly held a grudge after being passed over for promotion to general. 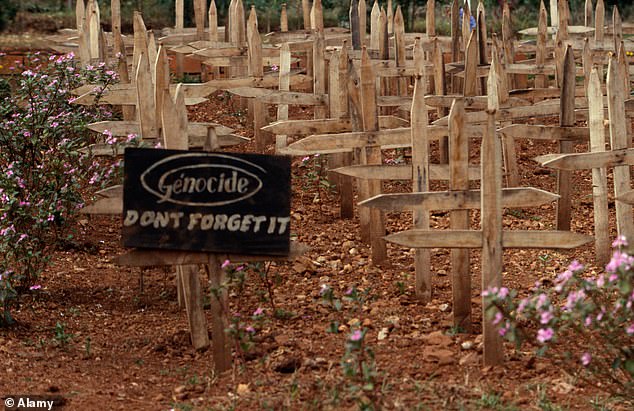 The majority of Rwandans are ethic Hutus, but the country was ruled by the Tutsi minority for decades until 1959 when the Tutsi monarchy was overthrown.

In 1990, a Tutsi rebel group called the Rwandan Patriotic Front that had formed in Uganda invaded the country.

After several years of guerrilla fighting, a peace deal was signed in 1993 between President Juvénal Habyarimana and RPF leaders.

However, the fragile peace lasted only until the night of April 6, 1994, when a plane carrying Habyarimana and Cyprien Ntaryamira, president of Burundi and a Hutu, was shot down.

The Hutus blamed the RPF for the attack and enacted a ‘final solution’ to rid the country of Tutsis, with militias handed lists of names and told to kill them.

Neighbours turned on each other, husbands murdered their Tutsi wives, and there were even accounts of priests and nuns killing those who sought shelter in churches.

It lasted 100 days and 800,000 Tutsis were killed, alongside thousands of Hutu moderates who objected to the killing.

They were slaughtered by supporters of the Hutu government, who claimed to be ‘weeding out the cockroaches’.

Men, women and children were felled by machetes, grenades and bullets in their homes and on the streets

By July 15, almost 800,000 people had been killed – a massacre which only stopped when the RPF took control of the capital, causing some 2million Hutus who perpetrated the genocide or feared reprisal attacks to flee.

The killings only stopped when the Tutsi-controlled Rwandan Patriotic Front seized control, and put Paul Kagame into power.

The international community, and the UN, were criticised for failing to act, despite warnings from inside the country that genocide was taking place.

French military intelligence concluded Bagasora was one of the prime sponsors behind the April 6 assassination of both President Habyarimana and his Burundian counterpart Cyprien Ntaryamira – both Hutus – as well as the Rwandan army chief of staff.

Their Falcon plane was shot down when preparing to land in the Rwandan capital Kigali, an event many blamed on Tutsi rebels and which triggered the massacres.

‘The assassination of moderate opposition ministers and Tutsis less than half an hour after the explosion of the presidential Falcon would confirm the high degree of preparation of this operation,’ according to the intelligence memo from September 1994, revealed in 2019.

A few days later, the foreign minister and Hutu moderate was killed by soldiers. Bagasora and Boniface Ngurinzira had clashed constantly during 1993 peace talks in Tanzania.

Bagasora accused Ngurinzira of making too many concessions to the rebels and, on his return to Rwanda, reportedly said he was heading home ‘to prepare the Apocalypse’ – something he denied in court hearings.

Bagasora denied any direct role in the genocide, though he was seen as part of a Hutu extremist faction in the country.

After the genocide, Bagosora fled into exile in Cameroon. He was arrested there in 1996 and flown to face trial in Arusha, Tanzania in 1997. His trial began in 2002 and lasted until 2007.

Bagosora was found guilty in connection with the killing of 10 Belgian peacekeepers and responsible for the deaths of the Rwandan prime minister and head of the constitutional court. He was also found responsible for organized killings of Tutsi at numerous sites in Rwanda’s capital, Kigali, and in Gisenyi in the west of the country.

The appeal court in 2011 found that while there was no evidence he ordered the massacres, Bagasora knew they were planned and did nothing to stop them, even though he was in a position to do so.

Reacting to the news of Bagosora’s death, Rwanda’s ambassador to the Netherlands, Olivier Nduhungirehe, said Bagosora didn’t show remorse for his crimes.

‘The main reasons against Bagosora’s request for early release were that he never accepted responsibility for genocide, showing no sign of remorse or regret; and that he is a man with a forceful personality who at times is unable to control himself,’ Nduhungirehe said in a Twitter post.

Bagosora was serving his sentence in Koulikoro prison in Mali, but had been transferred to a clinic in the capital Bamako, an official in the Malian prison administration said.

An official at the institution where he was admitted said he died of ‘heart failure’, without giving further details.

Bagosora had in April been refused an application for early release because of the ‘extremely high gravity (of his) crimes’, with the judge ruling that he had failed to demonstrate rehabilitation.