Heathrow is to offer passengers £80 pre-departure Covid tests to help get the struggling flight industry off the ground.

The news came as it was also revealed that the UK’s post-travel quarantine time could be halved to seven days by December 1.

New facilities in Terminals 2 and 5 will offer swab tests to travellers flying to countries that require evidence of a negative test – with results available in 20 minutes.

Heathrow already has a testing hall for inbound travellers.

Although many countries have adopted pre-take-off tests, Whitehall is putting more emphasis on establishing a ‘test-and-release’ model in which the quarantine time is halved with a single test seven days after arrival.

This has been rejected by some aviation leaders, including new BA chief Sean Doyle, who fear any quarantine will stifle the economy.

Virgin Atlantic boss Shai Weiss said: ‘We urgently need a passenger testing regime in the UK to safely replace quarantine. As long as the 14-day quarantine remains, demand for travel will not return.’

He said: ‘We’re talking to the US homeland security and others. We’d like to get trials set up.

The new testing halls at Heathrow have been set up by aviation firms Collinson and Swissport and are backed by British Airways, Virgin Atlantic and Cathay Pacific.

Although Heathrow has already set up a testing hall for inbound travellers, these will be the first to provide pre-departure tests.

Italy and Hong Kong are among a growing number of places which require arrivals to present a negative test certificate either before take-off or soon after landing. 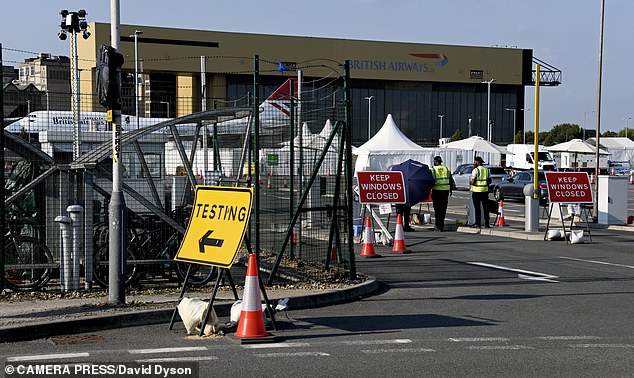 New facilities in Terminals 2 and 5 will offer swab tests to travellers flying to countries that require evidence of a negative test – with results available in 20 minutes. Heathrow already has a testing hall for inbound travellers

Warning that Britain is ‘on the brink of an economic emergency,’ Heathrow boss John Holland-Kaye said: ‘Many other countries are already using testing to keep their borders safe while restarting trade and travel.

‘These facilities will make it easier for passengers going to those countries to get a test and have the potential to provide a service for arriving passengers.

‘Ultimately, we need a Common International Standard for pre-departure testing, and we welcome the UK government’s recent announcement that it wants to take a global lead in establishing this.

‘We will work with them to make this happen as soon as possible, so that we protect livelihoods as well as lives.’