Passengers travelling from Heathrow can pre-order booze to pick up and drink before take-off, it emerged today.

It comes after jokesters claimed to buy a £9.99 ticket for a flight they ‘had no intention of getting on’ to get themselves into an airport bar for pints as England was plunged into Lockdown 2 on Thursday.

Gary Lee Dasilva, from Cambridge, tweeted: ‘When the pubs are closed and the only place serving is the airport, so you book a £9.99 flight (that you have no intention of getting on) to go for beers with the lads, down there for dancing.’

It is thought the prankster’s meme was misleading after a MailOnline probe discovered most airport bars have closed. 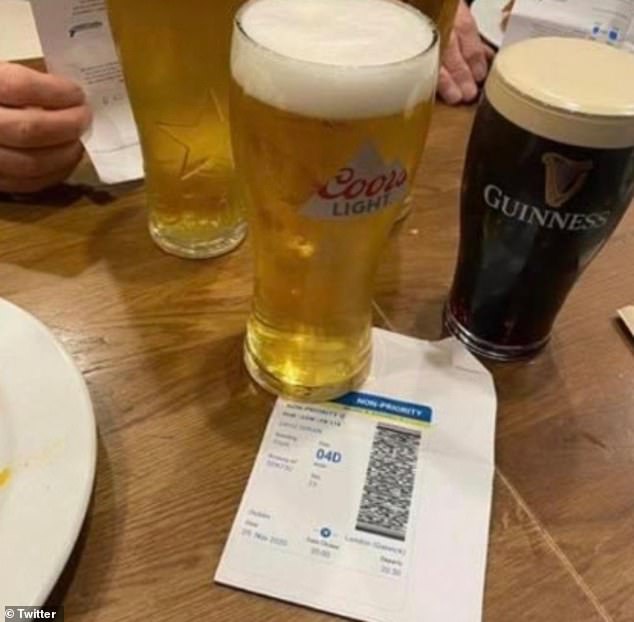 It comes after jokesters claimed to buy a £9.99 ticket for a flight they ‘had no intention of getting on’ to get themselves into an airport bar for pints as England was plunged into Lockdown 2 on Thursday

Of the seven English airports contacted by MailOnline, alcohol could only be purchased from the Caviar House & Prunier Seafood Bar at Heathrow.

The restaurant is following the Government’s lockdown guidance, meaning hopeful drinkers will have to order ahead and collect their drinks when they get past airport security.

They can then take their food and drinks to the departure lounge where seating is open as usual.

Addison James Morgan added: ‘People booking £9.99 flights just so they can go to the airport and have beers with the lads.’

A Heathrow spokesperson said: ‘The small number of essential retailers and food and beverage outlets that remain open at Heathrow are permitted by the regulation and operating within Government guidelines. 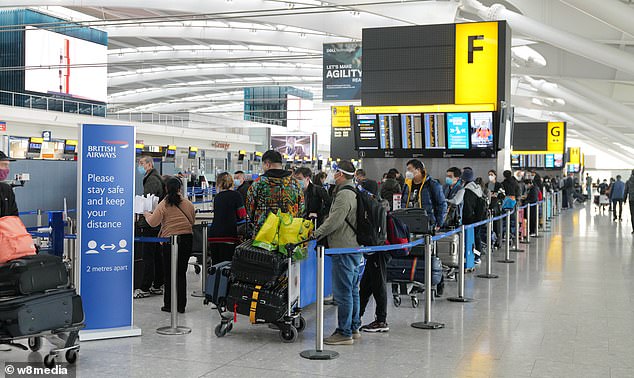 Heathrow was teaming with people earlier this week as they headed out of the country ahead of the second lockdown. Pictured, terminal 5

‘The current lockdown has seen all other non-essential outlets close. For those passengers having to undergo essential travel during this time, takeaway food and drink (including alcohol) is available for passengers to pre-order and collect outside the outlet’s premises, in line with the guidelines.

‘Any alcohol purchased from duty-free retailers cannot be consumed at the airport and will be placed into a sealed bag, as is always the case.’

Other airports in England have kept only their essential premises open. Gatwick has Pret a Manger, Boots, WHSmith and Costa Coffee.

At Stansted a ‘couple of cafes’ are open, along with Boots and WHSmiths, according to a spokesman.

Luton only has vending machines while in Manchester there is a Costa, Pret, Caffe Nero, Greggs and Pork & Pickle (deli) as takeaway only.

England was plunged into a second lockdown on Thursday in an effort to curb the spread of coronavirus this winter.

All pubs, restaurants and non-essential businesses have been forced to shutter – with only click and collect or takeaway services allowed.

Meanwhile, top experts have fumed  No10 only hit the lockdown panic button because it was backed into a corner by its ‘gloomster’ scientific advisers who don’t want to deal with the same scrutiny that was hurled their way during the first wave.

And today it emerged an official prediction that coronavirus deaths would soon surpass those registered in the first wave was quietly corrected by the Government because it was too high. The projections were used to push the UK nation into a second lockdown.

Prime Minister Boris Johnson said the draconian measures – which came into force from midnight Thursday morning until December 2 – were the only way to avert bleak Sage predictions of 85,000 deaths this winter, far above the previous ‘reasonable worst case’, and the NHS being swamped before Christmas.

He said otherwise doctors would have to choose between saving Covid sufferers and those with other illnesses.

‘No responsible PM can ignore the message of those figures,’ Mr Johnson said. ‘We’ve got to be humble in the face of nature.’

Mr Johnson pointed out that the action was not the same as March as key sectors of the economy are under orders to stay open, but said he was ‘under no illusions’ about how tough it would be.

He declared that the furlough scheme would be extended for the period, rather than ending as originally planned. That could add another £7billion to the Treasury’s spiralling debt mountain.

Mr Johnson also refused to rule out extending the measures beyond the proposed end date. Asked if the time would be enough, the premier said: ‘I hope so. We have every reason to believe it will be. But we will be driven by the science.’