A bride has shared a touching video that documented the emotional moment she was walked down the aisle by her little brother in place of her father who is a quadriplegic – a person affected by paralysis of all four limbs.

In the heartwarming clip, Nicole Kopsidas, a 27-year-old from Maryland, was walked down the aisle on her wedding day by her brother, Matthew, due to her father’s illness, but she insisted the moment was so ’emotional and special’ as her father sat in his wheelchair at the end of the aisle.

In an interview with Insider, the bride opened up about the touching moment as social media users struggled to hold back their tears over the emotional start to her wedding ceremony.

‘I knew it was going to be emotional and so special,’ she said.

‘There wasn’t a dry eye in the house. It was really special, and my dad was really happy that we did it that way because he got to see everyone in the room.’

Ohioan Nicole Kopsidas, 27, shared the emotional moment she was walked down the aisle by her little brother in place of her father who is quadriplegic 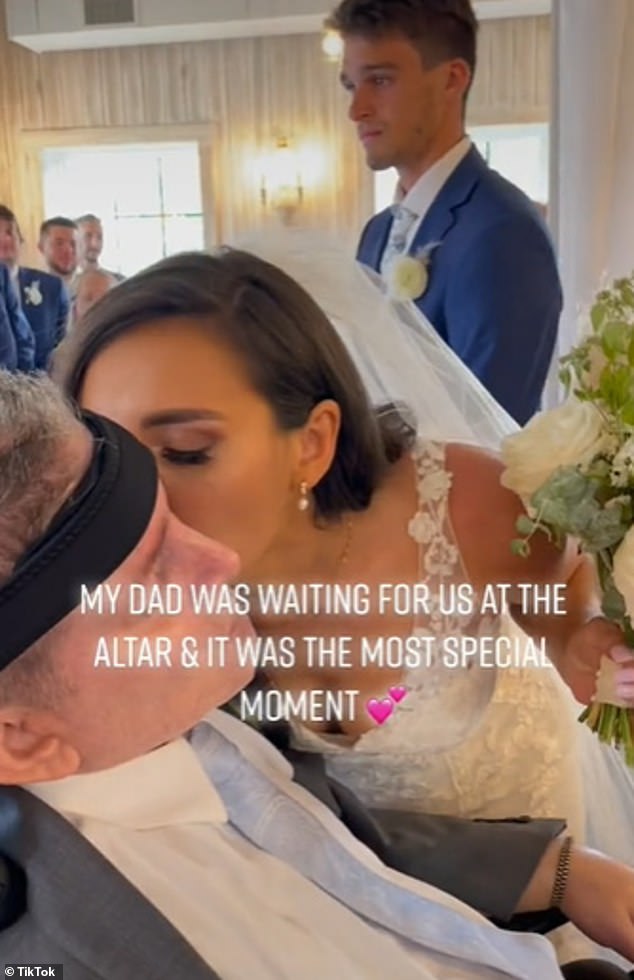 In the heartwarming clip, Nicole’s brother accompanied her while her father waited at the altar – making the moment so ’emotional and special’ 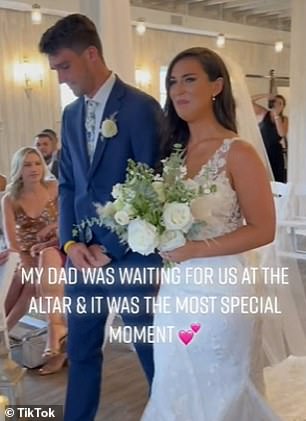 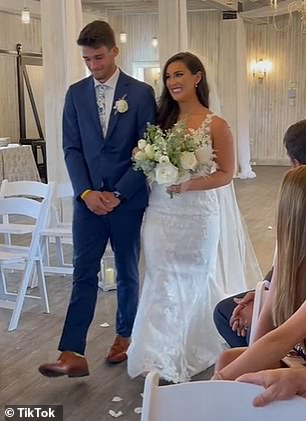 Their father waited at the altar as tears formed in his eyes. Once his children approached him, Nicole leaned down and gave her father a kiss on the cheek

The tragic disease: What is Multiple Sclerosis?

It is an incurable, lifelong condition.

MS affects 2.3 million people worldwide – including around one million in the US

Nicole noted that her father was diagnosed with multiple sclerosis when she was just 2 years old and as she got older the condition worsened.

According to the National MS Society, multiple sclerosis is a disease that impacts the brain, spinal cord and optic nerves.

For the past eight years of the bride’s life, her father has lived as a quadriplegic,  and has relied on his parents and children for care.

‘My parents divorced before my dad got sick, but my mom, siblings, and I help out weekly to make sure he is well taken care of,’ she told Insider.

After Nicole and her husband got engaged, she began to wonder how her father would escort her down the aisle, despite being confined to a wheelchair.

Nicole noted that her main priority was keeping her father comfortable throughout her special day and that he was the one who suggested he watch his daughter walk down the aisle alongside his son.

Speaking about Matthew, she said: ‘He’s always been the baby of the family, so it was really special.

‘He was honored and excited, but probably a little bit sad because my dad couldn’t walk me down.

‘I feel like he knew I was going to ask him, so he was happy to be able to do it for our family,’ she added.

Prior to the ceremony, Nicole said she shared a ‘first look’ with her dad, which was extremely heartfelt and special for the both of them. 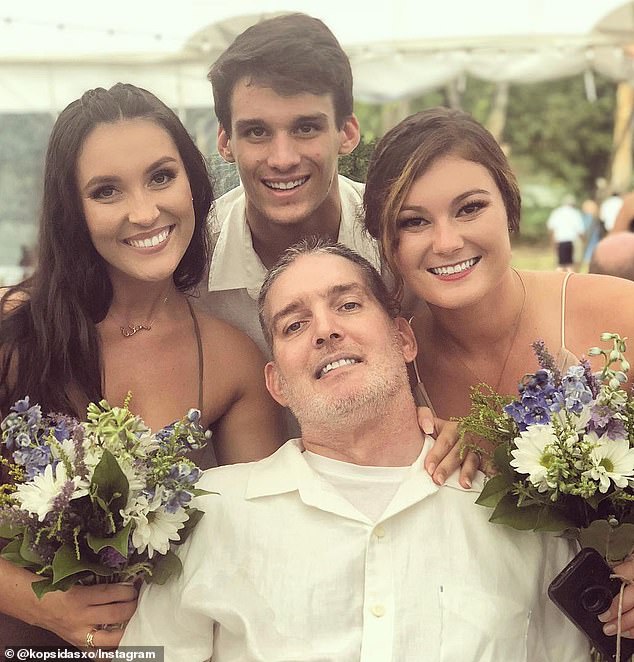 In an interview with Insider , the 27-year-old opened up about the touching moment as social media users struggled top hold back their tears (Nicole and her family pictured in 2018) 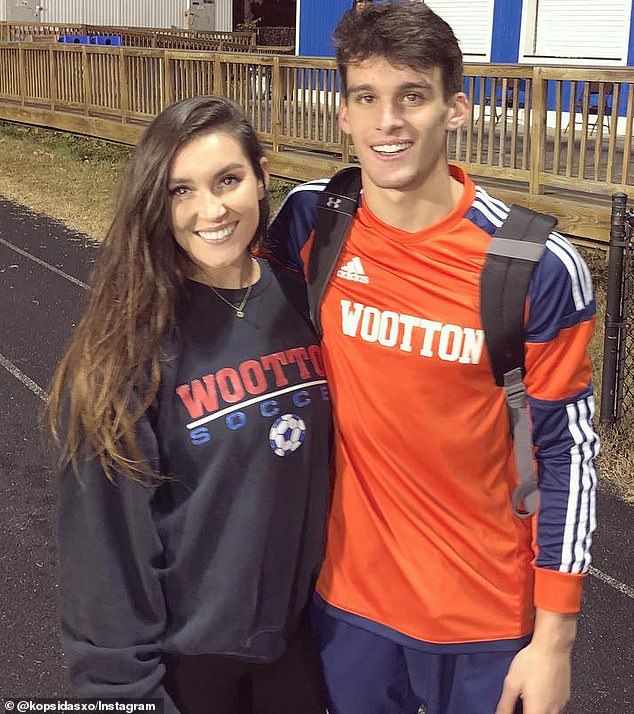 Nicole (pictured with her brother, Matthew, in 2018) said: ‘He was honored and excited, but probably a little bit sad because my dad couldn’t walk me down’ 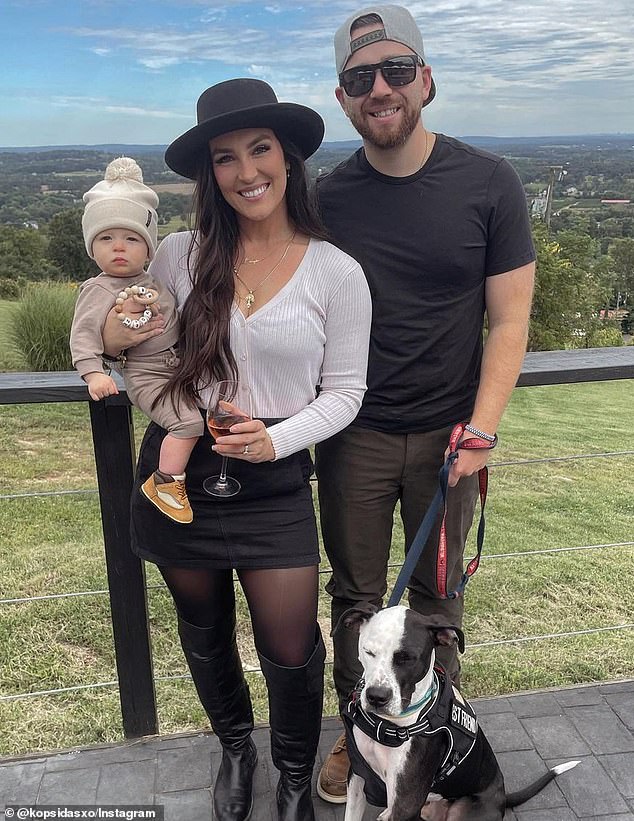 Nicole knew her family would cherish the viral video, but she never thought it would capture the hearts of so many strangers

After that moment with her dad, it was time for Nicole to be accompanied by her younger brother down the aisle.

The emotional video, recorded by Nicole’s mom and viewed more than 14.5 million times on social media, showed the stunning bride alongside her younger brother, who was holding back tears.

Their father waited at the altar as tears formed in his eyes, once his children approached him, Nicole leaned down and gave her dad a kiss on the cheek.

She said: ‘My dad was waiting for us at the altar and it was the most special moment,’ before adding it was ‘a moment’ she’d ‘never forget.’

She emphasized that she was grateful her father was able to be at her wedding that day, adding that they ‘cried a lot.’

‘I’m his oldest, and we didn’t know whether he was going to be able to make it to my wedding day, so we both cried a lot,’ Nicole said.

As for the viral video, Nicole knew her family would cherish it, but she never thought it would capture the hearts of so many strangers.

‘I knew that I would get a lot of attention from our family and friends because it is really special, and everyone loves my dad and has supported him, but I didn’t think it would be seen by millions,’ she added.

Social media users flooded her comments section and shared their emotional reactions to the video.

Another user added: “Aw how cute.’

‘Aw such a beautiful moment,’ one user added.

One user wrote: ‘This had me in tears!’