Here is the heart-stopping moment a snowboarder gets caught in an avalanche on a Utah mountain, but manages to stay on top of the cascading snow and survive unscathed.

Blake Nielson was cruising down Big Cottonwood Canyon near Salt Lake City on Sunday when the avalanche began, and he captured the whole incident on a camera mounted to the front of his helmet.

The film showed the ground suddenly falling away from Nielson, who then struggled to stay on the surface using ‘swimming motions’ in the shifting snow. He finally managed to escape the slide after about 300 feet of downward motion.

Nielson said in a Utah Avalanche Center report that he thought the avalanche was caused by a gust of wind which broke away a large slab of snow he was cruising over. 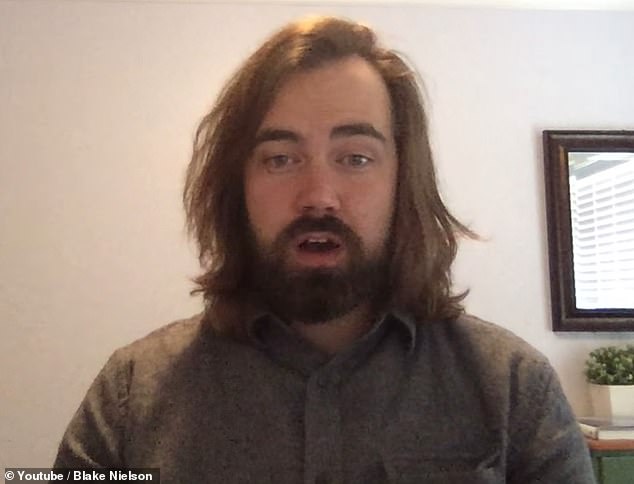 Snowboarder Blake Nielson survived the avalanche on Sunday in Utah

In the clip, Nielson could be seen beginning his descent into the snow bowl, and calmly carving his way down for a few turns.

After one final turn, the snow beneath his board suddenly began to break up and slide away around him in large sheets.

After sliding fast with the avalanche for a few moments, he managed stay on top of the torrent of snow and let his partner know by yelling ‘I’m staying on top, but I am sliding.’ 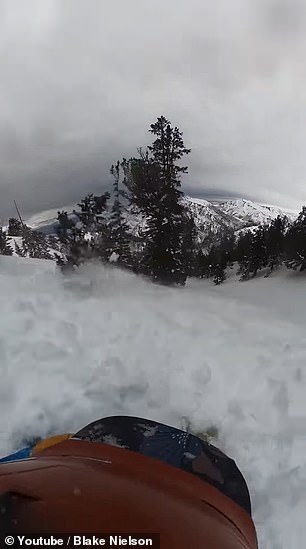 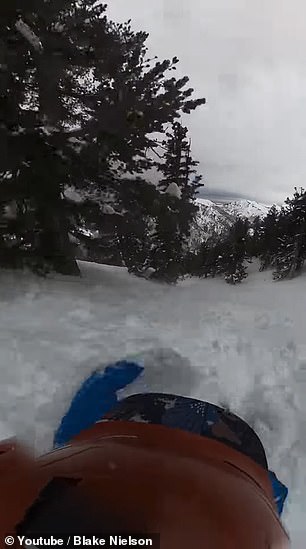 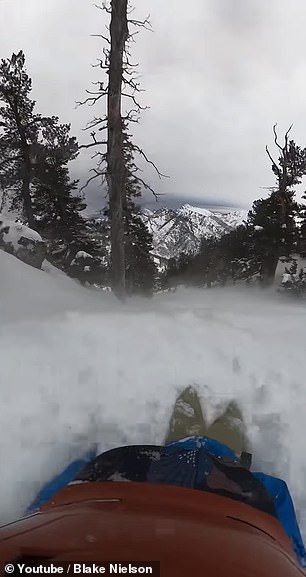 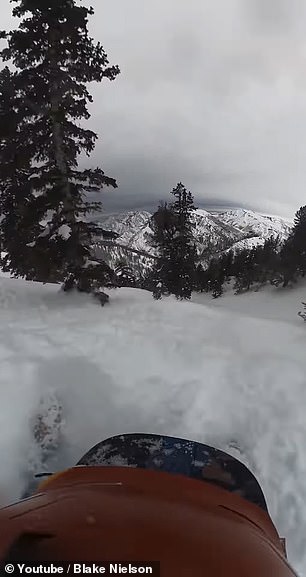 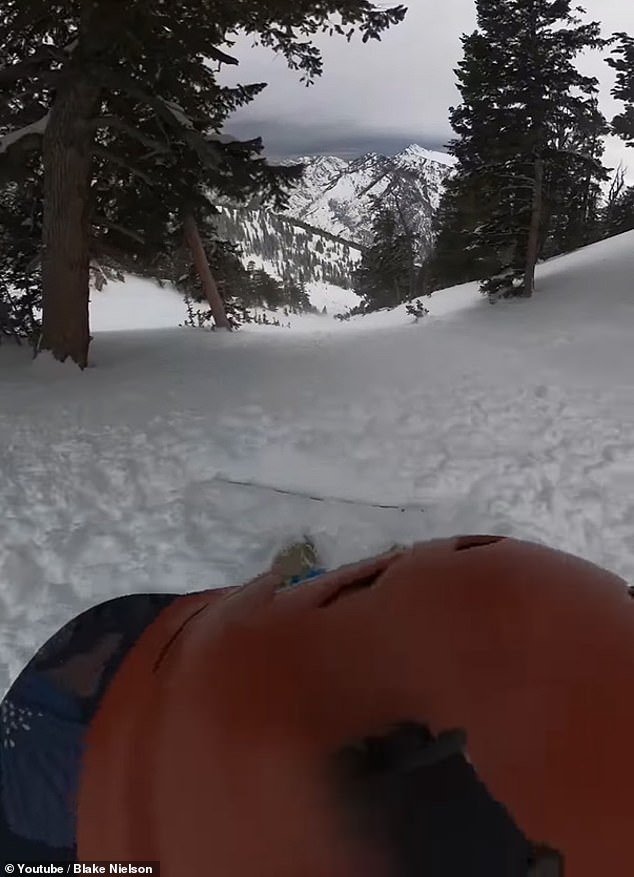 Nielson finally was able to come to a stop, but he said the avalanche continued down the mountain for about 1,300 feet before it finally ceased.

‘I was able to keep the majority of my body above the snow and was able to radio my partner that I was sliding with the debris,’ he said in his Utah Avalanche Center report.

‘An isolated wind slab broke loose below and above me which knocked me off my feet and took me for a ride,’ he added. 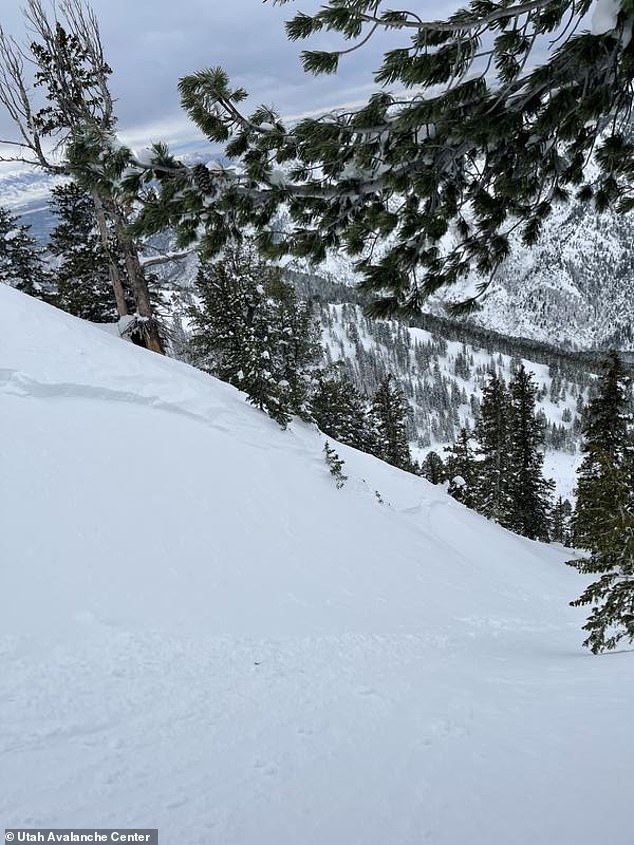 Nielson took these photos of the aftermath of the avalanche 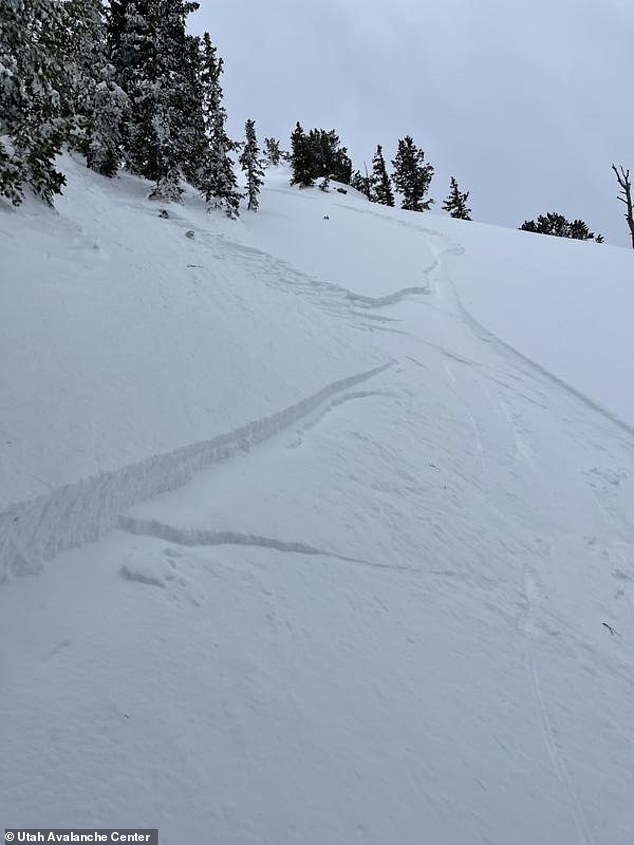 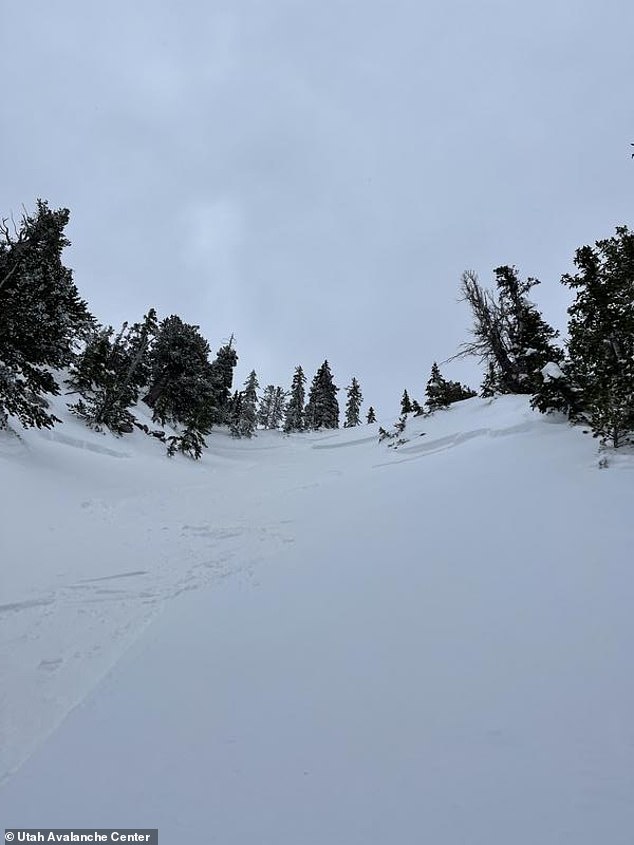 Looking up the mountains where the avalanche trapped Nielson

Nielson said he and his partner did extensive checks on the mountain to see whether or not the snow was stable enough for snowboarding.

He noted that during their check the snow seemed stable, but that they were wary of the winds coming over the mountain.

‘Respect the wind. Even a small “manageable” wind pocket can break and carry you a long way in steep terrain with long runouts,’ he cautioned in his report. 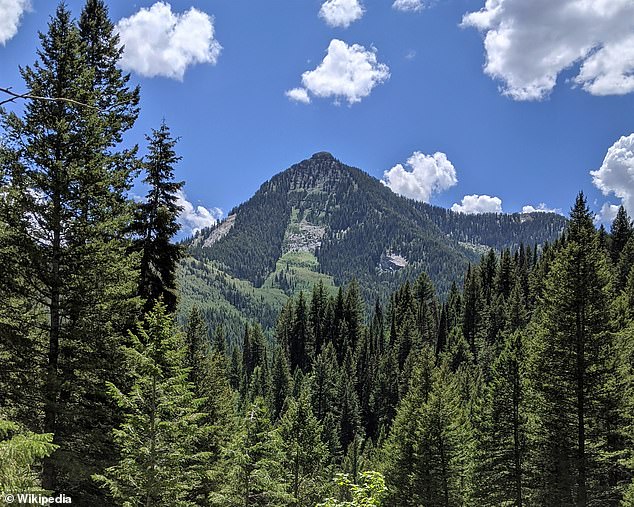 Kessler Peak, near Salt Lake City, where Nielson was caught in an avalanche

The Utah Avalanche Center said the last recorded death by avalanche in the state was in 2021.

A pair of skiers at a separate location near Salt Lake City were also swept away in an avalanche on Sunday, according to the New York Post. Neither of those athletes were hurt in the incident.

But in Colorado on Saturday, a pair snowmobilers were caught in an avalanche around Winter Park and died after being trapped beneath the snow.