This is the heart-stopping moment a cyclist rides out from behind stationary lorry and gets battered by oncoming van – but lands on his FEET.

The footage, taken on a dash camera, shows a young boy speeding between stationary traffic on a bike outside Oval tube station, London.

The van is waiting at lights near a very busy junction at Oval and the rider doesn’t appear to see a red van coming towards him as he goes to cycle across.

The front wheel of the bike collides with the side of the van sending it flying through the air.

Although the youth, who isn’t wearing a helmet, is sent spinning from the collision, he manages to remain on his feet after the accident.

The person inside the car which has taken the footage watches the crash and shouts ‘oh my god! A kid has just been hit by a car right in front of me! S**t the bed’. 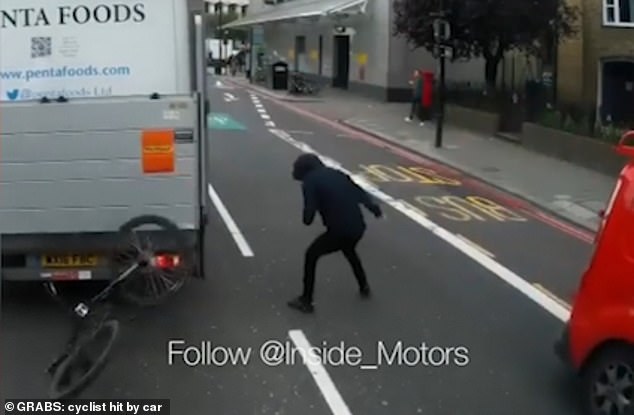 Although the youth battered by the car in the collision, he manages to remain on his feet after the accident 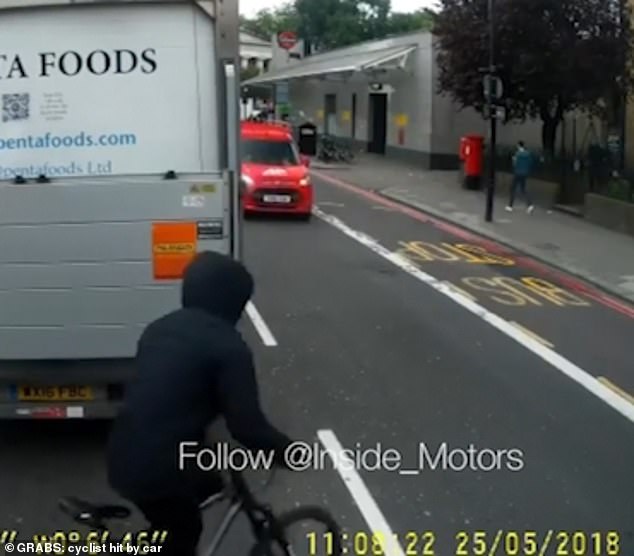 The boy, who is wearing a black puffer jacket and black trousers, cycles from behind a parked van without noticing the traffic on the other side

The boy, who is wearing a black puffer jacket and black trousers, picks up his bike before running across the road.

The video, taken just after 11am on May 25, 2018, has recently resurfaced on social media with users responding to the footage.

One user said: ‘Run away from responsibilities and actions, youth of today!’

Another commented: ‘Picked the bike up and ran away before he had to pay for a new window.’

A host of new cycle lanes have recently been created in London’s city centre, as borough-wide 20 mph speed limits were confirmed by Westminster Council.