Vaccine officials yesterday confirmed that doses will be offered within weeks to all 16 and 17-year-olds – and they will not need parental consent.

But Jonathan Van-Tam, the deputy chief medical officer, strongly hinted the programme could be extended to those aged 12 to 15. In a clear sign this could happen this year, he stressed the need to ‘continually review the emerging data’.

Children over 12 are eligible for the jab only if they have severe underlying health conditions or live with a vulnerable relative.

But Professor Van-Tam said it was ‘more likely, rather than less likely’ that the list of eligible 12 to 15-year-olds would grow.

At a Downing Street briefing, he said there was ‘no time to waste’ in starting the rollout to 1.5million 16 and 17-year-olds. ‘Children are going to start going back to colleges and sixth-forms from September, and in Scotland that will be slightly earlier, so there is no time to waste in getting on with this,’ he said.

‘Now we have the Joint Committee on Vaccination and Immunisation advice on starting that initial first dose in 16 and 17-year-olds, then I want us to proceed as fast as is practically possible.’

Although he said this rollout was unlikely to start next week, it is set to commence very soon, with the jab initially delivered via existing vaccine clinics, GP surgeries and pharmacies. The rollout could later be expanded and delivered at secondary schools.

It will be one dose initially, with the JCVI yet to make a decision on whether, or when, to give a second dose.

Although the NHS is soon to embark on a booster programme for some more elderly and vulnerable people, Professor Van-Tam insisted there was a ‘plentiful’ supply of vaccine. He added: ‘The NHS has been preparing for multiple options for very many weeks now and I would expect this programme will start in a very short number of weeks.’

The JCVI’s decision to recommend the jabs for 16 and 17-year-olds came less than three weeks after it stated that only under-18s with learning disabilities or chronic health conditions should be eligible for a vaccine.

That had followed concern over a rare side effect called myocarditis, a type of heart inflammation. 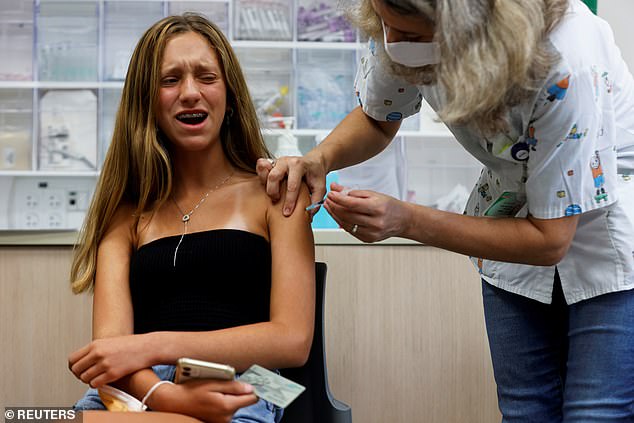 Pictured: A teenager reacts while receiving a dose of a vaccine against the coronavirus disease (COVID-19) at a Clalit healthcare maintenance organisation in Tel Aviv, Israel June 21, 2021

By Eleanor Harding, Education Editor for the Daily Mail

Pupils who refuse the Covid vaccine must not be treated differently, families have urged.

Parent campaigners UsforThem fear unvaccinated children could be split into different groups and separated from their friends as schools try to control the virus.

Some schools previously made pupils sit apart and banned them from PE if they refused to wear a mask, the group says. They fear another a two-tier system over vaccines, adding: ‘It’s not hard to imagine where this could lead.’

However head teachers’ union ASCL stressed last night that all pupils will be treated the same, as schools will not know which ones have been vaccinated. It is understood the Government will also insist unvaccinated pupils are not treated unfavourably. Molly Kingsley, co-founder of UsforThem, said: ‘While vaccination of children will in theory be voluntary, a number of measures rolled out over the last year have been voluntary in name only. We’re already seeing widespread peer pressure being applied to young people to take the vaccine.’

In France, where the vaccine is approved for those aged 12 and over, unjabbed children are already being treated unfavourably, she said. Last week a French minister said pupils who are not vaccinated will be sent home in the event of a Covid outbreak, while inoculated ones will be allowed to stay.

Now however, the committee believes it has ‘more certainty’ that the benefits of the vaccine outweigh the risks and that serious side effects are rare and mainly come after a second dose.

Universities minister Michelle Donelan yesterday denied the Government had piled pressure on the JCVI to reverse its policy. Downing Street also insisted it had not leant on the panel.

But, in private, ministers have made little secret of their frustration, especially because authorities in the US, France and Germany have started jabbing children.

Professor Adam Finn, a member of the JCVI and a paediatrician at the University of Bristol, said it was clear myocarditis was primarily a ‘second dose risk’. The 16 and 17-year-olds will initially be given Pfizer jabs because Moderna has not yet been approved for them.

Boris Johnson encouraged families to listen to the JCVI’s advice, saying: ‘They are extremely expert there, they’re among the best, if not the best, in the world, they know what’s safe and I think we should listen to them and take our lead from them.’

Health Secretary Sajid Javid added: ‘The JCVI will continue to review data and provide updates on at-risk groups aged 12 to 15 and whether any additional groups will be added.’

He later confirmed the rollout for those aged 16 and 17 could take place via schools. ‘It will be this month and so the way we’re going to roll this out, I think as people will expect, is working through the clinicians, working through GPs, through the primary care networks,’ he said.

‘Also, we will use hospital hubs, we will use hubs like the one in Bournemouth I visited today – that I was very impressed by. And also we’ll be working through the already existing schools vaccination programme, which I think will help to bolster this.’

But some scientists questioned why the JCVI was not including 12 to 15-year-olds.

Peter Openshaw, a professor at Imperial College London and a government adviser, said: ‘Vaccination of teenagers may have a major effect on the return of Covid next winter, assuming that the rates will drop this summer.

‘Full vaccination takes time, so the sooner we start the sooner this age group will be protected.’ 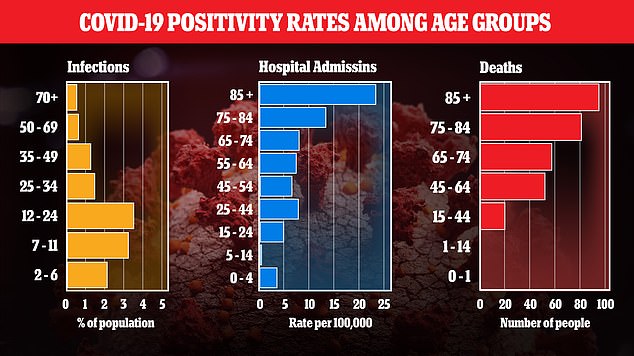 Much-needed, but this may be too little too late, say scientists

By Eleanor Hayward, Health Correspondent for the Daily Mail

Scientists have called for vaccines to be available to younger children immediately – claiming the decision to jab over-16s is ‘too little, too late’.

The group of 18 healthcare experts have written a paper stating the UK is now a ‘global outlier’ because it is not immunising 12 to 15-year-olds. They claim the jab’s benefits ‘clearly outweigh the risks’ in younger children.

The scientists said there have so far been no deaths or serious adverse effects in the nine million under-18s vaccinated around the world.

The paper, which is under review at The Lancet medical journal, added that the position of the Government’s vaccines advisory committee ‘contrasts with the policies of many other countries, including the US, Canada, Israel and much of Europe and south-east Asia, all of whom are currently vaccinating 12 to 17-year-olds’.

They criticised the JCVI’s ‘unacceptable delay’ in approving vaccines for over-16s, warning it means it will not be possible to fully vaccinate older teenagers before schools reopen.

Lead author Professor Christina Pagel, of University College London, said: ‘An opportunity to fully vaccinate students before the start of the next school term has been missed. This same decision even a month earlier would have allowed this.’

Dr PAUL McKAY: I understand parents’ concerns over Covid jab, but vaccinating is the right thing to do

Any parent can be forgiven for feeling perplexed, if not alarmed, by the rapid reversal of the Government’s position on Covid vaccination in the under-18s.

Less than three weeks ago, the Joint Committee on Vaccination and Immunisation (JCVI) ruled out the ‘routine use of universal vaccination of children’ as data suggested the benefits did not outweigh the risks for youngsters.

Yesterday we learned the jab is to be offered to 16 and 17-year-olds after all.

So what is going on and how worried should parents and their teenagers be about the claims and counter-claims on safety? Tens of millions of Britons are now double-jabbed – part of a coronavirus shield that protects us individually as well as those around us. 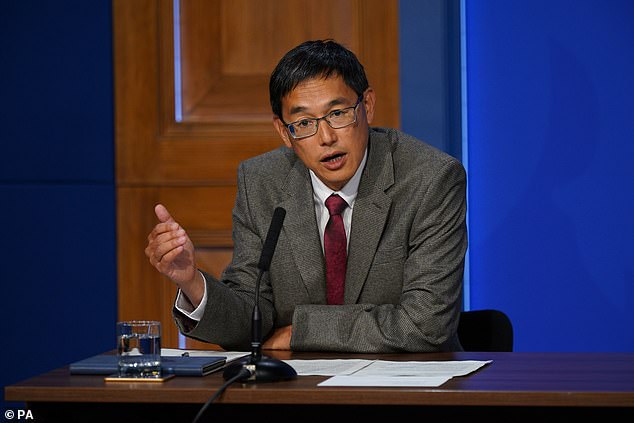 But vaccine availability has largely been limited to adults. That has set us apart from many other countries, including the US, Canada and France, which are routinely vaccinating all over-12s. That does not mean that we are lagging behind. On the contrary, assessing the benefits of vaccinating youngsters against any possible risks is an on-going process.

And now JCVI scientists have analysed further data on vaccine safety and also taken into consideration the impact of the pandemic on school closures.

They are confident that the jab is safe for teenagers and so issued new recommendations.

This is good news. New infections are still flourishing – and largely in younger age groups – fuelled by the emergence of the more transmissible Delta variant. Some people think this doesn’t matter, given that many youngsters appear to be largely asymptomatic and very few suffer long-term effects.

But it matters a great deal because they can still infect others – especially vulnerable individuals, including those who cannot have the vaccine. 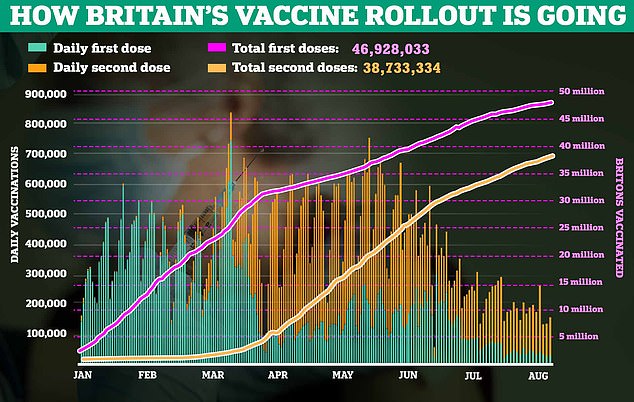 It will also matter a great deal come autumn when schools return. A surge in cases could have serious consequences for the education of our youngsters and wider society.

I understand this decision has been greeted with caution by some parents who worry about potential longer-term consequences. And there is, I know, particular concern about fertility in the wake of reports of menstrual irregularities linked to the vaccine.

Parents – and teenagers – are right to ask questions and they deserve honest answers. But too much of this debate is being played out in the lawless world of social media – often in a post from an anonymous ‘doctor’ or ‘my friend who is a nurse’ or someone from the ‘anti-vax’ movement.

Such accounts have assiduously and shamelessly fed lies and misinformation to the public from the start of the pandemic. This sort of content, steeped as it is in conspiracy and paranoid thinking, can prove more exciting than the dry pronouncements of boring old experts – and it is being lapped up by the young.

Well, I do hope young people and their parents will listen to this boring old scientist when I tell them that all the evidence shows that Covid vaccines are every bit as safe for the young as they have proved in the elderly who were first in the queue many months ago.

And as for fertility concerns, anecdotes and hearsay are no match for clear and rigorous evidence – and our evidence is that the vaccine has no effect whatsoever on the male and female reproductive systems.

What we do know is that the Covid virus can spread to the reproductive organs – it has been found in testicles and ovaries. In other words, any young person who is concerned about their future fertility should, in my view, have the vaccine. Getting jabbed is the right thing to do to protect yourself and others.