EXPRESS INFORMER > Health & Medicine > HEALTH NOTES: How doctors can use an eye test to spot the signs of bowel disease

HEALTH NOTES: How doctors can use an eye test to spot the signs of bowel disease

Doctors may be able to spot the early signs of bowel disease in a patient’s eyes.

People with a specific set of eye complaints are twice as likely to be diagnosed with inflammatory bowel disease, including ulcerative colitis and Crohn’s, experts at the University of Birmingham say.

Earlier research had shown that sufferers of these conditions are likely to have blurred vision, burning or itchy eyes and even blindness, due to inflammation of the eye.

In the study, researchers looked at the records of almost 200,000 patients to see if eye problems could be an early predictor of bowel disease. The reason for the link is not known, but it is believed that genetic plays a role.

People with a specific set of eye complaints are twice as likely to be diagnosed with inflammatory bowel disease, including ulcerative colitis and Crohn’s, experts at the University of Birmingham say

An underactive thyroid may increase the risk of dementia.

The small, butterfly-shaped gland in the neck releases hormones responsible for functions including metabolism and temperature regulation. For roughly 1.4 million Britons, the thyroid is underactive – not producing enough hormone and resulting in a host of health problems such as weight gain and, in worst cases, heart disease.

Now US scientists have found that over-65s with an underactive thyroid are 80 per cent more likely to develop dementia than people of the same age without thyroid problems.

The study, published in the journal Neurology, also found that people who take medication for the condition are three times more likely to develop dementia than those who don’t.

Most people with appendicitis can be treated safely at home with antibiotics, avoiding the need for surgery, a study has found.

The condition is a painful swelling of the appendix, a pouch attached to the intestine. To stop it bursting, it is usually surgically removed as a matter of urgency.

Previous trials had shown that treating patients with intravenous antibiotics in hospital was just as effective. Now researchers have found that antibiotics can be taken at home, with little need for hospital treatment. 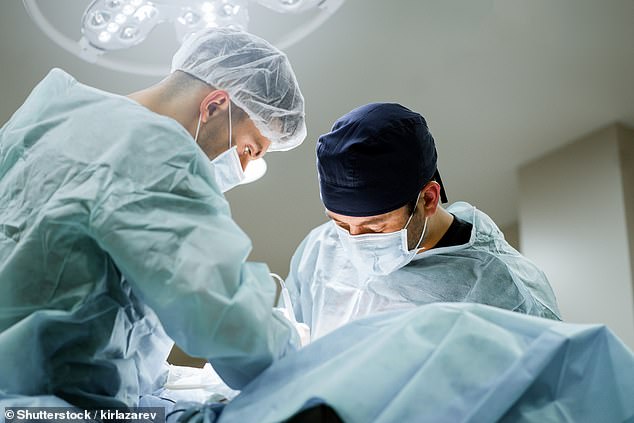 Most people with appendicitis can be treated safely at home with antibiotics, avoiding the need for surgery, a study has found

In a study of 726 appendicitis patients, 46 per cent were discharged within 24 hours to be treated with antibiotics at home. A month later they experienced no more health problems than those who remained in hospital, and were less likely to need surgery.

One in every 100 Britons took part in a Covid drug trial during 2021, new figures reveal.

More than 772,000 people in the UK participated in a total of 308 Covid studies last year, the National Institute for Health and Care Research reported.

The trials included those monitoring the continued effectiveness of coronavirus vaccines and new treatments for severely ill Covid patients. One of the largest was the Panoramic study into the use of so-called antiviral treatments, given to 25,000 vulnerable Britons who didn’t respond well to the vaccines.