Zapping the brain with a mild electric current can help ex-smokers stay off tobacco months after they have quit.

Up to one in five people who wean themselves off cigarettes end up relapsing and smoking again.

But a study at the University Hospital in Dijon, France, found ex-smokers who had regular sessions of external brain stimulation – using a hand-held gadget that sends a gentle current through electrodes attached to the temples – were twice as likely to stay off cigarettes three to six months after stopping than those not having it.

It’s thought the technique works by activating brain cells that dampen down cravings for nicotine.

The machines – known as cranial electrotherapy stimulation devices – are available online from about £150.

Just blow away bugs on planes

If you’re seated directly in front of someone coughing on a plane, you’re more likely that anyone else on board to pick up their illness.

University of Hong Kong researchers tested the spread of droplets generated by coughing while seated on an aircraft. The results, published in journal Travel Medicine And Infectious Disease, showed the highest concentration was directly over the seat in front.

The study also found that if the person in front turns on the overhead ventilation, it instantly reduces the chances of infection. 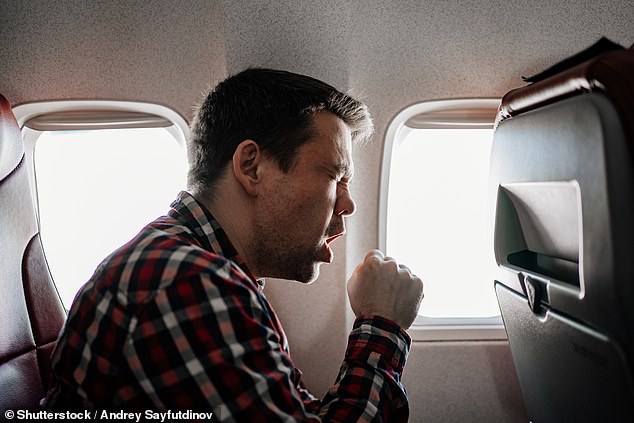 If you’re seated directly in front of someone coughing on a plane, you’re more likely that anyone else on board to pick up their illness

One in five Britons with bowel cancer symptoms are too scared to seek medical help, a poll of 2,000 adults has revealed.

Commissioned by charity Bowel Research UK, the survey was designed to measure the success of a 2021 NHS public awareness campaign on the disease.

Bowel cancer affects 42,000 Britons every year and is the second most common cause of cancer deaths in the UK. However, most respondents were able to recognise the signs of the disease, including blood in stools, abdominal pain, loss of appetite and weight loss.

Lynn Dunne of Bowel Research UK said: ‘If caught early, bowel cancer can be completely cured and is much more easily treated.’

Roaring with laughter isn’t just good for mental health, it can also help you lose weight.

Researchers from Fukushima Medical University in Japan split 230 men and women into two groups. One had regular sessions with a comedian telling jokes as well as yoga classes involving breathing exercises. The rest went about their daily lives as usual.

After three months, the laughter group had lost weight, were less stressed and felt mentally stronger than the others, according to results published in the journal BMC Geriatrics.