Britain’s daily Covid statistics were axed today as the country moves forward to the next stage of the pandemic.

It follows pressure from both Tory MPs and leading scientists, who warned the infection numbers have become hugely unreliable now free Covid tests were stopped for the majority of Britons.

The UKHSA will still publish daily England figures but headline UK numbers — used throughout the pandemic to remind public of situation — will be affected.

The Government is relying on the Office for National Statistics’ (ONS) weekly infection survey, which uses random swabbing, to get a read on the virus’ true trajectory. It also reported a drop last week.

Meanwhile, latest Covid hospital data shows there were 992 admissions for the virus on May 3, down nearly a fifth on the previous week.

Daily hospitalisations have now fallen for four weeks in a row — despite NHS leaders calling for masks and outdoor mixing to return at the start of April. 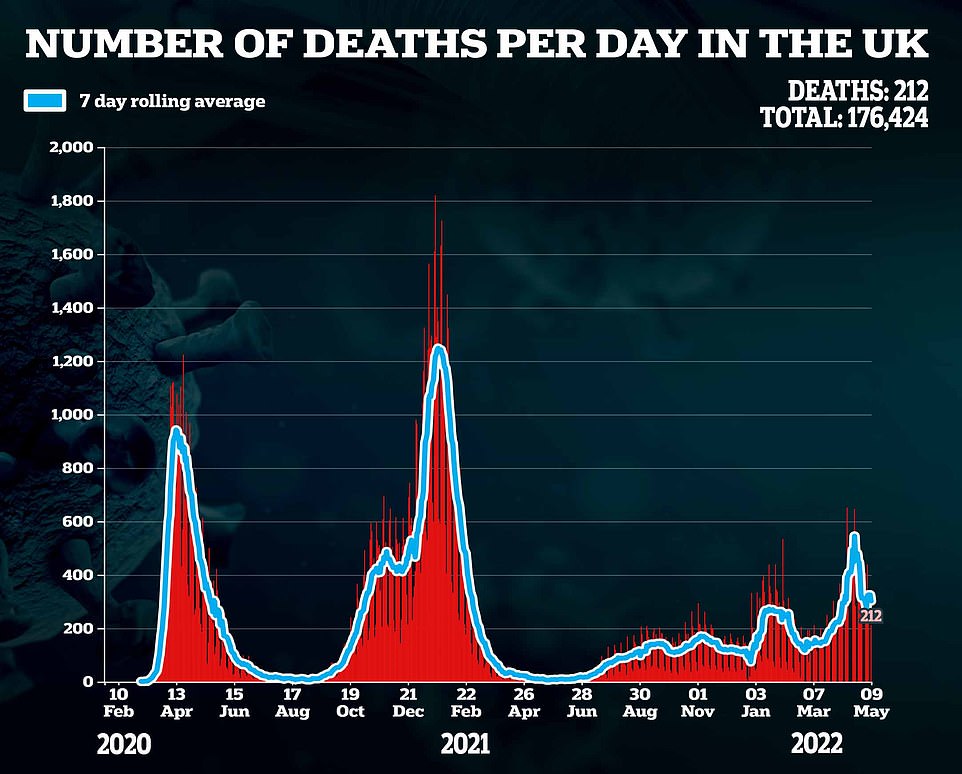 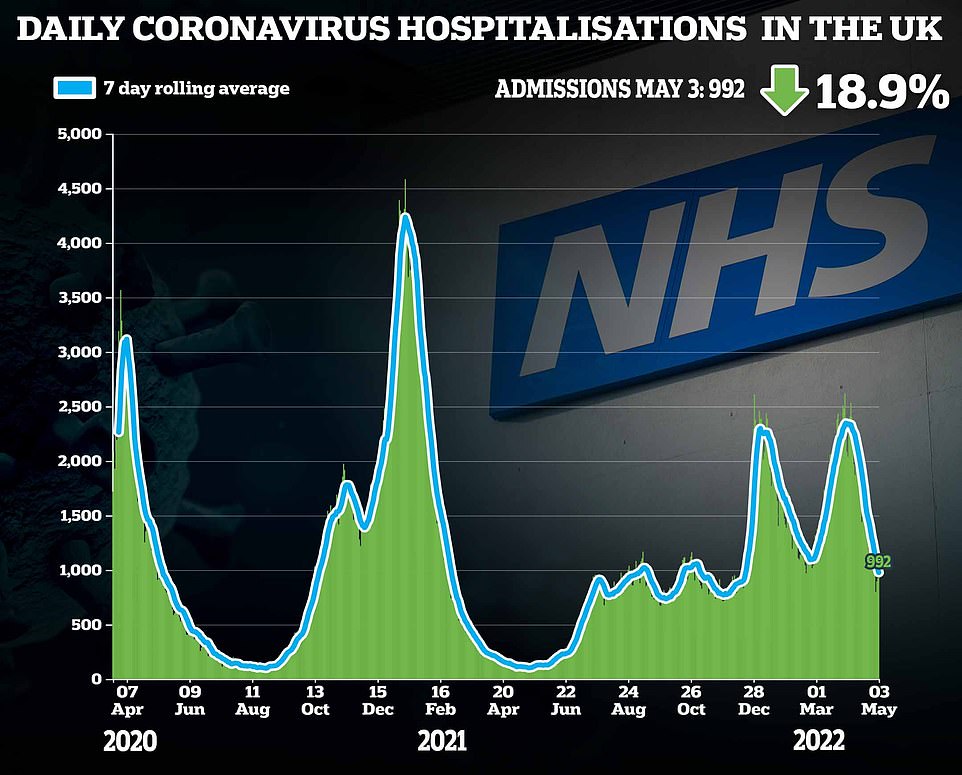 The move to scale-back the UK figures was prompted by Public Health Scotland, where the national Covid dashboard will only be update on Mondays and Thursdays. From June, it will move to weekly updates.

In response, the UKHSA confirmed Covid statistics in the UK are changing, with the UK figures only available on Monday and Thursday.

Clare Griffiths, head of the UK Covid dashboard, said: ‘As we move forward in the pandemic, changes to reporting across the four nations means Covid metrics will be updated on different dates and schedules.

‘Variations in reporting schedules should be considered when looking at reported Covid figures and day-to-day comparisons may therefore be misleading.’

It adds to the fragmentation of the daily numbers, as Wales now only publishes its vaccine data on Monday, meaning UK-wide updated immunisation data is only available once a week.

It comes after Ireland’s Department of Health last month confirmed it will ‘no longer’ publish daily Covid figures. Instead, outbreak figures will be ‘updated regularly’ on the country’s Covid dashboard.

The country’s health chiefs said they will continue to monitor all information relating to the epidemiology of the virus, including case numbers, local outbreaks and trends, as well as the emergence and detection of new variants in Ireland and abroad.

But UK health bosses have insisted that there are ‘currently no plans’ to scrap the daily numbers. Data for England continues to be published daily under each topic area — testing, cases, healthcare, vaccinations and deaths.

It comes as the Labour leader Sir Keir Starmer vowed to quit if he is fined by police over the Beergate scandal.

The police have announced they are investigating a boozy curry event involving Sir Keir and several Labour staffers, including deputy party leader Angela Rayner, in April last year – when the country was in lockdown.

He insisted he is ‘absolutely clear’ no rules were broken and he believes in ‘honour and integrity’ – saying he is ‘very different’ from Boris Johnson.

Sir Keir said he had self-isolation six times, and obeyed the rules when his father-in-law was ill, suggesting even his opponents did not really believe he would have breached them in Durham.

‘If the police decide to issue me with a FPN I would of course do the right thing and step down,’ he said – although pushed by journalists he declined to say what he would do if police merely rebuke him publicly.

Angela Rayner echoed Sir stance, saying in a statement: ‘If I were issued with a fine, I would do the decent thing and step down.’

The intervention – which raised the prospect of Labour being left without either of its two top politicians – came after a day of building tension, which saw Sir Keir cancel a think-tank event where he would have been grilled by journalists and ignored questions as he left his London home this morning.

He has agreed with senior figures urging him to get on the front foot by committing to resign should Durham Police find he broke Covid rules.

The strategy is high-risk but could potentially leave Sir Keir in a strong position if police do not issue a penalty – while allies suspect he would need to go anyway were he to receive a fine.

‘There’s a clear logic to it,’ one of Sir Keir’s supporters told The Times.

‘It would give him something to say at the (House of Commons) despatch box when Johnson raises it.’

The Labour leader’s efforts to keep a lid on the row had been dealt a further blow today with allegations that people were ‘p*****’ at the gathering in Durham last year.

Meanwhile, the furore is threatening to spread further with Sir Keir’s office accused of sending out invites to around 40 Labour advisers for a Christmas party in December 2020, when London was under Tier 2 restrictions.

The bash was only cancelled when the capital was upgraded to Tier 3.

Responding to the latest claims – reported by Politico – Labour insisted the gathering would have been allowed under the rules, as it was intended to be at an outdoor venue and with tables limited to six people.

However, the party has previously criticised the government for holding similar functions.

MailOnline understands the festive bash was due to be held at a rooftop west London venue offering ‘boozy cheese fondue, hot toddies and heaters’.

The outdoor covered venue was described as looking like ‘a winter forest against backdrop of snow-covered hills’ and with ‘a Bavarian-style hall with eight cosy Moët & Chandon winter lodges with a private bar and cosy blankets’.