Professional recruiter Robert Walters has seen profits skyrocket following record trade in December and a worldwide shortage of job applicants, which its finance boss has said has led to the largest wage hikes he has seen in two decades.

Net fee income at the group jumped by 39 per cent year-on-year on a constant currency basis to £95.1million in the fourth quarter, thanks to impressive performances across all regions and all categories of recruitment activity.

The Asia-Pacific region, its largest market, provided the bulk of this growth with a 56 per cent rise in gross profits even though strict lockdowns impacted some Asian countries during the period.

Labour power: Many Britons have used the opportunity brought by worker shortages to move to different jobs and starting salaries for graduates have been bumped considerably

Fee income also grew strongly in Europe, soaring by 36 per cent to £27million with Germany, Belgium, Spain and the Netherlands all individually recording growth of 40 per cent or higher.

By comparison, its domestic UK market registered an increase of just £1.1million in gross profits despite the firm saying it benefited from fierce competition for jobs in industries such as law, commercial finance and technology.

Robert Walters said the competition to hire new candidates in the UK and Asia has led to much larger salaries being offered by companies.

Chief financial offer Alan Bannatyne said the salary hikes were the ‘highest I’ve seen it in my 20 years at Robert Walters,’ with businesses lifting their pay packages by at least 15 per cent and some by up to 50 per cent.

He told the Evening Standard that one auditor in London had seen their open vacancy levels swell from 600 during the summer to 900 just six weeks later, while the number of legal openings in the British capital had shot up by about 90 per cent.

‘It takes three years to train a lawyer, potentially hiring volumes were reduced during Covid, and actually, maybe we have had some people during the ‘Great Resignation’ who have decided they are going to change career progression,’ he remarked. 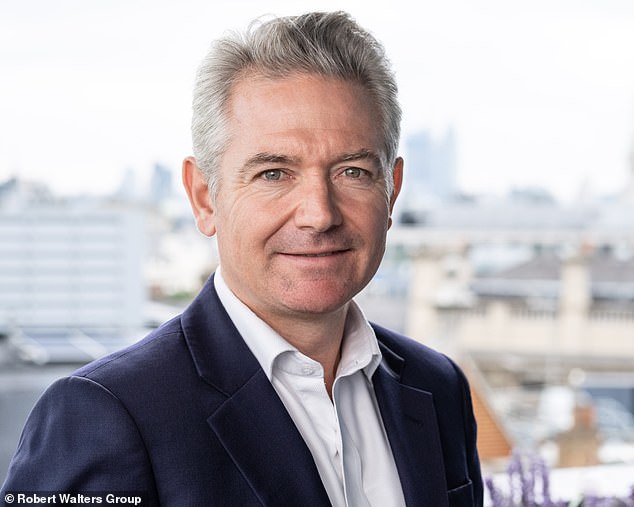 Skyrocketing wages: Alan Bannatyne, the chief financial officer of Robert Walters, said the salary hikes at businesses were the ‘highest I’ve seen it in my 20 years at Robert Walters’

Back in July last year, the headhunter noted that it was ‘commonplace’ for some white collar firms to be hiking salaries by 20 to 30 per cent for certain positions amidst an employment market where there was a ‘war for talent.’

The dearth of professional workers was blamed by Robert Walters on the coronavirus pandemic, decreasing immigration levels and labour mobility, and is particularly affecting countries like the United Kingdom.

Job vacancies hit a new record high of 1.22 million in the UK over the three months to November 2021, according to the Office for National Statistics, a surge of 434,500 on pre-pandemic volumes.

Virtually all industries have been impacted by worker scarcity in the UK, but the sectors with the highest number of vacancies include manufacturing, human health, and social work and hospitality.

On the upside, many Britons have used the opportunity to move to higher paying jobs and starting salaries for graduates in professional sectors have been bumped up to considerable levels, particularly within the legal profession.

This came after Simmons & Simmons boosted their yearly salary for newly-qualified lawyers to £100,000, whilst the equivalent person at Baker McKenzie will now get £105,000 and those at Rose & Gray will earn a massive £147,000.

Shares in Robert Walters were 2.6 per cent higher at 830.8p during the late afternoon on Tuesday and have risen about 80 per cent over the last 12 months.