Getting insider knowledge on the pretty little Greek port of Loutro from Dave was a stroke of luck. He’s the kind of tourist you really want to cross paths with — a chatty English holidaymaker who visits this blue-and-white fishing village in rural southern Crete every year.

Dave is right to say that Crete is a beautiful ‘last blast of sun’ destination, staying hot well into October. How could it fail? It’s the southernmost major holiday island in Greece. EasyJet and BA fly here until late in the season.

Dave knows his onions when it comes to eating out, recommending the delicious — and affordable — moussaka at The Old Phoenix. And that’s just for starters.

Nick Redman explores the pretty little port of Loutro, pictured, on a tour of the unspoilt hamlets and isolated strands of Crete’s South-West coast

‘Go to Stratis, behind the church,’ he tells me, when we next bump into each other. ‘It’s the best food in Loutro. They barbecue the chicken souvlaki in front of you — and they do the best chips in Greece.’

The food from the grill is juicy and this family run restaurant is generous with the orange cheesecake as well as the free raki.

As the day fades to pink then grey over the horseshoe harbour I think, ‘Why doesn’t everyone come here?’ Then I think, ‘What a relief so few do.’

It is uncrowded and so devoid of high-rise package hotels — rather like the Mediterranean of 30 or 40 years ago.

Loutro is one of a string of unspoilt hamlets and isolated strands along a 20-mile stretch of the South-West coast. It isn’t a place for culture cravers, so don’t come for historic sites or museums. You’re here for a holiday filled with transparent shallows, unfussy tavernas and lurid sunsets that will make you feel carefree and 25 again. 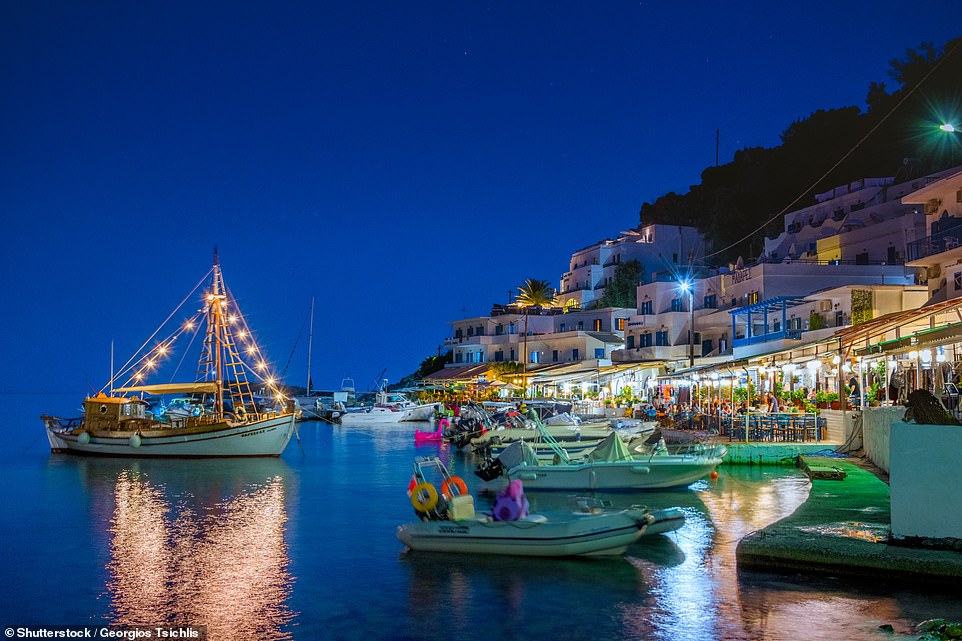 ‘It is uncrowded and so devoid of high-rise package hotels — rather like the Mediterranean of 30 or 40 years ago,’ Nick says of Loutro

So where’s the catch? There isn’t one. It’s just that this part of Crete can’t be developed easily — sheer flanks fall away to the sea, leaving practically no room for roads or resorts, just little time-warp beach towns served by boats and ferries.

Fly to Chania rather than Heraklion and hop on a bus (£15) south.

In an hour and 45 minutes, after a final Scalextric descent from the Lefka Ori (White Mountains — the spine of western Crete), the tiny port town of Hora Sfakion emerges. Here my odyssey begins. The waterfront restaurants are happy but not hectic. I have two days here, although I could live here for a year — double-balconied rooms at Samaria By The Sea cost £90 a night and have fridges for Mythos beers bought at a mini-market.

Vrissi, the cove here, is reached by steep steps, with rental loungers to laze away the days. It has a blue swell that, after an hour’s swimming, makes me hungry. 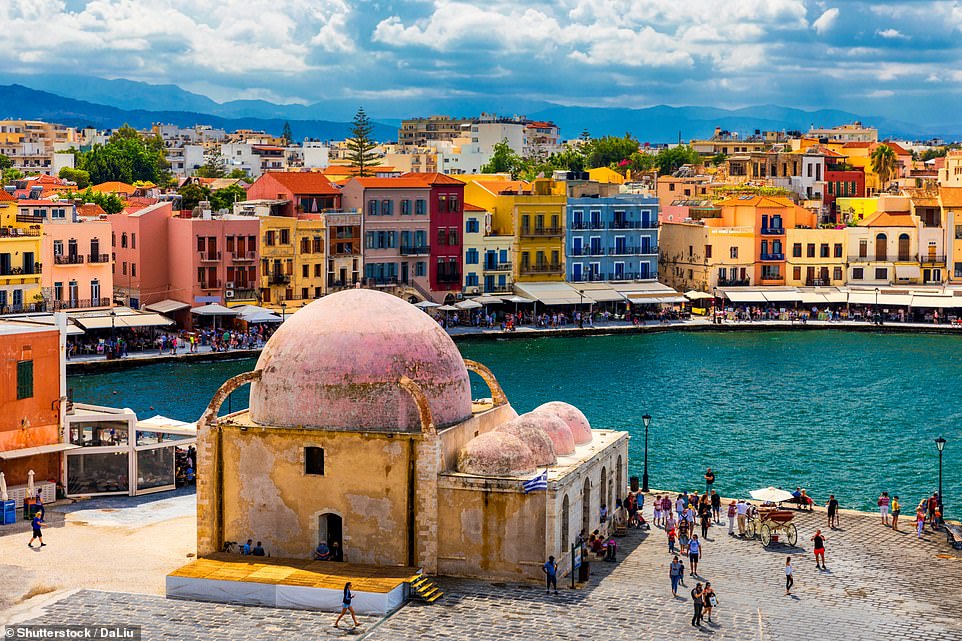 To best explore Crete’s South-West coast, fly to Chania (pictured) and hop on a bus south 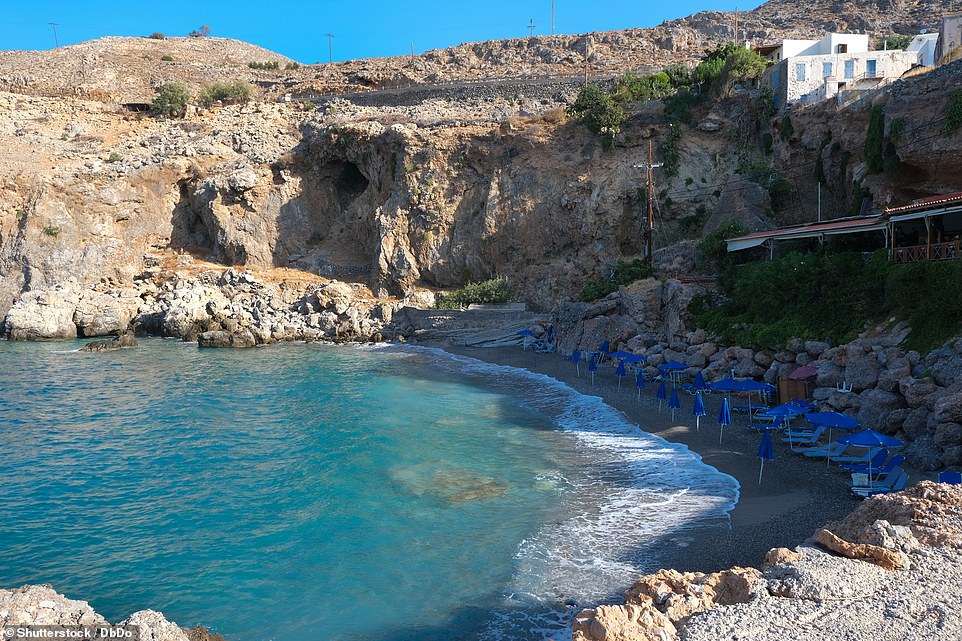 Vrissi (above), the cove by the tiny port town of Hora Sfakion, is reached by steep steps, with rental loungers to laze away the days

Time to hit the Three Brothers taverna, framed by pink rhododendrons, above the beach. The Greek salad has a whole paving slab of delicious feta.

When I move on to Loutro, I stay just around the headland at The Old Phoenix, walking back over the eerie promontory for nightcaps beside Loutro’s harbour waters. The Old Phoenix is a fairly unreconstructed pensione, but it’s perfection for the price: family run, intimate and presiding over its own deep, silent bay, with kayaks you can take out.

Hikers walking the southern coastal path check in — doubles start at £50, or £45 if you pay cash — and breakfast toast with honey on the terrace is a rarefied moment; ditto dinner, under a Biro-blue sky with stars. 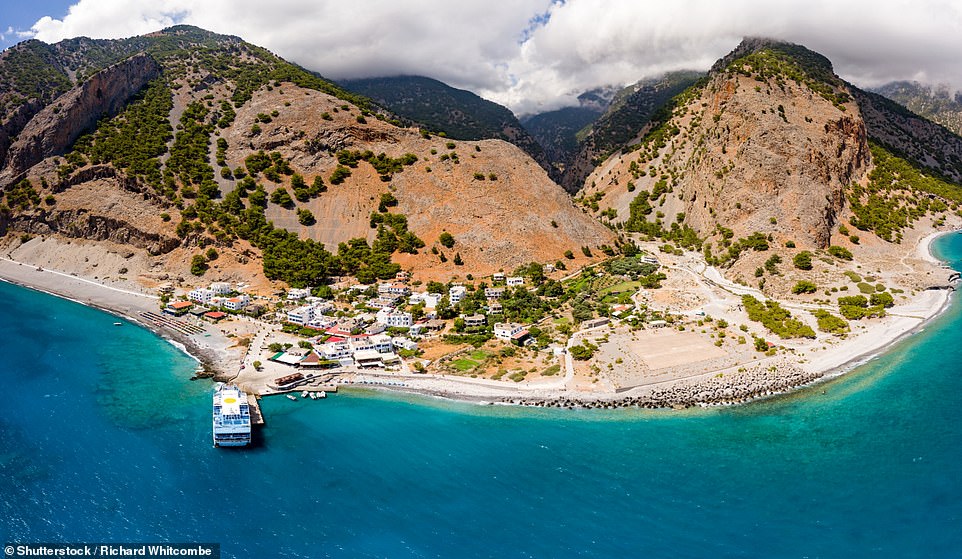 At Agia Roumeli, pictured, Nick sees ‘hot and bothered hikers throw themselves into the cooling shallows’ 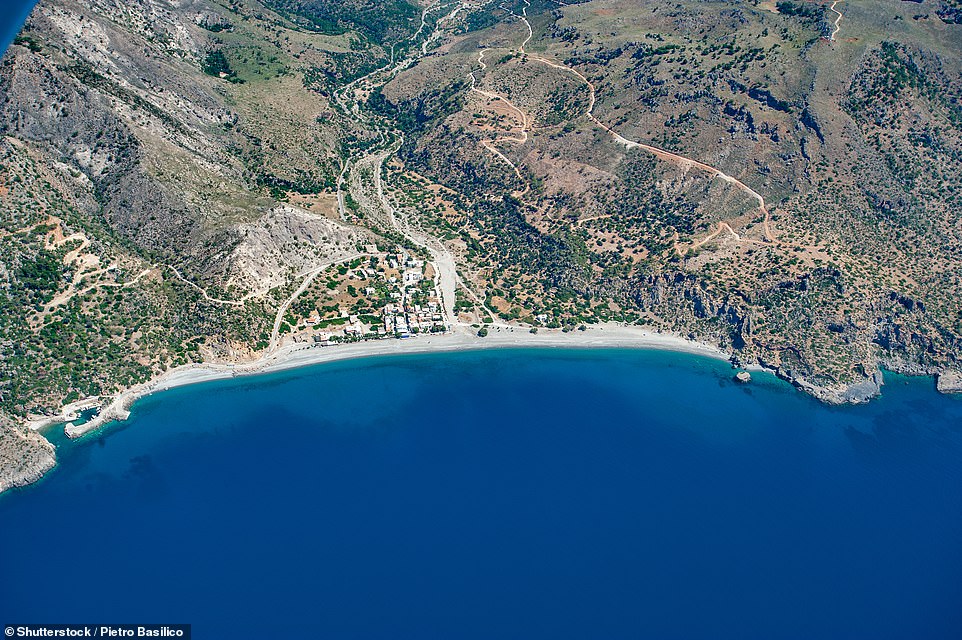 An aerial view of Sougia, Nick’s final destination, where he enjoys ‘cool swims off the beach’ and ‘sea-bass lunches’

Sunvil (sunvil.co.uk) has seven nights’ self-catering in Loutro from £1,156 pp, based on two sharing, including flights from Gatwick on October 18, 2022.

Tiny motorboats call in to take guests west for 20 minutes to Marmara beach, with its aquarium-clear, bouldery shallows; or east, to Sweetwater, where nearly the only signs of life are the goats — and Yorgos, who runs the informal Mermaid Taverna, set over the water.

I couldn’t feel further from the luxury resorts of the north as I sit here peacefully beside the Libyan Sea, with North Africa over the horizon. I feel almost sorry to be heading further west tomorrow to Sougia, and the end of my trip.

I needn’t have worried. The 90-minute voyage there is a breezy break in itself, on a flat-bottomed multi-deck car ferry.

I buy a chilled beer and crack it open as the shoreline changes. Here and there, Orthodox churches cling to rocks, tiny and pastel-pale as Mr Kipling French Fancies. Now and then we shudder into a small port.

At Agia Roumeli, hot and bothered hikers throw themselves into the cooling shallows. Finally, we reach Sougia. The owners of my white, cubic apartment leave free wine and raki in the fridge, and I lie in before rising for long, cool swims off the beach.

There are sea-bass lunches and wine-laced conversations with guests at the next table. We agree never to tell a soul about this stretch of southern Crete. Oops, too late. I just have.