An eight-year-old boy has become the youngest person to successfully climb El Capitan – a 3,000-foot cliffside in Yosemite.

Sam Baker, of Colorado Springs, Colo., has been climbing since he was two years old and has been training to climb El Capitan since he was six.

On Friday, the boy’s father, Joe Baker, posted that the four-person climbing team had made it safely to the top of the cliff.

‘What an amazing week! I’m so proud of Sam. He completed the youngest rope ascent of ElCap!’ wrote Baker on his Facebook page, which he has been using to document Sam’s trek.

‘In a few years he might be back breaking more records.’ Joe faced criticism from some for letting his young child scale the huge – and often sheer – peak. But he insists Sam – whose middle name is ‘Adventure’ – is a dab hand at climbing, and that the youngster knows how to do so safely.

Sam, his father and their group celebrate the completion of the ElCap ascent with a clifftop disco ball. Saturday they will descend eight miles down the mountain 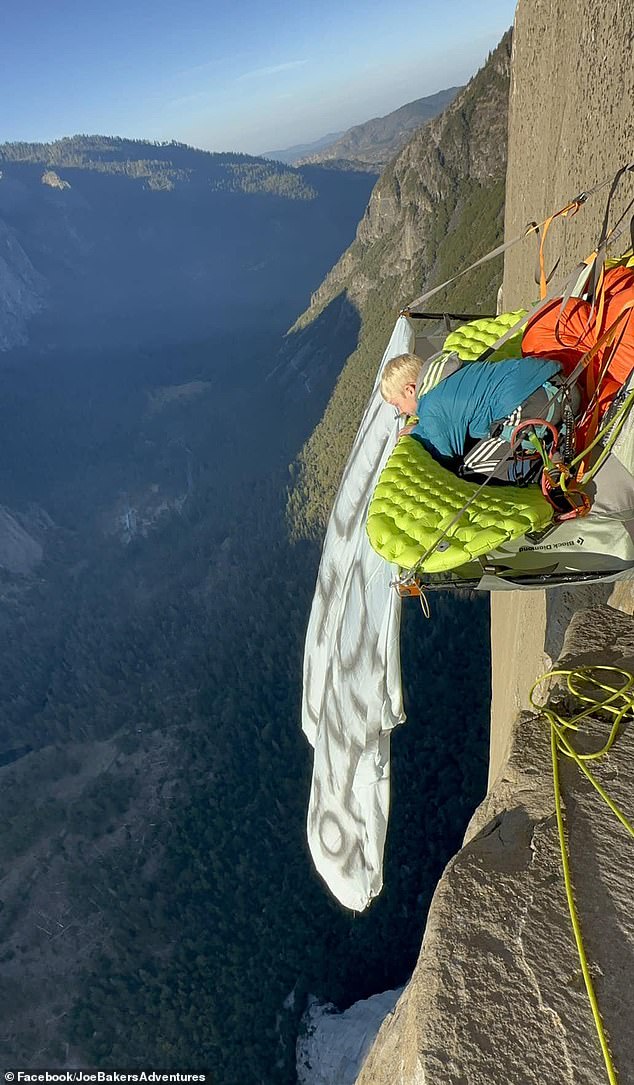 As the group reached the top of the cliff, Sam draped a sign off the side of the structure that read, ‘I love you, mom, almost there’ 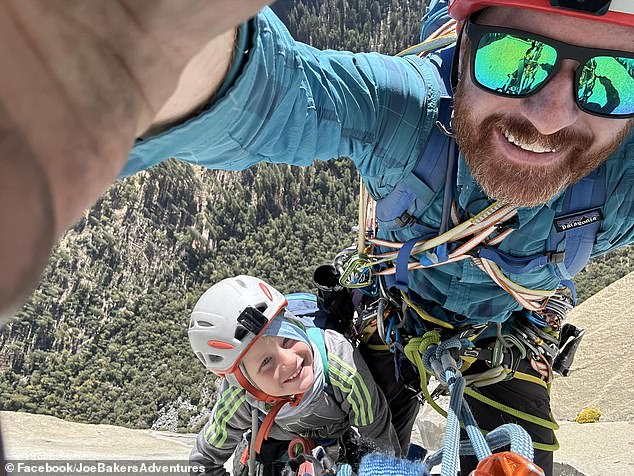 Sam, 8, and his dad Joe were part of a four-person climbing team that summitted the cliff this week. They met up with Sam’s mother – Ann – at the top 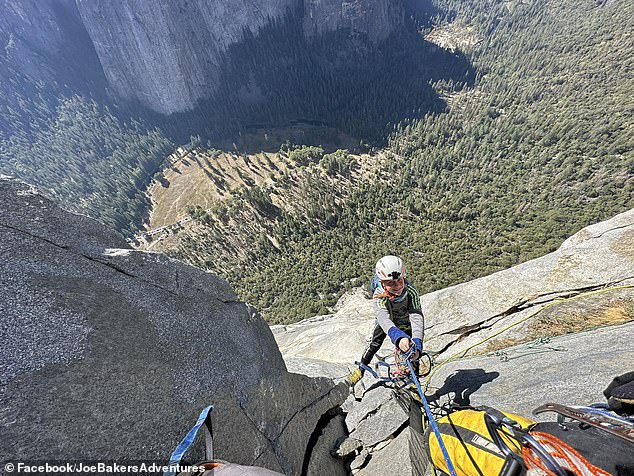 Sam has been training for the cliffside journey since he was six, according to his parents and was in a climbing harness since before he could walk

Earlier on Friday, the father-son duo hung a sign off the cliffside that read, ‘I love you, Mom, almost there.’

His mother had previously told CNN that Sam ‘seems really happy to be up there and spirits are high.’

The climb started Tuesday and concluded with the team meeting Sam’s mother, Ann, who hiked up the back of the mountain, at the top.

The practically straight-up cliffside is 3,000 feet of granite, where climbers are ‘hanging by their fingertips or their anchors,’ Sam’s dad, Joe, said.

Despite the young boy’s bravery and excitement, critics slammed his father for allowing Sam to perform such a ‘dangerous’ stunt at a location that sees more than 100 accidents per year.

El Capitan is largely regarded as a stunt only experienced climbers should risk, but Sam seems confident that his tri-weekly training will pay off for this difficult climb.

Sam, however, was enticed by the idea of enjoying lasagna from a hammock on the cliffside. 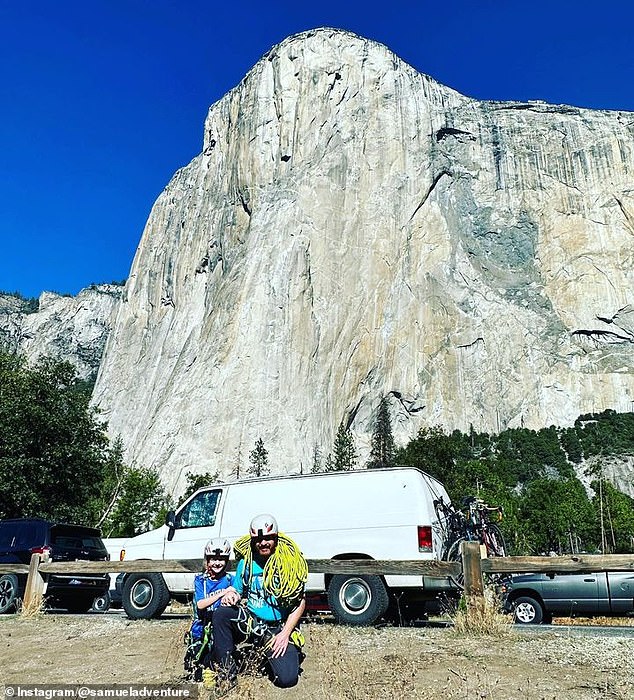 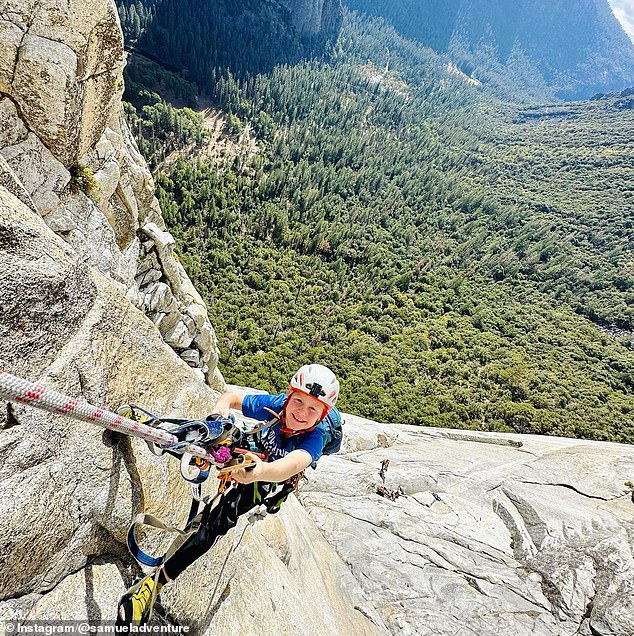 If Sam completes the challenge, he will be the youngest person to reach the summit. The young climber said he’s most excited about eating lasagna and sleeping cliffside (pictured: Sam on El Capitan) 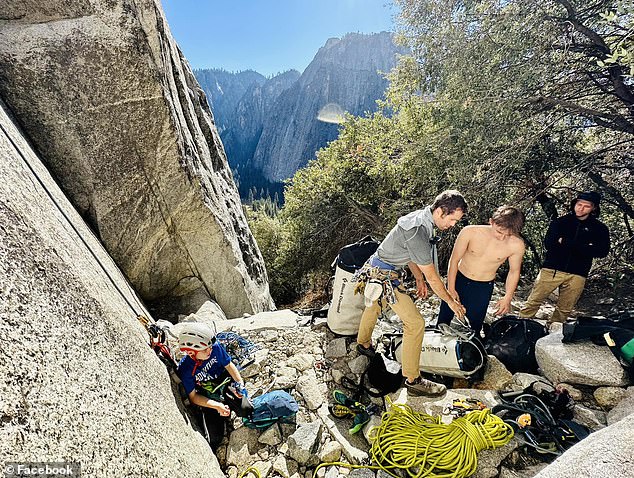 The group (pictured) are about a third of the way up, as of Wednesday morning. The entire climb is expected to take four or five days 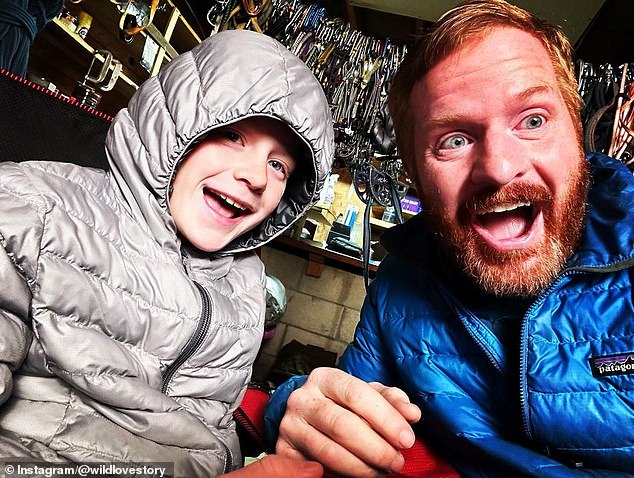 ‘They’re essentially using the protection in order to ascend the wall,’ she told the outlet.

‘The most common and the most often [used] one is called aid climbing, which is when you use ropes and protection. You’re actually using those things in order to aid your ascent up the wall, and that’s been done by probably thousands of people.

‘If he’s stoked to be up there and have an adventure with his dad, I see no [issue] with it at all in terms of safety and risk. It’s not a dangerous form of climbing.’

Harrington, who started rock climbing when she was 10, said regardless of how they ‘choose to climb,’ El Capitan is a ‘wonderful adventure, no matter how you do it.’ 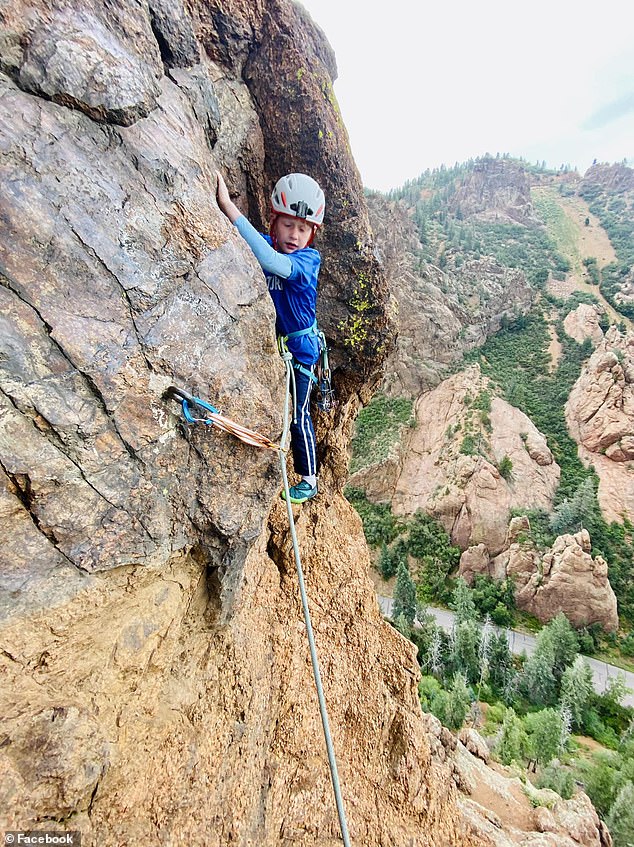 Sam has trained on multiple other mountains (pictured) leading up the climb, which is usually only done by experienced climbers 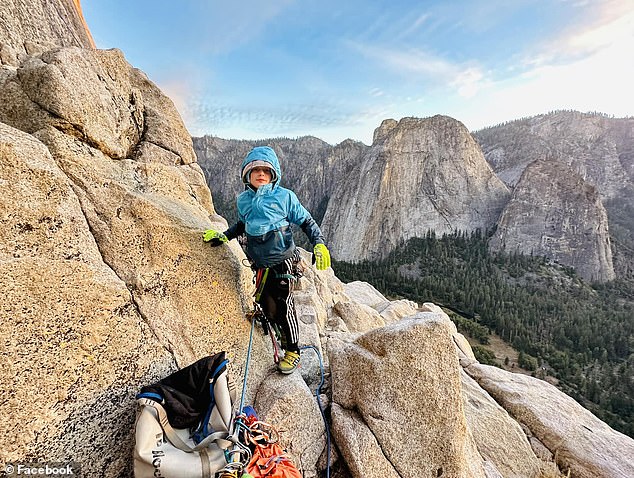 Despite Sam’s enthusiasm, critics have slammed his dad for allowing him to do the dangerous climb, which sees about 100 accidents a year 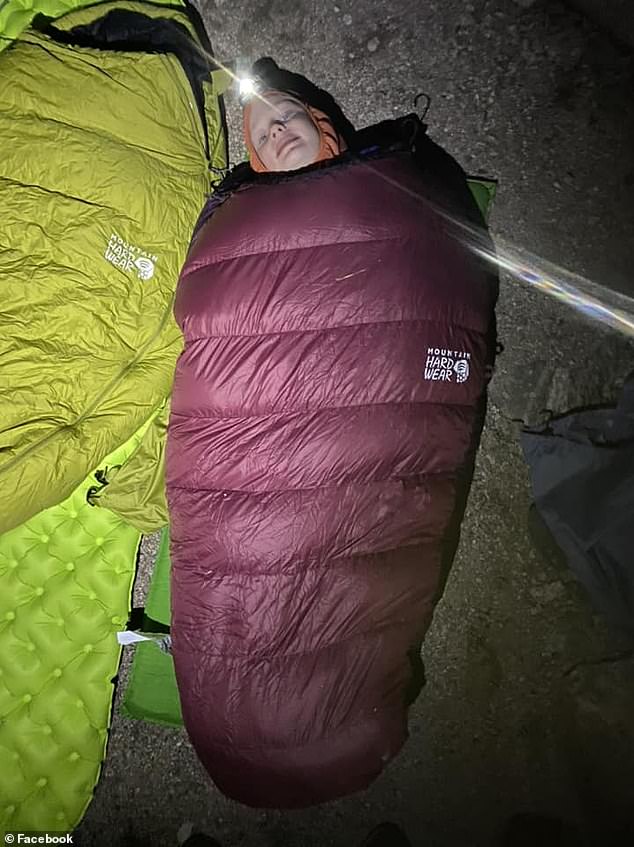 His father argues that they are climbing it was ‘safest’ way possible and that Sam (pictured on a different excursion) will never not be in his harness, even while sleeping, eat, and using the restroom

The youngest person to ever reach the mountain’s summit was Selah Schneiter, then 10, in 2019.

Joe said in a video posted to his Facebook that Sam ‘knows this is going to be really, really hard and he needs to train for it.’

‘We trained for it every day,’ Joe said, accompanied by a video of his young son scaling down the side of their house and climbing indoor rock walls.

Joe also said there was ‘never be a moment’ where Sam is unclipped from his harness, not even while he is eating, sleeping, or using the restroom. 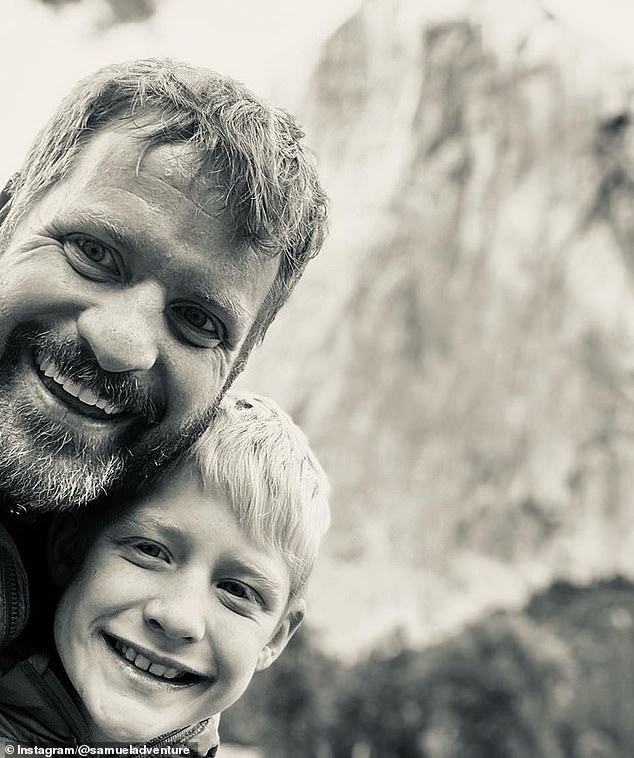 Joe is also using climbing to help teach Sam how to be a man and said he is ‘proud’ to see ‘this identity emerge that he owns, that’s his. To see the warrior spirit coming out of him, he wants it, he’s interested in his own self-mastery’

His mother, Ann, also said they ‘wouldn’t just push him to do it just because he has to be eight when he does it.’

‘It’s OKif we don’t make it,’ Joe said in the video he posted to his Facebook. ‘It will still be a lifechanging adventure that we will forever be talking about.’

Just hours into his climb, Sam posted a picture of himself hanging from ropes off the steep cliffside, writing: ‘Underestimate me! Cause I need a good laugh.’

By Wednesday morning, Sam, Joe, and their friend Maison DesChamp were about a third of the way up, where they stopped near Mammoth Ledge to enjoy ‘mac and cheese and watched the first half of the Lion King,’ his father said on his Facebook page.

‘Now it’s starting to get very cold but Sam can’t tell because he’s sawing logs in his mummy bag cuddled up next to me,’ Joe wrote.

Sam and I are going up El Capitan on October 24th! Sam has had it in his mind to climb this wall for the last two years. And we are finally here. Together we will spend at least four days and three nights living on the wall…the entire time hanging either our fingers or our anchors. Just imagine walking for a mile of sidewalk on your fingers, but strait up. But then we also have to drag up everything that they need to live, including hundreds of pounds of just water. This will be a historic achievement for an 8 year old. Watch this in HD! Follow us on our adventure of a lifetime. The best way to cheer us on is to give us your encouragement and share our story. 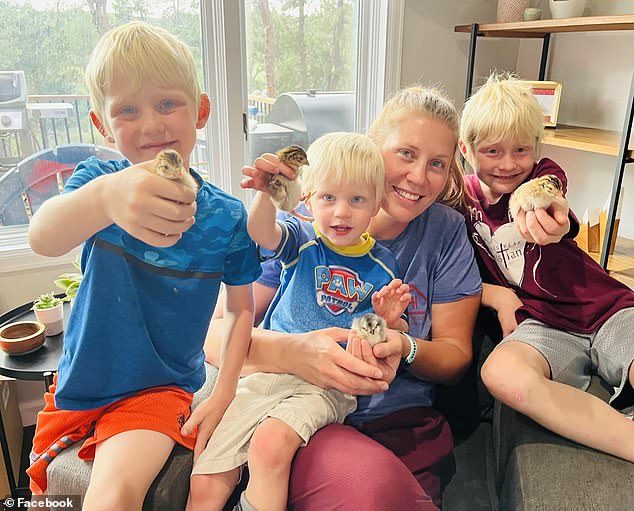 Sam is the oldest of three and his mother Ann (pictured together) will meet the group at the summit. She will be hiking up the back of the mountain

A large part of climbing for Joe is using it as method to help ‘initiate’ Sam into ‘manhood.’

‘How does a boy become a man, it’s such an important question,’ the father-of-three wondered. ‘The answer is initiation. Elementary school doesn’t do it, you know? He gets invited in on some big adventures with his father. As parents we can create that environment – fully architect that environment – were our children can actually find great courage and strength.

‘It’s not about him being a rock climber…What we’re really seeing happening here is seeing this identity emerge that he owns, that’s his. To see the warrior spirit coming out of him, he wants it, he’s interested in his own self-mastery.

‘As a father, I’ve very proud to see it,’ Joe said in the video. ‘This is one of those moments that he will remember. I want that for him.’

El Capitan is the ‘ultimate challenge’ for climbers

The mountain is 2.5 times bigger than the Empire State Building and three times as high as the Eiffel Tower.

Standing more than 3,000 feet above the valley floor, it’s one of the world’s hardest climbs to complete.

The rock was once thought to be impossible to climb, but has since been climbed by many and been the subject of several movies.

There are various ways to climb El Cap, including free climbing and aided and an array of routes to take.

Many take ‘The Nose’ route, including then-10-year-old Selah Schneiter, who completed the climb in 2019. She is the current titleholder for youngest to climb it.

Another more beginner friendly routes include the Salathe Wall, while the Tempest is one of the hardest.

The first ascent on The Nose was in 1958. Despite being one of the easiest routes, almost half of the reported incidents on the mountain occur on that route.

The mountain sees around 100 accidents per year and 30 fatalities have been recorded as of 2018.

In 2018, two climbers – Tim Klein, 42, and Jason Wells, 46, of Boulder, Colorado – plunged to their deaths. Experts suspect they forgot to attach a rope to an anchor while using a risky technique, known as simul-climbing, which increases speed.

‘It was very traumatic,’ a witness told the Seattle Times in 2018.